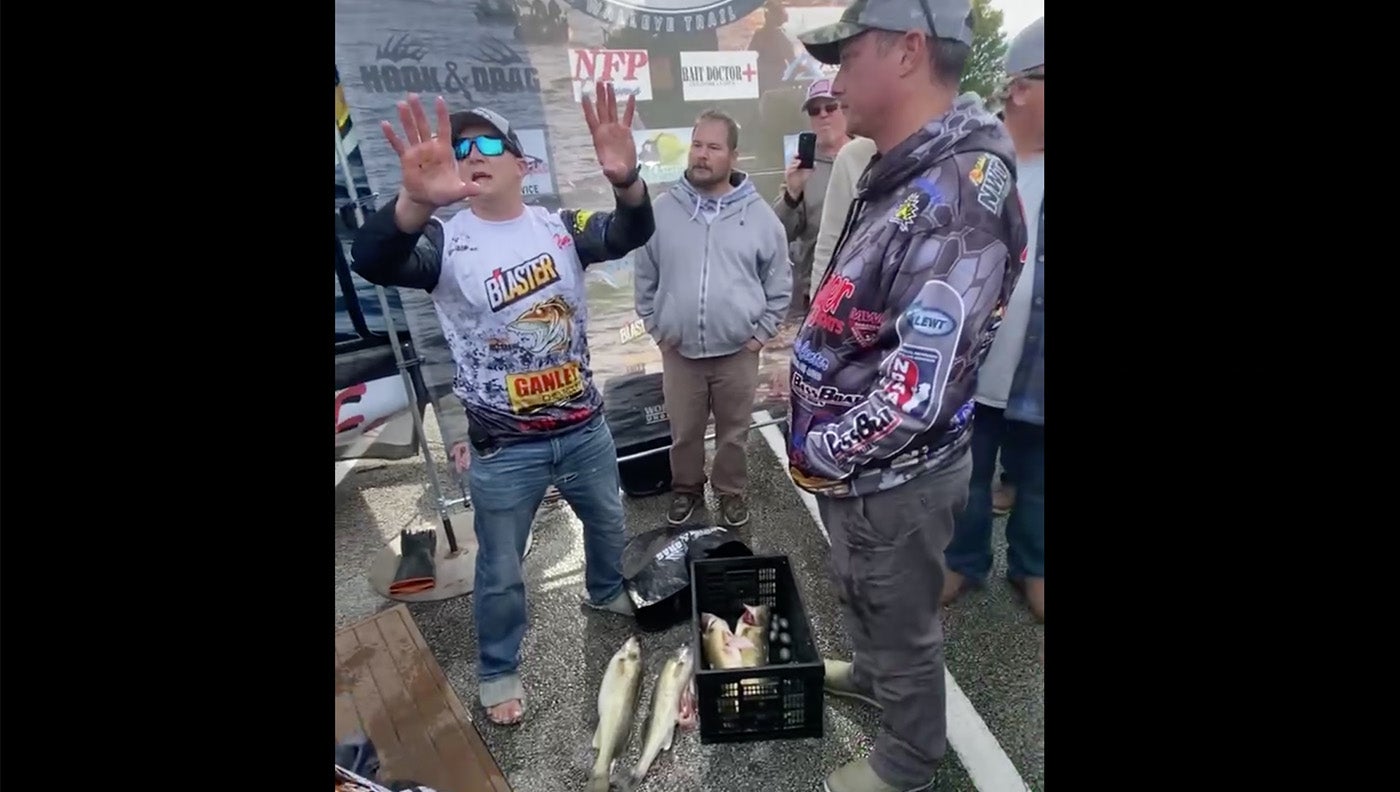 Fellow anglers yelled at the cheaters after they were caught red-handed. Chuck Earls
SHARE

By now you’ve probably heard about the Ohio walleye tournament that set the world of professional angling ablaze on September 30. If you haven’t, here are the details: Two successful pros from the Lake Erie walleye fishing circuit are in serious hot water after they cheated during a weigh-in and got caught red-handed in front of a throng of angry spectators and fellow tournament anglers.

After an investigation by the Ohio Department of Natural Resources and the Cuyahoga County Prosecutor’s Office, Jacob Runyan, 42, of Broadview Heights, Ohio, and Chase Cominsky, 35, of Hermitage, Pennsylvania, were hit with felony charges of cheating, grand theft, and possessing criminal tools. They were also charged with unlawfully owning wild animals, which is a misdemeanor, according to the Associated Press.

The whole ordeal has been covered by such national outlets as the New York Times, CBS, and the Washington Post—just to name a few. F&S obtained exclusive video footage from a kayak fisherman who was at the weigh-in when the chaos ensued.

Runyon and Cominski stood to win as much as $30,000 in prize money and a “Team of the Year Award” when Jason Fischer, director of the Lake Erie Walleye Trail Tournament series, became suspicious of their day’s catch. After asking the anglers to pose for photos with their fish, Fischer called Runyon back over to the weigh-in table so he could have another look, and here’s what happened next.

For anyone with sensitive ears, please note that the video below is littered with F-bombs.

Fischer made the discovery in dramatic fashion, slicing into the walleye bellies with a knife and yanking out multiple egg-shaped sinkers that the duo had shoved down the throats of the fish. By the time he was done examining their catch, he’d extracted a total of ten lead weights and several fish filets.

According to tournament angler Chuck Earls, who competed in the event from a kayak and attended the weigh-in, both Cominski and Runyon have been suspected of cheating before. Earls is a kayak fishing guide on Lake Erie and the creator of the Lake Erie Walleye Trail Kayak Fishing Division.

He said Cominski was disqualified from a fall walleye tournament last year after a failed polygraph test. “At the beginning of this year, somebody warned me about them and said they heard they were stuffing worms down fish before weigh-ins,” Earls says. He suspects that the men added the fish filets in order to mask the unnatural appearance, feel, and sound of the lead. “Out of five fish they had eight pounds of lead,” he says. “I think the walleye filets were maybe to keep the lead from clanking, or maybe to keep the fish from throwing it up.”

Cominski and Runyon eventually left the scene of the weigh-in, but Earls says they didn’t go quietly. “They were flipping us all off as they drove away,” he says. “They showed no remorse whatsoever. Some of the other guys got screwed out of a $130,000 fishing boat and were spending $300 to $400 in gas alone to fish this tournament. So I can see where all the emotion [in the video] came from.”

Read Next: Professional Bass Fisherman Sentenced to Prison for Poaching Paddlefish in Mississippi

After the chaos of the weigh-in died down and the rightful winners claimed their prize money, officials with the Ohio Department of Natural Resources (ODNR) showed up to investigate the incident. In an official statement provided to F&S via email, ODNR public information officer Stephanie O’Grady said that officers collected evidence and prepared a report for the Cuyahoga County Prosecutor’s Office.

According to FOX 8 Cleveland, that report and the subsequent investigation led to the seizure of a boat and trailer from Cominski’s Hermitage, Pennsylvania home, on Tuesday, October 11. According to an affidavit obtained by the local media outlet, both the boat and the trailer were used in connection with the men’s crimes. The disgraced anglers will be arraigned on October 26. For their combined felonies, they could face up to 12 months in prison and fines of $2,500 per offense, reports the Toledo Blade.

Earls says that he hopes Runyon’s and Cominski’s bad actions don’t completely outshine the community-oriented nature of the Lake Erie Walleye Trail tournament series. “After they left, we came together and finished the event off right,” he says. “There’s always a silver lining. I think this is going to bring us closer together as a community and a league. And maybe it’ll bring about some changes in the tournament world that will deter this kind of cheating in the future.”