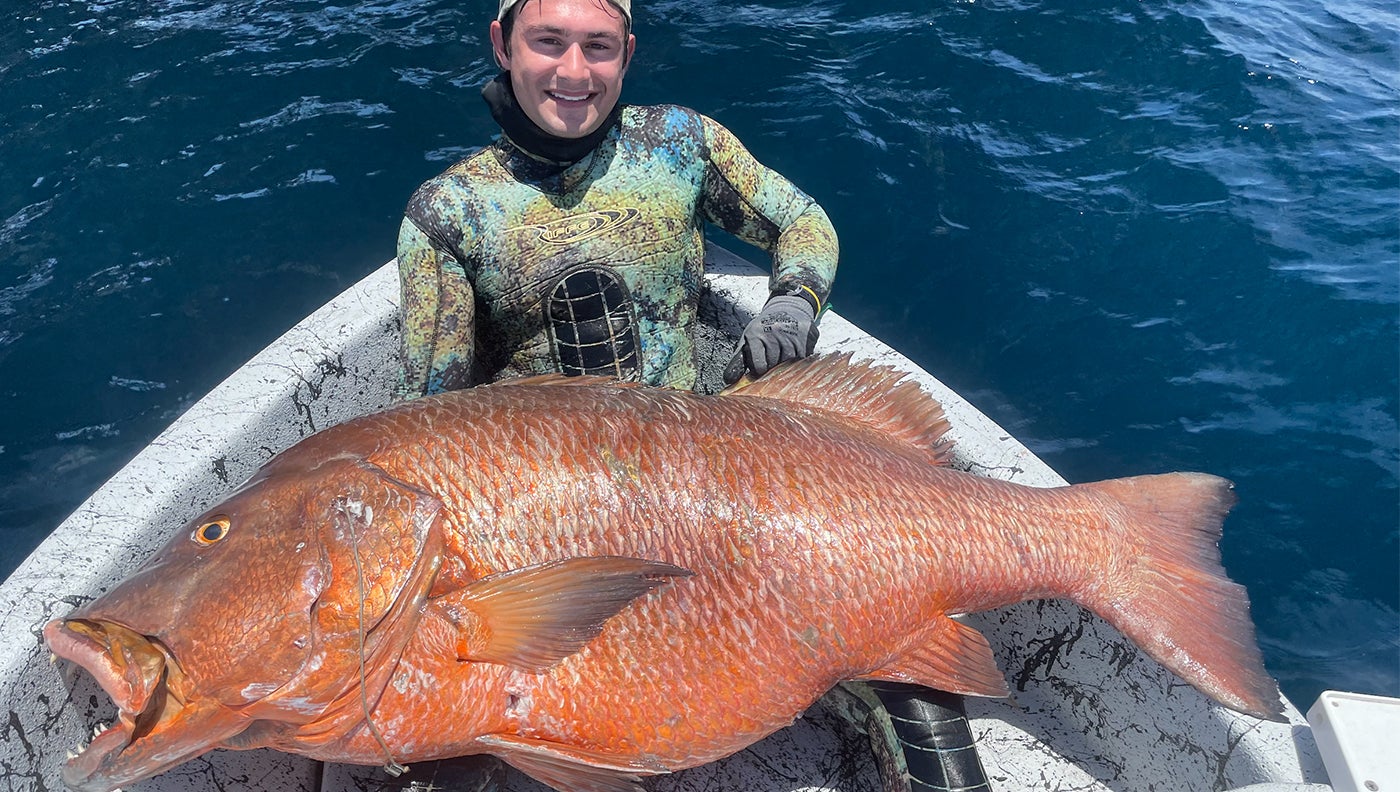 After spotting a massive cubera snapper while freediving around an oil rig in the Gulf of Mexico, spearfisherman Braden Sherron knew he’d have to raise his game if he wanted to boat a fish that big. The Texas A&M University-Corpus Christi student went home, spent a week testing and refining his setup, and came back June 3 to put three shots into a cubera that weighed 137 pounds, heavy enough to set a new spearfishing world record.

Sherron, who shares his spearfishing exploits on YouTube, first encountered the snapper while diving for amberjack 60 miles off Port Aransas. It was his brother, a spearfishing novice, who spotted a huge cubera far below them in the water. Sherron dove for a closer look, careful to avoid spooking the fish. He got within range but decided not to shoot.

“I didn’t have a heavy enough setup to land it,” Sherron told Field & Stream. “Cuberas are known to get shot and not get landed, because of their strength and size. They tend to tear out the spear, and you can lose them easily. There was no chance I was getting the fish that day. It would’ve been a reckless ordeal, and it would not have ended well.”

Back in Corpus Christi, Sherron took to the pool to try out some heavier spears on a higher-powered gun. “Cuberas are super hard-scaled fish, very dense, so you need quite a bit of power to get through them,” he explains. “I have a big bluewater speargun for long shots, and I was testing it with different spears and different tips.” He settled on an 8-millimeter spear armed with a slip tip, a 5-inch head that detaches from the spear after it penetrates the fish, giving the fisherman a secure anchor with less risk of tearing free. He also consulted his spearfishing buddies to discuss shot placement and tactics. Geared up and with a game plan in mind, he headed back to the rig with his brother on a mission to take what was undoubtedly the biggest cubera he’d ever seen.

“Our weather window was good only for the morning, so we didn’t have much time to get it done,” Sherron recalls. “We made the long run offshore, tied up to the oil rig, and I put my wetsuit on and gathered my gear. I slipped into the water nice and quiet.” As he swam near the surface and peered down through the pipes and superstructure of the rig, he encountered barracudas and sharks, but saw no signs of the cubera. But after a few minutes, he spotted it, about 50 yards away and 40 feet below the surface.

“I guess it saw me, because it started swimming away immediately,” Sherron says. “Cuberas are known to be pretty elusive. They’re really smart and hard to get to. I thought, Oh, no, I’ve busted this fish out of here. So I swam outside of the rig in the opposite direction of the fish, waited 15 minutes, and then swam back inside the rig to where I thought the fish had gone.”

Freediving is done without scuba gear, so the length of a dive is limited by how long divers can hold their breath. Sherron says he tried to relax as much as he could, to slow his heart rate and calm his breathing. He took a few big breaths and dove down again alongside the rig.

“On my descent, at about 55 feet, I peeked my head up and saw this huge barn door of a cubera snapper sticking out from one of the rig legs,” Sherron says. “I immediately knew this was a big, big fish, and I was gonna take it.”

He lined up his shot behind the snapper’s head, pulled the trigger, and saw the spear pass through the fish. “It was just pure chaos from there. The cubera took off, but thankfully it got all wrapped up in the oil rig legs right where I’d speared it and pretty much fought itself, which was the goal. Since the ocean there is 200 feet deep, I couldn’t have gotten down to the bottom to untangle the fish. It worked out perfectly.”

Needing a breath, Sherron surfaced and told his brother that he’d shot the snapper. “My heart was racing,” he recalls. “I was trying to stay calm and relaxed, because with these fish you don’t got ’em until you have ’em in the boat. I was trying not to celebrate too much.” He spent about 10 minutes slowing his heart rate, then dove and put two more spears in the fish to secure it before bringing it to surface.

According to the International Underwater Spearfishing Association (IUSA), which maintains spearfishing records, the men’s speargun record for Atlantic cubera snapper is a 122.4-pounder shot in 2006 by Tarsio Storace. (The International Game Fish Association lists the all-tackle world-record catch as a 124-pound cubera caught by Marion Rose on June 23, 2007, but the IGFA does not recognize fish taken by spear.) Sherron says he didn’t know what the record was and had no clear idea of what his snapper might weigh. “I just knew it was a really good cubera,” he says. “I thought it was maybe 80 pounds. I realized how big it was when I couldn’t put it in the boat myself. My brother had to get in the boat and hoist it over the gunnel. It took just about everything we had to get it in.”

Many spearfishermen consider successfully harvesting a big cubera to be the pinnacle of the sport, he says. “It’s kind of like the dream thing to do, so I feel accomplished now that I’ve done it.” To hold the top spot in the IUSA book—which Sherron plans to apply for soon—would be an even bigger thrill. “I would equate it to shooting a 200-plus-inch whitetail deer on public land,” he says. “It’s one of those things that happens once in a lifetime, and you can’t believe it when it does.”