Five Reasons You Missed That Dove

Another bird will fly by soon. Here’s how to fix your problems and knock the next one down 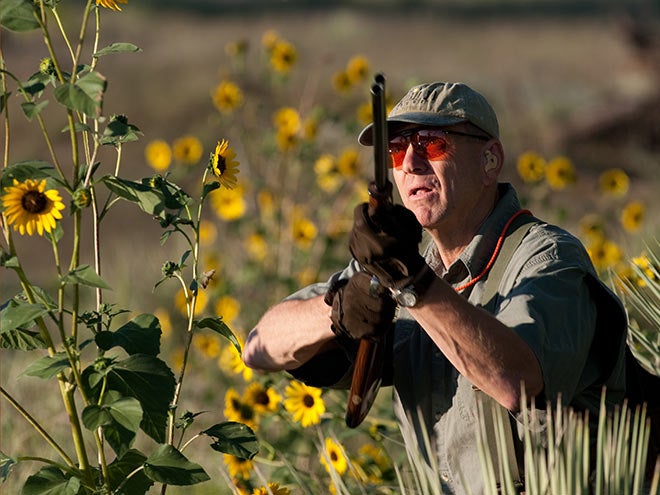 Eye on the Prize: Focus on the target, not the shotgun's bead, and you'll hit more doves.. Russell Graves
SHARE

You emptied your gun at it, and the bird never missed a wingbeat. It’s gone. It’s history—and those who fail to learn from history are doomed to repeat it. A lot of history is made in the dove field. The oft-repeated statistic is that the average shooter expends five to seven shells for every dove bagged.

Now is not the time to hector you about how you should have practiced all summer instead of fishing or golfing. It’s time for some quick advice. The next dove is coming, and you need to hit it. Here are five reasons you missed the last one, and five solutions to help you hit the next.

You Looked at the Bead

The Solution: Focus on the target—never the bead. If there’s one thing you should have learned from all that golf you were playing when you should have been shooting, it’s to keep your head down and your eye on the ball. The dove is the ball.

You Swung Too Fast

Mourning doves have been clocked flying as fast as 55 mph, but even on opening day most doves cruise along at slower velocities. High gun speed seems like it should be a good thing, but if you swing too fast, your eye goes to the fastest moving object it sees—the gun—at which point it stops and you miss behind (see Reason No. 1). Even if you do manage to keep your eye on the target, the faster you swing, the shorter the window in which the gun is the correct distance in front of the bird, making it harder to time the shot.

The Solution: You need to match, or nearly match, your gun speed to the bird’s speed. Moving the gun in time with the target—or thinking about moving it 1 mph faster if you use the swing-through method of lead—­magically makes doves seem to fly slower, which makes them easier to hit. 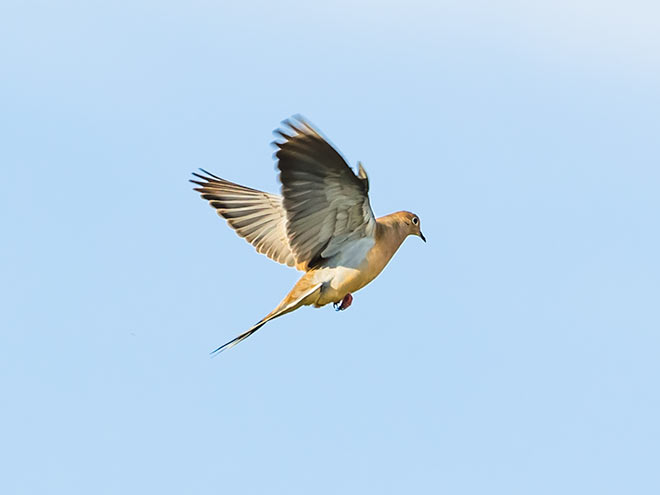 “To hit a crossing bird, your muzzle has to be in front of and below the target—and below is just as important as in front of.”

“To hit a crossing bird, your muzzle has to be in front of and below the target—and below is just as important as in front of.”

You Occluded the Target

If the gun blocks your view of the target, your eyes go to the gun and…we’ve been through this twice already. We are taught in hunter-safety class that muzzle up is the safe way to hold a shotgun, and it is. However, moving the gun from that muzzle-up hold into a shooting position tends to put the muzzle in front of your face where it can block your view of the bird.

The Solution: To hit a crossing bird, your muzzle has to be in front of and below the target—and below is just as important as in front of. When that next dove comes, get ready by dropping the muzzle so it’s angled slightly up and still safe, but below your line of sight. As you raise the gun, move the muzzle in the direction of the bird’s line of flight, keeping it in front and below.

The Dove Was Too Far Away

Most hunters struggle with targets over 30 yards. A 2008–09 Texas Parks and Wildlife Department study, in which 53 experienced hunters shot over 1,100 doves, showed that hit percentages dropped from 43 percent inside 30 yards to 32 percent outside 30.

The Solution: It’s tempting to shoot at every bird that flies by, but there’s another coming in a few minutes. Wait until you can see color and detail on a bird. That’s the one you want to shoot.

You Brought the Wrong Gun

I don’t know how many people I’ve watched pick up a superlight gun and say, “What a dove gun!” Wrong. Dove guns are shot, not carried, and featherlight models are difficult to swing smoothly. Also, hunters tend to overchoke for doves. Most subjects in the TPWD study used Modified and Full chokes, yet hunters with Improved Cylinder chokes hit the most birds.

The Solution: Shoot an open-choked gun with some heft and length. A 20-gauge sporting gun with IC chokes is about perfect. One of the beauties of dove hunting is that the car carries your gun(s), and you can put as many in the trunk as you like. Switch to a more open choke tube for that next bird. Or if you were smart enough to bring several shotguns, trade your featherlight model out for a longer, heavier option. The doves will still be flying when you get back.

RELATED: How to Make the Five Toughest Shots in the Dove Field