Flyfishing for Appalachian Brook Trout with the Iconic Yallerhammer 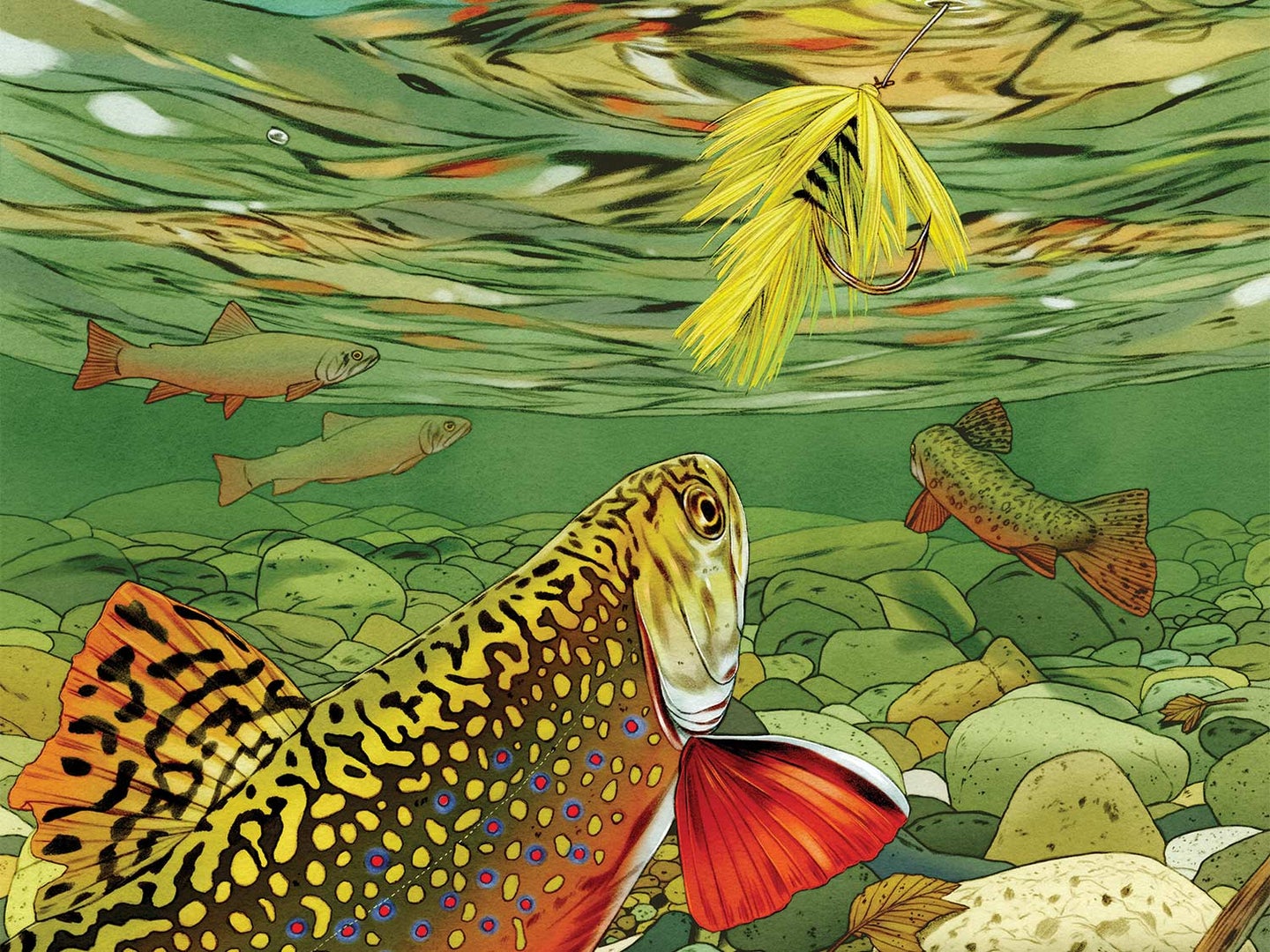 The old man called the fly the “skull crusher” because the brook trout would come after it so hard and fast that they’d bash their heads on boulders. He tied them with one arm, in the cool of the little store in the shadow of Grandfather Mountain, not far from the creek where he’d first heard of the fly when he was a kid, some 75 years earlier.

I thought I knew about the Yallerhammer, arguably the most traditional of the old Southern Appalachian fly patterns, but this was news to me. The region has birthed a number of homegrown fly patterns—among them the Thunderhead, Jim Charley, Sheep Fly, and Tellico Nymph, the region’s true breakout to fame and widespread use. But the Yallerhammer is the fly that seems to hold the fancy of local anglers. Its history is as shrouded in mystery and lore as these old North Carolina mountains are in their famed blue mist. Some say the pattern was devised by the Cherokee. Others figure Scotch-Irish pioneers dreamed up the bug. It was originally tied from the split wing feather of a yellow-shafted flicker—what the old-timers called a “yellow hammer,” a large woodpecker once common across these mountains—but these days, of course, it’s illegal to shoot a songbird such as a flicker. Most of the flies are tied with dyed mourning dove feathers. You hardly ever see anyone fish it. The Yallerhammer is an attractor pattern, sort of a Bob Evans–​buffet kind of offering, which tends to offend the purest of fly anglers. And the Yallerhammer was traditionally fished as a wet fly, although those have fallen out of favor these days.

None of this mattered to me. I was hunting for Yallerhammers because of their historic and cultural significance. If they caused trout to bang their heads on the way to the hook, all the better. I bought the last four the old man had in stock, size 14s. “I’m fixing to tie some 10s when I get around to it,” he said, apologetically. But I couldn’t wait, because I was fixing to turn off the hard road and onto the Forest Service gravel, and climb high enough into the Southern Appalachians to leave behind cell service and stocked fish alike. Four Yallerhammers seemed like plenty to gamble the day on.

The last time I counted, there were 1.6 billion trout fly patterns, with more on the way, options made increasingly numerous through an ever-evolving array of new synthetic fly materials—stuff like holographic chenille, UV polar flash, translucent midge tubing, and photo-imprinted foam.

I’d hardly be called a traditionalist, with my graphite rod and sling pack, and I’m a sucker for sexy articulated streamers. Who wouldn’t want a Sex Dungeon in the fly box? But when it comes to tiny brook trout in ancient brookie water, there’s something to be said for dressing up in your Sunday best, flywise. Beloved though they are, rainbow and brown trout are interlopers in these parts, the rainbow hailing from western America, and the brown from the waters of Europe. Only the lovely little brook trout, whose name Salvelinus fontinalis means “dweller of springs,” can boast of being a true Southerner, hanging on in the highest headwater creeks since the last glaciers turned tail in retreat from Dixie heat. Drive far enough into these mountains and hike high enough into these headwater creeks, and chunking some gaudy postmodern polar-ice chenille fly at a fish like a wild Southern Appalachian brook trout seems a little off, like wearing Versace ankle boots to a rodeo.

With the classics in my chest pocket, I drove past the stocked section of the creek and past the delayed-harvest waters, parked at a sign that designated the stream as catch-and-release/artificial lures only, and started hiking. Up and farther up, until the trail petered out and the rhododendrons were too thick to crawl under. Until it was time to fish.

By then, the creek had narrowed to a meager shimmer in the boulders. It’s hard to imagine a trout even living there, but this is where these Southern Appalachian brookies have to stay, hunkered down against the browns and rainbows that will outcompete them for food and the warmer waters in lower, less protected crannies. There’s no room for a real cast, but I’ve never been an old-school dabbler, dipping flies into tiny pocket water like a mayfly laying eggs. So I moved through the crazy-tight cover without concern of scattering fish, threading the rod through the rhodos, holding my hat to my head, until the creek straightened out just enough.

I roll-cast a Yallerhammer into the foamiest part of the water and took in the slack line. The heavily palmered fly “sort of spins and twirls in the water,” the old man told me earlier, “and that drives the trout nuts.” I tried to imagine the fly doing just that, tumbling in the washing machine of the pour-over, then drifting in the calmer water, like something dazed and confused but still alive. And edible.

The fiberglass 4-weight bent deep, and the tip jerked like a dowitcher pointing fish. The little bugger ran straight at me, and I glimpsed a small slip of orange-on-white and green vermiculations just as it spun a 180 and darted back to the plunge pool. I took a half-step forward, protecting the light tippet, then coaxed the brawler to hand.

The yellow fly was nearly the size of the brook trout’s head. The fish struggled in my palm with violent wiggles, leaping from my loose fingers twice before I could get the forceps on the hook and back it out. Forget all that stuff about swishing fresh water through the gills and babying a fish until it gathers back its strength. This little pig had gumption and attitude to spare. It burst back into the deep water, trailing orange sparks like a bottle rocket. If it could have flipped me a ­pectoral-​fin bird, I’m sure it would have. Everything else was in miniature—the water, the rod, the fly, the cast—except for the outsize heart of that 12,000-year-old beast, its life a struggle, its future a stacked deck, but its fight and tenacious lust for life no mystery at all.

New for fall is Yakima’s rugged solution to rod transportation: a trio of rooftop rod carriers and roof boxes that work for conventional tackle and fly. The Double Haul totes four fully rigged fly rods in individual felt-lined aluminum rod tubes. Each slides in sideways to protect guides when you’re bouncing down rough roads. It comes with two locks. The tool-free universal roof-rack ­attachment works on all major rack brands.