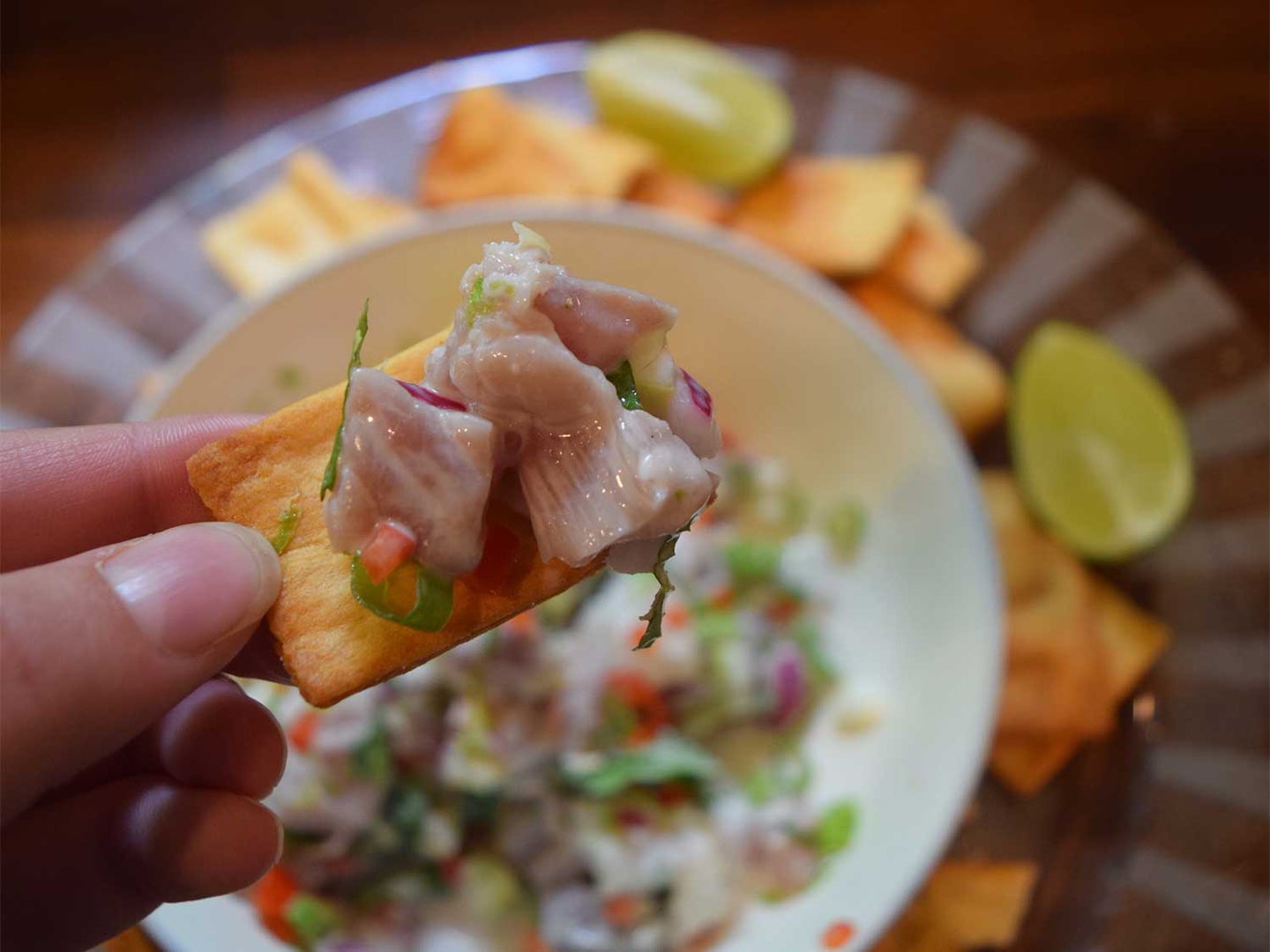 Editor’s Note: Some of the recipes described in this article were prepared onboard a boat while fishing. Check your local fishing regulations before consuming or cleaning fish while on the water. In some states, it is illegal to do this. All of this activity occurred prior to 2011, in federal waters, and in jurisdictions where it was legal to do so. Please check your local state and federal regulations before cooking, cleaning, or preparing freshly-caught fish while on the water.

Before I became a charter boat captain in Venice, Louisiana, I spent time running some well-known restaurants in New Orleans. During my time in the restaurant business, I was fortunate enough to earn some accolades from the likes of the James Beard Foundation and Esquire magazine, but in my heart, I just wanted to be in a boat in blue water. In 2001, I decided I was going to go fishing, and for the next 10 years, I did exactly that—in the world-class fishery of Venice. During that time, I frequently mixed my two loves of food and fishing, sometimes in a mundane fashion, but at other times, I pushed the envelope. Here are some of the more successful and exciting recipes that I developed while fishing out of Venice.

When I first decided to go fishing, I was lucky enough to land a deckhand job for Captain Scott Avanzino on his 32 Albemarle, Balancing Act. Scott was an outstanding marlin and wahoo fisherman and he along with Peace Marvel, Kevin Beach, and Billy Wells were developing reputations for pushing the boundaries of their boats to chase yellowfin tuna. Avenzino worked hard to differentiate us from Peace’s crew by marketing to a crowd that wanted a different experience, and part of that experience involved the food that we could provide on the boat. That seems like a small thing, but the Balancing Act was only equipped with a small refrigerator and a microwave—not exactly a luxury galley. We brought a grill with us on overnight trips but had to improvise on day trips.

During my first winter season, we stowed the 80W chair rods and broke out the 50W stand-up tackle to fish for big yellowfins on the Midnight Lump and to troll for wahoo around the shelf rigs. After a long day of wahoo fishing, we busted a shaft on one of the Caterpillar 3108s. We limped in, cleaned the client’s 11 wahoo, and went about making overnight repairs.

We were up at 5 a.m., fueled the boat, took on ice, and loaded up the clients; and off we went to fish for tuna on the Midnight Lump. By the time we arrived and set the anchor, Scott and I were starving. Scott asked me what we had to eat, and I reminded him of the wahoo.

“I’ve got the angler, go see what you can do with the fish,” he said.

I just couldn’t bring myself to microwave wahoo—that would just be plain disrespectful to such an amazing fish. I looked in the fridge, grabbed some butter and lemon and decided to double wrap the wahoo in foil with just those two simple ingredients and a couple dashes of Worcestershire sauce. From there, I opened the hatch to the engine room and put the sealed packets on the exhaust manifolds. After 20 minutes, I pulled them off, and we all feasted while one of our clients finished up a battle with his 180-class yellowfin. Everyone was excited about the fishing and the food. From there a tradition was born, and, if it was calm enough to cook on the manifold, we provided hot lunch on The Balancing Act.

After experimenting a bit, I discovered that day-old wahoo worked best for this dish. Either way, I would cut ½-inch thick slices of wahoo or mahi. If I could, I’d sear the fish the night before after seasoning it with salt, pepper and a few dashes of paprika and garlic powder. To sear it, I’d get a heavy sauté pan white-hot, add a bit of canola oil, and cook both sides for a minute or so each. I’d then cool it in the refrigerator, and mix a compound butter the night before as well.

Read Next: The Ultimate Guide to Fried Fish and Wild Game Recipes

By the next summer, I had earned my Captain’s license and went to work with Peace Marvel and his crew on a Glacier Bay catamaran. The twin outboards put a crimp in my manifold cooking, so I had to find a Plan B. Several years prior, while in New York to cook at the James Beard House, I had a late dinner at Patria which was run by a brilliant chef named Douglas Rodriguez. Douglas was known for his ceviche creativity, and I sampled all of the ones that he had on the menu that night. At the end of our meal, Rodriguez came out to the table and chatted. He then brought us into the kitchen to try some ceviches that he was working on.

I was amazed and surprised by the flavors that he was pairing, but they all worked beautifully. While I was running the Reel Job, my 26-foot Glacier Bay, I decided that it was time to adapt the ceviches that I had tasted in New York to work with fresh Gulf seafood. Here are a couple of my favorites. (Note, in some states it is not legal to clean and consume freshly caught fish on a boat, so be sure to check the current regulations.)

Mix in a Ziplock and allow to sit overnight:

Hold in a separate Ziplock bag:

Dice 2 pounds of fresh tuna in to ½-inch cubes. Place the tuna in the first bag and allow to sit on ice for 1 hour. Add the remaining bag and coconut milk and mix well. It’s ready to eat at this point.

Easy Ceviche Marinade to Make Ahead of Time

One night while fishing with some buddies on a 54 Bertram, we had some blackfin tuna come up around the boat, and we caught a bunch of them on spinning rods and Yo Zuri poppers. Around midnight, I was tired of catching blackfins—and starving. I cleaned a tuna and lit the grill. I knew exactly what I was in the mood for and had all of the ingredients to make it. With tuna this fresh, I was going for some blackened tuna sashimi which is a great way to give your tuna some texture and a bit of a spicy kick.

Make ahead of time:

Heat until it boils and cool. Store separately:

My uncle, Herbie, served this dish served at his restaurant in Hilo Hawaii, Roussel’s, in the ‘80s and ‘90s. He and his chef were early fans of Hawaiian-Cajun fusion and may have invented this dish.

Read Next: 15 Great Ways to Cook What You Catch

While we are on the subject of things that can be done on a big boat with a galley, let me tell you about one of my absolute favorite tuna dishes. Both of my daughters grew up eating sashimi at the fish cleaning station after tuna trips, so they prefer to eat their fish as rare as possible. This dish is neither cooked or raw—it’s cured in the style of gravlax. We make this with the top loin of a fresh yellowfin, but it can be made with cobia, swordfish, or salmon. Fresh is an absolute requisite for this dish. If your fish is in question, cook it instead.

This takes a bit more time than a one-day fishing trip allows, but it can be pulled off in 24 hours—48 is even better so you long-range guys will really like this.

In a coffee grinder, roughly mix:

Then add to a ziplock with:

(As a note, I love this dish. Try it some time with pumpernickel and creme fraiche.)

5. Tobiko On The Fly Recipe

Last but not least is one of my favorite snacks while offshore. It’s not so much of a dish, in fact, there’s only one ingredient to speak of.

Chances are, if you have ever eaten sushi, you have eaten Tobiko, or flying fish roe. The first time I ever made this, I was drifting on the edge of the continental shelf south of Venice trying to catch a swordfish. I remember the night well as it was a tournament weekend and there were boats tied up to the standby buoys at Cognac and BP109. Our sword fishery was in it’s infancy, so I was trying to be sneaky and not give away my presence as we drifted by them, blacked out with just our green light in the water, fighting a couple of good fish.

On the boat were three of my closest friends, Marc Amos and Mark and Charlotte Hardy. While they were busy fighting what were at that time considered big swords at 178 and 211, we had flying fish gathering at the edge of the boat in the glow of the green light. Now and then one would shoot into the light to try to grab a quick bite to eat, and occasionally, I was lucky enough to net one of them for the live well. While Amos was fighting one of the swords, I snatched a flyer, and it got out of the net onto the deck of the boat. I grabbed it and squeezed a bit to keep the fish in my hands, and, low and behold, she started giving up some of her eggs.

As I held the fish, the eggs dropped around the salty edge of the live well. I knew what Tobiko was and I thought I’d give it a try. The Tobiko took on a bit of salt and seemed to “cure” pretty quickly. Over the next few years, every flying fish that came into my boat was squeezed gently to check for eggs, and if they were present, the eggs were removed prior to it going back out on a live bait rig. There is absolutely no reason to let the tuna or mahi have all of the fun. I find that five minutes of sitting on a salty gunnel or cutting board is all that it takes to cure the roe. Give it a shot, and you won’t be disappointed. It sure beats a soggy bologna sandwich.