Gear for Shooters: The Rifle Butt Cuff and Leather Sling from Diamond D

Some time back, I ran a post on Diamond D Custom Leather of Wasilla, Alaska, and the chest holster they... 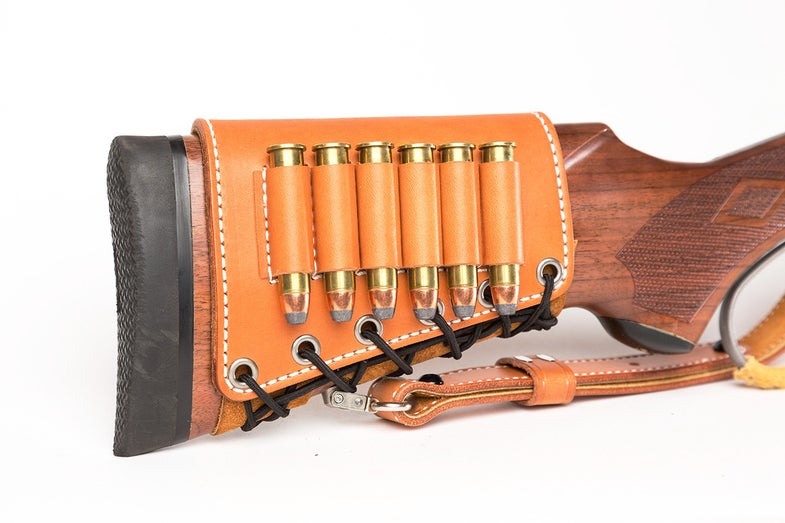 Some time back, I ran a post on Diamond D Custom Leather of Wasilla, Alaska, and the chest holster they make, which is about the best way I’ve found to go heeled in the great outdoors. Now, I’ve had the chance to use two more of their products, which are the Leather Rifle Sling and the Rifle Butt Cuff.

The Leather Rifle Sling is a cobra style, so-called because like the hideous hooded reptile*, it flares at the top. The effect this has is to distribute the weight of your rifle over a wider area and give the sling more gripping surface on your shoulder. The drawback is, you can’t use a cobra sling for shooting support. On the other hand, I don’t use a sling for shooting in the field, and neither does anyone else I know, and even the Army and the Marine Corps long ago dropped the use of the shooting sling, except for snipers, who don’t use it even though I believe it’s still issued to them.

But I digress. The Leather Rifle Sling is, like all of Diamond D’s stuff, beautifully put together. Each sling is made to order, so you have a choice of padded or non-padded, tan or black, tooled or plain. All the slings are lined with a suede-like fabric that keeps it from skidding off your shoulder and stopping at your elbow.

When you wonder how you’re going to carry your 11-pound chassis-stocked rifle for 8 hours without shrieking with pain, try one of these. The price is $55.

The Rifle Butt Cuff: One of the problems I’ve never solved is, if your rifle doesn’t feed from a detachable magazine, where do you keep the loose rounds until you’re ready to load them? I usually dump them in a pocket where they work down under six packs of Kleenex. Then, when I get to where I’m going, I go through the following drill: Drop at least one cartridge. Grope around in the dark and come up with handful of unidentified poop.

Drop poop, grope some more. Come up with small, unidentified animal that does not like being picked up. Emit small shriek of terror and throw away animal. Grope some more. Find cartridge, which is now covered in mud, snow, or ice.

Or, you can use an ammo cuff. I like the idea of ammo cuffs, but the execution has been lacking in the ones I’ve tried. The things will not stay put. They roll around and slip and slide on the stock and drive me crazy. The Rifle Butt Cuff, however, stays put. Diamond D puts an extra line of reinforcing stiches between cartridge loops to keep the loops from losing their hold over time, and it lines the cuff with the same nonslip suede as they use on the Rifle Sling. The lace which holds the Cuff in place is heavy elastic, and it has a death grip.

I put a Rifle Butt Cuff on a Montana Rifle Co. stock and it fits like a glove. It’s wedged in between the pistol grip and the rear sling swivel stud, and you can’t budge it. The Rifle Butt Cuff comes in natural, russet, or black, right- or left-hand stock (no cheekpieces, though), holds six rifle rounds or five 12-gauge shells, can be made for 18 different cartridges or for 20- or 12-gauge shells, and they’ll put your initials on it if you so choose. If you feel your rifle presents problems, ammo cuff wise, you can send Diamond D a photo and they’ll figure out how to make things work. The price is $95.**

*The late, great knifemaker George Herron once allowed that while he was in India, he killed a king cobra with a hand grenade. He never said what he was doing in India, or how it involved king cobras, or why he chose a hand grenade to do the job. I’d like to give it a try some time myself.

**It’s difficult to convey through mere words just how low these prices are considering the work that Diamond D does. If they charged double what they do it would still be fair.