Similar in feel and weight to the firearm, this air pistol is a decent alternate for training 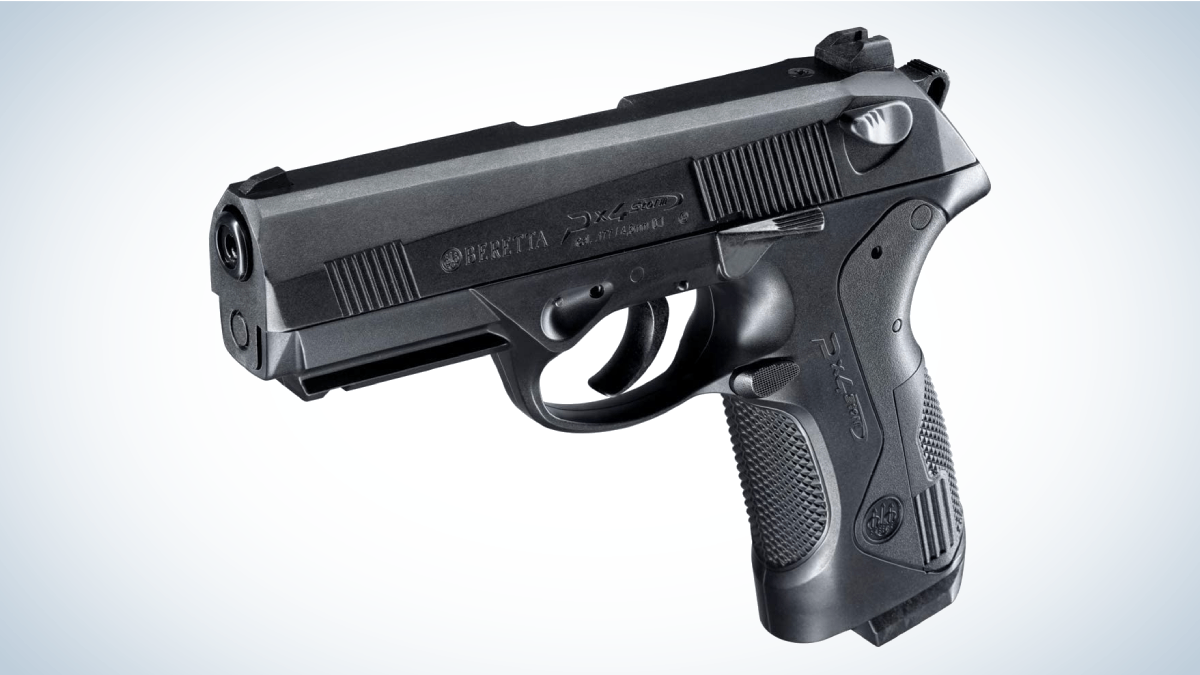 The Beretta PX4 Storm is a C02-powered BB/pellet gun that replicates the firearm of the same name. With the dimensions, weight, and feel of the firearm version—including blowback function—this airgun can serve as a serviceable training stand-in for owners of the firearm looking for trigger time without having to get to a range and pay for costly powder-burning ammo. The Beretta PX4 is also accurate enough for plinking and casual backyard target practice.

What is the Beretta PX4 Storm?

The Beretta PX4 Storm is among the many replicas of firearms manufactured under license by Umarex. The pistol uses C02 not only to send pellets (or BBs) downrange, but to power the blowback function that replicates the action of the firearm. It offers a great low-cost drill option for owners of the PX4  Storm firearm—a platform that is growing in popularity worldwide among military and law enforcement—but this pistol will also appeal to others because it’s accurate enough to be a fun backyard plinker.

How the Beretta PX4 Storm Works

The Beretta PX4 Storm air pistol features a metal slide with a polymer frame. While some Umarex pistol replicas feature full-sized drop-out magazines that hold both BBs and the CO2 cartridge, the PX4 has a unique system using a smaller projectile-holding magazine. It works well, though it won’t facilitate magazine loading drills.

The actual BB/pellet magazine is a separate piece, and is ejected using a button on the left front of the grip—just like the firearm. The top and bottom of the magazine each feature an 8-round, rotary magazine for either steel BBs or pellets. Loading is easy. A magnet helps ensure that BBs stay in place before being pushed into the mag.

“Safeties” on both sides of the slide, which mimic those on the firearm, are purely ornamental. The actual safety is atop the grip on the right side, just below the slide. The slide lock is also non-functioning. Because the slide doesn’t lock open after the final shot, you’ll have to keep count of your shots. If you don’t, a “Puff!” sound makes it obvious when you make the transition from shooting projectiles to shooting nothing but air.

How We Tested the Beretta Air Pistol

We shot the Beretta PX4 Storm a lot over the course of a few months in the backyard and at my 10-meter basement range. Whether we were shooting BBs or pellets, we got about four magazines (the full 16 shots) out of each CO2 cartridge before velocity started dropping enough to affect accuracy.

Some firearm replicas sacrifice projectile accuracy in the name of replica accuracy. In other words, the airgun versions may closely mimic the firearm in form for drilling but don’t produce great results downrange. While the Beretta PX4 Storm from Umarex is not an exact copy of its firearm sibling—again, with the safety and slide lock—it’s better on the accuracy front than many other replica airguns.

At 5 yards off a rest, the pistol consistently produced 2-inch groups with BBs. Pellets were more accurate. Many groups would be in the 1-inch range, but all included at least a couple of fliers. Both pellets and BBs shot high at 5 to 15 yards; BBs, especially so. The groups also tended to the right. If the rear sight were adjustable, it would be easy to zero the gun. Because the sights are fixed, shooters would need to alter their sight picture. Another option would be to use a laser sight, which can be affixed to the picatinny rail in front of the trigger guard.

Even without a laser, the Beretta PX4 Storm loaded with pellets is a tin-can-buster all day long.

The pistol would likely be more accurate but for the trigger. Because the trigger pull is what advances the rotary magazine to put a projectile in the breech, it has a pretty stout pull. There’s a good half-inch pull before the trigger finally hits some pressure before the break. Shooters who aren’t careful can find themselves pulling off target while squeezing. It’s not a big deal and actually can help shooters work on form.

The safety is one that only a lawyer could love. If there is a way to switch from “safe” to “fire” with a single hand, I wasn’t able to figure it out. Even with two hands it requires some dexterity. That said, should someone actually want to use the safety, it does work.

What I Like About the Beretta PX4 Storm Air Pistol

Many buyers of replica air pistols are owners of the firearm versions of the guns and utilize the airguns for low-cost, low-noise training. The Beretta PX4 Storm air pistol doesn’t mimic all features of the firearm, but the weight and feel are so similar it is a serviceable stand-in for training.

Many of the Umarex-produced air pistols that replicate firearms have full-sized magazines. So, shooters who want to drill on magazine changes simply need to buy an extra or two. (And drill over soft surfaces, because the BB magazines are more fragile than cartridge-holding versions from the firearms.) The magazine on the Beretta PX4 Storm is thin and light and, while it ejects just like a full magazine, that’s where any similarities end.

Like other CO2 pistols with full blowback action, the PX4 Storm pretty quickly blows through C02 cartridges because that blowback requires a lot of “air.” You’ll get about 60 full-power shots from this pistol before velocity starts dropping significantly.  Because this pistol is so fun to shoot, you’ll run through a lot of C02 cartridges. At about 75 cents per cartridge, that cost can add up, but it’s important to remember that the airgun version of this pistol is still significantly less expensive to shoot than the firearm.

Is the Beretta PX4 Storm a Good Gun?

The Beretta PX4 Storm is both a stand-in for the firearm version of the popular pistol, and a backyard plinker.  It would be a better trainer for firearms owners if it featured a full-sized drop-out magazine, if the slide locked, and if the ambidextrous safeties were functional and not simply decorative. And it would be a better plinker if it had adjustable sights to compensate for the consistently right-of-center point-of-impact.

But, while not perfect for either application, it’s good at both. That is saying something for a pistol that can be had for right around $100.

Get the Beretta PX4 Storm Air Pistol at Cabela’s