Talk about flying blind. We covered the logos of our favorite high-end and low-end fly rods and compared them. The result was a nice surprise if you like saving money 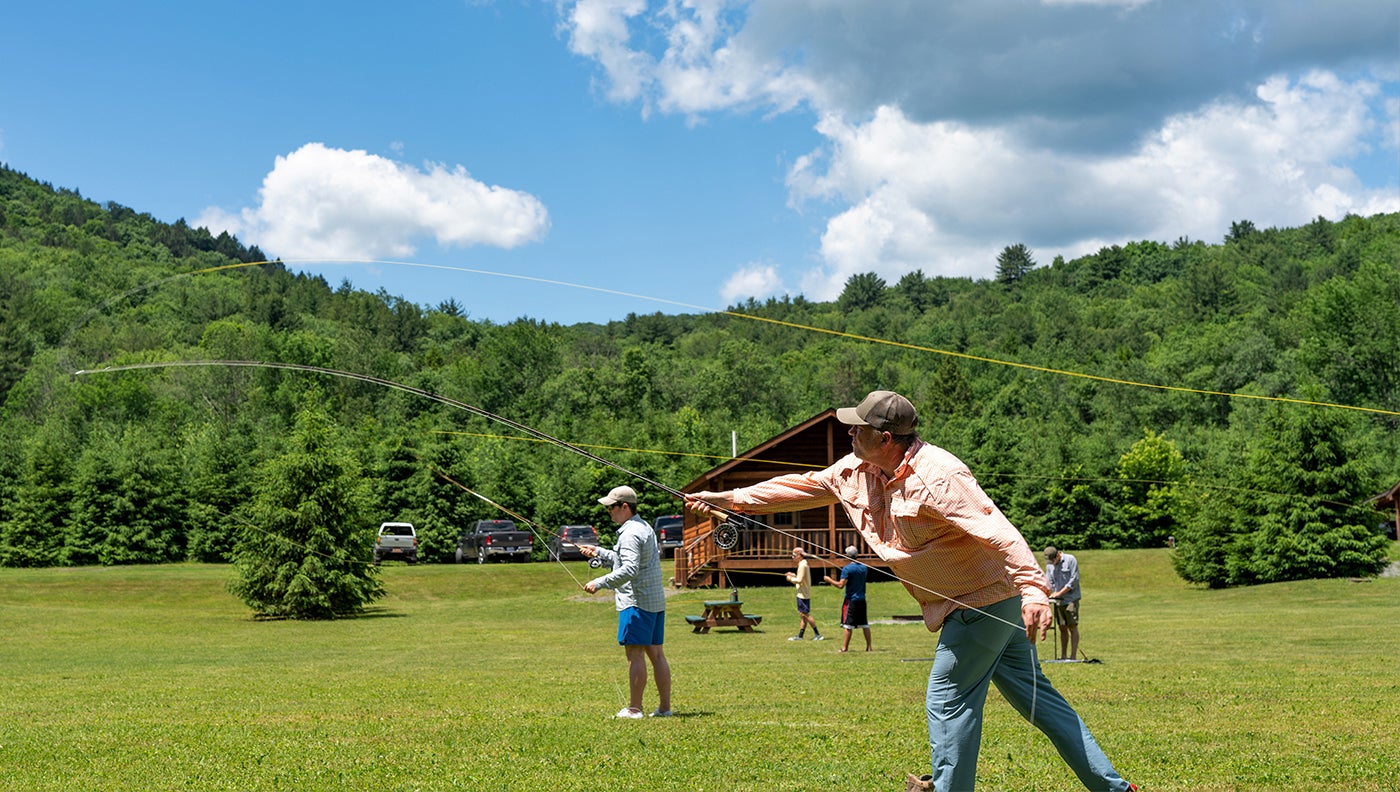 You’re a pretty good fly caster, right? You can tell the difference between a fancy fly rod and a cheap one. I mean, if I handed you a $1,000 5-weight to cast for a while and then switched it out with a $250 stick, you’d know right away which was which, wouldn’t you?

During the 2022 F&S Fly Rod Test, we decided to run a little side experiment. I’ve always wondered, if you couldn’t read the logo on a high-end fly rod, would you know it was high-end just by casting it? Would you be able to tell the difference between it and a cheaper stick? Or is all of our talk about next-level feel and control and responsiveness tinged with a certain amount of B.S.—justification for all the money we drop on fancy rods.

To find out, we used masking tape to cover the logos of several of our favorite low-end rods ($250 to $500) and several of our favorite high-end rods ($900 to $1050). Because we already had some familiarity with each, having evaluated them for our main test, we also cocked our ball caps to one side to block out any recognizable features we might have picked up on in our peripheral vision while casting—which is why we look so goofy the video, or, one of the reasons.

The Test—and One Crazy Result

Our test was simple. One at a time, each tester stepped up to the casting line and was handed one unmarked rod after another to cast near and far until he had a good feel for each. At the end, he ranked all the rods.

Not only that, but some of us (as in, me), ranked one of the test’s cheapest rods above most of the high-end rods. In one mind-blowing, and slightly embarrassing, sequence, editor-in-chief Colin Kearns handed me one of our absolute favorite high-end rods from the main test, a rod that cost around $1,000. I cast it and said, “Yeah, this is really nice.” Then he handed me one of the cheapest rods. I cast that, and said, “Oh, this is even better.”

Then all the testers gathered around to point and laugh at me. Which was good fun. But, in fact, all of them put the same rod up near the top.

This seems like a good time to take a step back and enumerate my excuses, I mean, observations about the test and its results. What did we really learn, and what didn’t we learn? Well, this being a quick lawn-casting test, I’d say we were focused more on distance and castability—how easy it was to throw tidy loops and shoot line. So, we didn’t learn much about each rod’s versatility or all-day casting comfort or precision and line-control on the water. Which makes me want to expand this test next year.

But we still learned tons. The biggest and most shocking takeaway from this test is that when it came to just casting—to throwing line with power, feel, and accuracy—four experienced fly fishermen could not clearly tell the difference between some low-end rods and others costing three times as much, or more. That is a huge deal, because it means you do not have to spend big bucks—or even medium bucks—to get a really nice-casting rod.

Naturally, there are a few limitations and provisos. The key one is that you can’t buy just any cheap rod and expect it to cast great. The vast majority of inexpensive rods we cast in our main test did not perform nearly as well as the high-end rods. But a couple did, which means it’s time to name names.

All of us were hugely impressed with the Moonshine Vesper, a tremendous bargain at around $500. One of our testers put this rod in his top-three after the blind-casting test, and several of us ranked it higher than at least one high-end rod. As another tester wrote in his notes: “It casts effortlessly and has the feel of a premium rod at half the price.” The Vesper is light and lively, with surprising power, and it’s a great-looking rod, too.

But the real showstopper was Orvis’s updated Clearwater—an absolutely astounding caster for around $250. I could cast this rod to 90 feet just as easily as any other 9-foot rod in our entire test, with consistent flat loops, impressive feel, and solid accuracy. I don’t think we had a more forgiving rod, period, which makes the Clearwater a no-brainer for beginner casters. On the other hand, I’m a not a beginner caster by a long shot, and I would not hesitate to fish a season with this rod.

Now, before I get carried away, it’s time for the other provisos. When it comes to the finer points that make a premium rod premium—things you don’t notice so much in a quick lawn-casting test, like all-day casting comfort and versatility, line control, and precision on the water—even the best cheap rods will come up a little short. Upon closer inspection, you’ll find that the Clearwater is a little on the heavy side. It’s mostly a big-water rod that lacks some finesse and versatility. And, of course, the components are all very basic.

But the truth is that many of these finer points are just luxuries. Aesthetics, for one. But also take weight. Sportsmen tend to be a little crazy on this point when it comes to their tools. Explain to me, for example, why a 6-pound rifle is a wand and a 5-pound bow is an anchor. So, like anyone else, I might rave about a featherweight rod that somehow still has the power to drive long casts into the wind. But do I need it catch fish? Nah. Will an extra ounce of rod weight really wear me out by the end of the day? I don’t think so.

It’s up to you, of course, whether these luxuries are worth an extra $500 to $700? To many serious fly anglers, probably myself included, they are. Which is fine and dandy. But that’s not the point here. The big news—the surprising discovery of our blind-casting experiment—is that anyone who can scrounge up $250 can go to the trout river with a great-casting rod and not feel under-gunned compared to the fancy dudes downriver. And the fancy dudes downriver—who can’t see the logo on your rod—can think, Man, that guy can really cast. I wonder what rod he’s got.