Graphite vs. Glass: Which Type of Rod is Better for Crankbaits?

Graphite and fiberglass fishing rods each have their advantages and disadvantages. But which one is best for running a crankbait? 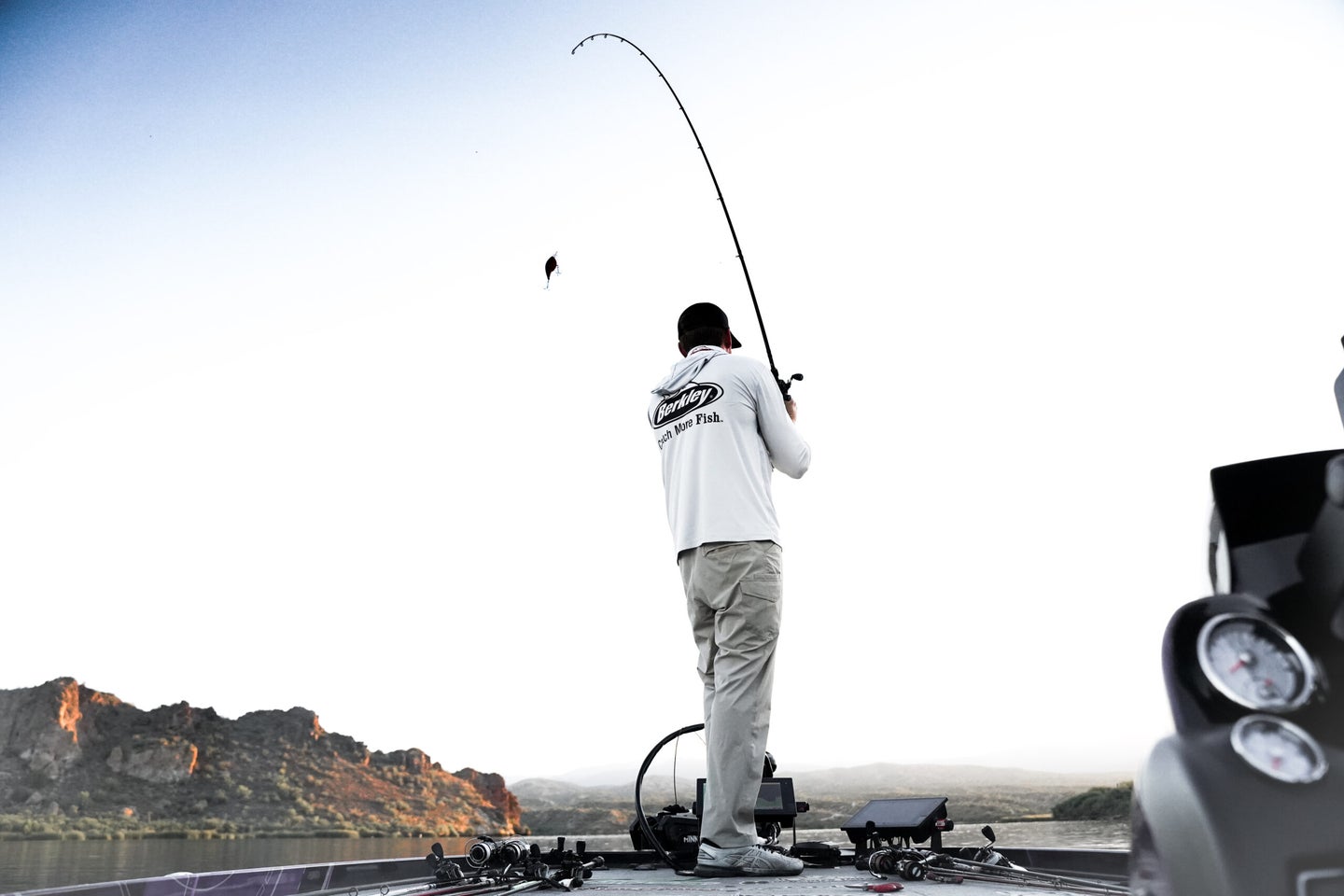 Is graphite too stiff to use with crankbaits?. Berkley
SHARE

At the dawn of the modern era of bass fishing, fiberglass rods were the only real game in town. Sure, there’d been bamboo and a handful of other materials in the mix, but from the 50s through the early 70s the “glass” sticks were the pinnacle of modern technology. Then in 1973 Fenwick introduced “space age” graphite to the market and suddenly everyone jumped on that bandwagon instead. Glass was a thing of the past. Sure, there were dalliances with other materials like boron and Kevlar, but they were fleeting and limited at best.

To be a world-class angler meant having a rod locker full of graphite rods.

Sure, the light weight of graphite was a boon to anglers using the new “flipping” technique that required longer rods. It was more sensitive, too, so you could feel a fish breathing on your plastic worm in 30 feet of water with a stiff cross-wind.

But eventually, it slipped out that not all of the world’s greatest bass anglers were stuck on graphite for every technique. They might’ve liked it for doodling a grub on light line, flipping a big jig into heavy cover, or for reading subtle bites on a Carolina Rig, but with treble hooks, it had its drawbacks. In many respects, the same rigidity and sensitivity that benefitted them in some contexts hurt them with hard baits.

Four-time Bassmaster Classic winner Rick Clunn, a noted crankbait expert, and North Carolinian David Fritts, who both sometimes seem to throw nothing but diving plugs, were two of the first to let the secret out. Modern graphite, they said, was so incredibly sensitive that they could indeed feel a bass “pushing” the lure, and their natural muscle memory led them to pull the bait out of their prey’s mouth. Additionally, even using the stretchy monofilament that was pretty much the only line option in the 80s and early 90s, if a fish on a short line near the boat were to make a surge, the lack of “give” in a graphite rod would often cause the relatively small trebles to pull free.

Suddenly, the pendulum swung completely the other way. Following the leads of the likes of Clunn and Fritts, aspiring pro anglers and weekend warriors kept graphite limited to “feel” techniques and replaced their long-discarded fiberglass rods with newer ones. It wasn’t just for diving crankbaits, either. Some of them decided to use fiberglass for any medium or fast-moving technique, including lipless crankbaits and spinnerbaits. Some also used them for topwaters, where a jumping bass could dislodge a hard lure and spit it back at a disappointed angler.

Eventually, manufacturers added some composite models, offering a blend of linear graphite and glass, or a graphite main section fused to a glass upper portion, for the most part, the choice remains binary—do you like the forgiveness of the slightly-stiffer-than-a-wet-noodle fiberglass, or do you value the sensitivity and lightweight of graphite. Let’s go to the tale of the tape:

A fiberglass rod rated for crankbaits of a certain weight and diving range, even if it has the same additional components as its graphite counterpart, will weigh more. That’s simply the nature of the beast. We’re not talking about pounds here, just ounces or fractions of ounces. But over the course of a day, it’s enough to make a big difference. That’s not just because you could be making several thousand casts, but also because crankbaits pull back. Throw one of the super-deep-divers like the Strike King 10XD or the Norman DD22, and you’ll have your work cut out for you. That’s why all of the cranking gurus seem to have forearms like Popeye’s.

Of course, an improperly balanced rod, or rod and reel combination, will wear you out even if it doesn’t push down the scale very far, so your entire outfit is really the question mark here, but all things being otherwise equal, you’ll be less fatigued with graphite.

This analysis is a little bit tricky. The very thing that drew pros like Clunn and Fritts back to fiberglass initially was the simple fact that graphite was too sensitive. It was a simple case of more is less, or perhaps less is more. Perhaps if you not only fish but crank 200 days a year, you’ll be in tune with fish enough to give up some of that sensitivity, but those of us who aren’t out there need a little bit of a boost to stay in touch.

Sure, if you’re chunking and winding a heavy, hard-wobbling crankbait, you may be able to feel what it’s doing all the time with any rod, but what about light, tight-wobbling balsa baits? I need to know that they’re running right, and with the proper amount of sensitivity, you can tell whether the lure is hitting rock, sand, mud or wood, or something else. That’s an advantage because it tells you whether to rip your lure free from vegetation to generate a strike, or to back off and prevent your lure from snagging on a gnarly stump.

Does the added sensitivity mean that you’ll rip some hooks straight out of the mouth of a biting bass? Maybe, but if you back off a little, the advantages outweigh the disadvantages.

Today’s fiberglass cranking sticks and their composite brethren aren’t as painfully whippy as the ones of yesteryear, but they’re still not as crisp as modern graphite. That doesn’t mean that they won’t cast as far, but when switching up from other techniques, you’ll have to adjust your motion and mechanics to get things right. If you’re using graphite for everything else, the change may make you feel like a man trying to swat a bee in a phone booth with a golf club. Fiberglass may be more forgiving when you’re throwing the big deep divers, but when you’re making tight roll casts to cover, or precise shots at riprap banks, you’ll be happy to have something you’re used to.

Winner: Slight edge to graphite, if only for familiarity.

The lightweight characteristics of graphite reflect an overall brittleness—as you get more sensitive, you typically get more fragile. Just ask anyone who’s had a rod break for no apparent reason on a hookset or when making a short cast. Just banging around on the deck of your boat, they may develop cracks and fractures that don’t reveal themselves until later. But when they do, you essentially now own a very expensive tomato stake. Fiberglass, by comparison, is remarkably resilient. That’s not to say that you can’t break it, just that you’re far less likely to do so.

Read Next: 3 Bass Lures You Should Never Go Fishing Without

You can’t make fiberglass more sensitive, but you can “dumb down” graphite. In other words, don’t go for a rod with the highest modulus fibers when selecting one to use for crankbaits. You just want a rod that maintains the “parabolic” action that the pros all seem to revere. That way the rod won’t be super-stiff, and the bend will go down further toward the handle. And if you still can’t decide between glass and graphite, consider a high-end composite stick.

Of course, there are also other factors that come into play today that weren’t at issue when Clunn and Fritts made their public announcements several decades ago. The first is line choices. Back then, mono was more or less the only game in town. Today, we not only have mono and copolymer nylon lines, but also fluorocarbon, braid, and hybrids. If your fiberglass rod doesn’t provide quite enough feel, pair it with low-stretch fluoro. If your graphite rod is a bit too sensitive, slow it down with mono. Fritts, bucking the trend of the vast majority of his peers, cranks with braid.

Another factor is rod manufacturing improvements. The companies have simply gotten better at transferring some of the characteristics of glass to graphite and vice versa. Even Fritts has gone to a composite model. He also uses a Lew’s baitcasting reel with no anti-reverse, claiming that he can feel through the reel what his lure is doing, providing him with key clues that lead to more fish.