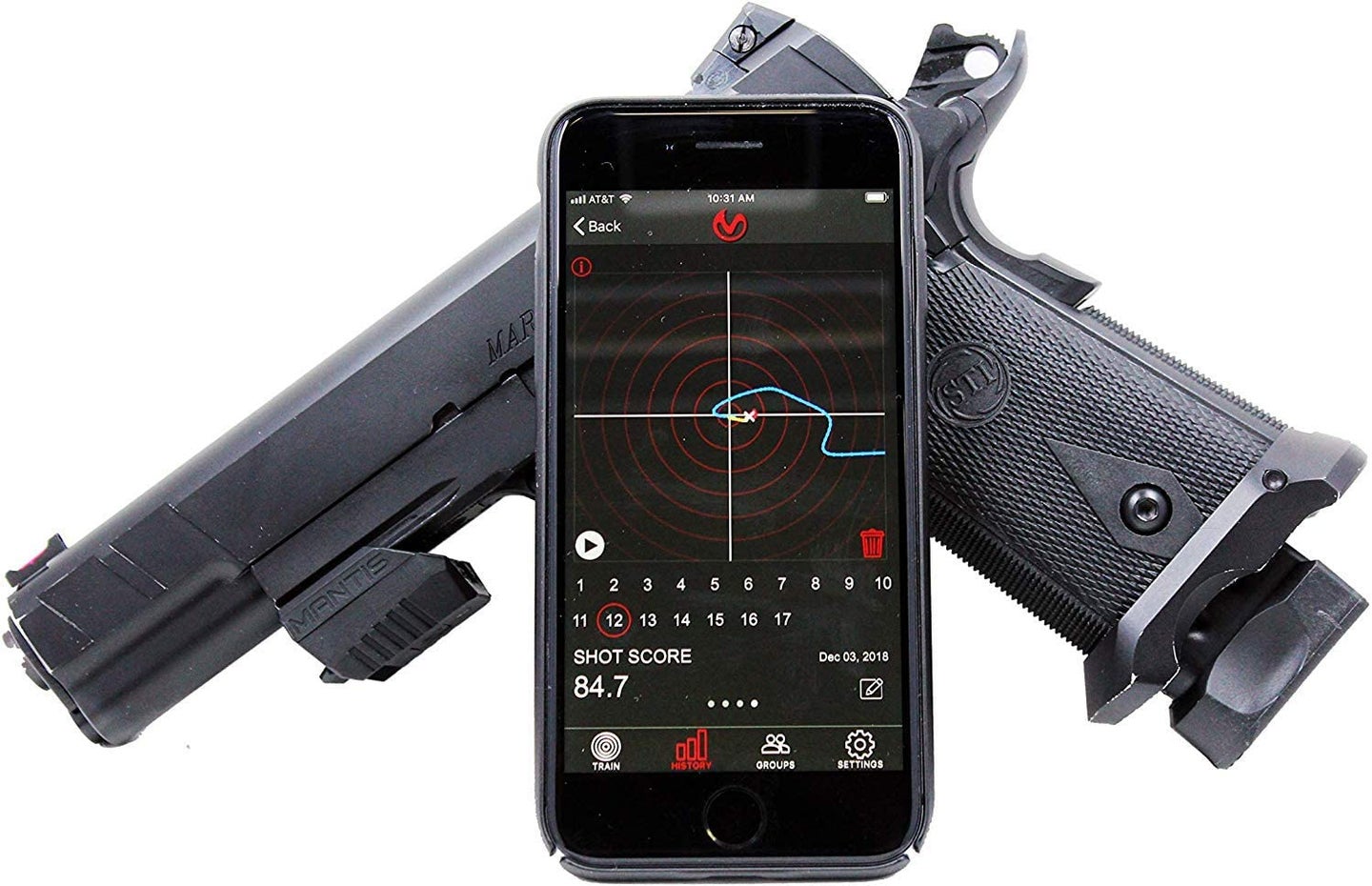 I’m not sure if it’s the current scarcity of ammunition or simply my paying more attention, but I’ve noticed more high-tech shooter training systems than ever before. And it got me wondering: Can a high-tech trainer make me a more accurate hunter and shooter? In the case of the Mantis X10 Elite trainer, the answer is, yes, I believe it can—in the home, at the range, and in the field.

I received a Mantis X 10 Elite package for testing and evaluation. The system works with a cell phone or tablet and is compatible with iOS and Android platforms. The kit contained:

I decided to start my review with a handgun, specifically a Springfield Armory XD-M OSP semi-automatic pistol chambered in 10mm Auto. I’d already mounted a Trijicon SRO optic on the XD-M and zeroed it at my range in anticipation of deer and hog hunting.

First, I downloaded the free Mantis X app onto my iPhone through the Apple App Store.

Then, I mounted the Mantis X10 Elite sensor to the under-barrel rail of my XD-M. The sensor slid onto the picatinny rail and then snapped into place. If you don’t have a rail, the Mantis X10 comes with the afore-mentioned MagRail Adapter, plus various attachments can be ordered for Mantis to fit specific firearms, too.

NOTE:  When I switched to practice with my rifle, I first added a small section of rail to the bottom on the AR’s handguard and attached the sensor.

So, here’s how the Mantis X10 Elite works—and doesn’t. When attached to your firearm the  sensor tracks movement via internal accelerometers, which measure vibration, shock, acceleration, and motion, as well as gyroscopes which calculate angles and how the firearm is tilted. The sensor plus app records and analyses all this data in real time.

However, the sensor does not identify the bullseye specifically. That is, there’s no radar or beam that leaves the sensor and bounces off the target. Instead, the sensor makes an estimation of where the target center likely is given the movement patterns of your firearm before, during, and after the shot.

When you access the “Training” section of the app, Mantis presents a variety of drills. For handguns, this includes a basic “Benchmark” drill to determine your baseline shooting ability, plus various timed and non-timed drills. Shooting drills for the rifle training are similar. The sensor and app also uses that data to assess why you might have missed and what you might do to fix the situation.

For example, when I began my training with the XD-M, I dry-fired 10 shots at a small piece of paper taped to my living wall 10 yards away. Mantis X10 recorded data for each shot, and at the end of the drill presented a score for how close I came to the bullseye on each shot and as an average for the shot string. A perfect score is 100.

I didn’t receive any 100s, though I did score many shots in the 90-plus range. And a fair number well below 90!

Mantis X10 Elite trainer also created a “spider chart” for each shot, with a blue line depicting the position of the firearm while I was holding and sighting in and a yellow line indicating when the trigger pull started and ended. A red line shows the shot as it breaks and the recoil immediately afterwards.

When my accuracy was poor, the unit made suggestions as to why I was missing.  “Breaking Wrist Up,” and “Tightening Fingers” appeared on my XD-M drills.

At the shooting range, I live-fired the XD-M at targets 25 yards away, and then compared the actual hits to what the Mantis X10 Elite trainer was telling me. Any shot Mantis tallied as 90-percent or better was very close to a bullseye hit. As the numbers declined, the distance from the bullseye increased.

Again, the unit provided data and charts for each shot, plus suggestions for improvement.

I also did live fire at the range with a new rimfire rifle, a Smith & Wesson M&P 15-22 in .22LR. I did quite well, according to Mantis, when sitting and shooting from a rest. Standing and offhand, the misses started coming. “Pushing with firing hand,” was the unit’s critique for my offhand firing.  Which, I discovered, was the case.

I think Mantis X10 could be a help in the field, too, especially for hunters sitting in a blind or elevated shoot house. I’m reminded of the times I and others have missed fairly easy shots on animals, even though we had spent time and ammunition at the range getting our rifles and handguns zeroed. Of course, there’s no one reason for a miss, and simple excitement has caused many a trophy deer or elk to get away unscathed.

But another reason is simply that the field is not the range. Shooting from a chair in a ground blind or shoot house is a far different setting, with angles very different from the range. If dry firing is a possibility, I’d suggest taking a few dry shots using the Mantis X10 once the hunter was in place and seeing what the unit reports back.

Read Next: Can’t Find Any Ammo? Do These 3 Dry-Practice Handgun Drills

My X10 Elite system retails for $249. At today’s centerfire rifle ammunition prices, that could easily equal a half day at the range.

Field & Stream is dedicated to covering safe and responsible gun ownership for hunting, recreation, and personal protection. We participate in affiliate advertising programs only with trusted online retailers in the firearms space. If you purchase a firearm using the links in this story, we may earn commission.