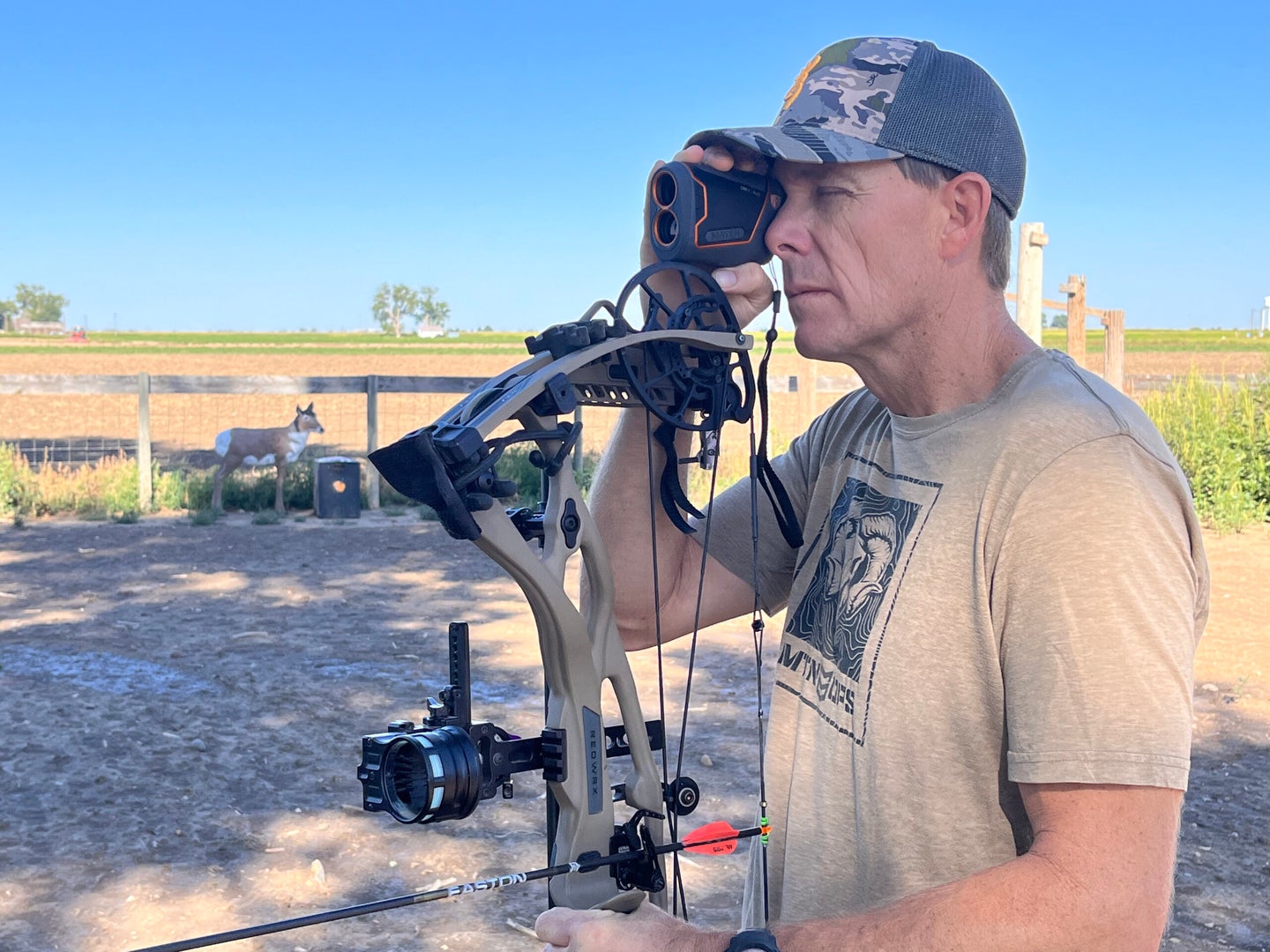 I’ve been a fan of Maven’s optical lineup for years and have used several models in the field. Some of my favorites include the B1.2 10×42 binos and CS.1 15-45×65 spotter. Both optics proved their salt in the West’s most remote and rugged locales, and their clarity and low-light performance are solid.

Before we jump into the rangefinder game, we need to have a little Maven history lesson. Maven’s top-tier binos are its B Series line, and its mid-grade, more budget-friendly options are the C Series. The only difference in their spotting scopes is the B is replaced with an S in the elite line.

Maven’s latest rangefinder—set to hit the market in early November—is part of their C Series, making it a mid-level rangefinder built for the hunter on a budget ($295) that still demands a top-end product. Here’s how it performed.

The first thing I noticed on the new CRF.1 rangefinder was the traditional Maven colors—burnt orange liners blended with gray and black—that are stylish, for sure. I also noticed that the rangefinder isn’t super compact but rather chubby and long. Not too long or too bulky, but these are indicators that Maven built the rangefinder on a budget.

The ergonomics are excellent, and I applaud the grey rubberized coating that covers most of the rangefinder’s exterior makeup. I used the rangefinder several times in the rain during testing, and I appreciated the rubberized coating very much. It ensures a positive feel and grip. The burnt orange focusing dial is a tad stiff and hard to grip, but it gets the job done.

Before I started tinkering with the rangefinder’s guts, I wanted to look through the glass. The 6×22 magnification is solid—transparent and gathers light well in all lighting conditions. I was very impressed. The CRF.1 feels balanced in hand and is tripod adaptable as Maven brands it with a reflective range of 2,000+ yards. Although, the best I could get was 1,854.

Satisfied with the ergonomics and glass, I became familiar with the CRF. 1’s display and internal settings. Before I could do that, the battery door had to be opened and a plastic card removed. Removing the card activates the rangefinder, and I love the locking battery door design. I was glad to see that this door is labeled with locked and unlocked symbols.

The red LED reticle display is bright and clear. I wish Maven would have made the inside lettering and aiming reticle a tad larger, but that’s just me. It took some time to get used to, and I appreciate that the LED readout didn’t take up the entire screen, but still, just a bit more prominent on the next one, Maven, please.

The rangefinder also has a trio of aiming reticle options (Crosshair, Bracket, and Square). You can toggle through these quickly via the same method you used to switch from LOS to COMP, only this time, after holding down the DISP/MENU button for three seconds, use this same button to mauver to the rangefinder’s reticle menu.

As for LED brightness, Maven notes that a built-in light sensor reads ambient light, and an internal software system adjusts the red brightness intensity. I’m not Einstein, but I’d say the system works well. The readout was never blurry or hard to see, and I tested it in every lighting condition possible. The CRF.1 can also be switched from yards to meters easily.

Maven’s CRF.1 6×22 sports FLD (Field) and FOR (Forest) buttons. These two buttons are also the up/down when navigating the menu.

When hunting the plains, prairie, or virtually any open area, use the FLD button. All it takes to engage this feature is a press of the button. I recommend pressing the FLD and FOR buttons multiple times while looking at the reticle. Doing this allows you to see how quickly the rangefinder changes settings—you’ll see the settings change via a red readout—and you’ll get used to using your other hand to navigate the menu.

The FOR mode is recommended when hunting in timber or ground covered in brush. In layman’s terms, the FLD button will help you acquire small, hard-to-hit targets and ignore larger objects in the background, and the FOR button should be used when you want to know the distance of targets located behind brush or cover.