We put the Old Town Bigwater PDL 132 to the test in a variety of saltwater fishing situations along the West Coast. Here's what we found 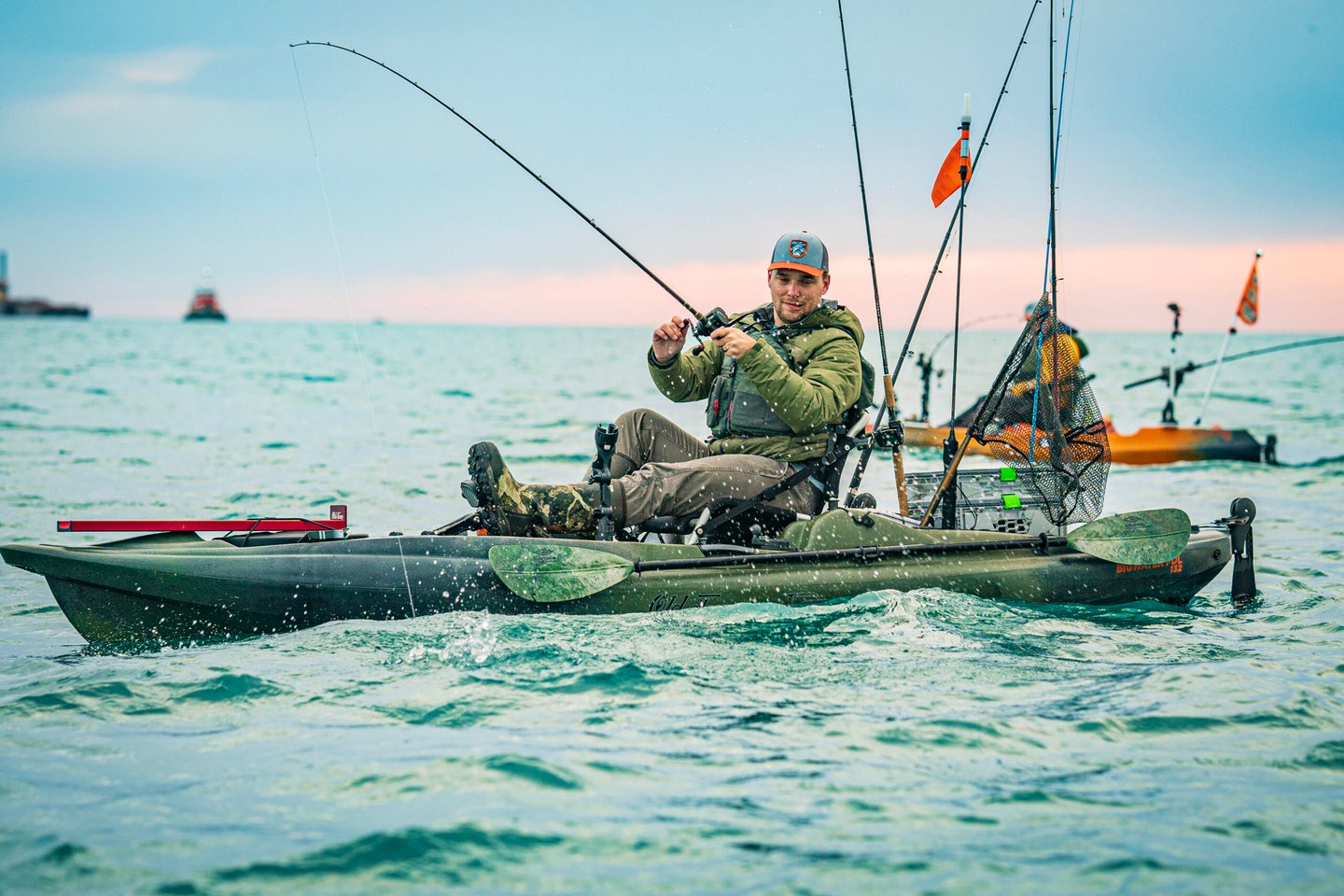 When I first moved to the West Coast, I was disappointed by the fishing. The nearby fly fishing opportunities were minimal compared to what I was used to back in Colorado. The bass fishing didn’t seem to be especially notable, at least from shore. And ocean fishing from charter boats was damn expensive.

But my disappointment quickly turned into excitement when I got my hands on an Old Town BigWater 132 PDL fishing kayak and started hitting the salt. From catching halibut in the San Francisco Bay to chasing rockfish and lingcod off the Sonoma Coast, I’ve been putting my BigWater 132 PDL through the wringer—and it has exceeded my expectations at every turn. It’s a reliable, versatile, and fully-featured fishing kayak, and I’m convinced it’s one of if not the best options for saltwater kayak fishing on the market today. Here’s why.

Old Town is synonymous with canoes. The company, based in Old Town, Maine, built its first wood canoe in 1898. Nearly 125 years later, the company is still churning out well-made canoes, including its wildly popular Discovery 119 model—a maneuverable, solo kayak.

In recent years, Old Town has branched off beyond its canoe-centric origins. In the mid-1990s, the company started investing heavily in kayak production—and the move paid off. By 2000, kayak sales were outpacing canoe sales. The company would soon capitalize on the kayak fishing craze of the 2000s, becoming one of the top-two names in the industry, alongside its rival Hobie. In 2013, the company introduced its Predator Series—a lineup of sit-on-top kayaks geared specifically toward fishing by including pedal propulsion, an extra-stable platform for fishing, and storage and accessories tailor-made for anglers.

In 2020, Old Town launched its Sportsman Series, which was an update and expansion of its Predator Series, and in 2022, the company updated the Sportsman Series. The 2022 BigWater PDL 132 is a revamped version of the Predator PDL, featuring updated seating and color options. Out of their current lineup, it’s the option best geared towards ocean anglers willing to pedal. Other than the BigWater 132 PDL, the Sportsman Series has 6 other options, including two AutoPilot™ motorized kayaks, which boast a game-changing Spot-Lock Technology, several smaller pedal and paddle kayaks, and one fisherman-friendly canoe.

How I Tested the Old Town BigWater PDL 132

I received my Old Town BigWater PDL in April and have launched it several times a month since then. I have primarily used the kayak for saltwater kayak fishing—which is really what it’s made for. I’ve fished both inshore and offshore in a variety of water conditions, including high swells and wind.

I’ve also targeted a variety of different species from the kayak. I’ve drifted for halibut in relatively shallow water near beaches. I’ve taken the kayak into deep water scenarios to fish for rockfish and lingcod. And I’ve put the pedals to use while trolling for chinook salmon in open water. I’ve gone as far as 10 miles in one day, and I’ve maneuvered the kayak in close proximity to other kayaks and structures. A lifelong angler, I paid special attention not only to how the kayak dealt with different water conditions but to how its features impacted my fishing. Could I really fish hands-free? Was there enough room for all of my tackle and gear? Was the pedal system efficient enough for trolling? This is what I found.

Stability: You need your ocean kayak to be stable—and the BigWater 132 is. As a 13-foot-plus boat, it feels very solid in the water. If you’re facing swells head-on, the kayak is nearly untippable. If you let yourself get positioned sideways of waves, it is possible to tip over—but that’s true of any kayak.

Speed: Man, the Old Town’s PDL Drive system works well. It’s easy to set up and once you get going, the kayak flies through the water. Unlike most other pedal kayaks, the Old Town PDL system pedals in a circular motion, like a bike. This makes it especially efficient on the water. The long shape of the kayak tracks well, which means you can put in some serious distance while trolling—and its speed can be especially valuable if you find yourself fighting the tide or the wind. Personally, I’ve really enjoyed pedaling the kayak—it gives you a nice workout while keeping your hands free to fish. The rudder system is easy to manage, and you can lock it when you want to set a straight course. The easy-docking system allows you to disable and enable the pedal system quickly when you’re launching and docking in shallow water.

Comfort: Several other anglers have come up to me to marvel at the Old Town BigWater 132’s seat—and for good reason. It’s super comfortable and provides the perfect blend of support and softness. My butt never gets sore, even after a long 10-plus-hour day on the water. That means I can keep my line wet for longer—and focus on the task at hand.

Storage Space: The fishing kayak has ample storage space throughout. The large stern tank well is very roomy and comes equipped with a special bag to hold a battery for your fish finder. The seat has a space for a tackle box and a tray of bait right underneath it. There are two side-storage compartments to keep other important pieces of equipment within arm’s reach. The back of the kayak also has good storage space, which can be easily secured with a bungee cord. There are three built-in rod holders, as well as a cup holder. What more could you possibly want?

Customizability: The Old Town BigWater 132 PDL comes ready for each angler to make it their own. The four accessory tracks let you quickly install—and reposition— any accessories from a visibility flag to an extra rod holder. The kayak comes with a universal transducer mount that makes installing a fish finder—like the Garmin STRIKER Plus 4cv, which I have—quick and easy. There are also two replaceable mounting plates, meaning you can drill and install other accessories without worrying about causing any permanent damage to your boat. These features make the kayak something each angler can tinker with for years to come as they fine-tune their setups.

Weight: The assembled weight of the kayak comes in at 122 pounds. Without the pedal console, the boat is just above 100 pounds. That is not light. With two people, I have no issues loading and unloading the kayak onto my car’s kayak roof rack. But when I’m alone, it’s another story. The extra weight makes it challenging to safely load the kayak without help. Most of the time, I’m able to ask a fellow kayak angler to assist me, but that’s not always the case.  For exactly this reason, one of my friends uses an Old Town Sportsman PDL 120, which shaves off a couple of pounds and is less cumbersome. And let’s face it, the days where you need the extra speed and stability of the BigWater 132 PDL, compared to the slightly smaller 120, are few and far between.

Turning Radius: There are no two ways around it: The kayak makes wide turns. In open water, this isn’t an issue, except perhaps if you’re trying to hand something to you one of your buddies. Then, the wide turns are really just a minor annoyance. For most saltwater fishing purposes, the wide turning radius isn’t an issue, but if you’re hoping to use your kayak to navigate structures in close quarters, say while bass fishing, it could be.

Mesh Fabric: I may be splitting hairs here, but I’m not a fan of the mesh fabric used for the seat—and the storage space underneath it. Old Town says it provides “ventilation,” but I think it’s a magnet for stray hooks. Line management while kayak fishing can be challenging, and if you’re fishing with barbed hooks, it’s not hard to get your rig embedded in the mesh. Then, your only recourse is to cut it out.

All in all, the Old Town BigWater PDL 132 is one of the top options for saltwater kayak fishing. It’s a sturdy watercraft replete with angler-friendly features, not to mention a literal boatload of storage space. If you’re serious about hitting the saltwater, both inshore and offshore, in a kayak, you’d be hard-pressed to find a better option on the market today. The BigWater PDL132 is a great option for beginner and experienced kayak anglers alike. I can’t wait for the next chance I get to hit the water in mine.