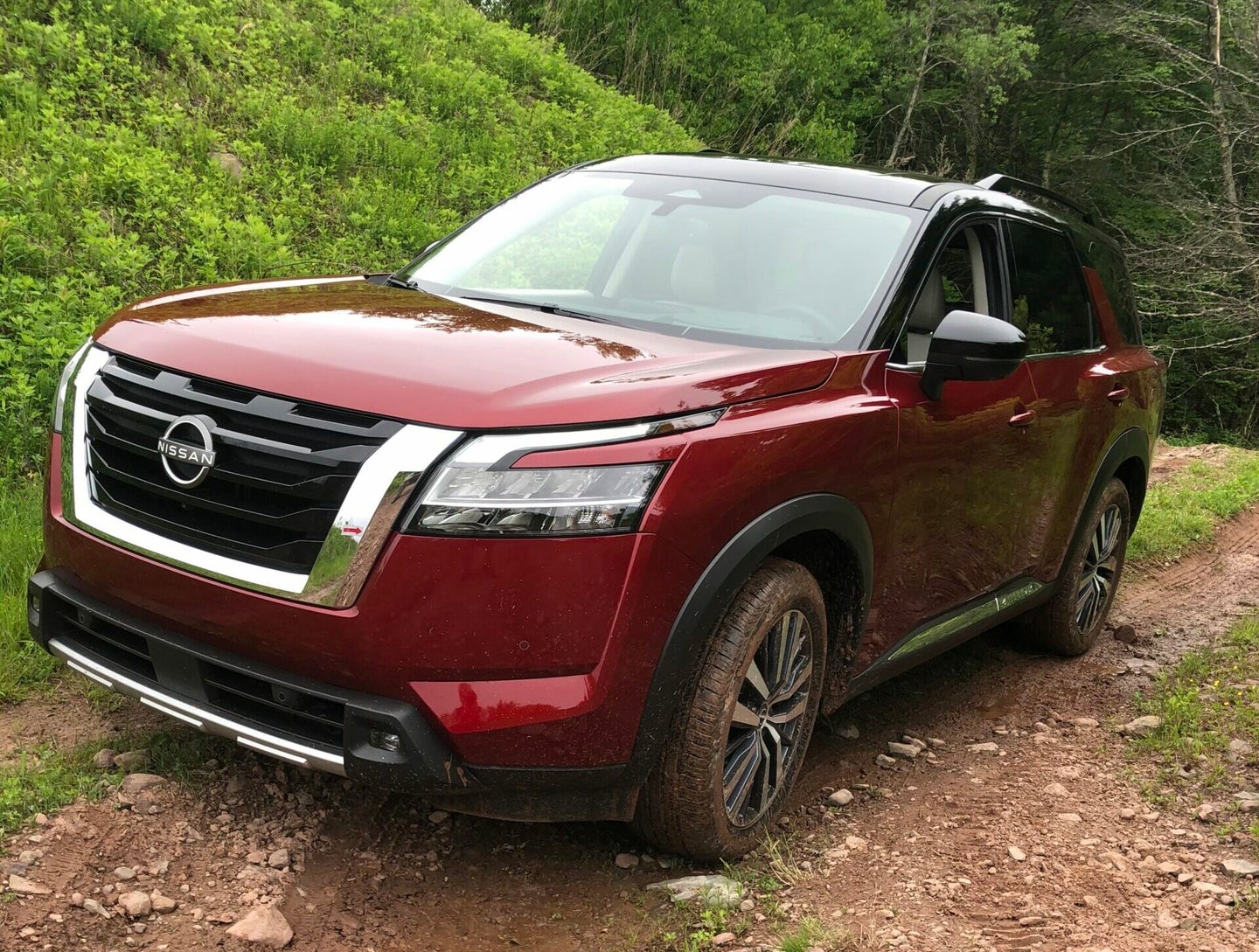 Now, here was an interesting situation: The nose of the SUV was pointed up, and I had no view of the trail that dropped steeply away in front of me. The trail also broke left just over the crest, so I would be steering blindly through the turn before the descent began in earnest. And there was mud. A lot of mud, in fact—the remains of several days of unrelenting rain.

Nissan first launched the Pathfinder SUV in 1986. It’s gone through several redesigns over the years, culminating in the fifth-generation 2022 Pathfinder in which I found myself one morning last week in the foothills of the Catskill Mountains.

The designers of the new Pathfinder faced the same issues that designers of other SUVs have faced over the years: finding the right balance between functionality and comfort. A new generation of truck owners craves offroad capability, but they also demand to be cosseted in comfort as well. Sometimes the results aren’t so impressive, as evidenced by a redesigned full-size SUV I looked at a couple of years ago; all of its legendary offroad capability had been sacrificed on the altar of luxury.

Fortunately, the 2022 Pathfinder has not gone down that road.

In conducting research with current Pathfinder owners, Nissan engineers learned that its target audience wanted a vehicle that could get them into the rugged outdoors. But they also insisted on a vehicle that could ferry their children to school and soccer matches. In a nutshell, these owners demanded that the new Pathfinder offer a balance of features that would allow it to operate in two different worlds. Tall order.

One non-negotiable demand was real three-row seating, which the Pathfinder meets through the use of an innovative second-seat design that allows third-row occupants to gain easy access even when the second row is fitted with forward-facing child seats.The top-of-the line Platinum that I drove certainly met these objectives.

I often hear from hunters and fishermen that SUVs have just gotten too fancy (read expensive) for their tastes. But the SUV market long ago went mainstream, and the mainstream market doesn’t desire bare-bones trucks. And though many outdoorsmen would prefer to own a vehicle devoted exclusively to hunting and fishing pursuits, the reality for those with families is that they need a vehicle that can do double duty. The new Pathfinder easily passes that test.

For the purposes of this review, I’ll stick with the rugged side of the Pathfinder rather than the comfort side.

How the 2022 Nissan Pathfinder Performed

At the top of that hill, a Nissan rep told me to engage the nine-speed transmission’s hill-descent program. Back in the day, the way you tackled a steep slippery slope was to engage low-range 4WD, shift the transmission into the lowest possible gear, and let it rip. The first few feet are essentially a free fall until the engine braking catches up and slows down the vehicle. The last thing you want to do here is step on the brake pedal. Doing so essentially ensures wheel lock and a nasty out-of-control decent, the ending of which is not pretty. Modern hill-descent settings perform the same task but much more quickly and efficiently. Indeed, the only really dicey part of that descent was making sure I entered that left turn properly. Once the nose of the truck was pointed downhill, the truck slowed to a fully controlled crawl with no further input from me.

A bit farther down that trail, as I was exiting a deep mudhole, I had to make a sharp right-hand turn to set up a hill climb. I failed to get the proper momentum and stalled halfway up in a muddy rut. I had to shift into reverse and back slowly down to regain solid footing. I’ve done enough offroading over the years to know this can end in disaster when a trail, such as the one I was on, is lined with trees. You have very little room for error. But the high-definition rear and side cameras outlined the proper retreat. At the bottom of the hill, I gave the engine a bit more throttle (not enough to spin the wheels) and climbed up and over the hill.

On my second run, the Nissan rep at the top of that nasty descent told me, “For this run, turn on the front camera.” I did as he requested, and that camera, positioned low on the vehicle, showed me that left hand turn. Instead of steering blindly into the turn, I simply followed the route outlined by the camera. Easy.

The course, laid out by ATV enthusiasts, was far more demanding than the kinds of trails most hunters and anglers will encounter on the way to a remote trout stream, duck blind, or deer camp. And though climbing into the posh interior of the 2022 Nissan Pathfinder is like being fitted for a bespoke suit, underneath all that you’ll find it really does have the guts to get you out there and back.

Specs on the 2022 Nissan Pathfinder