Winchester improved upon an already good thing with the introduction of their latest non-toxic shotshell offering. 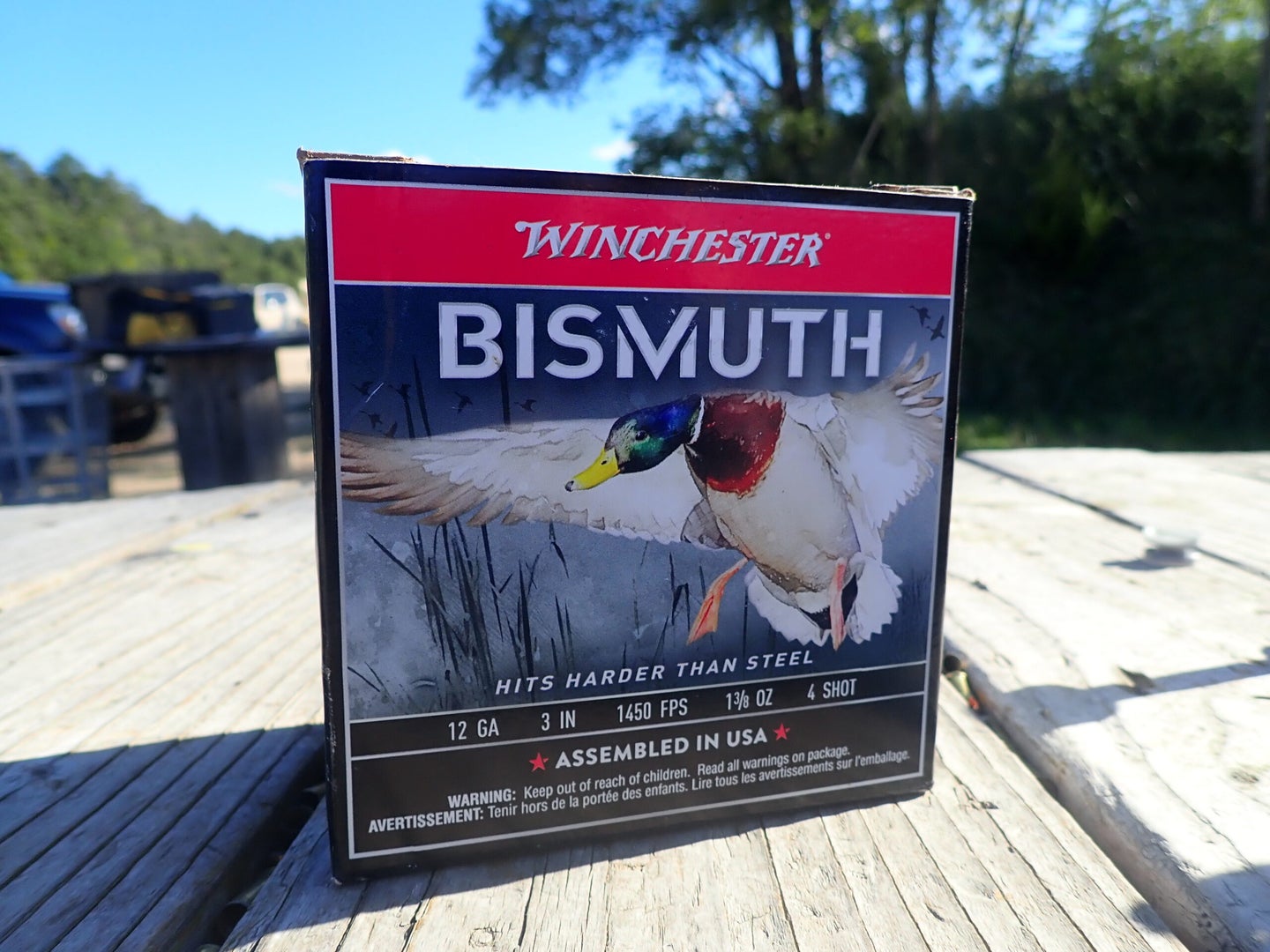 Bismuth shot has some waterfowlers remembering the good old days when lead was legal. Bismuth pellets are considerably heavier than steel, and deliver much more punch when they reach their target. They provide cleaner kills, and reduced crippling rates. But it’s not without its issues. Winchester’s new bismuth load sets out to overcome some of bismuth’s inherent faults. The new load delivers impressive patterns. And more importantly, more of the payload makes it downrange. The result is a load that outperforms other bismuth offerings.

The differences in shot performance can be attributed to their elemental make up. If you look at the periodic table, you’ll notice bismuth (Bi) is just to the right of lead (Pb), which has been the gold standard for almost as long as shotguns have existed. This means that its atomic weight is slightly higher, and as a result of the increased density, similar volumes of bismuth are heavier. The difference is negligible, but bismuth does have a slight edge.

Another important stat we can glean from the periodic table is the hardness of these two elements. Though they reside right next to each other, they are very far apart on any hardness scale. One of the most common of those is the Brinell scale, which is measured by pressing a carbide ball against a piece of metal for a period of time and recording how deep the indentation is.

Lead has a Brinell scale rating of 38.3, indicating that it is pretty malleable. But you didn’t need me to tell you that, you’ve likely crimped split shot to monofilament using your teeth before. But you’ll have a hard time accomplishing the same task with bismuth, which has a rating of 94.2 — more than twice the hardness of its neighbor.

Steel, which is used in the majority of non-toxic shotshells on the market, isn’t an element but rather an alloy composed of a little carbon (C) and a lot of iron (Fe). Iron is extremely hard (490 on the Brinell scale) and very light by comparison (an atomic weight of 55.8, bismuth is 208.9). But it is relatively inexpensive and readily available, so it is found in most waterfowl loads.

As we all know, heavier projectiles tend to hold onto their energy longer. This makes bismuth considerably more deadly than steel shot. It also allows you to use smaller size to deliver similar energy downrange, which lets you pack more pellets into the same size shell. The means that patterns are fuller, with less holes for ducks and geese to sneak through.

Bismuth’s hardness actually works against it when used as shot. It’s not as hard as steel, but not malleable like lead. So, individual pieces of shot have a tendency to shatter when they crash into each other. To mitigate this some, most manufacturers mix anywhere from three to six percent tin in to make the resulting alloy less frangible. Typically, this keeps the shot hard enough to hold together, but soft enough to be used in tight chokes and barrels that pre-date steel shot proofing.

Still, bismuth shot remains fairly fragile, and some will break up before they reach the intended target. This typically only affects a small portion of the payload located toward the bottom of the shell, which are most directly impacted by the combustion of the powder and encounter more resistance from the shot in front of it.

Winchester’s Ben Frank explained this to me as we sat in a goose blind in South Dakota, but I had to see it for myself. He suggested shooting my favorite bismuth loads at a piece of patterning paper and looking for the dimples that the small shards create. The smaller pieces of bismuth don’t have enough energy to make it through the paper, and will simply leave an impression. Sure enough, I noticed plenty of dents throughout the pattern.

Winchester sought to solve this problem by filling the airspace in the shells with a buffering material. While I didn’t get the exact make up of this from Frank, most buffering compounds are designed to absorb shock and provide lubrication. They cushion the rapidly accelerating shot charge from the combustion below and from the pellets alongside. The dampening this provides keeps the pellets from bouncing off of each other, and the shot better aligned throughout the bore.

The better alignment results in better patterns. Winchester claims as much as 50 percent more pellets in a 30-inch circle at 60 yards. I try to limit my shots to 40 yards or under even when using performance loads like bismuth, so I set up my patterning board at 30 yards. The results were impressive with the three guns we utilized: A Benelli Super Black Eagle III, a Beretta A390, and a Remington 870; all sporting factory modified chokes. Each threw a pattern no duck could make it through.

But perhaps just as important as the distribution of the pellets was the penetration. Unlike the other load we pattered, there were no dimples from shattered shot that didn’t have enough energy to make it through. Each individual pellet held together through the thick stock, and would likely do the same in a duck or goose. I had already seen that firsthand.

I joined Browning and Winchester at Flatland Flyways in September to test some firearms and shotshells. Amongst the loads we were shooting at the big resident Canadas was Winchester’s new bismuth in #4. That shot size may seem small for a goose load, and if we were talking about steel I would agree with you. But the added punch provided by the extra weight lets you step down a bit in size, and the additional pellets help make clean kills.

The Flatland crew had done their diligence, and found some hot feeds. But hiding 10 or more people in terrain that is flat for as far as the eye can see is no small task. The A-frames we were hunting out of were grassed well and the decoy spreads impeccable. It was enough to pull any geese that were looking to eat in front of our guns. Most of the shots were easy feet-down pokes right in the dekes.

Even with the excellent spread and good hide, some of the wary residents knew something was up. While no one in the group took anything that could be judged as an unethical shot, some barrel stretching did occur. The added energy provided by the heavier bismuth pellets dropped the giant honkers with ease, even right at the edge of the 40 yards I consider to be the boundary on geese.

Overall, I was very impressed with the new load and looked forward to seeing what it could do in a mixed bag situation where both ducks and geese could visit the decoys at any given time.

I was fortunate enough to take a box of the new bismuth loads home with me. I used a handful of shells at the range, but held onto the rest in anticipation of duck season. The first split brought black ducks and brant, with plenty of wind. Even on days when the wind was howling at 35 miles per hour, the shells did their job. Black ducks dropped stone dead out to 35 yards, and brant were belly up when they hit the water.

I can also attest to the effectiveness of the lacquered primer and the double seal wad. Hunting black ducks on a coastal marsh means dealing with the tide. The contents of my gunning bag always seem to fall victim to the flood tide when hunting potholes, and saltwater isn’t kind to shotshells. These tasted the brine a couple times, and even though they suffered some surface rust, they went bang when I pulled the trigger.

Buffered shells are nothing new. Handloaders have been building specialty buffered shotshell loads since the 1970s. Winchester has been producing a boutique buffered load aimed at turkey and waterfowl hunters in boxes of 10 since 2018. But the new loading promises increased performance at a more affordable price point. While I haven’t seen the street price yet, it is supposed to be in line with other bismuth loads on the market, offering greater performance at a similar price.