Whilst soaking up the local culture in Montana, I happened on a young man who was carrying a Model 1911... 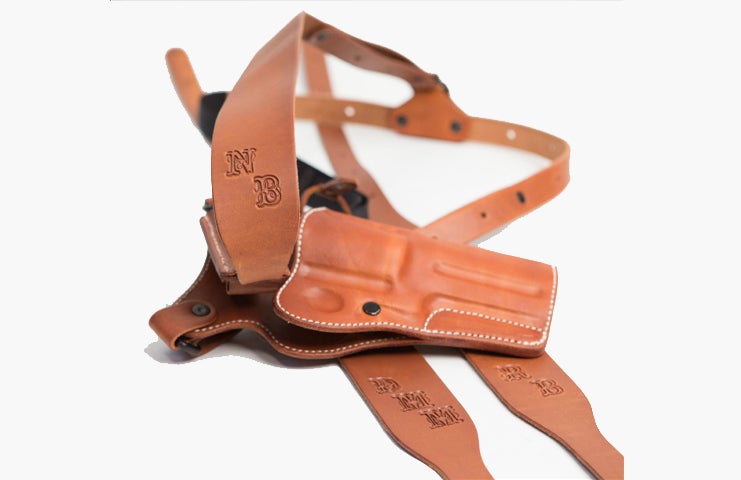 Whilst soaking up the local culture in Montana, I happened on a young man who was carrying a Model 1911 in a rig that I had not seen before.

“Excuse me,” I said to the Montanan who was showing me around, “but are you aware that this young man is heeled?” “Of course I am,” said the young man, “I’m an American,” which says it about as well as you can say it.

The holster in question is called The Guide’s Choice, and is made by Diamond D Custom Leather in Wasilla, Alaska. If Wasilla sounds familiar, it’s because that’s where Sarah Palin lives when she’s not doing her Tina Fey imitation.

The reason the Guide’s Choice interested me was because on principle I like shoulder holsters (Diamond D refers to this as a chest holster, which is more accurate) for carrying heavy weaponry, but have never had a good experience with one and ended up getting rid of them and having my trousers hauled on by a belt holster.

The shoulder holsters I experimented with were difficult to adjust, uncomfortable once adjusted, did not allow the handgun to be drawn quickly, and did not keep it out of the way when you were not engaged in shooting something. Aside from that they were fine.

The Guide’s Choice overcomes all those problems. It appears to be based on the Army’s M7 shoulder holster for the 1911 pistol, which was developed during World War II when tankers and other life forms found that the standard holster, which attached to the M-1936 pistol belt, was ungodly awkward in the confines of a Sherman or similar death trap. The M7 was very simple, very rugged, and was used by a lot of people besides tankers.

Unlike a conventional shoulder rig which places a handgun vertically or horizontally under your arm, the Guide’s Choice locates it at an angle between the level of your belt and your solar plexus, depending on how tall you are. There’s one strap that goes over your right shoulder and takes the weight of the gun, and a second strap that goes around your torso and keeps it snug against your body. You can adjust the fit via the strap around your body and by means of screws that hold the straps to the holster itself. I expect that if he used all the adjustment length available, Dwayne Johnson could get a good fit. In any event, it’s extraordinarily comfortable. Wear it for 5 minutes and you’ll forget you have it on.

You can even adjust the holster tension on the handgun, although mine fit an S&W Model 629 fine right out of the package. The Guide’s Choice is not for concealment. Even if you have a coat over it you’re going to be sporting a couple of odd lumps and bulges. It’s designed to carry a large, heavy handgun for long periods of time and keep it readily accessible and out of the way until you need it. I had not heard of Diamond D before, but they do very nice work. This is a very well made rig and it’s obvious that a lot of thought went into it. There’s a keeper strap with a pull tab that fits over the hammer as extra insurance against loss, and you can get a six-round bullet loop set, or a speed loader pouch, or a magazine pouch as an accessory. The MSRP is $170. Diamonddcustomleather.com