More than 100 years since its debut in 1912, the .375 H&H remains one most versatile rounds for hunting large game anywhere 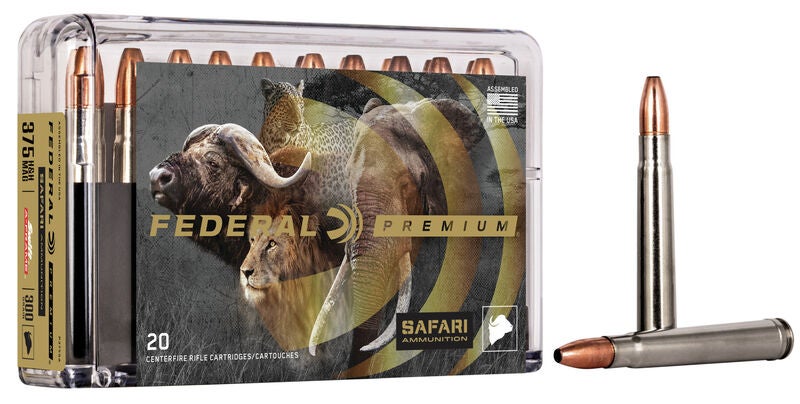 “Undoubtedly one of the deadliest weapons in existence….I’ve had five of these rifles…and have fired more than 5,000 rounds of .375 H&H ammunition at game. The animals included most species from elephant on down. One of [the rifles] accounted for more than 100 elephants and some 411 buffalo besides rhino, lion, and lesser game….In fact, there is no other weapon in existence with which such a wide variety of animals can be shot with an equal degree of certainty and satisfaction….” –from “African Rifles and Cartridges,” by John Taylor, circa 1948

Taylor, who went by the name of Pondoro, was a professional hunter and ivory poacher who was active from the early 1920s to the early 1950s when much of Africa was truly wild and game existed in uncountable numbers. He was intensely curious about the tools of his trade, and he got to use everything in the course of his career. If he says he fired 5,000 rounds of .375 H&H at game, I believe it. Pondoro loved the cartridge above all others, apparently, and he had a lot of company.

The .375 H&H got its start because, just after the turn of the 20th century, Teutonic gunmakers had the gall to invent medium-bore metric cartridges and chamber them in Mannlicher and Mauser bolt-action rifles. The 9.5x57mm Mannilcher and the 9.3×62 Mauser offered farmers, ranchers, and meat hunters rifles that were versatile enough to slaughter antelope to feed the farmhands and bash the occasional buffalo in the grain fields, and at probably one twentieth the cost of a British double.

Outraged, London gunmakers responded with a variety of competitive cartridges, the most successful of which was Holland & Holland’s .375 , which debuted in 1912. Chambered in that company’s Mauser 98 sporters, it was a sensation.

The .375 H&H, which is the father of untold newer cartridges, is based on a long case that requires a magnum-length action. It has significant body taper because it was designed to be loaded with Cordite, a long-obsolete* explosive (not propellant), which looks like uncooked angel hair pasta and does not fit easily into bottlenecked brass. Because of all the body taper and the largely nonexistent shoulder, it was difficult to get the shells to headspace accurately, so H&H came up with a belt at the base of the case, which solved the problem.

There was an unintended benefit to the shape of the .375 case: It would slither in and out of a chamber like a well-oiled mamba, even in extreme heat when pressures were high. This is still a very strong selling point.

Originally, there were three loadings: 235-, 270-, and 300-grain bullets, the last available in both soft-point and solid versions. Holland’s sales strategy was that, with these three bullet weights, a British sportsman could travel the world with a .375 (remember, at that time the sun never set on the British Empire) and hunt anything.

H&H reasoned that the three bullet weights would group close enough together that you would not have to fiddle with your sights when switching species.

However, I’ve owned  eight .375s, and I’ve found that not only have none of the rifles grouped bullets of different weights together, but the accuracy varied wildly. A .375 that shot 300-grain slugs into cloverleafs would spray 270-grainers all over the target. Or vice-versa.

The only bullet weight that really makes sense is the 300-grain slug. If you stick to it, it will do everything you want. If you go screwing around with different weights and bullet types, eventually you are going to stuff the wrong thing in the magazine and have a mess on your hands as a result.

Be discerning in your choice of bullets. Big bullets are not necessarily strong bullets, and you want strong above all else. My first experience with the .375 H&H came in 1978 and involved Remington 270-grain Core-Lokts which blew up on a zebra, which resulted in a horror show, which gave me religion real quick. When I went back to Africa in 1981, I handloaded 300-grain Nosler screw-machine Partions, which did fine, as have the newer Partitions.

Since then I’ve used 300-grain Trophy Bonded bullets, 300-grain Swift A-Frames, and 300-grain Hornady DGS solids. All are excellent. I think the best soft-nose is the Swift; it expands reliably and penetrates nearly as well as a solid while retaining 95 percent-plus of its weight.  If you say “A-Frames” when your PH asks you what kind of bullets you’re using, you’ll see him smile as if he had narrowly avoided stepping in leopard sh*t, which is terrible stuff.

Will the .375 H&H handle the long shots?, you ask. To which I reply, no. I sight mine in 2.5 inches high at 100 yards, which does just fine out to 200. Beyond that I allow a little Kentucky windage to get me out to 250. Beyond that I get closer. This is called hunting. I realize it’s becoming an alien concept, but you’ll find that if you insist on taking long shots, your PH will have a chat with you that will involve a refund and how soon you can get ready for the drive to the airport.

Now we must talk about old nyati. I’m aware that Cape buffalo in the tens of thousands have been taken with the .375 with nary a scary story to tell, and that lots of PHs use .375s as backup rifles. But I can’t forget that the first four buffalo I killed were taken with a .375, and while it caused them to expire, it did so in a leisurely fashion. I vividly recall No. 3, standing broadside on a little rise, taking bullet after bullet in the shoulder, looking at me as though I were a particularly noisy oxpecker, or something else mildly interesting. The animal finally keeled over, possibly from the accumulated weight of all the lead. My reaction was to hunt buffalo with bigger rifles. The buff that I’ve shot with the .458 Winchester, .458 Lott, and .416 Remington, have gone down right away, never to rise, all the fight bashed out of them.

What to Look for in a Rifle Chambered for the .375 H&H

Finally, a word about rifles for the .375 H&H.  The reason I owned so many of them was mainly because most were way too light. The recoil of a 9-pound .375 H&H is about 38 foot pounds, which is not bad at all. (However, the average shooter can tolerate about 15 foot-pounds, max, so maybe it is bad.)

I achieved .375 perfection with a rifle built on a David Gentry Mauser action, a synthetic stock with two inertia recoil reducers in the butt, and a 22-inch No. 5 contour Schneider barrel. The recoil was 34 foot-pounds, but it was soft; a push rather than a jolt. The rifle was easy to hold steady from the offhand position (in the days before shooting sticks); you could get off fast repeat shots with it; and if you swung it on running game, it kept swinging. The total weight of the rifle, with scope, was 10½ pounds. This is generally considered appropriate for a .458. I think it was just fine for a .375 H&H.

If I were building a dedicated buffalo rifle, I would not pick the .375 H&H. Short of that, there is no more versatile big-game medicine on earth. I’ve made at least three one-rifle safaris with it, and I got the same results that Pondoro did. If you’re looking for one round to do it all, no matter what, here is your cartridge.

*Novelists, screenwriters, reporters, and other firearms illiterates use “Cordite” as a synonym for gunpowder. Cordite was widely used by British ammo makers during both world wars, but has not been loaded in small arms ammunition since 1945. It is classed as a low explosive; modern gunpowder is classed as a propellant.