The .30/06 Springfield vs. 7mm Remington Magnum

The .30/06 and 7mm Magnum are both proven big-game cartridges, but which one is better? 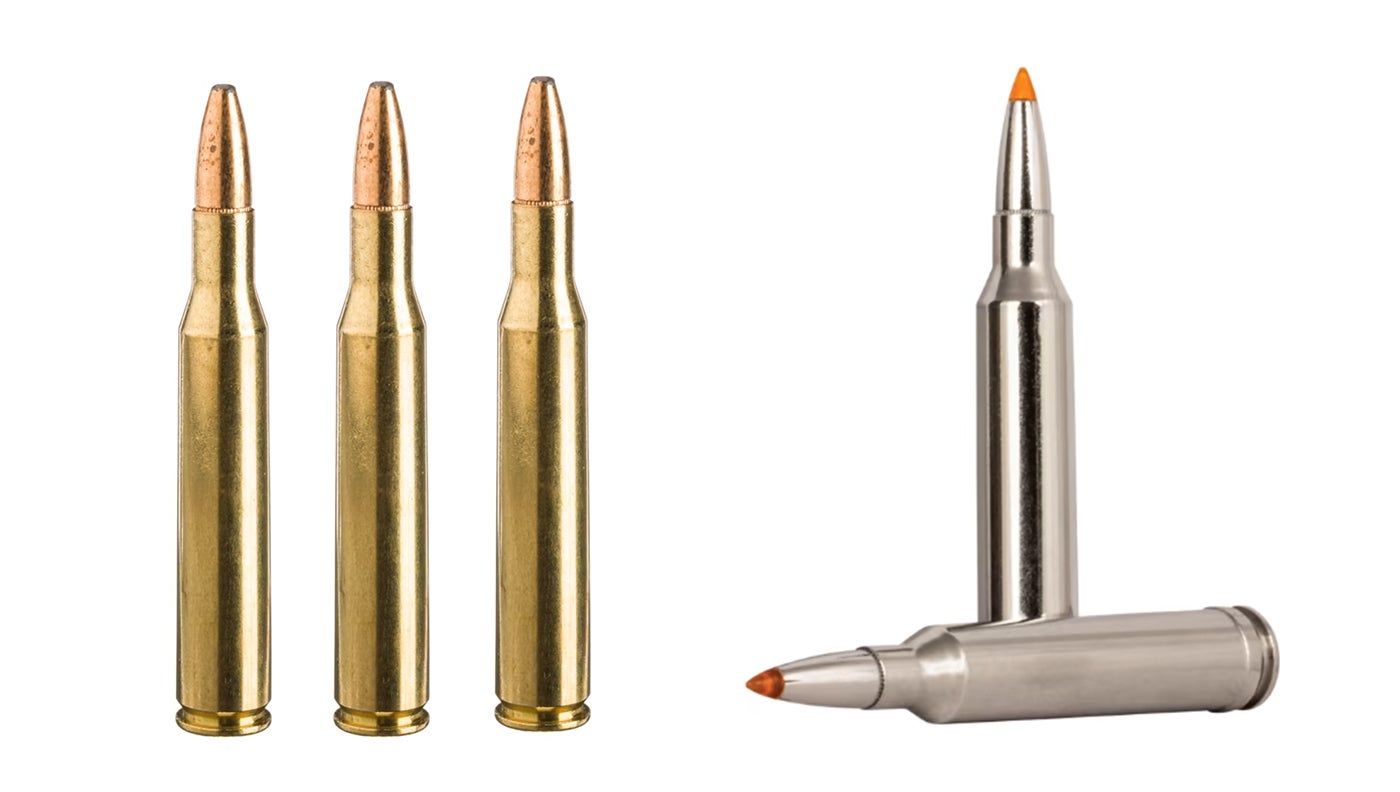 Only one of these classic big-game cartridges can win. Field & Stream
SHARE

The .30/06 and 7mm Remington Magnum are perennial companions on the “most popular cartridge” lists, which means that lots of people are opting for one or the other as their big-game cartridge of choice. But is one really better than the other? Ignoring the advice of St. Matthew (“Judge not, that ye be not judged.”) I’m here to tell you.

I got my first .30/06 rifle in 1965. Since then I’ve owned about a dozen and shot several times that number. I currently own two. I’ve done everything with the cartridge except rob banks. I got my first 7mm Remington Magnum in 1972. I’ve owned only two and done only a modest amount of hunting with them.

The .30/03, from which the .30/06 evolved, was developed at the Springfield Armory in 1903 to replace the .30/40 Krag. It fired a 220-grain bullet at 2,300 fps and was badly outclassed by the German 7.9mm Mauser round, which shot much flatter. The Springfield Armory, its face covered in ballistic egg, altered the .30/03 case to make room for more powder, went to a 150-grain bullet at 2,700 fps, adopted the 1903 Springfield rifle (Mauser sued them for patent infringement, and won), and the rest is history.

If you read Field & Stream issues from the 1920s, you see that the ’06 was regarded as far more powerful than it is today. This was before magnums, and because the ‘06 is, in fact, a powerhouse. It was marketed as The One Cartridge that Could Do Everything. Its loadings started with a ridiculous 110-grain bullet and ended with a 220-grainer that was pretty useful. The most popular loadings were 150 grains and 180. Today, that list also includes 165 grains. In both the 1903 Springfield and the M-1 Garand, the ’06 established a stellar reputation for accuracy.

The 7mm Rem Mag arrived in 1962, the brainchild of Remington designer Mike Walker. Walker opted for two loadings: a 150-grain spitzer for which 3,200 fps was claimed, and a 175-grain spitzer at a claimed 2,850 fps. The former velocity was mostly wishful thinking; you might get 3,100 with a following wind. The latter was fairly realistic.

The Remington round was a success from the get-go. It was effective, did not kick badly for a magnum, and people loved the big fat case, which bespoke power. The cartridge was substantially helped by the brand-new Model 700 rifle, which was very accurate.

The ’06 is a monument among rifle cartridges. It’s been around for 116 years and no one has come up with anything better. It’s been produced in the billions and has only two real competitors for versatility and breadth of use, and those are the .308 and the .303 Lee-Enfield.

The ’06 is way more powerful than necessary for most North American game, and because, due to improvements in powder and bullets, it packs so much more wallop than it used to, it can now take the place of much more powerful cartridges.

I found out very quickly after I got it that my 7mm Rem Mag would not do anything my .270 would do except kick more. I also found that when I chronographed the two cartridges there was not a pinch of dried owl dung between them. I also found that the best bullet weights were 160 and 175 grains. That was a lot of finding out.

The original advantage of the 7mm Rem Mag was its ability to hit distant targets with a minimum of guesswork. But with laser rangefinders and range-compensating reticles, and all the rest of it, that advantage has largely evaporated. Do your homework and the guesswork vanishes.

With any 7mm magnum, I’d avoid the 150- and 140-grain bullets that are available. With all that velocity, you’re going to make a mess, and if it’s at 100 yards or under, a hell of a mess. If you want to shoot at longer ranges the answer is not more speed but heavier bullets with higher BCs. Look very hard at the 175-grain weight. You may feel underprivileged because you’re only getting 2,800 fps, but they shoot flatter at long ranges and arrive with considerably more force than lighter bullets.

A .30/06 produces 17 foot-pounds of recoil on average, which is generally regarded as the most that an average shooter can handle. For decade upon decade, riflemen shot 06s with nary a complaint, but now that we have a generation weaned on the AR and its pipsqueak cartridges, the round may become an ogre.

The 7mm Remington Magnum, on the average, delivers about 20 foot-pounds of recoil. If you can tell the difference between 17 foot-pounds and 20, your shoulder is far more sensitive than mine, and perhaps you should take up pickleball instead of shooting.

Here, the 7 mag operates under two handicaps. First, it holds considerably more powder than the ’06. The case capacity of the 7 mag is 83 grains of water; the ’06 maxes out at 68 grains, and it follows as the day the night that the more powder you burn the bigger your groups.

The .30/06, having been our service cartridge for half a century, was used in sniper rifles, in military and civilian competition, and had whole forests chopped down for paper to print information on its care and feeding. Match-grade .308 bullets were, and are, available in profusion, as are match-grade brass, dies, premium loaded ammo, and so on.

None of this is true of the 7mm Rem Mag. It was, and is, a hunting rifle, period. If it groups in a minute of elk, that’s all anyone cares about. If you want tiny groups and you’re willing to work at getting them, you’re much better off with a .30/06.

7mm Remington Magnum Versus .30/06: Price, Variety, And Availability Of Ammo

This is not much of a contest. The .30/06 is one of the most widely distributed cartridges in the world. It’s loaded in every conceivable configuration, and in every price range. I think its only rival may be the .308.

The 7mm Rem Mag has always been pretty widely distributed for a magnum. It’s sold at higher prices and loaded to a higher level of quality than the ‘06 generally speaking. I’m informed that the 7mm Rem Mag is one of the victims of the Great Ammo Famine; the factories that produce it chose to turn away from modest-selling cartridges to the really popular rounds like 5.56 and .308.

7mm Remington Magnum Versus .30/06 For Effectiveness On Game:

You want me to waste your time? What one will do, the other will do.

A .30/06 will give you around 5,000 rounds of first-class accuracy. Due to its smaller bore size and heavier powder charge, a 7mm Remington Magnum will do half that.

7mm Remington Magnum Versus .30/06 For Ease Of Handloading

The ’06 can happily digest just about anything powder you feed it. The medium-slow-burners give the best results. IMR 4831 and Hodgdon 4831 work fine, as do Reloder 22 and 25.

The 7mm Rem Mag is strictly a slow-powder round. If I had to name a favorite, it would be RelodeR 25. Neither round has any quirks or pitfalls.

Read Next: The 8 Best Big-Game Cartridges

At this point, I’m obliged to print you out a bushel of numbers proving how one cartridge is superior to another at close, medium, and long range. Probably, on paper, a 175-grain .284 bullet at 2,800 fps will beat anything the .30/06 can do. However, if you were to shoot an ’06 loaded with heavy, high-BC bullets, you might get a surprise. The ’06 may not be a magnum, but in the real world, it has a very impressive record of hitting at long range.

My fellow Mid- and Long-Range competitors pay no attention to drop tables and ballistics charts. They shoot at targets, starting at 300 yards and ending at 600 or 1,000, and see where the bullets hit.

Winner: In theory, the 7mm Remington Magnum. In reality, a tie.

And the Winner is…

The .30/06. It’s been there, done it all, and excelled at everything. It’s enjoying something of a new lease on life because the new powders and bullets with which it’s loaded are so good, and because a few unusually intelligent ammo companies have discovered the 200-grain loading. The 7mm Remington Magnum is a sound, reasonably versatile round that is only marginally more effective than the .270 and the .280 and kicks noticeably more. Your choice.