Our rifles editor takes stock of the iconic hunting cartridge 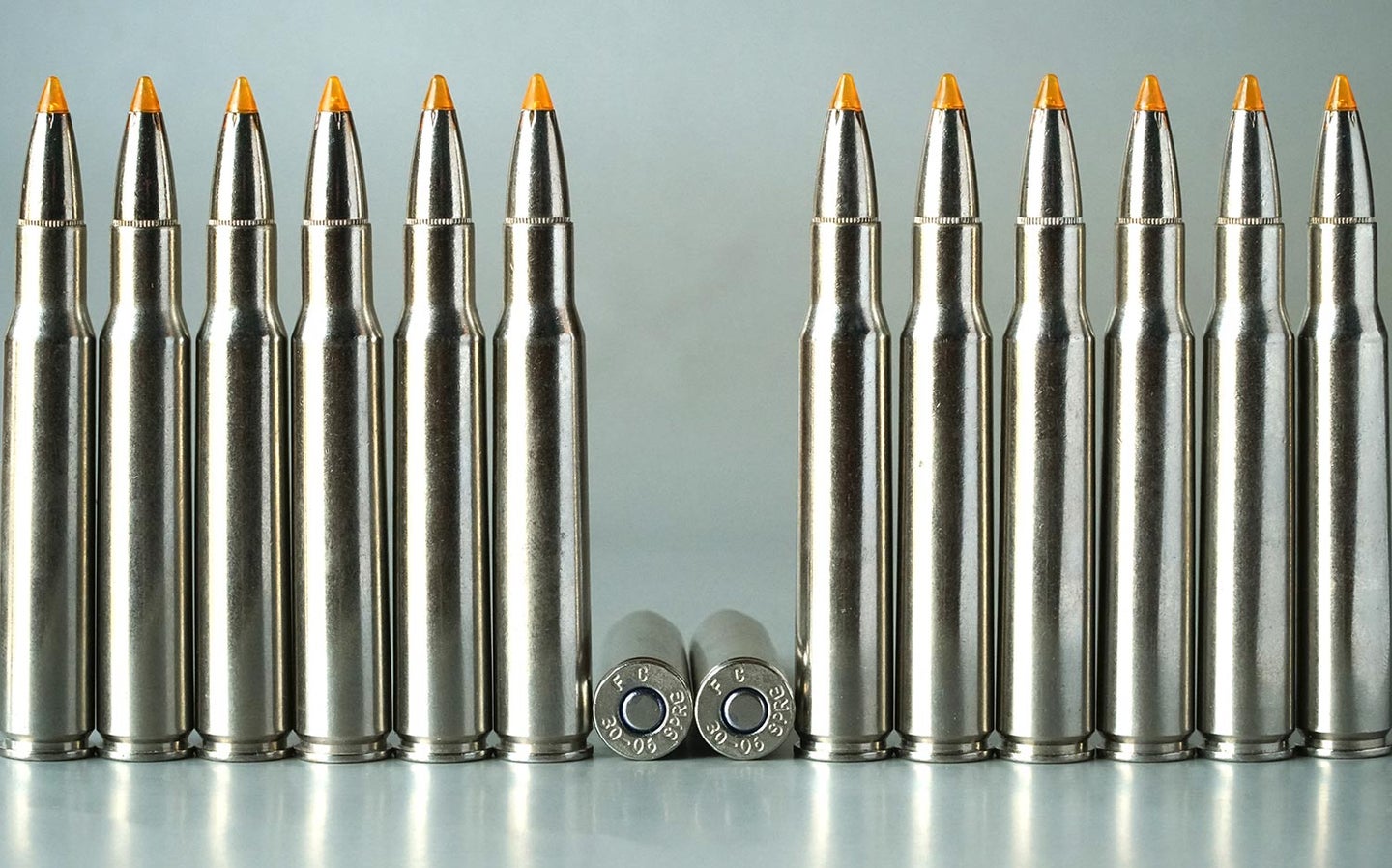 The first time I ever shot .30/06 ammo was in September, 1963, at what was then called the K-D (Known Distance) Range at Ft. Dix, New Jersey. I borrowed an M-1 from a First Sergeant named Houston, who was a nice guy (which is not necessarily incompatible with First Sergeantcy.) I shot Expert with it. That was my introduction to the ’06. It produced. It always produces.

The popularity of the .30’06 over its 114 years of existence is nothing short of stupefying. It always ranks among the top five hunting rounds. There are, according to Chuck Hawks’ blog, no fewer than 269 commercial loadings for it. The only rounds to outrank it are the .308 and the .223.

Why so popular for so long? Partly because any cartridge that becomes standard in our military inventory is practically guaranteed a long and successful commercial life. But there’s more to it than that.

The guts of it is that whatever you want the ‘06 to do, it will do. It’s too big for varmints and too small for the heaviest dangerous game, but it will handle both in a pinch. Give the ’06 something to put on the ground and down that animal will go. Grancel Fitz, one of the first men to take all 28 of the Boone and Crockett North American big-game species, did it over the 1930s and 40s with an iron-sighted .30/06 and nothing else.

The .30/06 has another virtue which I think was arrived at accidentally: It’s at the limit of what an average hunter can handle in the way of recoil. I don’t think its designers cared much about recoil. They just wanted something that could compete with the German 7.92mm service cartridge, and if our Doughboys got kicked, too bad. An 8-pound .30/06 firing a 165-grain bullet at 2,800 fps produces about 20 foot-pounds of recoil, and that happens to be just about what the typical hunter, who will not practice, can handle.

To put this a little differently, let me quote from the Book of Aagaard, Finn, to be specific, Guns and Hunting, to be even more specific, page 223 to really be a pain in the ass about it. Mr. Aagaard, in case you haven’t read him, was an African professional hunter who was blessed with enough experience and common sense for a dozen gun writers. He wrote: “The .30/06 is about the most powerful cartridge that can reasonably be chambered in a short and handy 8-pound rifle.”

If you go to the .300 magnums for long range, or the .338s for bash-’em-flat efficiency, you need to carry a 9-pound rifle, or endure the horrors of a muzzle brake, or you will get beat up. After you pay for that wisdom in sweat, you come to appreciate 8-pound rifles with 22-inch barrels.

I think the splendor of the .30/06 dawned on me when I went to Namibia in 2000. Up until then I would as soon have departed for Africa without my .338 as I would have left without malaria pills or a wad of $20 bills for bribes. But this time I got daring, and took an ’06 loaded with 180-grain Winchester Fail-Safes, which were very good bullets. I shot numerous animals, all of which went down with one round, and the only difference I could see between the ’06 and the .338 was that I was getting bashed a lot less.

The .30/06 has had its detractors. Leading among them was Elmer Keith, who had no use for it. Bob Hagel, who really knew his stuff, was a magnum believer to the core. Both cut their hunting teeth in the Era of Rotten Bullets, from which the .30/06 suffered along with every other cartridge. Keith learned that if you used a rotten heavy bullet of, say, 250 grains, its mass might enable it to hold together when a lighter rotten slug would not.

Hagel is more interesting, and I’m quoting him because he did more big-game hunting than most of us get to dream of. In his book, Game Loads and Practical Ballistics for the American Hunter, which was published in 1978, Hagel wrote the following about all-around cartridges in general:

What does all this [using one rifle for everything] prove? Maybe more than you think…. If you use the right load, are a good shot, keep cool when the time comes to shoot, and know where to place the bullet in the right spot where it will do the most good, you can get by with any good cartridge and load. It does not mean, however, that any one of these [all-around] cartridges or any other cartridge, stands bullet, neck, and shoulder above all other cartridges, and that it will perform feats that no other cartridge will.

Some hunters carry this blind faith in a certain cartridge even further out in left field…. They believe the .30/06 they use is the greatest cartridge ever spawned for everything from jackrabbits to polar bears….The point of all this is that if you intend to use the same cartridge for shooting all classes of game under all hunting conditions you should realize its limitations and not expect it to perform reliably beyond those limitations….

Hagel’s own preference for an all-around rifle? The 7mm Mashburn Magnum, the .338, or the .340 Weatherby.

Bob passed on in 2005, and I’d be very curious to know what he would think about the equipment we have today. Both he and Elmer Keith ignored one key component in this equation, however: the hunter himself. Most big-game hunters shoot badly. Give them a magnum, and their shooting goes from bad to atrocious. And the ear-splitting crack that comes with a muzzle brake may help your shoulder, but it will cost you your hearing in time, even if you wear headphones in the field. With the ’06, you don’t have these problems.

I’ve owned a bunch of .30/06s, but one sticks out in my mind. It’s a wood-stocked, Remington-action sporter built by Joe Balickie, a North Carolinian who was a rare combination of gifted gunmaker and imaginative artist. Usually, if you had Joe build you a rifle, you got dazzling wood, baroque checkering, and lots of little ruffles and flourishes to show how good he was.

This rifle was plain vanilla. Unfigured wood, simple checkering, and no acrobatics with the walnut or steel. It had inner beauty, though. Its lines were elegant, and like all of Joe’s rifles, it did not carry a microgram of excess weight. It was very accurate for the time (.750 to 1 inch typically). I sold it in 1987 during an attack of sh*t for brains, and if whoever owns it feels like selling it back, name your price.

Finn Aagaard: “It [the ’06] works beautifully on nearly anything.”

Townsend Whelen: “For all North American game a good .30/06 is never a mistake.”

Colonel Whelen wrote that in 1961. Nothing has changed.