When you’re facing an angry Cape buffalo, lion, or elephant at rock-throwing distance, you’ll want one of these six serious stopper rounds 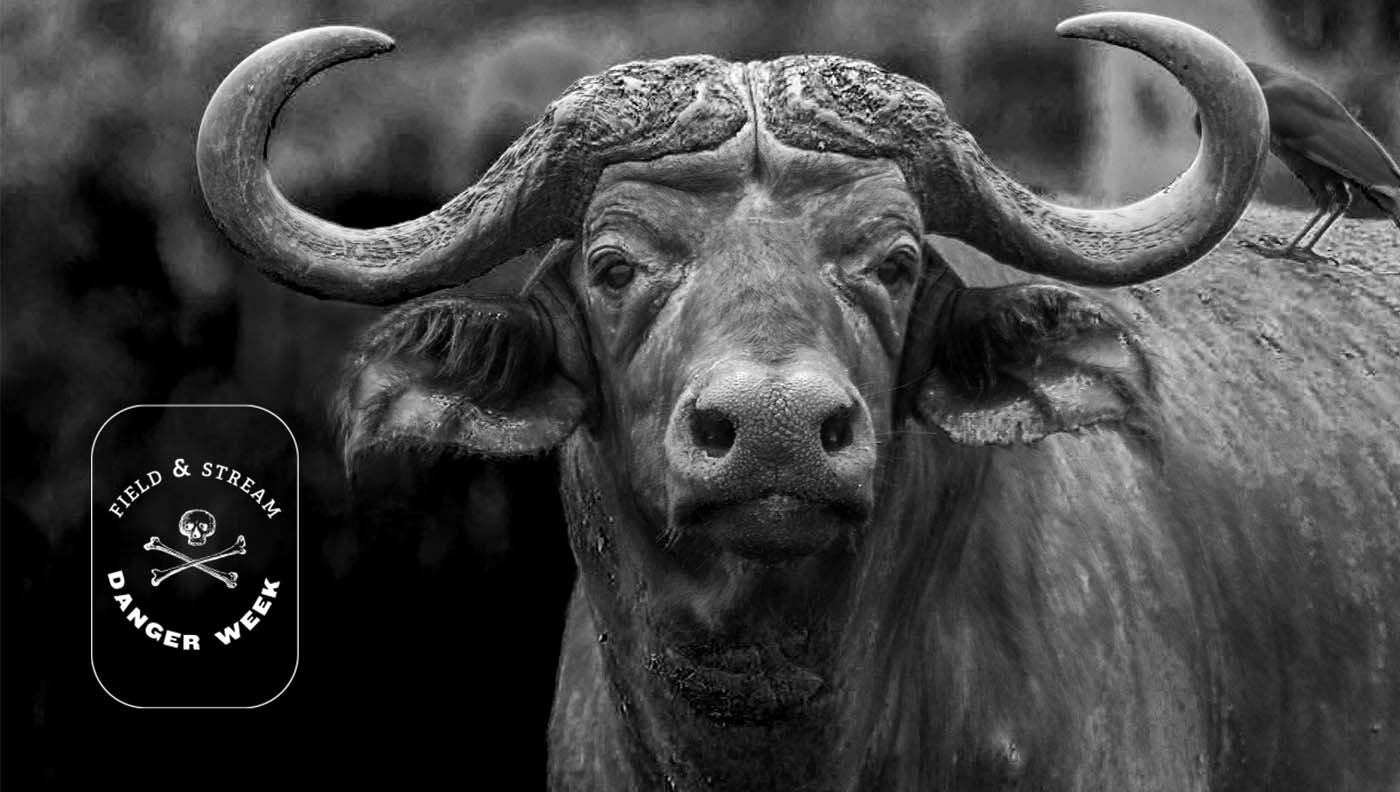 You don't want to show up under-gunned on a Cape buffalo hunt. Charles Nambasi from Pixabay
SHARE

Welcome to Danger Week. To celebrate the launch of our brand-new Danger Issue, all week long we’ll be publishing close calls and cautionary tales of the most dangerous game and the big guns you need to stop them. So swallow that lump in your throat and keep reading.

There’s only a handful of authentically dangerous game out there, which is why rifles and cartridges for same are not sold in every gun store. But these critters deserve to be taken seriously. “The ones that shoot back,” I’ve heard them called, and it’s a valid label. The group includes the big cats, the big bears, Cape buffalo, elephants, and the like. What follows is a short list of cartridges that have proved, over time—sometimes a great deal of time—that they can put an instant end to the careers of vary large, very angry wildlife that is about to do you in.

Before we get into this, be advised that my list is based only partially on my own experience. It draws heavily on the opinions of professional hunters (some of whom have killed thousands of head of dangerous game) and some of my gun-writer colleagues who have gobs of experience. Now let’s get into it.

This ancient round was originally designed for black powder, and in that form, it goes back to the 1860s. Westley Richards redesigned it for cordite in 1890 and scrapped its lead bullets for jacketed slugs. In its current form, the .500 Nitro Express fires a 570-grain bullet at 2,150 fps, and may well be the top dangerous-game cartridge of all. (You could argue that the .460 Weatherby is its equal or superior, but its frightful recoil is a problem for just about everyone. I’ve known only one PH who used it, and he had to replace cracked stocks twice a season.)

The .500 NE is largely the tool of professional hunters because its recoil is grim. In a 10-pound rifle, it delivers 85 foot-pounds of kick. A .458 Winchester, which most people find very difficult to shoot, bequeaths only 60 foot-pounds. The .500 NE is best used in a double rifle that weighs a lot. The Heym Model 89B, which is the best-thought-out double I know of, scales around 13 pounds in this caliber, which is much more like it.

Why a double? Because it gives you two aimed shots quicker than anything else. And as PH Buzz Charlton points out, two shots is all you have time for.

Developed by the British firm of Joseph Lang in 1907, the .470 NE was always a smokeless cartridge and is always chambered in double rifles. Its ballistics—500-grain bullets at 2,150 fps—have proved to be the gold standard for a dangerous-game rifle, and are what Winchester tried to duplicate when they designed the .458. The .470 was an immediate success, and it remains the most popular of the Nitro Express cartridges.

Recoil, in an 11-pound rifle, is about 70 foot-pounds. This is, like the push from the other NE cartridges, a shove rather than a violent blow, albeit a very substantial shove.

Ammo is readily available, but the price is not for the economically challenged. However, when you find yourself facing something big and irate and at a distance where you could easily throw a rock and hit it, the money will not seem so important.

The .458 Winchester, which was supposed to be the ballistic equal of the .470 NE, was not. In order to reduce the cartridge length, the Winchester engineers sacrificed powder capacity and instead of getting the 2,150 fps they wanted, the real-world muzzle velocity with a 500-grain bullet was often around 1,900 fps, which is a lot of horsepower to forfeit.

Enter gun writer Jack Lott who, while hunting Cape buffalo with a .458 in Mozambique in 1959, received a stomping from a bull that was unimpressed with the Winchester round. Lott brooded on this for some time, and then began looking for a cartridge that would keep him out of the hospital. Not finding what he wanted, he designed his own, which was simply a .458 with a longer case and greater powder capacity that gave 200 to 300 fps more than the Winchester round and greatly increased its power.

Introduced in 1970, the .458 Lott propelled 500-grain bullets at an honest 2,300 fps. It was, and is, a very effective cartridge—some say better than the .470 NE—and it is considerably cheaper than the heavy British rounds. It has become popular with professional hunters as a stopping rifle for buffalo and elephant. (It’s too much gun for anything smaller.) The Lott’s one handicap is its 70 foot-pounds of recoil. In 1992 I took a Lott to Zimbabwe and killed my best buffalo with it. The rifle bashed him absolutely flat, which does not happen very often, but it also caused the ring finger and little finger in my left hand to go numb.

When I got home I asked a doctor what I could do about this, and he said, “Sell the rifle.” So I did. The guy who bought it was just as impressed with the Lott as I was.

Despite its initial problems, the .458 quickly became hugely popular in Africa, due largely, I suspect, to the low cost of the Model 70 African rifle and the ammunition for it. The initial stigma of the underpowered ammo never really left the .458, however. I took one to Zambia, and slew a buffalo, and a hippo, and all manner of other game, and had no problems with it whatsoever, but the impression I have is that it’s lost a lot of its popularity to other cartridges.

Notwithstanding, I know a number of professional hunters who have shot prodigious amounts of dangerous game with one, and will look at you strangely if you suggest that there might be something wrong with the .458.

I’ve lumped these together because their ballistics are identical, although the cartridges themselves differ considerably. The .416 Rigby is by far the older of the two, the design of the London gunmaker John Rigby and Company, and appeared in 1911. It was designed for use with Cordite, which was one of the first successful smokeless propellants. (Cordite is stable in disgusting climates, and looks like strands of uncooked spaghetti. It also requires a lengthy case in which to be loaded.) Rigby also built rifles for the round based on the Magnum Mauser action, and these guns were masterpieces—about as reliable as a repeating firearm could be, and far less money than a double. Finally, Rigby got the ammo firm of Kynoch to make good bullets for it. The result was that no rifle/round combination I know of has a better reputation than a .416 Rigby.

(In 1949, a young PH named Harry Selby bought a .416 Rigby in Nairobi after his double rifle was run over by a truck. He would go on to use the gun for 50 years, retiring from the safari business in 2000 at the age of 75. The rifle was a right-handed bolt, and Selby shot it left-handed. Selby became, courtesy of Robert Ruark, the most famous PH of all time, and his Rigby the most celebrated backup rifle.)

The .416 Remington debuted in 1989, and is based on the 8mm Remington magnum cartridge. It’s not nearly so long as the Rigby round, but it delivers the same ballistics—400-grain bullets at 2,400 fps. It packs plenty of punch. I’ve killed a number of Cape buffalo with it, and have taken follow-up shots only as a matter of courtesy; the first slug invariably did the trick. Unlike the preceding rounds, the .416s get the recoil down to something approaching a sane level. A 10-pound rifle delivers 53 foot-pounds of push. You’ll know that you have fired a gun, but the experience will not leave you walking in circles.

This one is a sleeper. It’s an ancient round that was designed by W.J. Jeffery & Co. in 1905 and nearly disappeared over time, but has been rediscovered. It fires a 400-grain bullet at 2,150 fps, giving it plenty of punch, but only 41 foot-pounds of recoil. During its heyday, it was beloved of PHs and game wardens who had to shoot a heavy rifle a lot, but did not fancy getting their brains beaten out.

About a decade ago, the masterful custom-rifle builder D’Darcy Echols arranged for me to borrow a left-hand .404 that he had built, and I was amazed and delighted at how little it kicked, and how quickly I was able to get off aimed repeat shots. If I were going into the dangerous-game business today, and did not already have my .416 Remington, I’d almost certainly get a .404.

The .375 H&H is not on this list. I’ve owned a number of them, and shot a lot of game with them, including four Cape buffalo, but for a dedicated dangerous-game rifle, from what I’ve seen, I don’t think it packs the pork. And I’m not alone in this opinion.

Read Next: Q&A: Westley Richard’s L.D. McCaa on Why Dangerous Game Guns are So Cool