The 5 Most Dangerous Game Animals to Hunt

Any big-game animal can be dangerous, but these five beasts are the most capable and inclined to put a nasty end to your hunting career 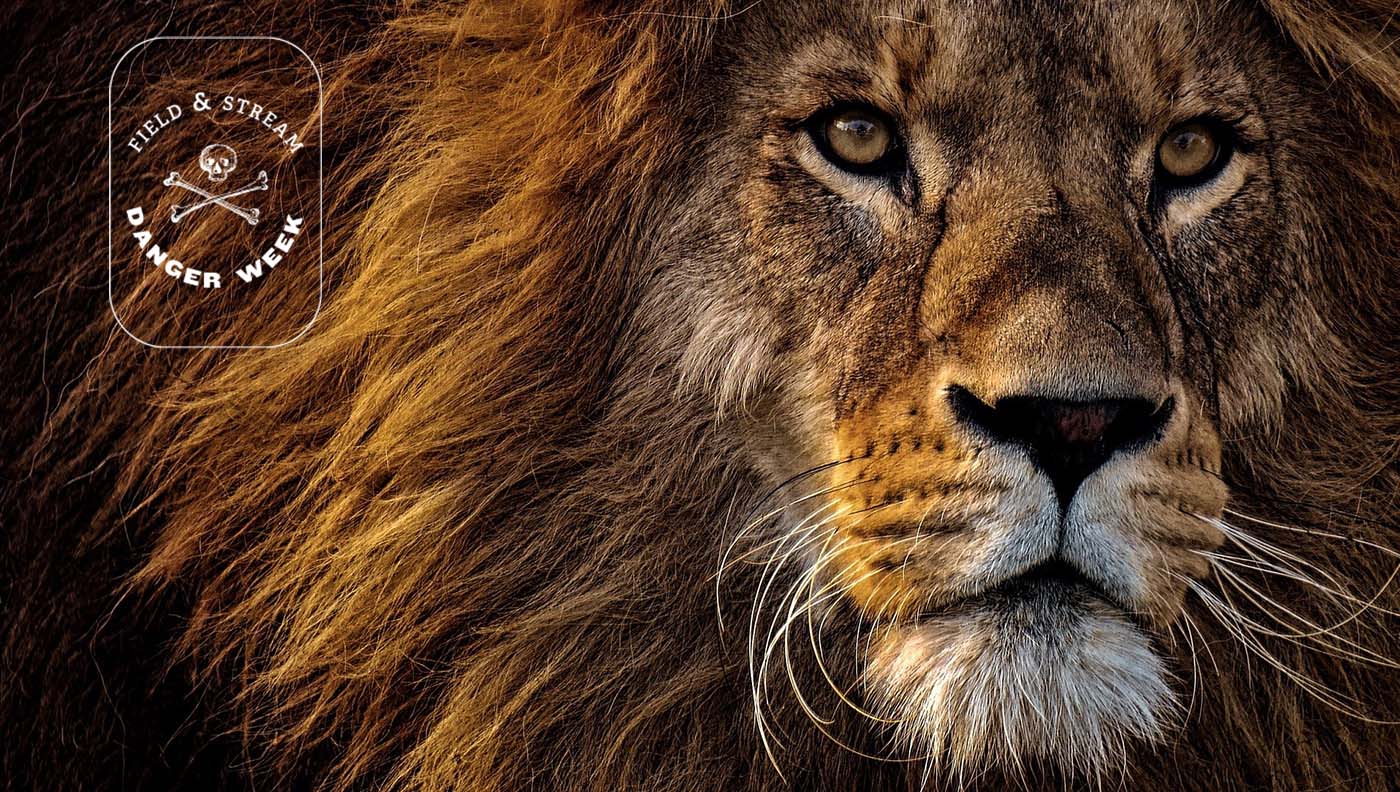 A 450-pound male lion can run 50 miles an hour for a short stretch and leap over 30 feet in a single bound. Here and now, unfortunately, ends my journey on Pixabay from Pixabay
SHARE

Welcome to Danger Week. To celebrate the launch of our brand-new Danger Issue, all week long we’ll be publishing close calls and cautionary tales of the most dangerous game and the big guns you need to stop them. So swallow that lump in your throat and keep reading.

Before we get into this, two things to remember: The first is that any animal can cause you to shuffle off this mortal coil. Years ago I knew a wildlife photographer named Leonard Rue III who took all kinds of insane risks to make his living. I once asked him what the most dangerous beast in North America was. He thought a minute and answered, “The average barnyard bull.”

The second is that big-game hunting can be genuinely risky, but the real danger comes not so much from animals, as from bad luck and ignorance. The wilderness, as someone wrote, is neither malign nor benevolent. It is indifferent. It doesn’t care whether you live or die.

I know of a Texan who took up residence in a remote, radio-less cabin in Alaska. Eventually he used up all the food he had brought with him and was starving to death when a plane flew overhead. Instead of giving the signal for “In trouble; need help now.” he mistakenly signed “I’m OK, no help needed.” So the plane flew on, and he died.

This is called the “cascade of errors,” and far more people perish from it than from claws and fangs. Nonetheless, it’s a mistake to think that our four-legged friends are not dangerous. Some of them can be very bad for your health indeed.

Here are the five species which I believe are most ready, willing, and able to put out your lights.

Read Next: What Is the Deadliest Snake in the World?

Elephants are lethal because of their extraordinary senses, near-human-level intelligence, and their ability to inflict enormous damage in a matter of seconds. They can also move noiselessly. I’ve seen elephants melt into the bundu without so much as a twig cracking. How something that weighs 6 tons can do this I have no idea, but it is a fact. A PH with whom I hunted was killed by a cow elephant that walked up behind him and did him in. He never had a chance to raise his rifle.

Cow elephants with calves are in a category all by themselves. They assume, correctly, that everything with teeth wants to eat their offspring, and they deal with the world accordingly.

Bear in mind also that if an enraged elephant gets hold of you, it will not quit until you’re dead. If you show a sign of life, they’ll put it out before they consider their work done.

Read Next: F&S Classics: The Elephants of Chirisa

Robert Ruark, who wrote that Cape buffalo look at you like you owe them money, got it wrong. Buffalo look at you like they wish you would go away and leave them alone, because they get more than enough grief from lions. He also referred to old nyati as a “vast, scabby, tick-covered destruction,” which is vivid writing, but only partly accurate.

Buffalo are indeed scabby, and tick-covered, (and plastered in shit, which Ruark couldn’t mention in the 1950s), and capable of great destruction, but vast they ain’t.

What is not myth is their resistance to bullets and their belief in Payback. If you use a big enough rifle, and shoot accurately, the average buffalo will go down quickly and not create any drama. However, every once in a while you’ll encounter one that absorbs an incredible amount of damage and not only decides not to die right away, but to take you with it when it does give up.

Like elephants, buffalo have a number of ways to kill you, and won’t stop until you’re not just defunct, but obliterated.

Both brown and grizzly bears are apex predators that range from 600 pounds (grizzlies) to twice that or more (brown bears). Both have mediocre eyesight, excellent hearing, and a sense of smell that is 100 times more acute than a dog’s. Both are bad-tempered, highly territorial, and, over a short distance, can run down a horse. Despite this, I suspect that the number of people killed by the big bears while hunting them is quite small. I know, personally, of only two attacks, and in both cases the humans involved stood their ground and shot, and that was that.

The people who end up as bear poop are mostly hikers and the like who are unarmed and unaware that a bruin is around until it’s too late.

You can’t separate big bears from the country in which they live, which is inherently dangerous. Since the state began keeping track in 1988, 60,700 Alaskans have been reported missing. Some of them have been found, or turned up, but others have died of exposure, or misadventure, or bears. In all likelihood, the figures are similar for any of the true Far Northern wildernesses that these animals inhabit.

As with mama elephants, a bear sow with cubs is in a separate category as far as danger goes. They are proactive, and you want to give them a very wide berth.

Read Next: The 7 Best Brown Bear and Grizzly Cartridges

So far, I’ve written about creatures that kill people in combat. Lions do this, but they occasionally make people their diet. This is because lions are lazy, and people are easy pickings.

Back when there were lots of lions and lots of people hunting them, the big cats did bag the occasional nimrod, but I can’t recall a single hunting related fatality in modern times. Lions are not the juggernauts that buffalo are, and if you hit them right you’ll stop them.

Lions, like leopards, are most dangerous because of their speed. A 450-pound male lion can run 50 miles an hour for a short stretch and leap over 30 feet in a single bound. If you provoke one into a charge, he’ll be chewing on you before you can say “Mommy!”

People-eating lions operate at night. They’ll stroll into a hut, pick out a sleeping human, bite him or her on the skull, drag the body off into the brush, and dine at leisure, pausing only to swat at encroaching hyenas.

Long ago, I stayed in a temporary camp in Botswana, near a place called Phuduhudu. The Bakwena tribespeople there lived in huts made of plate iron. Since the air temperature in summer went way over 100 degrees, the huts must have been like ovens. Iron plate, it turns out, was the only thing that would absolutely, positively, keep the lions out at night.

I’m embarrassed to put the hippo on this list, but I guess I have to, since the creatures kill between 500 and 3,000 people a year. They are huge, aggressive, territorial, and equipped with an enormous mouth filled with big, snaggly, very sharp, teeth. Most people are killed by hippos because the dugout in which they’re paddling looks like a crocodile from below, and hippos like nothing better than biting crocs in half. So they chomp the dugout in two.

As for hunting hippos, there’s not much danger to it. You walk the riverbank until you find a sleeping bull. Aim right under the ear. Pull the trigger. It’s rather like what an old-school PH answered when I asked him what it was like to hunt rhino. “You go to a waterhole and find a track,” he said, “then you follow the track until you see the rhino. Then you shoot it.”