What Is the Deadliest Snake in the World?

Even top herpetologists can't name the deadliest snake, because it depends on how you define the terms. But here are the six serpents you least want to tangle with 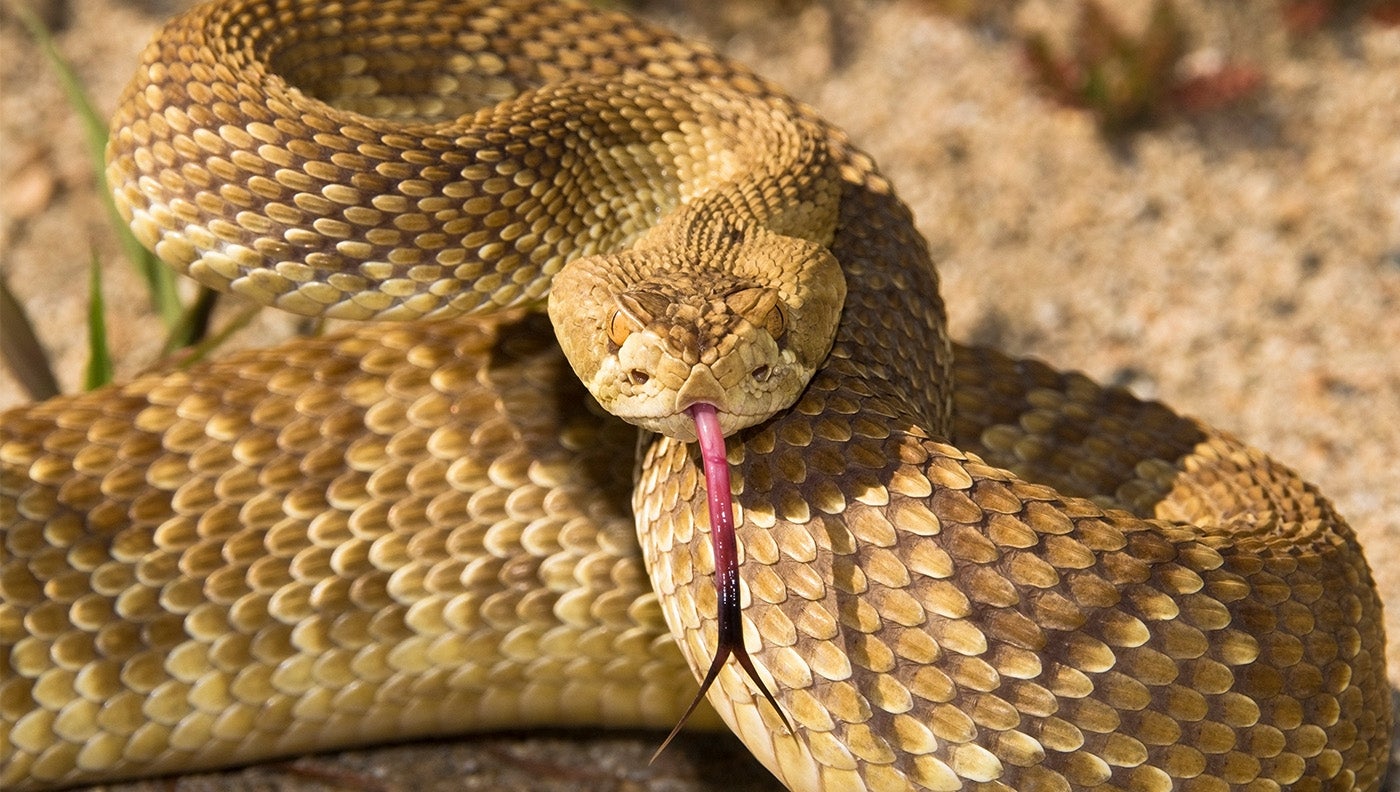 Once upon a time, the naturalist and television personality Roger Caras wrote a book called Dangerous to Man: Wild Animals; a Definitive Study of their Reputed Dangers to Man. Caras took a painstaking, scholarly look at all the critters that can kill us, and his is a book without bullsh*t. Snakes got five chapters, since they kill more people than any other form of wildlife. Roughly 5.5 million snakebites are recorded annually. Of the 3,500 species of snakes, roughly 600 are venomous.

In the course of his research, Caras asked a nest of herpetologists to name the six most lethal venomous snakes, and what he got in reply was chaos. This is because there are 15 factors that determine the outcome of a snakebite, and once you multiply 15 by the number of lethal reptiles, and by variations within species (for example, some rattlesnakes have venom that is 60 times more potent than that of other rattlers), you’re left with an impossible number of choices.

Read Next: The Largest Snakes in the World

So he put the question again, differently: “Which snakes would you least like to be locked in a phone booth with?” Even then, there was only one species that was a unanimous choice (and we will get to it), but the concept is an intriguing one, and since I find snakes interesting (although I detest them), I thought I’d have a shot at it. Below are my picks for the six deadliest snakes in the world, according to the phone-booth test.

6 of the Deadliest Snake Species in the World

This was the one unanimous choice for the deadliest snake in the world, according to the phone-booth test. The King is our largest venomous snake—it can grow to 18 feet—and makes its living by killing other snakes and eating them. So, it’s one of Nature’s mysteries why this creature packs such an enormous dose of venom. It’s a neurotoxin whose potency is only so-so, but there is two tenths of a fluid ounce available, which is enough to kill 20 people or one elephant. If the King decides to give you the whole load of venom, your chance of survival is slim.

King Cobras are non-aggressive, intelligent (as snakes go), and endangered, and if you kill one in India you are looking at six years in jail and a serious fine. For myself, any snake that kills other snakes gets a pass.

How dangerous is the black mamba? In 1992, I hunted near Victoria Falls in Zimbabwe, and we gave one particular area a wide berth because it was home to a particularly aggressive black mamba that lived in a deserted termite mound and had been known to chase safari cars that came too close. No one wanted to get mixed up with this creature. I have not seen the same kind of respect accorded to Cape buffalo or lions.

3) Most Painful Biter: The Gaboon Viper

Now, here is a paradox. Temperamentally, the Gaboon viper is at the opposite end of the spectrum from the black mamba. It is placid, non-aggressive, and generally very hard to provoke into a strike. This viper is a heavy-bodied (up to 25 pounds) snake that is brilliantly colored, yet extremely hard to see in its natural background. In an African serpentarium, I looked for the gaboon viper lying on a bed of dead leaves in a small cage, and could not see it until it twitched, and I was standing a foot from the cage.

Read Next: How to Buy Snake Boots

Mild manners aside, if a Gaboon viper bites, God help you. Its massive head contains the longest fangs of any venomous snake (2 inches), and it produces more venom than any serpent except the King Cobra. The venom is a cytotoxin (cell-destroying) that produces massive tissue damage, and what is reported to be the most agonizing of any snakebite. When the Gaboon viper strikes, it hangs on, injecting venom for all its worth.

This snake is rather like the toughest kid in high school. It can afford to be good natured, because no one wants to mess with it.

4) The Deadliest Snake in North America: The Mojave Rattlesnake

We have to get one in here from the good ol’ US of A, and the slot usually goes to the Eastern Diamondback, which is not only the biggest rattlesnake, but one of the biggest venomous snakes in the world. However, its venom is a so-so hemotoxin, and while there’s a lot of it, and it gets delivered via long fangs, the North American vacancy must go to its much smaller, bad-tempered cousin, the Mojave rattler.

Not recognized as a species until comparatively recently, this beast packs a venom that is truly world-class. Some rank it with that of Australia’s very horrid tiger snake. Not only is it exceedingly potent, but it comes in different varieties. Depending on where a Mojave lives, its venom can be mainly neurotoxic with overtones of hemotoxin, or vice-versa, or a more or less equal mix of the two.

This is offensive to geneticists, who point out that Mojave subspecies have been interbreeding for some time, and that if they followed the rules of Nature, they would all have the same venom by now, but such is not the case. In any event, if you run afoul of a Mojave, you’ll have other things on your mind.

5) Snake with the Most Lethal Venom: The Inland Taipan

The Inland Taipan (as opposed to the coastal taipan) is a placid, non-confrontational reptile whose venom is the most lethal in the world. It is a neurotoxin with traces of hemotoxin, and one bite is enough to kill 100 men or 250,000 mice, although what you would do with a quarter million dead mice escapes me. If you are struck by an inland taipan, you can go from bitten to dead in 30 minutes.

The Inland taipan grows to 6 feet or so, and it changes color with the seasons: brown in winter and olive in summer. Because it lives in the yowling wastes of central Australia and does not seek trouble, inland-taipan bites are rare. However, the snake is very fast, strikes like lightning and with great accuracy, gives multiple bites, and does not give dry bites.

Unless you can get to antivenon very quickly, you don’t have much chance of surviving an inland taipan envenomation. As a PH once put it when discussing black mamba bites, “Find a shady tree, have a seat, smoke your pipe, think about Mother, and wait for the end.”

6) The Deadliest Snake in the World by Range: The Saw-Scaled Viper

The saw-scaled viper is the smallest of this hellish crew, growing to a yard at the longest. Small size notwithstanding, it is lethal. An inhabitant of India, the dry parts of Africa, and the Middle East, the saw-scaled viper kills more people within its range than all other venomous snakes combined.

Its name is derived from specialized scales that the snake rubs together when giving warning. Their rasping sound is something akin to a rattlesnake’s rattle. However, because it’s mostly nocturnal, you may hear it but you won’t know where the creature is until it’s too late.

Saw-scaled vipers are distinguished by their extremely bad tempers and by their highly complex and lethal venom. It’s a brew of hemotoxins, neurotoxins, cytotoxins, and cardiotoxins, which attack the heart. Not only is it a complex venom, but it varies greatly from region to region, and one type of antivenin does not fit all. So, getting to the hospital and getting antivenin may do you no good at all, or it may actually increase the lethality of what the snake gave you. And even if it stops the hemorrhaging it will not prevent the massive tissue destruction that follows.

Final Thoughts on the Deadliest Snake in the World

That’s my phone-booth list on the deadliest snake species. It occurs to me as I write this that if I were compiling it 10 years from now, very few people would know what a phone booth is.

And, since I am a gun writer by trade, it’s more or less natural for me to go into the question of snake shooting. Part of the Code of the West dictated that you kill every snake you see, because if you got it, it couldn’t get you. Now, however, this is actually illegal in some places.

Like gun laws, the rules protecting snakes vary wildly from place to place and species to species. In some areas, it’s illegal to “disturb” an Eastern Diamondback. The law does not state was “disturb” means. In some cases, depending on your anti-snake transgressions, you can be put in jail, or fined $25,000, or the carp cops will simply beat you to death on the spot.

Look at this this way: We’re well into the Sixth Great Extinction, and probably a lot of the creatures that will not be with us in the 22nd century are serpents. Leave them alone. Nature will take care of them for you.