Rounds you can trust when hunting North America’s largest predators 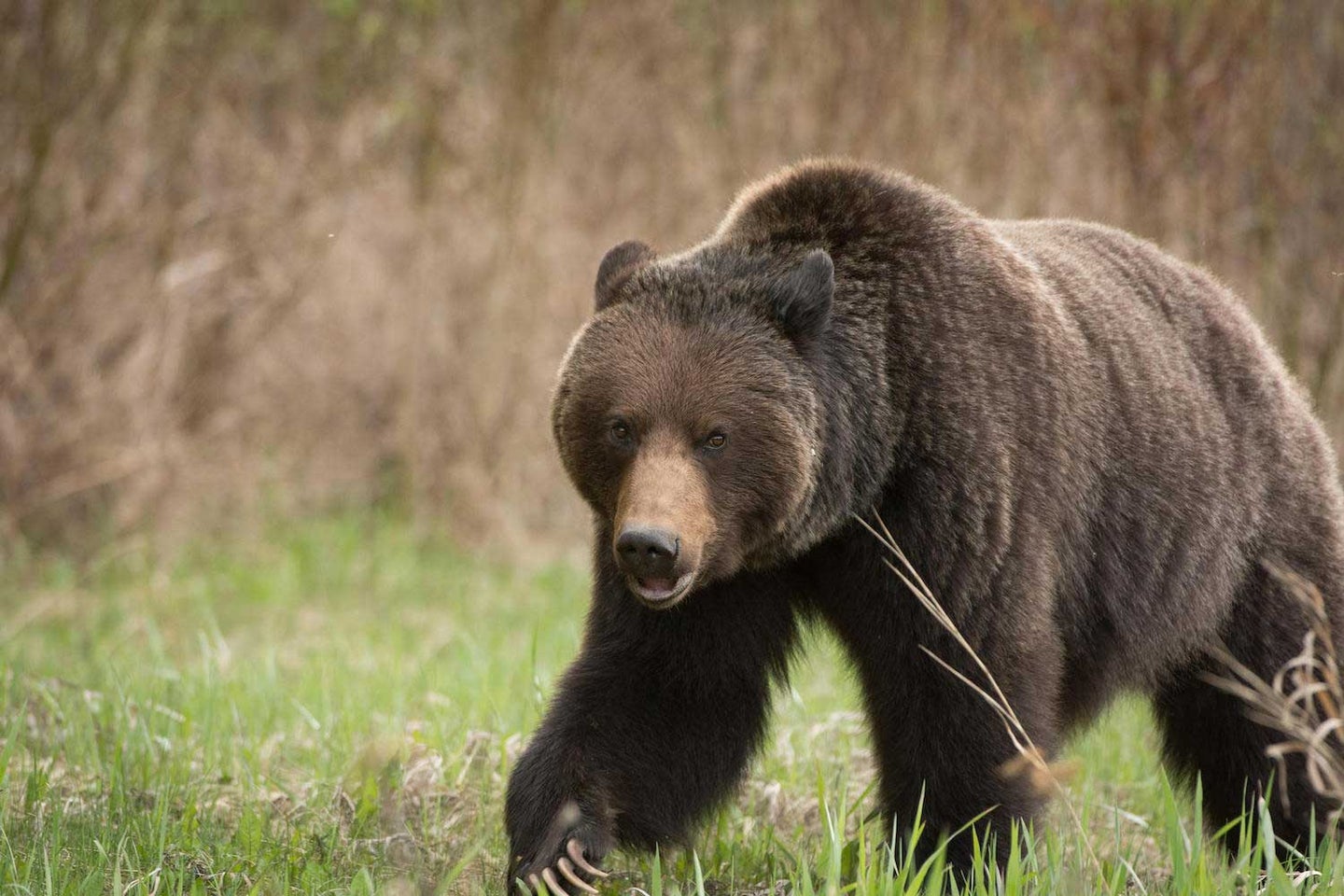 Brown bears and grizzlies, although closely related, are distinctly different animals. Grizzlies are widely distributed, and have the decency to live in mostly open country, including mountains. Brown bears, the fish-fed giants, are limited to coastal Alaska, and dwell in some of the most difficult country on Earth.

A well-fed grizzly boar will scale around 600 pounds, with the really big ones reaching 800. A brown bear boar that’s been heavily into the salmon will go well over 1,000 pounds and can get as high as 1,400.

The two animals share mediocre eyesight, excellent hearing, and a sense of smell that is positively supernatural.

(How good is their sense of smell? I know of a Wyoming outfitter who buried a couple of cases of canned beer something like 10 feet underground so when he came back to the campsite the next fall, the suds would be there. Grizzlies smelled it, dug it up, bit the cans open, and had a party.)

Both animals are thick-hided, heavily muscled, and prodigiously strong. Both are quick in the same way cats are quick. Forget the fat, tame grizzlies you see lumbering around in movies. Both bears are highly territorial, peaceable enough if unprovoked, but quick to take offense at all manner of things. Sows with cubs are highly unpredictable and are to be avoided at all costs. Grizzlies have been taken with a .270—but this is not a good idea. You’re going to need something with more horsepower. Warren Page did more bear hunting than anyone I know, and had a dedicated bear rifle. It was chambered for a cartridge called the .35 Mashburn Super Magnum, and fired a 250-grain bullet at 2700 fps. That is a pretty good benchmark.

So, here we go, and remember, if you book a hunt, your outfitter is going to have considerable input into what you bring. Ultimately, it’s his ass on the line, not yours.

This is for grizzlies, not brown bears. You’re probably a lot better off with an ’06 that doesn’t cause you to wet yourself than with a .495 Thunderf**ker that does. Federal loads its ’06 ammo with 200-grain Trophy Bonded bullets, which is what you want if you don’t handload. If you handload, get 200-grain Swift A-Frames.

This old-timer shoots nice, heavy bullets, albeit at modest velocity, and its recoil will not remove your head. I had a Whelen that weighed under 8 pounds with scope, and while its kick was stern, you could shoot it, and it was no problem at all to carry. Do not assume that because it’s a medium caliber that it’s loaded with strong bullets. Nosler loads its ammo with 250-grain Partitions. Get that.

One of the most useful cartridges ever developed by the hand of man, the .338 will do it all. When I hunted caribou in grizzly country, I’d use 210-grain bullets for ungulates, and always have a couple of 250-grain Swift A-Frames at the bottom of the magazine in case a bear showed up to claim the caribou. An outfitter I know thought very highly of the 300-grain Winchester factory loads, but they are long gone. If you want factory ammo, get Swift, loaded with its 250-grain A-Frames. If you handload, go for 250-grain or 275-grain Swift A-Frames.

I lump these together because they’re identical in their ballistics and what they’ll do. Both of them fire 250-grain bullets at a real-world velocity of 2,850 fps. Both of them will bash just about anything absolutely flat. Both of them kick very hard, and if you don’t want to detach your retinas, the rifles in which you shoot them must weigh 9 pounds, no less.

Both cartridges are devastating. In 2000, a friend of mine shot a brown bear that squared 11 feet plus, and must have weighed over 1,200 pounds. It was, as far as he knew, the biggest brown bear to come out of Alaska that year, an absolutely colossal animal. It took one shot from a .340 Weatherby and that was that.

Weatherby loads 250-grain Partitions, which is what you want, and if you go for the .338 RUM, you want Nosler ammo with the 250-grain Partition. If you handload, or know someone who does, the two rounds can accommodate the 275-grain Swift A-Frame bullet, which puts them, for all practical purposes, on the same footing as the .375 H&H. There’s nothing that can stand up to it.

From what I’ve seen, there are more Alaska bear guides carrying .375s than anything else. The ammo comes loaded with bullets ranging from 260 grains, which is suitable for ground squirrels, to 300 grains, which is the only weight I would consider. The .375, because of its considerable case taper and gentle shoulder angle, can be made to feed like greased asparagus in a properly set up rifle. This can be of considerable importance. If you want factory ammo, try the Federal loaded with 300-grain Trophy Bonded bullets. For handloaders, the 300-grain Swift A-Frame is the way to go.

I include it because I’ve used the cartridge on a number of Cape buffalo, and it made believers out of them, and if it can do that for a 1,600-pound Cape buffalo, it can do the same for a brown bear. A strong 400-grain bullet at 2,400 fps is highly persuasive. The disadvantages are that the recoil is not for the faint of heart, and you need a rifle that weighs 10 pounds. Nosler and Swift load the cartridge with Partitions and A-Frames, respectively, and Federal with Trophy Bonded slugs. Any of them will do fine.

Other Considerations for Hunting Grizzlies

The above is, I realize, a short list, and that is not an accident. We’re talking about a very specialized type of hunting. In addition to cartridges, here are some other considerations:

Do not, I pray you, single-load your bear rifle when you sight it in and practice with it. (You are going to practice with it, aren’t you?) A great many bolt-action rifles do not feed worth a barrel of Old Hog Sh*t, and you want to find out in advance if yours is among them. Fill the magazine and see if it cycles.

Similarly, make sure your floorplate doesn’t pop open, since heavy recoil causes bolt-actions to flex through the action. A friend of mine shot a grizzly that was uphill from him, which was a mistake because bears frequently roll, and when it came to a stop only a few yards away and Jack pulled the trigger a second time, he got the click of an empty chamber because his other three rounds were in the tall grass at his feet. He remembered thinking, “Emma [his wife] is going to miss me.” But the bear died before things got any worse. At the minimum, tape your floorplate shut, or have a gunsmith pin it shut.

Keep your reloads where you can get at them. Ursine disputes are not always settled in three shots. You don’t want to discover that your ammo is buried beneath four layers of clothes and your chest waders.

Never, ever, shoot a large-caliber bear just once. This should be a standard practice with any dangerous game. Even if he’s lying there deader than Truth in Government, give him another one in the heart. The taxidermist can patch the holes in the hide. The doctor may not be able to patch the holes in you if he gets up and decides to get even.

Never, ever, walk up on a downed bear with an empty rifle. Reload. Be ready. Approach it from an angle where it can’t see you.

Forget about long shots. If you want to try a 300-yarder at one of these animals, your guide will offer to take you to the airfield and refund your money.

Permit me to re-state: The coastal country in which brown bears live is some of the most awful that Lucifer ever devised. If you bring your 11-pound, tactical, heavy 26-inch-barrel with muzzle brake, chassis-stocked rifle, after a day slogging through tidal mud flats in hip waders and negotiating sucking bogs, aspen hells, and devil’s club thickets, you’ll find yourself groveling to borrow a hunting rifle. Warren Page’s .35 Mashburn had a 20-inch Mannlicher-stocked barrel and weighed 8 pounds, 2 ounces. You could carry it all day.