Lt. English on the pressures of competing in the Olympics and why she chose shotgunning over rifle shooting 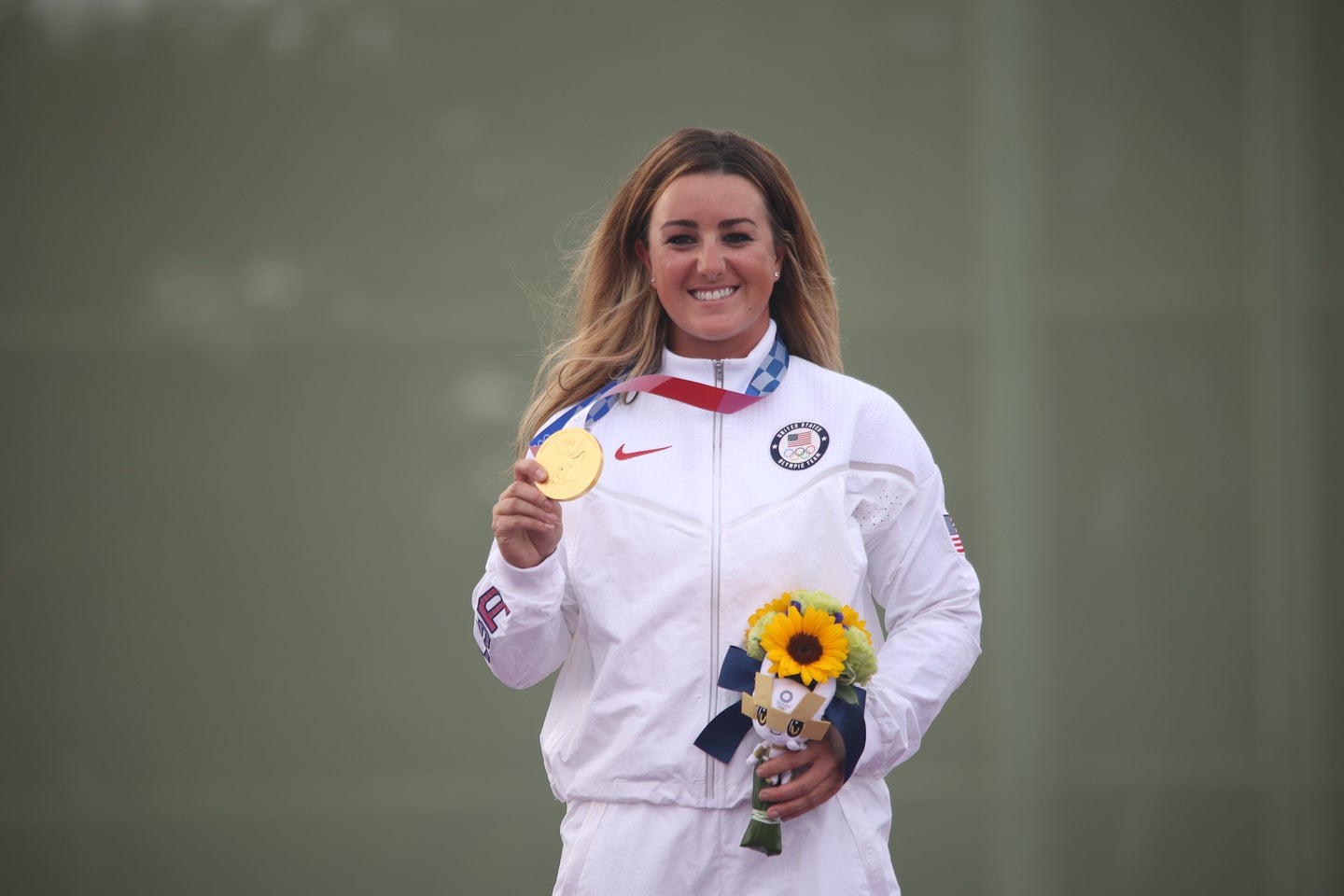 Lt. Amber English became the second American woman ever to win gold in Olympic skeet in July. Competing in her first Olympic games, English won a tense match that came down to the last few shots.

I was able to catch up with Lt. English, 31, now back at Fort Benning, Georgia, and learn about her and her Olympic journey. Since most of us only follow international skeet once every four years, English is a new face in an event dominated by Kim Rhode since 2008.

When did you start shooting?

I learned to shoot when I was 6. I come from a family of hunters and competitive shooters. My father and uncle were running target shooters on the U.S. team. My mother and aunt shot on the University of Kentucky rifle team. I grew up around hunting and shooting.

Living in Colorado, I hunted elk, deer, and antelope. My parents would take me out of school on the opening day of dove season, and we hunted pheasant, too. My birthday falls during mule deer season, so even when I was very young my dad would take me with him on my birthday. I think the ranchers that let him hunt thought he’d be harmless with this little girl in tow. He shot some very big mule deer with me. As long as I had my snowsuit and a bunch of Kit Kats I was fine.

Coming from a family of rifle shooters, why did you choose skeet?

I actually competed in gymnastics when I was younger. Toward the end of high school, I got tired of being sore all the time, and I wanted to find a sport I could compete in through college that didn’t hurt. Growing up around competitive shooters, I thought I’d try shooting. Rifle and pistol were boring, and the competitions were indoors. I like being outside, so I tried to trap and skeet. I fell in love with skeet.

Why did you join the Army?

I had been a resident athlete at the Olympic Training Center in Colorado Springs starting in 2013. In 2016 I finished third in the Olympic trials, good enough to be an alternate but not to compete in Rio. I had lost my father suddenly earlier that year, and I felt I had done the best I could in trying circumstances. I had to do some self-reflection and think about whether I wanted to devote four more years to my goal. I decided I had unfinished business and I needed to elevate my game. That’s when I joined the Army. After Officer Candidate School I was assigned to the Army Marksmanship Unit at Fort Benning. It was a great decision. The Army has so many resources to help us train. I’ve made lifelong friends in the Army, too.

How did Covid affect your training?

Covid made training challenging. There were no international matches where we could test our preparation. To make up for it and to build our confidence, we shot matches among ourselves at Fort Benning. We’d treat them like real matches, and to increase the pressure, we’d put something on it. If you lost, you might have to cook breakfast for the whole unit.

What is it like to shoot in the Olympics? How do you handle the pressure?

I trusted my preparation. I knew I had put so much time and effort into my training that there was nothing more I could do. I tried to be at peace and accept that whatever happened would happen.

Still, when you see those Olympic rings, you realize you’re at the very top. I was shaking at first. I made myself pretend I was back at Fort Benning, doing something I had done 100 times before. Between the first and second days of the competition, I didn’t really sleep. I got as much rest as I could and watched a lot of Netflix. I told myself I could sleep when it was over.

Read Next: How to Shoot Trap, Skeet, and Sporting Clays

What did you think about during the final?

I try to keep my thoughts on the job at hand. It’s hard to do. When my mind would start heading down some rabbit hole, I would make myself think about what I had to do to break the next target. You have to stay in the present and shoot one target at a time.

At the end of the final only [2016 gold medalist] Diana Bacosi and I were left. The Italians are our biggest rivals, and with ten targets to go I said to myself I am not listening to the Italian national anthem. I am going to do whatever it takes to break the next target.

What’s next for you?

We’re still in competition season so I’m focused on that, but sometimes I think about what I want to be when I grow up. I’m going off active duty in September and into the reserves. Before the Army, I worked as a paramedic in Colorado, and my college degree is in health science. I think about a career in medical device sales. But, I haven’t ruled out 2024.