With the addition of a threaded muzzle, this iconic pocket pistol is now suppressor ready and even more versatile. 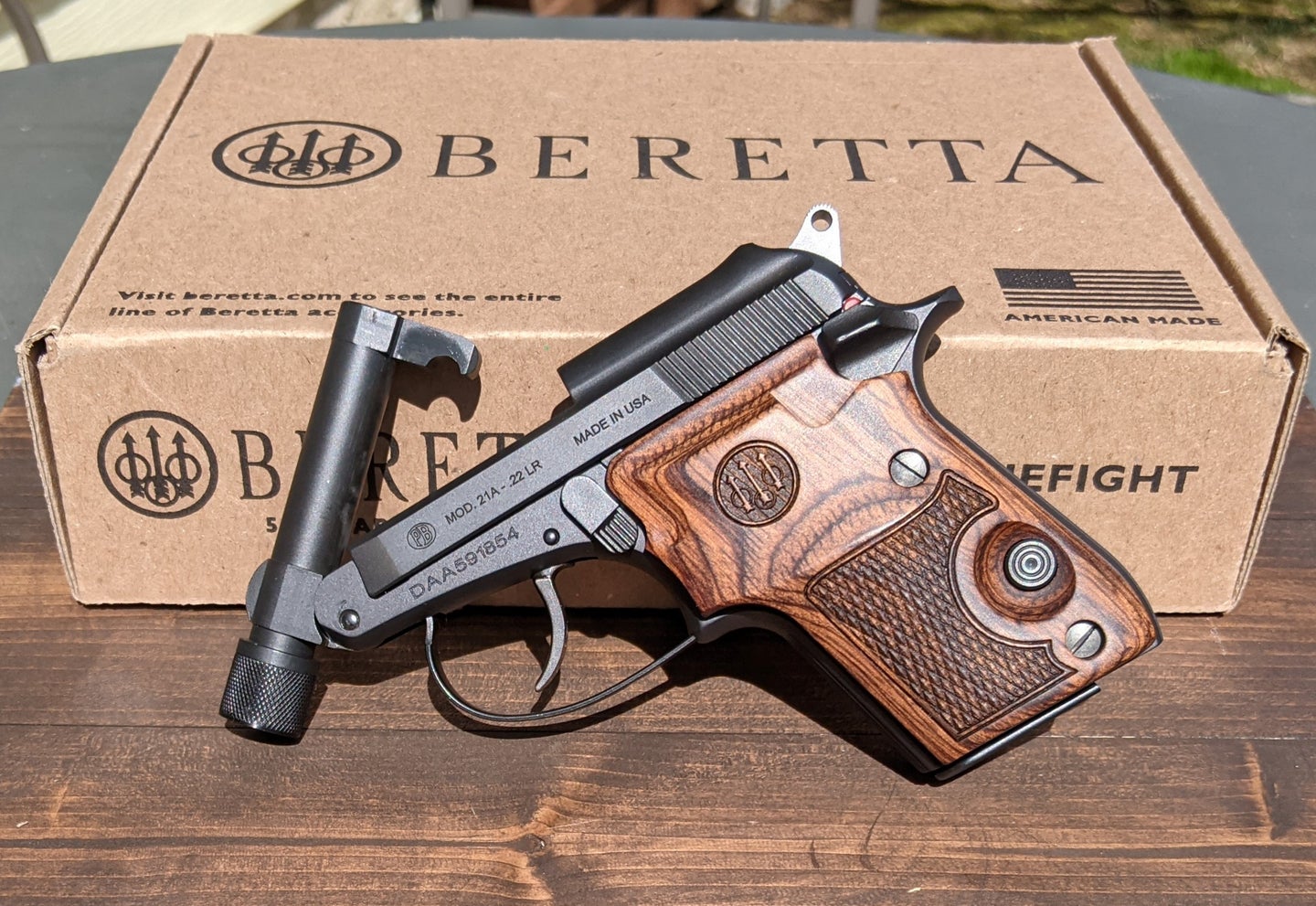 The Beretta 21A covert has a tip-up barrel that is threaded at the muzzle and is chambered in .22 LR. T. Logan Metesh
SHARE

Tomcats, bobcats, cougars, and cheetahs. The Beretta lineup of handguns has had an interesting array of feline firearms over the years. One that has stood out among arms enthusiasts is the Beretta 21A Bobcat, which was first introduced in late 1984. Chambered in .22LR, it is the quintessential definition of a pocket pistol coming in at less than 4 inches long, just 1 inch wide, less than 4 inches tall, and weighing less than 12 ounces unloaded.

If you’ve ever shot one or know someone who has shot one, there’s a common thought that often pops into mind: Man, this would be a sweet suppressor host if only the barrel were threaded!

Enough people had the same thought about the Bobcat that Beretta finally took note and came up with the new 21A Bobcat Covert, which is the same basic gun as before, but with a factory threaded barrel featuring standard 1/2×28 threads.

All of the gun’s dimensions are the same as before with the exception of the barrel. Obviously, adding threads makes the barrel a bit longer (2.9 inches overall), but the gun as a whole still comes in at less than 5.5 inches long. Essentially, there are people out there carrying around cell phones that are bigger (and for some, probably heavier) than the 21A Covert pistol.

Maintaining the same tip-up barrel design as before, the 21A Covert holds seven rounds in the magazine with an eighth round loaded directly into the barrel. Wearing a blued finish, the gun is attractively finished off with a set of walnut grips that have the Beretta logo carved into them. There’s also an all-FDE version that has a Cerakote finish and polymer grips, but to me personally, the blue-and-walnut combo says “covert” better than FDE. Your mileage may vary.

Of course, the whole point of picking up the Covert model of the 21A is so that you can shoot it suppressed, which is exactly what I went to the range to do.

The rimfire suppressor I ran on it was a Banish 22 that weighs just 4.1 ounces, so it was hardly even noticeable on the gun. The funniest part to me, though, is that even though my suppressor is short, coming in at just 5.42 inches in length, it’s actually .05 inches longer than the gun, which is just 5.37 inches overall.

To say that this gun is a ton of fun to shoot would be an understatement. Shooting it suppressed takes it to a whole new level of fun.

Because of the size of this gun, your pinky finger will hang off the bottom of the frame. There’s really no way around it. However, the gun’s grips have a slight swell on each side and you still feel like you’ve got a great grip on the Covert despite your pinky’s lack of a home.

Designed as a SA/DA pistol, the single action trigger pull comes in between four and five pounds, while the double action trigger pull is around eight or nine pounds. It’s not great, but is right in line with what you’d expect from a stock SA/DA gun. There’s also a frame-mounted safety that can be applied whether the hammer is cocked or not.

One thing to note, though, is that the slide does not lock back when the magazine is empty. That’s not a big deal; just something to be aware of and know that it’s considered a feature and not a flaw.

There’s a ton of good stuff I can say about this gun, but I’d be remiss if I didn’t address the couple issues I have with it.

First up are the sights. To say they’re tiny doesn’t even begin to describe them. On a gun of this size, however, normal sized sights are out of the question, but even so these sights could be more pronounced. If you’re running a suppressor, though, the sights are worthless as the can obscures their sight picture entirely. This isn’t a combo that lends itself to precision shooting.

Next up is the magazine release. Instead of being located directly behind the trigger guard like you see on most pistols, the 21A Covert’s mag release is located near the lower corner of the frame. Because of this location, it’s not the easiest gun on which to drop the mag while maintaining a shooting grip, and also because of the location, it’s actually slightly recessed into the grip panel to keep you from accidentally releasing the mag while gripping the gun. It’s a bit cumbersome and inconvenient.

Finally, let’s talk about the magazine. There’s nothing to critique here except that I said magazine singular and not magazines plural. In this day and age, there’s no reason for a gun company to ship pistols with fewer than two mags. Nothing puts a damper on your shooting like having to stop every seven rounds and reload a mag because you’ve only got one. Extra mags run about $20, assuming you can even find one in stock.

Alright, enough of my complaining, and really, the complaints are minimal at best. The Beretta 21A Covert is a solid little pocket pistol. It’s an absolute blast to shoot, and because of its small size and ability to be suppressed, would make it a great option for introducing kids and new shooters to the hobby. It’s also a great option for any other kind of shooter who just wants another cool gun to plink with at the range.

Read Next: Six Dream Shotguns You Can Actually Afford

To sum it all up: I challenge you to run a mag through the Beretta 21A Bobcat Covert, suppressed or unsuppressed, and not finish up with a smile on your face.