If you're looking for a reliable duck gun that'll shoot—and shoot and shoot—and also won't break the bank, the A300 might be the one for you 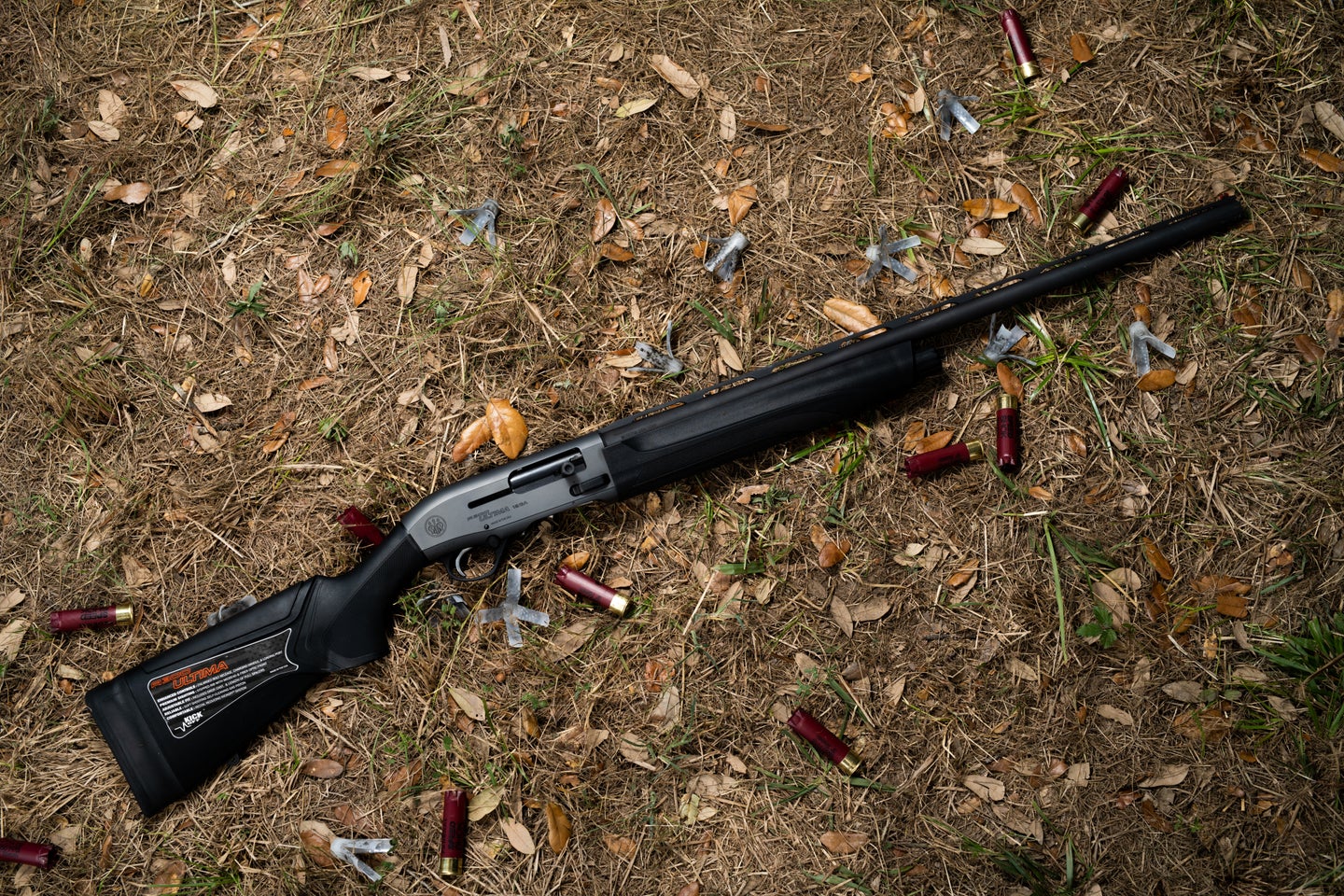 We tested the A300 last fall in Texas. Stephen Maturen
SHARE

Go to any serious sporting clays competition—Nationals, for example—and chances are that every semiauto you see will be a Beretta. Beretta semiautos dominate sporting clays for the same reason they are popular among South American dove shooters. They are reliable and rugged and will run for countless rounds between cleanings. It’s no surprise that Berettas are popular with duck hunters well.

Starting with the A300 in 1968, Berettas has built a reputation over more than 50 years as a maker gas guns. Beretta semiautos are so good that when Browning struggled to introduce a gas gun of its own in the 1980s, it contracted with Beretta to build the B-80, which was nothing more than 302 with a humpbacked receiver and a Buckmark logo on the trigger guard. If Beretta semiautos are good enough for Browning to put their name on, they are good enough for me. Given the popularity of Beretta guns among waterfowlers, it’s no surprise that the very successful A400 Xtreme won our duck gun test.

However, as Beretta’s flagship gun and loaded with features, the A400 Xtreme sells for $2,000, putting it out of the price range of many hunters. To meet the needs of the mid-range market, Beretta has come up with the strategy of introducing lower-priced, U.S.-made versions of discontinued models. The first was the 3901, a terrific gun based on the 390. Now Beretta offers the A300 Outlander, which is basically a 391 listing for well under $1000, as well as an A350, a lower-priced version of the 3 ½-inch Xtrema.

The latest in the line is the A300 Ultima, a version of the A300 enhanced with some of the features waterfowlers want these days. I was already a big fan of the 3901 and the A300 Outlander—guns I recommend to people looking for a first shotgun—so I was very excited that we included the A300 Ultima in our waterfowl gun test at the Pintail Hunting Club.

The Nuts and Bolts of the Beretta A300

Specs on the Beretta A300 Ultima

The A300 Ultima bears a very close resemblance inside to the 391 from which it is derived. The 391, which debuted in 2000, was Beretta’s flagship semiauto for nearly a decade, and many think it’s the best Beretta semiauto ever. Like the 391, the A300 Ultima’s gas system is comprised of just two removable parts, a piston and a buffer tube with a link that connects it to the bolt. There’s also a relief valve on the front of the barrel ring. You were encouraged to take that apart and clean it with the 391—but not with the A300 Ultima, which eliminates one maintenance chore. Also, the gas piston on the A300 guns is different and, to my mind, easier to clean than a 391 piston. The magazine cap has been redesigned as well, which doesn’t seem like a big deal—but the very complex, seven-piece (!) 391 cap would gall into place, and most 391 owners learned to pack a strap wrench with their gun-care kit to remove the cap when it stuck. The upshot is that the A300 Ultima is a simple gun to take apart and clean. Although, like other Beretta semiautos, it will can go a long time without much care.

On the outside, the gun comes with the enlarged bolt handle and bolt-release button that waterfowlers demand these days, as well as a milled-out port to make fast reloading easier. It lacks the magazine cutoff button of the 391, but I can’t ever remember using the cutoff on either of my 391s. Like all Beretta safety buttons, the 300 Ultima’s safety sits at the front of the trigger guard.

The 28-inch barrel has a 3-inch chamber and a stepped rib and is tapped for Beretta’s older Mobilchoke system. The stock includes a version of Beretta’s Kick-Off recoil reducer, which can be removed to alter the stock length. The stock also comes with a shim kit to help adjust fit as well.

How We Tested the Beretta A300 Ultima

Three mornings in a row, we hauled our test guns into the field where we hunted teal in wetlands, rice fields, and shallow-lake environments. After the hunts, we’d return to the lodge to shoot patterns, test for point of impact, check trigger pulls, and weigh and measure guns. After that, we’d shoot the guns as much as possible at on the club’s clay field. The A300 Ultima shot a desirable 60 percent above point of aim, 40 percent below. With 1 ¼-ounce loads of Federal Speed Shok No. 2s and a Modified choke, it patterned at about 75 percent (105 hits) in a 30-inch circle at 35 yards. While most other guns in the test patterned more efficiently, this was a definitely a duck-killing pattern—and what you would expect from a Modified choke at the distance. The trigger pull measured 5.14 pounds, and the gun weighed 7.7 pounds.

How the A300 Ultima Performed

As a fan of both heavy-ish duck guns and Beretta semiautos, I found the A300 Ultima to be very shootable. It pointed and swung well, and the 60/40 point of impact suits both shooters who like to see the bird a little bit and those who would cover it up with the barrel.

The enlarged controls help the gun load and unload easily. The bolt-release button might be a little too easy to use. It only takes a bump to close the bolt, and it’s possible to close it inadvertently. It’s not unsafe, nor is it a problem unique to this particular button, but it’s annoying nevertheless. On the plus side, the magazine cap is simpler than the 391 cap and it goes on and off without sticking, so that’s an improvement. Some people hate—or can’t reach—safeties in front of the trigger guard. If you have very short fingers, this gun may be a challenge to shoot.

While I liked the gun overall, the Kick-Off recoil reducer was a puzzling disappointment. A couple of us, myself included, felt as if the gun were hitting us harder than usual in the cheek. For whatever reason, the Kick-Off seemed to accentuate muzzle rise, although everyone feels a gun’s recoil differently. I would buy an A300 Ultima if I were in the market for a waterfowl gun, but I’d likely remove the recoil reducer, which is easy to do.

Our test model came in black synthetic (camo guns are also available) with a greyed receiver that gave the gun a distinctive look. The stock mimics the design of the A400 stock, although the rubber-covered Kick-Off slightly ruins the effect. The steel surfaces bear a matte finish that look similar to the finish on the A300 Outlander or my old 3901—both of which had to watched carefully and cleaned as soon as I got home, as rust spots will bloom on them almost before your eyes. The A300 Ultima is well put-together and it functioned perfectly for us, with the exception of the Kick-Off reducer.

The A 300 Ultima is a versatile gun. Although it won’t shoot 3 ½-inch shells, it handles everything else, including light target loads. With its heft and 60/40 point of impact, it would make a good target gun as well as an excellent dove gun. If you didn’t mind the weight, you could hunt turkeys with it, especially as the receiver is grooved for an optics base. You could also take it into the uplands, especially if you choose the 20 gauge model.

Berettas made their name through reliability, and this gun seems to follow right in the footsteps of all its predecessors. We experienced no failures of any kind and the gun cycled hunting and target loads alike. Other Beretta semiautos I have shot, including the A300—which is the same gun with fewer features—have no trouble with reloads or cheap steel-headed field and target loads that cause problems with some guns. I would predict the A300 Ultima to do the same.

The A300 Ultima is a great value. You get a proven, reliable, durable design for under $1,000, and that includes features that many people put on a gun aftermarket, like enlarged bolt releases. The Kick-Off feature, when it works on other models, reduces recoil very effectively. I can’t say if our gun was an outlier or if the Kick-Off needs some more R&D. But the Kick-Off comes off easily, and you’re still left with a gun that stacks up well against the Winchester SX4 and costs $20 less. I would definitely look at the A300 Ultima if I were shopping for a duck gun.

What the Beretta A300 Ultima Does Best

What the Beretta A300 Ultima does best is shoot. And shoot. Beretta semiautos are famous for functioning, and the A300 Ultima should prove no exception. The 12 gauge would make an excellent duck, dove, target, and, in a pinch, a turkey gun. The 20 could handle all those chores, albeit at closer range, and would fit right into the uplands as well.

Heavy guns are easy to shoot and hard to carry. Light guns are easy to carry and hard to shoot. The A300 Ultima is a heavy gun so while it shines in situations where you sit or stand there and shoot, I’d pick a different 12 for turkeys or upland hunting if it were my decision. And, surprisingly, thanks to the Kick-Off, which seemed almost to make recoil worse, the A300 as we shot it was not a soft-recoiling gun. My guess is that removing the Kick-Off might make the gun softer-shooting.

The A300 Ultima is an excellent choice in a quality duck hunting semiauto for under $1,000. It will shoot a wide range of 2 ¾- and 3-inch loads and it’s a gun you can take to the range for skeet or sporting clays, to the blind or to the dove field. And you can use the money you save by buying this gun instead of a top-of-the-line model to purchase an aftermarket choke if you feel the need to improve pattern performance. The Kick-Off reducer was a disappointment to me, but even without it, the gun’s gas system cuts the kick on its own. In all other ways this gun would make an excellent choice as an affordable, high-quality gas semiauto waterfowl gun.