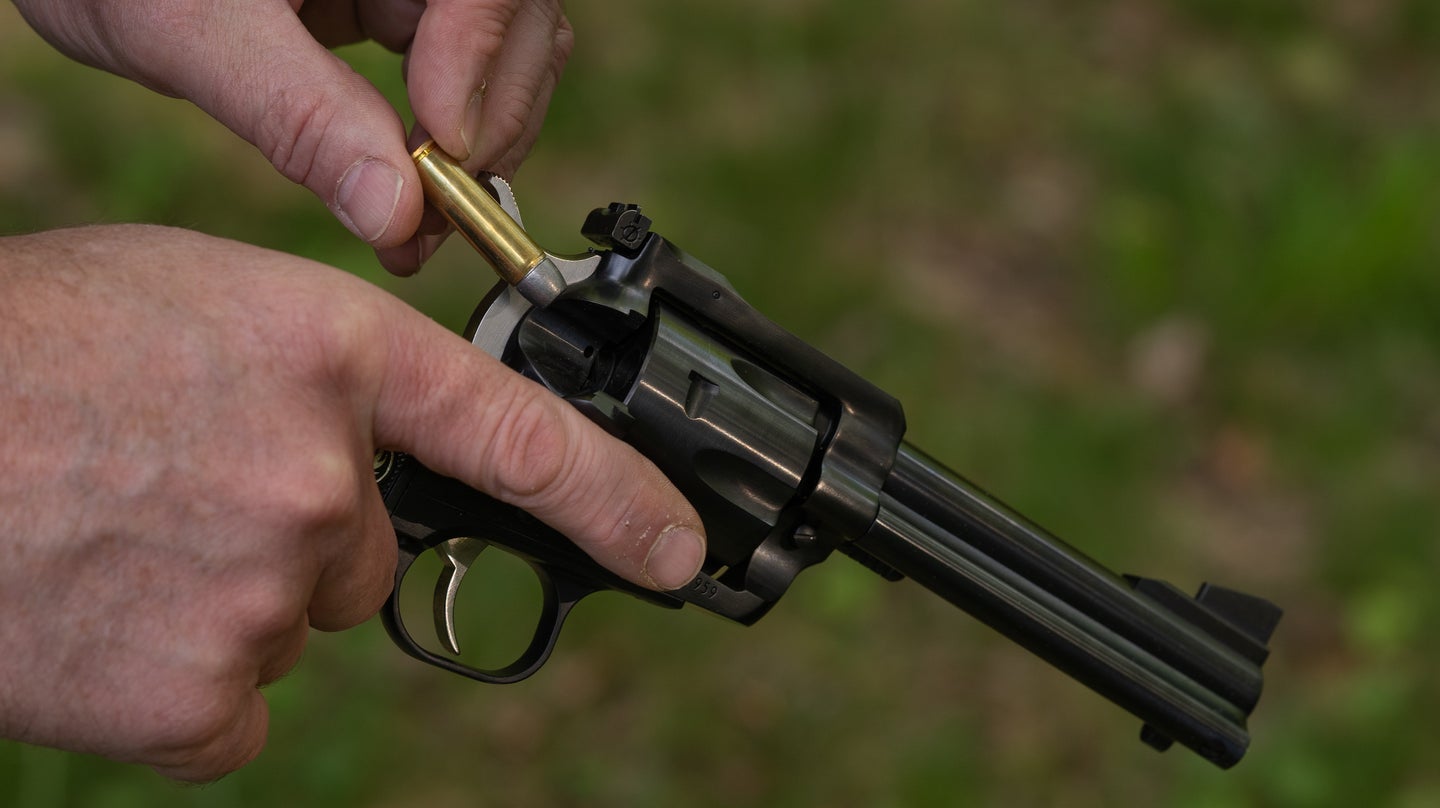 These handgun cartridges are easy to find, and they won’t break your wrist

If you want to hunt deer with a handgun, what cartridges will work? The big boomers like .454 Casull, .460 and .500 Smith & Wesson, and 480 Ruger are plenty powerful, but what about more common cartridges that won’t wrinkle your wrist and blind you with beach-ball-size fireballs? Here’s a look at seven popular handgun cartridges and how they can work for deer hunters who don’t want to hunt with hand cannons.

Beyond the legal requirements, there are no hard and fast rules for selecting the best handgun cartridge for hunting deer. But there are some sensible guidelines along with a few things to keep in mind when using a handgun in the whitetail woods.

Dedicated big game loads for the 9mm Luger are hard to find as unicorn poop. Go with a hardcast bullet or a deep penetrating load like Buffalo Bore’s +P+ 115 gr TAC-XP bullet.

There’s no question you can kill deer with a 9mm, but things can get tricky with this cartridge. This is partly because a lot of 9mm pistols are itty bitty and have short barrels. This reduces velocity and makes them harder to shoot accurately. For best results, keep shots at bow range.

You’ll struggle to achieve 500 foot-pounds with the 9mm, but Buffalo Bore’s 115-grain +P+ load with a Barnes 115-grain TAC-XP bullet at 1400 fps does, and it will penetrate more than 16 inches. Federal’s 135-grain Hydra-Shok Deep load, with less than 400 foot-pounds of energy at the muzzle, will drive almost as deep. Energy, as stated, is only an indicator. Federal’s Syntech Solid Core +P 147-grain load and Buffalo Bore’s 147-grain Outdoorsman load will shoot through any deer. Bear guide Phil Shoemaker killed a grizzly with several shots from the latter.

Doubletap offers one of the only 40 S&W loads that will deliver 500 foot-pounds at the muzzle. It will penetrate deeply too.

The .40 Smith & Wesson is essentially a 10mm light, which is exactly what it was intended to be. Once the poster boy for law enforcement, it’s now fallen from grace. As an auto pistol cartridge for deer hunting, its effectiveness—like everything else about it—is somewhere between the 9mm and .45 Auto.

It’s hard to find a .40 S&W load that meets the 500-foot-pound threshold, and maybe it’s not that important. Remington’s standard 180-grain JHP load, though only generating about 412 foot-pounds of muzzle energy, will provide 16 inches of penetration. Doubletap’s 125-grain TAC-XP load at a sizzling 1390 fps does deliver 500 foot-pounds and will penetrate even deeper.

Many .45 Auto loads have bullets that are sensitive to velocity. The 160-grain Barnes TAC-XP bullet is not, and the Buffalo Bore +P load is a screamer.

The .45 Auto has the gusto to get the job done but its problem is reach. It’s never been known as a high-velocity cartridge and at 50 yards most loads are lumbering along, and bullet upset can be questionable.

I think Buffalo Bore has the two best options. The first is the +P 160-grain Barnes TAC-XP load at 1250 fps, and with more than 550 foot-pounds of muzzle energy. This bullet will fully mushroom at velocities between 900 and 1250 fps, which will take you well past 50 yards. The other is the +P Outdoorsman load with a 255-grain hardcast bullet at 925 fps. The bullet will not deform, but with its flat meplate, it will damage lots of tissue and you can shoot through two deer at the same time if you like.

Testing has shown good results with Hornady’s Handgun Hunting load for the 10mm. Place this bullet correctly and it will deliver your deer.

Of all the auto-pistol cartridges the 10mm is clearly the best suited for deer hunting. The hottest of the 180-grain loads will carry more than 1000 fps to 100 yards, and that kind of velocity on impact is what’s needed to ensure bullet upset. Of course, the goal is to find a bullet that does not over-deform and sacrifice penetration.

At sensible bow hunting distances, most any quality 10mm self-defense load should work, just avoid the gimmicky rounds. If you’re going to stretch the distance, Hornady has three good options. Their 135-grain MonoFlex Handgun Hunter load (518 foot-pounds) will push to about 15 inches, their 175-grain Critical Duty load (523 foot-pounds) will drive a bit deeper, and their standard 180-grain XTP load (650 foot-pounds) will out-penetrate both.

A double lung hit with this 130-grain, hardcast .327 Federal Magnum load will put your deer down in about 50 yards, and he’ll be bleeding out of both sides.

Many have questioned my recommendation of this cartridge, but I know it works because I’ve used it successfully so many times. However, its ability to do the deed on deer is highly dependent on the ammunition.

Buffalo Bore offers a 130-grain hardcast load for the .327 Federal Magnum that will generate 1400 fps out of a 4.6-inch barrel and easily exceeds the 500-foot-pound threshold. This bullet has a large, tissue-damaging meplate, and will shoot through 36 inches of ordnance gelatin. It should handle deer even at the outer edges of bow range. For 2022, Federal announced a 100-grain Swift A-Frame load for the .327 at 1500 fps. It should perform well but has yet to make it to dealer shelves.

The HammerDown load is ideal for deer out of a .357 Revolver. It works even better out of a lever action carbine.

For most, the .357 Mangum is the best handgun cartridge for deer hunting. It does not hit as hard or make as big of a hole as the .44 Magnum, but the .357 Magnum is enough gun for deer, and more importantly, it’s enough gun without too much recoil.

The best deer-hunting ammunition I’ve tested for the .357 Magnum is the Federal HammerDown load. Out of a 4.6-inch barrel, it’ll do 1300 fps, upset with a frontal diameter of more than a half-inch, and penetrate to 18 inches or more. At 25 yards, it will still hit with more than 500 foot-pounds of kinetic energy. With about 16 inches of penetration and more than 600 foot-pounds of energy at the muzzle, Hornady’s 130-grain MonoFlex Handgun Hunter load has promise too.

The .44 Magnum is death on deer. It’s powerful enough that ammo selection is not as critical as with the lesser cartridges.

Short of the .454 Casull and other hand cannons, the .44 Magnum is the king of hunting handguns. It has the power to handle any critter in North America, you just pay for that power with recoil. With the hottest loads recoil approaches 20 foot-pounds with muzzle energies as high as 50 times that. On the plus side, if deer are the only thing you’re hunting, you don’t have to be too particular in the ammunition you use.

The now discontinued Sig Sauer 240-grain V-Crown load is a good example of a common 44 Magnum load. At 1300 fps it will give you about 900 foot-pounds of muzzle energy and with modest expansion, it will push as deep as two feet—all without full-power .44 Magnum hand-numbing recoil.

But even 15 foot-pounds of recoil is a lot in a handgun, and there are lots of used .44 Magnums that come with a half-box of ammo for a reason. On the plus side, you can shoot lighter recoiling .44 Special ammo out of a .44 Magnum and still hammer the hell out of deer.

Slowly and unfortunately slipping into obsolescence, the .41 Magnum might be the best conventional handgun cartridge available for deer hunting.

When it comes to hunting performance, take everything you think you can do with a 10mm pistol and add 20 percent for the .41 Remington Magnum. It should be the most popular conventional handgun cartridge for deer hunting. With the hottest loads, recoil is about half that of the hottest .44 Magnum loads, and with its larger diameter bullet, it’s superior to the .357 Magnum. The downside is the limited selection of new revolvers and factory ammo.

Someone with some clout needs to convince Ruger to offer the .41 Magnum in a 5.5-inch barreled Blackhawk with the Bisley grip frame. Then, the new Ruger-owned Marlin could start making 1894 lever guns to go with it. I’d get one of each and call them “Precious One” and “Precious Two,” and practical folk would be jealous.

This cartridge is frequently overlooked partly because it’s old; it’s an original black powder cartridge that dates to 1873. However, modern .45 Colt (Long Colt) ammunition operates at a different level than the loads gunslingers used to fight it out with. In terms of power, it’s right there with the .44 Magnum. There are, however, not a lot of hunting loads to choose from and just as with many common handgun cartridges, Buffalo Bore is the source.

They offer the “Deer Grenade” for the .45 Colt, which will push a 250-grain medium-cast bullet to more than 1500 fps out of a 5-inch barrel. That’s right at 1300 foot-pounds of muzzle energy, and it should prove effective beyond 150 yards. However, shooting this load is like trying to hold onto a mule’s leg when it kicks. Tough guys might be able to handle it, but they’ll never forget it. Do your research, just like some shooters, some guns cannot handle this load.

A more than four-pound revolver for the 350 Legend is not conventional by any measure, but it is special, and the S&W 350 is the newest hand cannon for hunting.

The 350 Legend was designed to be AR15-compatible and meet straight-wall cartridge requirements in several states. It does both very well and has found favor as a good deer killer outside of that realm. So, Smith & Wesson thought it would be just super cool to build a 71-ounce (4.4-pound) revolver with a 7-inch barrel in 350 Legend. This is not a common handgun or a common handgun cartridge, and on the exciting scale, it probably ranks right up there with the world cornhole championship. It is however, at minimum, unique.

This revolver will deliver the same performance at 50 yards that a 350 Legend rifle will deliver at around 200. Bullet performance might be questionable, but the blast at the muzzle won’t be. You can have your very own S&W 350 for only $1600.00.

Read Next: How to Pick the Best Handgun Caliber For Hunting

Can I hunt deer with a 9mm Handgun?

Yes, you can. But you must consider shot placement, barrel length, and load selection and limit your range to around 25 yards. Most 9mm handguns have short barrels and are difficult to shoot accurately. Also, big game loads for the 9mm are hard to find. We recommend either a hardcast bullet or a deep penetrating load like Buffalo Bore’s +P+ with a 115 gr TAC-XP bullet.

Each cartridge has its pros and cons. The .357 Magnum has less recoil than the .44 Magnum and plenty of power for taking whitetail deer. It’s even deadlier in a lever-action rifle. The .44 Magnum has enough power to handle any big game animal in North America, but many shooters dislike its heavy recoil. If you’re only hunting deer, though, you can shoot softer-kicking .44 Special out of a .44 Magnum handgun.