The 8 Best Lever Action Rifles Ever Made

From the Civil War to WWI, we were a lever-gun nation, and the repeaters turned out during that era are still the best lever action rifles ever produced 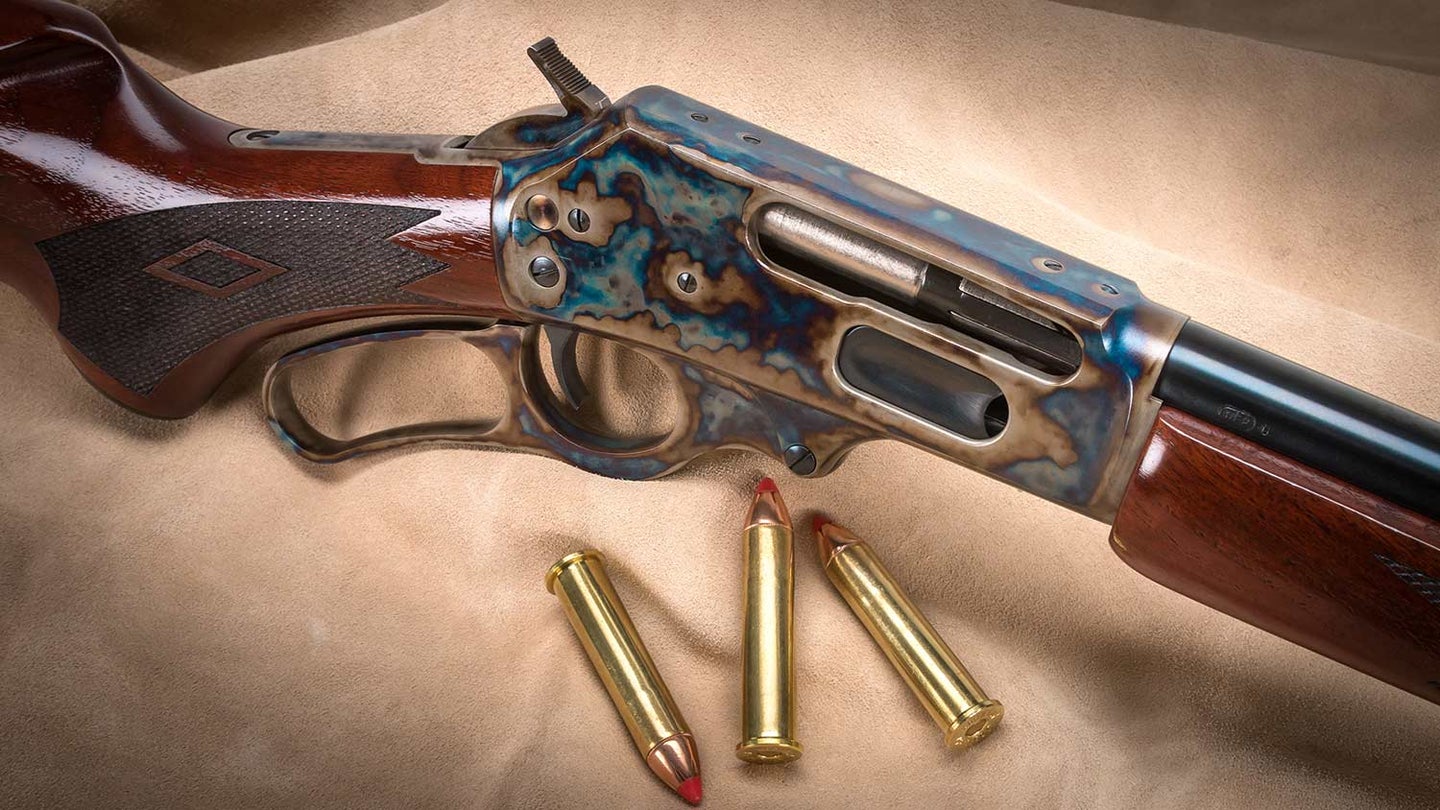 Lever action rifles are turning up by the scores in used-gun racks, their wooden stocks battered and once-blued steel worn silver. The grandfathers who used them are afield in happier hunting grounds, and the grandkids who would have gotten them either don’t hunt or prefer something tactical.

The time of the lever action rifle as America’s Number One Gun has passed.

But from 1861 to 1918—from the Civil War to World War I—we were a lever-gun nation. Lever action rifles took us from the era of the muzzleloader to the modern bolt-action. Nor have we forgotten that. There is still no shortage of people to whom “deer rifle” means “lever action rifle.”

Cowboy Action Shooters are behind Winchester’s re-introduction of the Model 1873 lever gun. Marlin offers no fewer than 10 variations of the Model 1895, or you can go to any number of custom shops who will build you a hot-rodded 1895 for a great deal of money. Lever action rifles can shoot at long range, drop elephants, and print minute-of-angle groups. Doug Turnbull has transformed them into an art form with his magnificent restorations. And if you want an original lever gun, scars and all, you need only look to that used-gun rack.

The best lever action rifles are neither gone nor forgotten. Here are the eight greatest models from the lever action’s Golden Age.

It arrived in time for the Civil War, and introduced the concept of fire superiority to the battlefield. In the hands of a skilled soldier, a Springfield Rifle Musket could get off three rounds per minute. The Henry Repeating Rifle, which held 15 copper (later brass) cartridges in a tubular magazine, could be fired 24 times in 60 seconds. This new lever gun was to the rifle musket as an M4 is to an ’03 Springfield.

The Henry was not robust, nor was it very powerful. It used a .44 rimfire cartridge whose realistic maximum range was perhaps 150 yards. But the Henry lever action could pour out the lead, and of the 8,000 or so that served in the Union Army, many were private purchase. The gun cost $40. A Union corporal made $13 a month. But the Boys in Blue were glad to spend the money. They had seen fire superiority at work.

The Model 1866 is the first Winchester lever action rifle, courtesy of Oliver F. Winchester, who took over the New Haven Arms Company during the Civil War and changed its name to Winchester Repeating Arms in 1866.

The 1866 was a 14-shot .44 rimfire lever gun with a distinctive brass-alloy frame. Mechanically, it was much improved over the Henry with a loading port added to the receiver and the tubular magazine reinforced by a wooden fore-end.

Native Americans called it “Yellow Boy,” because of the frame. The Sioux and Cheyenne had a fair number of them at the Little Big Horn, and they proved superior to the far more powerful .45/70 Model 1873 Springfield cavalry carbine.

The Model 1866 had a long run. It was produced until 1899, and 720,000 were made. How many lives it saved will never be known. If you had Yellow Boy in your saddle scabbard, you had a chance of emerging alive from whatever you got yourself into.

Winchester Repeating Arms has long billed the Model 1873 as “the gun that won the West,” and in this case, they may just be right. When the West really was wild, the Model 73 lever gun was the go-to rifle.

It was the direct offspring of the Yellow Boy, but the brass frame was replaced by a much stronger iron one, and the anemic .44 rimfire cartridge was succeeded by the more powerful centerfire .44/40. The .44/40 was a pistol cartridge, but that meant that you could carry both a Model 1873 and a revolver in that caliber and swap ammo without a care in the world.

In 1875, Winchester began the practice of selecting its most accurate Model 73 barrels and building guns around them with set triggers, extra-nice finish, and the engraved legend, “One of One Thousand.” These special-edition lever action rifles sold for $100, which is the equivalent of $2,300 today. In 1950, an A-list Hollywood western starring Jimmy Stewart was made entitled “Winchester 73.”

Over 720,000 Model 73s were made between its introduction and 1923, when it was finally discontinued.

(In 2013, Winchester reintroduced the Model 1873 lever gun to much fanfare and still offers new 1873s in a host of configurations.)

Read Next: The Gun that Won the West

It’s also a prime example of the way firearms used to be made. Its mechanism has a glassy smoothness that you can find only in other firearms of the time and in hardly any modern ones at all. Although it came from a factory, the Winchester 86 was a handmade rifle.

Here is a lever action rifle of superlatives. “Model 94” is practically synonymous with “deer rifle.” Another John M. Browning design, it was originally intended as a black-powder lever gun, but when it came into production in 1895, it was chambered for the brand-new smokeless .30 WCF (later called the .30/30), and the two became synonymous.

The Model 94 was short, handy, light for its time, carried nicely in the hand, snaked in and out of a saddle scabbard, fired fast, was dead reliable, and kicked very little. It was not all that accurate, but in those times, no one cared. Nor could it accept a scope; but this was in the era before scopes.

So popular was the Model 94 that it was the first commercial sporting rifle whose sales exceeded 7 million. Winchester produced it until 2006, reintroduced it in 2010, and currently offers eight versions of the 94. Fitted with good iron sights, it’s still a terror to deer everywhere.

If ever there was a rifle that was ahead of its time, it’s Arthur Savage’s hammerless masterpiece. Because of its rotating-spool magazine (later changed to a detachable box), this lever gun could use spitzer bullets rather than flat-points, greatly extending its range. It had enough strength to handle modern, high-intensity cartridges. It had a good trigger. It ejected to the side, not up, so you could mount a scope on it. It was dead reliable and, for a lever action rifle, accurate.

The Savage Model 99 was chambered for a wide variety of cartridges, and I’d guess that most rifles were sold in .300 Savage, which is very similar to the .308. However, the round that brought the 99 to glory was the .250/3000 Savage, which fired an 87-grain bullet at the then-unheard-of velocity of 3,000 fps.

The 99 had a long and glorious run, lasting from 1899 to 1998. Today, they’re becoming available in all calibers, models, and conditions. If it were me, I’d look for a rotary-magazine model in nice shape, chambered for the .250/3000. It was a jewel when it was made, and it’s still a gem among rifles.

Is there a stranger story than that of the Model 1895, the Rifle that Will Not Die? I doubt it. This lever gun has had three incarnations: The first, which appeared three years before the turn of the 19th century, was a good, solid lever action rifle that never really caught on. It ran for only 22 years and only 18,000 were made. Incarnation Number Two came in 1972, when Marlin reintroduced a version based on the Model 336 frame, and chambered it in .45/70. This coincided with a resurgence of interest in the ancient cartridge. People were discovering that it could drop deer with dispatch and very little recoil, or you could load it up to near-.458 levels. In 2006, Hornady came out with its plastic-tipped LEVERevolution ammo that enabled you to use spitzer bullets in a tubular magazine, and turned a 150-yard lever gun into a 300-yarder.

Then came the customized 1895s, of which there are currently 10 in the Marlin line. Marlin has its own custom shop which will turn out something really fancy for you, and there are a number of independent custom gunsmiths who specialize in turning Model 1895 lever guns into objects of wonder.

There are 2.2 million of them out there, and they’re essentially the same gun: a lever action rifle of lovely balance, handsome lines, infallible performance, excellent accuracy, and the ability to use Short, Long, or Long Rifle ammo interchangeably.

Good 39As do not come cheap, and the really nice, or rare, ones cost serious money. Is there such a thing as a perfect firearm? No, but this lever gun comes pretty close.