Rifle makers have come out blazing for 2022, with ultralight mountain rigs, precision chassis rifles, and the reintroduction of a classic Marlin lever gun 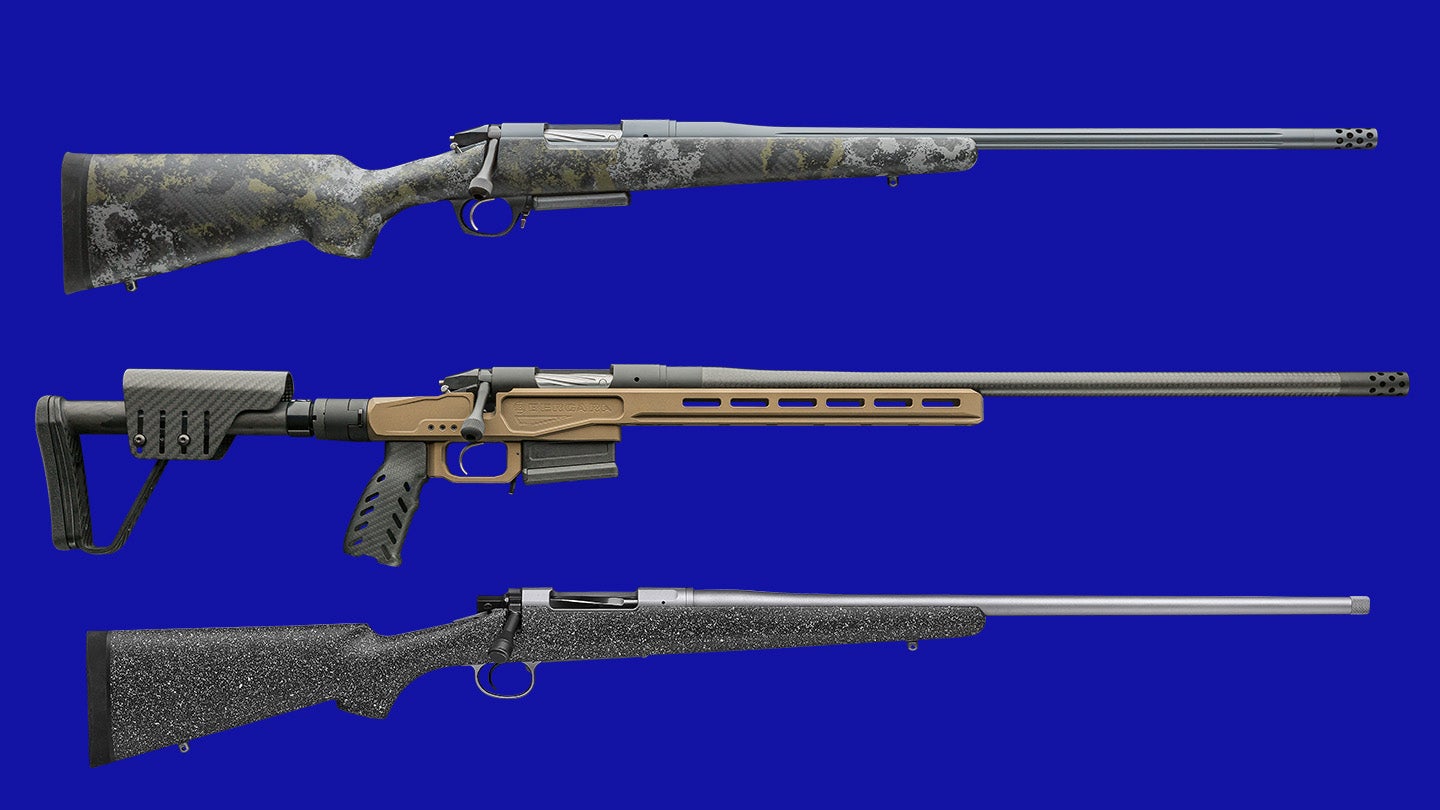 For quite a few years, new rifle introductions were dominated by variations of the AR-15 and other tactically styled rifles. And last year, new rifle introduction were lacking altogether, understandably. But neither is the case for 2022. There are plenty of new rifles out this year, and the latest crop is dominated by guns purposefully engineered for stretching the distance, whether for target shooting or hunting—although you certainly could hunt with any of the guns below. It’s not all long-range stuff, though. We’ve got the revival of a classic lever gun from Marlin, the introduction of a very unusual bolt-action rifle series from CZ-USA, and a well-outfitted and affordable new hunting rifle from CVA. And for those tactical-minded shooters, Springfield-Armory has something just for you. So let’s get to it: Here are 12 of the hottest new rifle introductions for 2022.

The new limited-edition Benelli Lupo has an exclusive gloss finish on it’s metal parts that’s designed to prevent rust, corrosion, and abrasions. The coating is so effective, it’s backed by a 25-year warranty. The rifle has a handsome AA-grade, checkered walnut stock in a satin finish. Additional features include a sculpted bolt handle, three locking lugs, and a 60-degree throw. The free-floating barrel is threaded at 5/8×24, and stock spacers allow the length of pull to be tuned from 13.8 to 14.75 inches. The trigger can be adjusted for reach and weight, from 2.2 to 4.4 pounds. This Limited Edition Lupo has an elegant appearance with a futuristic flare, and it easy to carry at just a tad over 7 pounds.

This affordable rifle from Franchi is now available in two new chamberings: the .350 Legend and 6.5 PRC. The .350 Legend comes with a True Timber Strata finish on the stock and a Cerakote finish on the barrel and receiver for premium protection against the elements. This one tips the scales at 7.9 pounds, and with its 22-inch barrel, it has an overall length of 44.25 inches. The Momentum Elite chambered for the 6.5 PRC has the same synthetic stock but features the Elevated II camo pattern from Optifade. This rifle also comes with a detachable muzzle break and weighs in at 7.5 pounds. It has a 24-inch barrel and an overall length of 46.25 inches. Both are relatively easy on the wallet at just under $900

Bergara’s new-for-2022 Canyon rifle is well-outfitted for the hunter who wants to hike miles into the backcountry on foot and push bullets at extreme distances. This featherweight goes 6.2 pounds or a little more, depending on the chambering, and comes standard with either a 20- or 22-inch fluted barrel with a threaded muzzle. The AG Composite 100-percent carbon-fiber stock is finished with the Swamper Rouge Camo pattern, and a user-adjustable TriggerTech trigger is standard. The rifle has a Bergara premium action, accepts Remington 700 scope bases with 8×40 screws, feeds from an AICS-pattern detachable magazine, and comes in seven popular chamberings, all with appropriate twist rates to handle high BC bullets. Depending on chambering, the overall length is between 41 and 42 inches.

The new Bergara MG Lite looks like a heavy rifle designed for long-range competition shooting, but this chassis rifle, at its heaviest, weighs just 6.8 pounds. It is available in four popular long-range chamberings and features either a 22- or 24-inch carbon-fiber wrapped barrel, a folding magnesium chassis stock, a TriggerTech trigger, and a Burnt Bronze Cerakote finish. It feeds from the very popular AICS-style detachable magazines, accepts Remington 700 scope bases with 8×40 screws, and, of course, the muzzle is threaded for use with the supplied muzzle break or a suppressor. It’s not exactly cheap for just under $3K, but it’s not bad either for a long-range precision rifle this light and loaded with this many features.

Introduced in 2019, the original Cascade was CVA’s first centerfire bolt-action rifle. The new short-barrel SB Series has all the same basic feature as the Cascade but comes with an 18-inch barrel for hunting in tight spaces and for use as a handy truck gun. The 4140-carbon steel barrel comes with a threaded muzzle. The bolt has a 70-degree throw with plenty of clearance for a riflescope, and the action feeds from a flush-fit, detachable, four-round magazine. The barrel is coated with Graphite Black Cerakote, and the fiberglass-reinforced synthetic stock has a Veil Tac Black pattern. It’s also fitted with dual front sling swivel studs for the attachment of a bipod. Given the stock’s adjustable length-of-pull, the Cascade makes an ideal youth rifle that can grow with a shooter and yet last them a lifetime. It comes with a MOA guarantee and costs less than $700

CZ USA has a new bolt-action design with a host of innovative features to improve shooter interface, and for 2022 they’re offering four diverse models for you to choose from. The Alpha (upper right in the photo above) is a synthetic-stocked sporter, suitable for hunting or long-range application. The Lux (upper left) is a hunting rifle with a Euro-style select walnut stock. The Range (lower right) is a precision rifle with a laminated stock that incorporates an adjustable cheekpiece. And the unusually configured Trail is a lightweight chassis rifle with a 16-inch barrel, collapsing butt stock, and AR-15-style pistol grip. All versions of the 600 feature a tang-mounted safety, a locking bolt that allows the rifle to be unloaded when it is on safe, a lockable magazine, and the ability use the same action and swap between cartridges of the same size-class.

Just over a year after acquiring Marlin, Ruger has introduced their first lever-action under the Marlin brand. It is the very popular 1895 SBL, chambered in .45-70 Government. Though this is not really a new rifle, it signifies the return of an iconic brand and does have some features the old 1895 SBL did not, including a fiber optic front sight, spiral fluted bolt, and a threaded muzzle. Like previous 1895 SBLs, this lever-gun features all-stainless metal parts, a laminated stock, and an XS Sights Lever Rail with an integral ghost ring sight. As before, with a wide array modern .45/70 ammunition to choose from, the 1895 SBL is a lever-action centerfire rifle suitable for deer in the thickets, elk in the timber, and even dangerous game.

One of the most appealing features of the Mossberg MVP rifle is that it feeds from AR-15 magazines. This makes one of these rifles a great compliment to an AR-15 in the same chambering, and for 2022 Mossberg has added the .300 Blackout to the MVP Patrol rifle. This version has a 16.25-inch threaded barrel that comes with an A2-style muzzle break, which can be removed to allow the use of a suppressor. It also features Mossberg’s patented and user-adjustable LBA trigger. A fluted bolt, fiber-optic front sight, sling swivel studs, and Picatinny rail are standard. With a 6.5-pound out-of-the-box weight, this rifle won’t weigh you down, and its price won’t break the bank, either.

Given Nosler’s reputation for bullets and ammunition, shooters sometimes forget that Nosler also makes terrific rifles. In mid-2021, Nosler introduced the Model 21, and these rifles are now available in 2022. Depending on chambering and barrel length, the Model 21 will weigh anywhere from a touch less to a touch more than 7 pounds. It has a wire-EDM machined receiver, fluted bolt, M16-style extractor, adjustable TriggerTech trigger, Shilen match-grade barrel, and a McMillan carbon-fiber stock. It is offered in all Nosler cartridges as well as the 6.5 Creedmoor, 6.5 PRC, .280 Ackley AI, .308 Winchester, .300 Winchester Magnum, and 375 H&H. The metal is coated in Metal Grey Cerakote, the barrel is threaded, and a thread protector is supplied.

This new rifle from Savage represents a collaboration between Savage and Magpul, matching an 18-inch heavy carbon-steel barrel and factory blueprinted 110 action with a Magpul stock that’s fully adjustable for length of pull and comb height. The stock and action are also compatible with AICS-style magazines. The stock’s fore-end has M-Lok slots on the sides and bottom for attaching accessories. The fast-twist barrel and all other metal parts come with a Cerakote tungsten finish. The muzzle is threaded, and a Picatinny scope rail is standard. The rifle weighs 8.9 pounds out of the box and is 38.5 inches long. Available for both right- and left-handed shooters.

There are not a lot of new semi-automatic tactical rifles for 2022, but the new Saint Edge ATC from Springfield-Armory might be enough to satisfy. This rifle is built around an accurized tactical chassis for the upmost in precision. The lower handguard system is monolithic, and the barrel is 100 percent free-floated. The Saint Edge ATC is chambered for the .223 Remington, but the chamber is cut for the .223 Wylde. This is not a new cartridge; it is simply a name given to the way the rifle’s chamber is cut, which offers an ideal compromise for the safe and accurate firing of both .223 Remington and 5.56 NATO ammunition. The Saint Edge ATC will be available with a Black or Coyote-Brown Cerakote finish. The Coyote Brown version is the Elite model and comes with a LaRue 2-stage trigger. Both versions of the Saint Edge ATC come with a sub-MOA accuracy guarantee.

Weatherby has updated their incredibly lightweight Backcountry and Backcountry Ti rifles for 2020. The 2.0 versions are outfitted with a brand-new carbon-fiber stock that Weatherby claims is the lightest in the industry. There are four versions of the updated rifle. The 2.0 Carbon features a BSF-tensioned carbon-fiber barrel and is now also offered for the .30-378 Weatherby cartridge. It is available with either a steel or titanium (Ti) action. The standard Backcountry 2.0 has a steel receiver and a fluted steel barrel. It too can be had with a titanium action. Depending on the chambering, the steel-receiver rifle weighs as little as 5.3 pounds, while the titanium version goes down to a scant 4.7 pounds. Carbon-fiber barreled Backcountry 2.0 rifles are about a half-pound heavier. According to the company, when chambered in 6.5 WBY RPM, the 2.0 Ti is the lightest/fastest hunting rifle on the market. All come with a sub-MOA accuracy guarantee.