Trick Out Your Favorite .22 Pistol to Create the Perfect Plinker 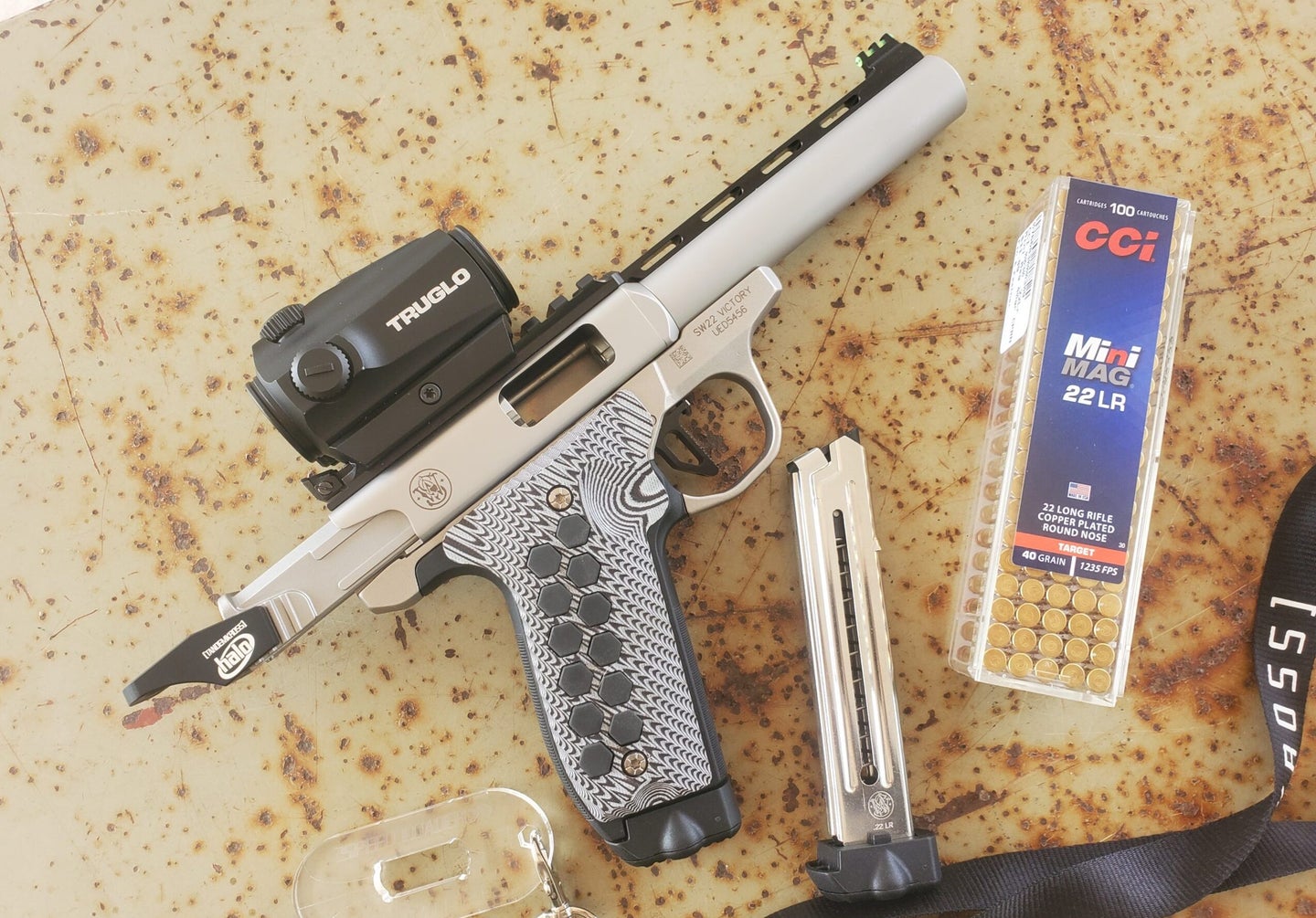 It is a well-known fact that it’s entirely possible to start with a new Ruger 10/22 rifle and replace factory parts with aftermarket pieces until, like the Tin Woodman in the Wizard of Oz, it has none of its original parts left. And you have a whole new gun. Countless 10/22 owners have done exactly this.

It’s a slightly lesser-known fact that there are almost as many aftermarket parts available for certain .22 pistols: the Ruger Mark IV, the Browning Buckmark, and the S&W Victory. There are not quite as many parts for the Taurus TX22 or the KelTec33, but there are some, and probably will be more tomorrow.

I have not been able to replace every single part of the Victory I bought for letting off steam at steel plates between rounds of Skeet and 5-Stand, but I’m getting close. And, swapping parts in my pistol is more than just a fun tinkering hobby. It has made the Victory into a much better shooter. The Victory is not an expensive pistol. I haven’t spent as much in parts as I paid for it originally, but I might be close. I try not to think about that.

Tandemkross makes great stuff for rimfires—with the exception of their pistol case, which is flimsy—as does Volquartsen. And a search for aftermarket parts turns up other manufacturers, too. You can go so far as to add barrels, too, but they are pricey and so far I have resisted doing that.

All of the additions my pistol have been DIY jobs, and all of them, with one exception, went on easily in a couple of minutes. These four below were the essential parts that boosted my Victory’s performance and function.

Adding an aftermarket firing pin dramatically reduced the number of failures I experience at the range.

A sharp, rugged, precisely made extractor cuts way down on misfires and stovepipes. Before I switched the firing pin and extractor, the pistol was picky about which brands or ammo it would function with. Now it chews through the cheap stuff with very few glitches.

Several makers offer enlarged charging handles. They are great for clearing the few malfunctions I still experience. They make the pistol a lot more user friendly for new shooters. And for me, too.

One of the reasons I picked the Victory in the first place was its trigger pull, which was lighter than that of a few other guns I tried. So, I wasn’t convinced I needed one of these, but once you start adding stuff, it’s hard to stop. Also, I was wrong. The new flat trigger feels great, and it lightened the pull from around 3½ pounds to 2½. It comes with set screws that adjust for pre- and post-travel as well.

This was the one part that was a chore to install, but I did figure it out, and it was worth the time and effort. Word of advice: Tandemkross sells an extra spring and detent separately so when you lose the first one during the installation, you can finish the job anyway. It was $2.99 extremely well-spent on my part.

Tandemkross calls all its .22 triggers “Victory” triggers, by the way, not just the trigger for the Victory pistol.

After that, I added stuff just to add stuff, including more Tandemkross parts including: “Hivebrid” grips; a captured spring-and-guide rod to reduce the chance of launching a spring during disassembly; magazine bumpers just because. Also, from DIP Inc., a slick Picatinny rail with an adjustable rear backup sight and a totally unnecessary but, I hope you will agree, very cool looking vent rib.