Futuristic Olympic Air Rifles Are in a League of their Own 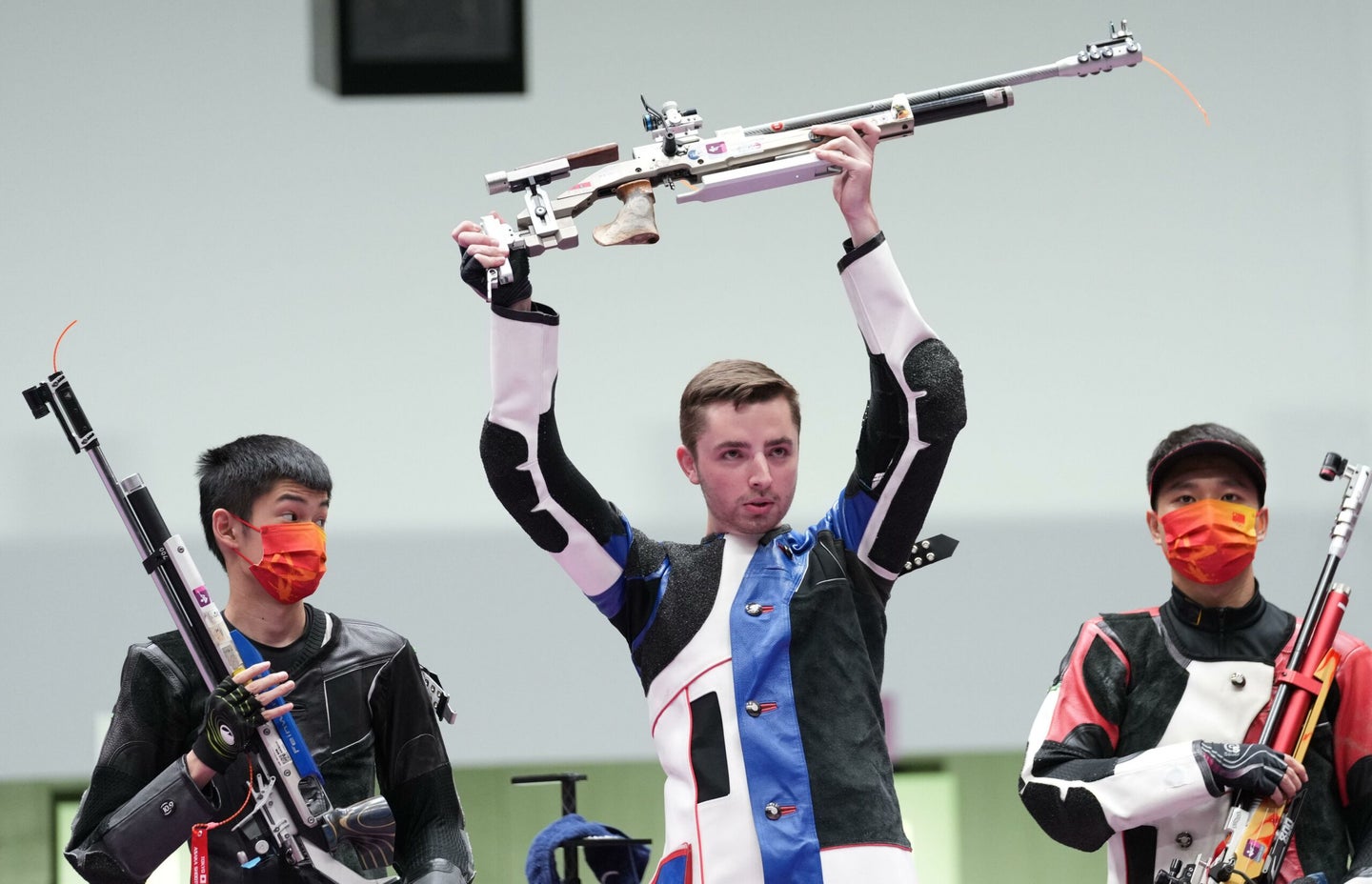 William Shaner of the United States hoists his rifle on the podium after taking gold in the men's 10m air rifle event at the the 2020 Olympics. Ju Huanzong/Xinhua/Alamy Live News
SHARE

This ain’t your childhood air rifle. Not even close. The air rifles at this year’s Olympic Games are a world apart from Ralphie’s coveted Red Ryder from A Christmas Story. The basic fundamentals are still the same—shooting a small caliber projectile with compressed air—but the overall package is completely different.

The 10m Air Rifle Competition involves shooting .177 caliber wadcutter pellets at a target that is 10 meters away. Sure, it sounds like an easy shot, but in this kind of competition, one millimeter can mean the difference between placing 1st and not making the podium at all. To put it all into perspective, the center 10-ring of an Olympic target is half a millimeter in diameter, and some of the best shooters can stack their shots right on top of one another in the same hole.

Because these athletes are competing at the highest level there is, their gear must be built to the highest standards. Most air rifles that average people own are of the “one size fits all” variety. They’re a standard make and model that can be bought right off the shelf at your local store. It used to be a lot like that in the Olympics, too. Every shooter got the same gun so that no one had an equipment advantage. Instead, this ended up placing some shooters at a disadvantage because the rifles didn’t fit them properly.

The Makers and Modifications Behind The New Olympic Air Rifles

These days, Olympic air rifles use pre-charged pneumatics (PCP) to power them and they are highly customizable for shooters of different sizes and setup preferences.

Companies like Feinwerkbau and Walther make some of the rifles that you’ll see Olympic athletes using, and they don’t come cheap. The Model 800 Basic from Feinwerkbau costs around $1,600 as is, and as the name implies, that’s considered a basic, budget model. Once the shooter starts modifying the gun to their specific needs, costs can go up exponentially.

Shooters can fine-tune their rifles down to the last detail. The adjustable buttstocks are customizable in far more precise increments and directions than the average shooter would ever need. And while the rifle shooters cannot custom form the grips to their hands, like pistol shooters can, they are permitted to adjust the cant of the grip and add extra platforms to the foregrip area for more comfortable shooting positions.

The sights are simpler than you might expect, but they, too, can be modified to give shooters an edge. Shooters can add risers and hoods for better sight pictures and even adjust colors to better suit their needs in kinds of light. Extra weights are also an option for obtaining the optimum rifle balance. Some shooters place them at the muzzle while some mount them near the buttstock. Others put them in both places.

Each of these extra add-ons—cheek risers, grip platforms, sight hoods, barrel weights, etc—all add up to create a perfectly tailored rifle for each Olympic shooter. So the next time you think you could outshoot an Olympian with your stock air rifle from the big box store because, hey, 10 meters isn’t that far to hit a target with a BB gun, think again.