In celebration of the centennial, F&S looks at the biggest milestones and greatest innovations of one of the country's most trusted ammo companies 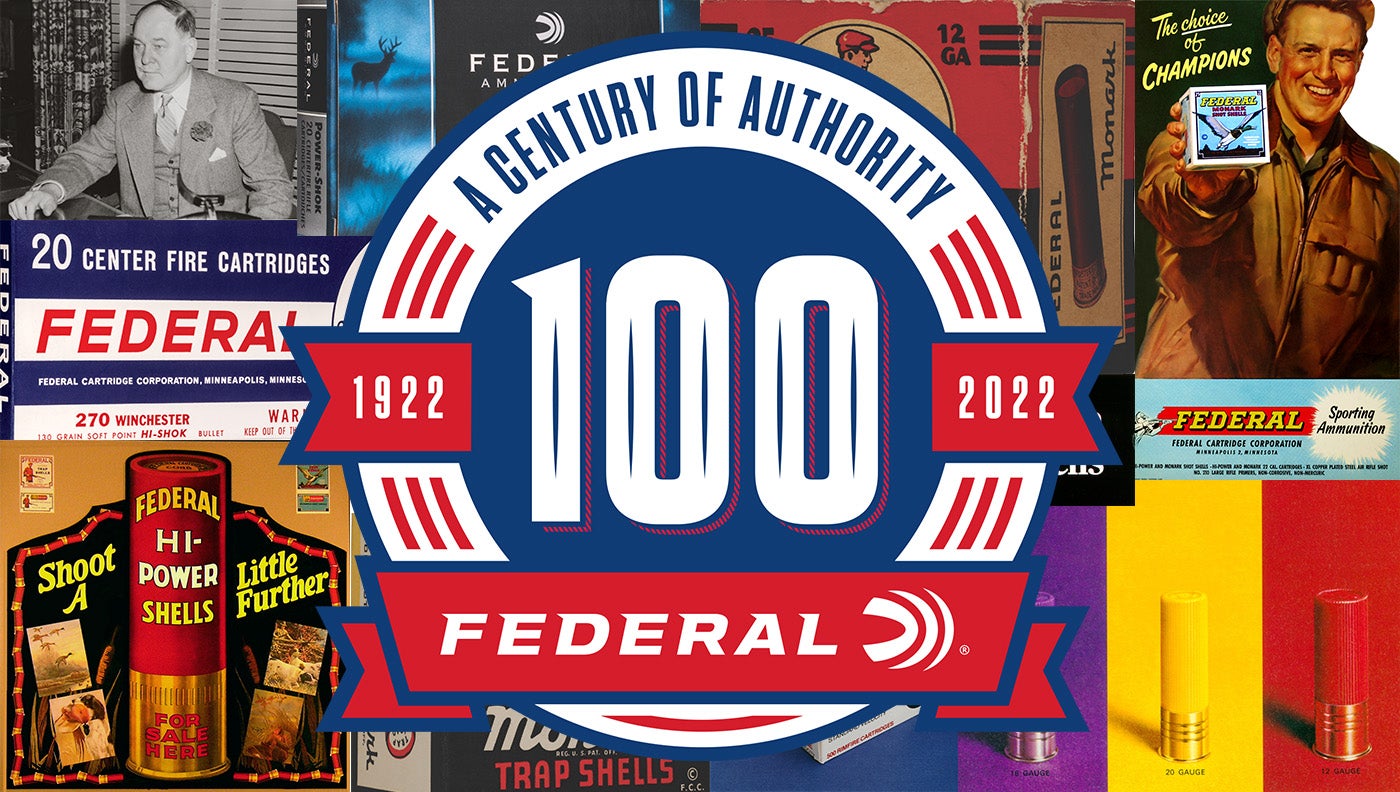 Federal Ammunition turns 100 years old today, April 27, 2022. The company rose from simple beginnings and an early bankruptcy to become one of the Big Three ammo makers, and to contribute mightily to ammunition development, national defense, and to conservation organizations.

As an Upper Midwesterner, I’ve always felt like I had a personal connection with Twin-Cities-based Federal Ammunition. Back when lead was still legal for waterfowl, Federal Duck and Pheasant loads of 1¼ ounces of 5 shot were my go-to shells for everything. Today, Federal’s “blue box” Speed-Shok steel exemplifies what I think of as Minnesota attributes: hard working, value-conscious, cold-weather-friendly. And, while the smell of fresh-fired Gold Medal paper hulls is pure nostalgia, Federal is also a cutting-edge innovator. The gobbler I stoned at nearly 60 yards with one of the first factory TSS loads served as proof, as would untold numbers of ducks, geese, and turkeys downed by 3½-inch shotshells, a Federal invention.

On the centerfire side, my own sample size is limited to exactly one feral hog in California, where circumstances put one of the very first Fusion bullets in the chamber of the borrowed .30/06 in my hands. The pig responded as if struck by lightning, as have countless other big-game animals to countless other Federal centerfire cartridges.

Federal ammunition has been along on some of my most memorable hunts and their hundredth birthday seems like a fitting time to say “thank you” and to wish Federal another hundred years of success.

Here is a look back at some important milestones and innovations during Federal’s rich 100 year history.

Federal Ammunition Milestones from 1922 to 2022

· 1922 — Charles L. Horn, president of BB manufacturer American Ball Company, tries to buy machines to make paper tubes to hold BBs. Instead, he winds up owning the entire idle Federal plant in Anoka, Minnesota, along with another investor. The Federal Cartridge Company is incorporated.

· 1927 — Federal begins loading “house brand” shotshells for Sears & Roebuck, a relationship that would continue until 1971. Sears ammo is sold as  “Sportloads” in the 1930s and as “J.C. Higgins” later on. Federal loads Redhead and Hawthorne ammo for Montgomery Ward and Diktator shells for the Minneapolis-based Our Own Hardware chain. Later Federal will later load ammo for Herter’s and Cabela’s ammunition.

· 1934 — Federal begins its longtime support of 4-H Conservation Club Programs. By 1997, Federal supported 21 different conservation and shooting organizations, including 4-H and the Boy Scouts of America, as well as Pheasants Forever, the NRA, the Izaak Walton League, and others.

· 1941 — Charles Horn contracts with the United States government to build and operate the Twin Cities Ordnance Plant in New Brighton, Minnesota, 16 miles from Anoka. The TCOP will become one of six government-owned, contractor-operated factories that made materials for the U.S. military during the war. Construction on the plant begins in August, 1941, just four months before Pearl Harbor.

· 1941-1945 — The Twin Cities Ordnance Plant produces more than five billion rounds of .30-, .45-, and .50-caliber ammunition before it is deactivated in 1945. Meanwhile the Federal plant in Anoka stops most of its commercial shotshell loading to concentrate on making mortar ignition shells for the British military as well as .22 and shotgun target loads for U.S. military training.

· 1950 — The Twin Cities Ordnance Plant is reactivated for the Korean War.

· 1963 — Federal adds handgun and rifle ammunition to their catalogue for the first time.

· 1989 — To make steel shot more effective, Federal and Mossberg collaborate on the development of the 3½-inch 12 gauge cartridge and the Model 835 Ulti-Mag, the first gun chambered for 3½-inch shells.

· 1993 — Exhibition shooter Tom Knapp, a longtime Benelli and Federal brand ambassador, sets a record by throwing nine clay targets in the air and breaking all of them before they can hit the ground.

· 2018 — Federal begins selling factory-loaded TSS shotshells, including .410, redefining what a turkey load, and a turkey gun, can be. Federal also introduces the .224 Valkyrie, a flat-shooting, long-range cartridge designed for the AR 15 platform in this year.