8 Gun-Cleaning Mistakes That Can Ruin Your Firearms 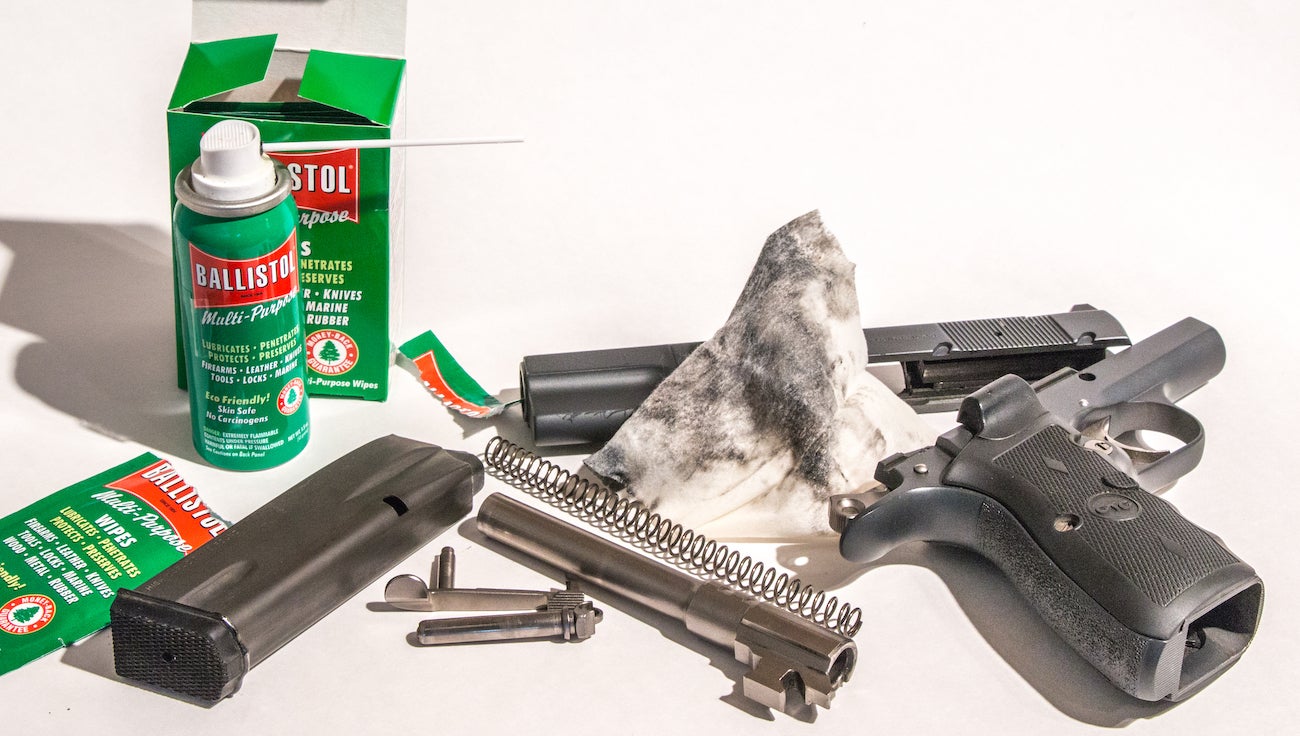 If you don’t follow the correct procedures or use the wrong cleaning tools, oils, and solvents, you can damage your firearm. Richard Mann
SHARE

If you own a firearm, you are the one who is responsible for its maintenance, and that includes cleaning. Unfortunately, some folks cause more damage to a firearm when cleaning it than they do when using it. Here are eight mistakes to avoid when cleaning guns. Each of these blunders can lead to serious problems down the road.

1) Failure to Unload Your Gun Before Cleaning

This is the worst mistake you can make when cleaning a gun. I can’t imagine that I need to explain why, but some folks are a bit daft, so let me see how simple I can make it. Before attempting to perform any maintenance on any firearm, unload the damned thing and put the ammo far, far, away. If you attempt to clean a gun that is loaded, the chances of you putting a hole in something you do not want a hole in are very high. This could be your roof, your floor, a family member, or you.

2) Neglecting to Clean the Internal Components of a Firearm

Wiping a gun down with an oily rag is a good thing and should never be discouraged. But for some, that’s the extent of the cleaning they perform. Admittedly, the bores of guns are probably cleaned a lot more than needed—some shooters do this every time they shoot a gun, and it’s not necessary—but there are other internal parts that need attention. Making sure all internal moving parts are free of carbon, corrosion, and rust is critical to the firearm remaining in safe, properly-functioning order. It’s also good to check that all screws—inside and outside—are tight whenever you break a gun down for cleaning. Failure to maintain the internal workings of your gun can lead to malfunctions and in some cases make the firing mechanism unsafe.

3) Not Using a Bore Guide

A bore guide is a plastic device that is slipped into the chamber of a firearm—generally a rifle—that protects the chamber from scratches and damage that could be caused by a cleaning rod. A bore guide is not an absolute necessity, but it does remind you to stick the rod into the breach end. With some guns—like lever actions and some semi-autos—this is hard to do and it’s why several companies make pull-through bore cleaning devices. Never push a cleaning rod through the barrel of a gun from the muzzle end. If you do, you could damage the muzzle’s crown, which can adversely affect accuracy.

4) Not Drying the Bore

Some believe it’s a good idea to heavily lubricate the bore of a gun. After all, that’s where all the friction is happening, right? If you’re storing a gun for an extended period of time, it’s OK to have excessive oil or grease in the bore. (Some suggest storing well-oiled guns muzzle down to keep oil from seeping into and darkening wood stocks.) But, before you shoot it, you better dry it out. A friend of mine had an old but beautiful Savage 99 that shot exceptionally. However, he left way too much oil in the bore and fired the rifle. This resulted in a slight bulge in the barrel about three-quarters of the way down. The rifle never shot well again. Clean the barrel and oil the barrel, but make sure to dry it before shooting. It’s always a good idea to run a dry patch down the barrel of any gun before firing it.

5) Lack of Knowledge of How Your Gun Works

To clean the internal components of a gun that make it work, you have to take the gun apart. In many instances, a simple fieldstrip gets you as deep as you need to go. But with some firearms, further disassembly is necessary. From a mechanical standpoint, some guns are pretty simple, others are not. When you decide to do that deep clean, make sure you have the knowledge to get your gun apart and back together. Otherwise, an embarrassing trip to the gunsmith is in your future.

Before you clean your firearm, you should unload it, and the ammo should be put away—far away. But, when you put the ammo away, don’t put the magazine away with it. Magazines are an integral part of a firearm. With many semi-automatics, they are a leading cause of malfunctions when they’re not working properly. Magazines need to be clean and in good working order. But some shooters don’t even realize they can disassemble their gun’s magazine. When you clean a firearm, take all the magazines for that firearm apart, fully clean them, and put them back together. Don’t use a lot of lubrication because when magazines are ejected to the ground, excessive oil can collect dust and dirt. That crud can then transfer to the ammo, which will ultimately end up in your gun.

There are a host of solvents and oils available for gun cleaning. They’ve been specifically formulated for that purpose. Don’t try to save a few bucks by using a homemade concoction or gasoline. Yes, believe it or not, that and worse happens—just ask your gunsmith. Use solvents and oils designed for guns. But even then, be careful. Some solvents are not compatible with some finishes and polymers. Lots of modern guns have lots of plastic parts. Read the label and make sure the oil or solvent you’re using won’t dissolve your gun.

Read Next: 6 Rules About Barrel Life (And Burnout)

8) Not Having Enough Cloth To Clean Your Guns

You can’t have too many rags or patches when it comes to cleaning guns. For your health and sanity, avoid dishtowels or bathroom washcloths. Also, avoid using cotton t-shirts for bore patches, they are not thick enough, and you’ll do a lot of cutting—patches are sold in packs of a thousand for a reason. You should also pick up some cotton rags you can dedicate to gun cleaning, and make sure one is large enough to at least cover the kitchen table. One-time use of a kitchen or bathroom towel might put you on the couch. Continuing this practice can be a precursor to divorce.