Learning to trip the trigger without moving the gun is hard. To master it, you have to forget about aiming at first 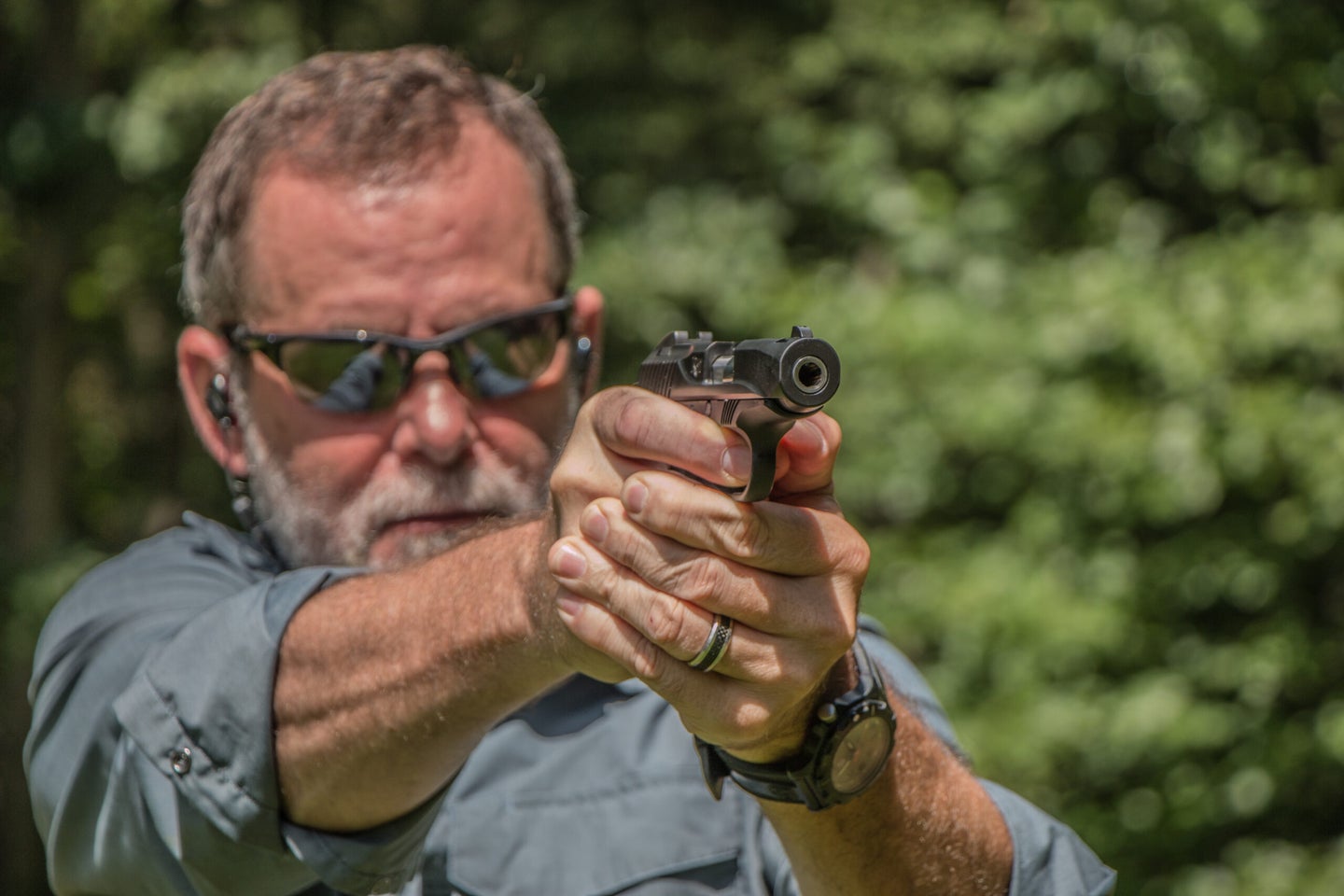 When it comes to accurately shooting a defensive handgun—or any gun for that matter—any good firearms instructor will tell you that it’s all about keeping the sights aligned on the target while you’re pressing the trigger. That is the essence marksmanship. Your stance, grip, and breath control can influence the sight and trigger press relationship, but they are secondary in importance. If you can maintain a proper sight picture while pressing the trigger, your stance, grip, and breathing don’t matter.

Aiming is Overrated for Handgun Practice

Learning to do this correctly is often thought of as a 50/50 proposition—that both parts, the sight picture and the trigger press, require equal attention and practice to master. They don’t. Far from it.

The fact is, you can learn to properly align the sights and place them on the target in a matter of minutes. You can look at a simple illustration and remember it for the rest of your life. It is the single easiest thing to learn about shooting. On the other hand, teaching someone to pull a trigger correctly is extremely difficult.

Tripping a Handgun Trigger Correctly is the Hard Part

The explanation of the proper technique is easy: You press the trigger through its entire range of motion without moving the gun. Why, then, is it such a difficult task to learn? Because, typically, you’re thinking about aiming at the same time. In a way, it’s like trying to pat your head and rub your belly simultaneously.

So, when you’re trying to learn the proper trigger press, forget aiming. Pressing a trigger without moving the handgun takes lots of practice. The worst thing you can do is make that practice more difficult than it has to be.

The Secret is to Forget Aiming and Just Shoot

You need to take a different approach. If I ask you to point a handgun at a target, you could easily do it without referencing the sights. It’s no different than pointing with your finger. Now, with your handgun pointed towards the target, concentrate on pressing the trigger without moving the handgun. Suddenly, the process becomes much easier because instead of trying to keep the gun still and trying to keep the sights aligned on a certain spot, all you have to do now is concentrate on the gun’s movement as you press the trigger.

Eventually—when shooting for real instead of practicing—you will need to divide your concentration between sight alignment and trigger control. But you can’t do that until you learn how to do the latter. So separate it out for now.

Practice dry firing your defensive handgun until you have mastered the trigger press and can do it without causing movement to the handgun. Once you’ve got that down, then you can begin to combine the trigger press with the proper sight picture. Don’t forget, however, that since you can’t hold the handgun perfectly still, some wobble is acceptable. At common defensive handgun ranges, as long as you keep the front sight on target and inside the rear sight notch, with a good trigger press your bullet will hit very close to your point of aim.