The Most Influential Rifle Cartridges Ever Made 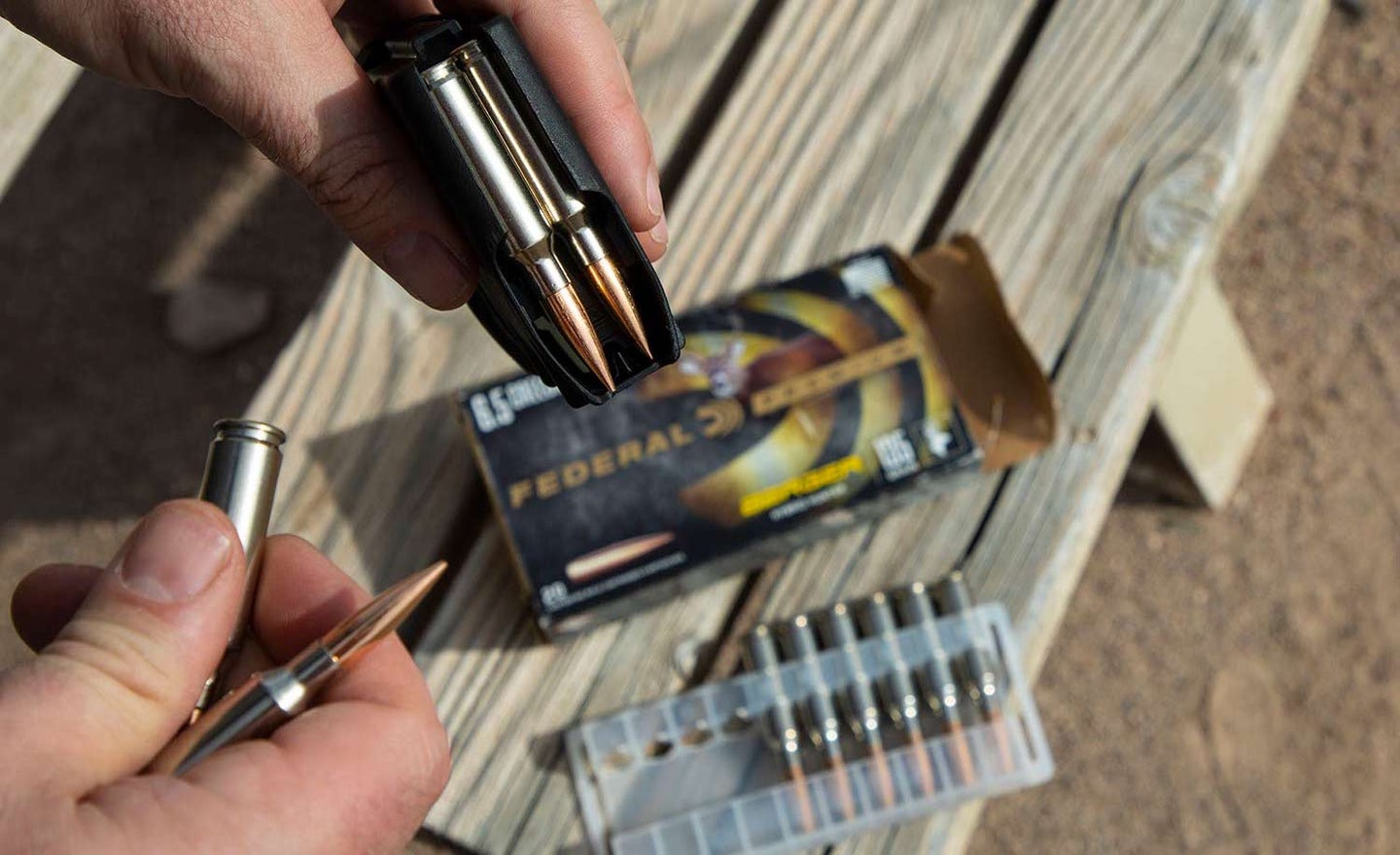 Since the invention of the modern cartridge in 1846, we’ve seen an uncountable number of them come and go. Most have evolved out of the need to sell something new to the shooting public. A few proved to be genuinely useful. The most influential rifle cartridges—five in all—have altered the course of firearms development.

The London gunmaker Holland & Holland takes credit for this one. At the beginning of the 20th century, Africa was the home of what seemed an inexhaustible supply of big game, and there was no shortage of people who were happy to hunt it. Prior to 1905, this could safely be done only with British-made double rifles, which were heavy, recoiled brutally, and fired ruinously expensive ammunition. But in that year, Mauser introduced the 9.3×62 cartridge chambered in the Model 98 bolt-action rifle. The cartridge turned out to be one of the best all-around loads for Africa ever devised. The rifle was dead reliable, far lighter than a double, and had a fraction of the recoil and cost.

Mauser’s rifle and cartridge were a sensation and took much profit from H&H. Holland & Holland determined to go them one better, and the cartridge they came up with was a stroke of genius. It was a long, heavily tapered case with a belt around the base. It was loaded with bullets that came in 235-, 270-, and 300-grain weights. The case was designed to accommodate Cordite, an early form of smokeless gunpowder that resembles unboiled spaghetti, and you could stuff it most easily into a case with a lot of taper. However, the almost nonexistent shoulder made headspacing nearly impossible, so H&H created a brass belt that headspaced on the rear of the chamber.

At the end of World War I, H&H released the cartridge for general sale, and it was a sensation. Then, and now, it is the most useful all-around rifle you can take to Africa. Alaskan guides swear by it. And the .375 H&H is probably the basis for more new cartridges than any other case design. I think that the number of rounds based on it is something like 60. After the .375 H&H, the world of rifles was never the same.

Designed by Charles Newton (the Roy Weatherby of his time) for the Savage Model 99 lever-action, this modest, unassuming round was responsible for the high-velocity craze that began with its introduction, reached its full fury in the 1950s, and has not entirely receded.

At the time, the United States was firmly in the grip of the lever action (The bolt would not achieve dominance until after World War I.) and the Model 99 was the most advanced, by miles, of all lever guns.

Newton’s cartridge was based on the .30/06, much-shortened, and much necked down. It fired a 100-grain bullet at 2,850 fps, but Savage said no, we want 3,000 fps, and so Newton, against his better judgment*, gave them 87 grains at 3,000 fps, and that number was pure magic. At a time when the .30/30 was considered a high-velocity round, the .250/3000 was something from another dimension. Hunting magazines were filled with stories of incredible kills at fantastic ranges by people with Savage 99s chambered in the miraculous new caliber. Most of these tales were fantasy, but who cared? The high-velocity craze had begun.

*(Newton believed correctly that with the bullets available at the time, 87 grains was not enough to take big game reliably. Today, with modern 100-grain slugs at 2,800 fps, the .250 is a wonderful whitetail load. Larry Koller, who was the finest whitetail hunter I ever knew, favored it above all else. And a rotary-magazine Model 99 in that caliber is a jewel.)

In the early 1940s, the German Heer (army) asked itself why, if nearly all infantry engagements took place between 220 and 250 meters and volume of fire was of far greater importance than accuracy, it was equipping its soldiers with slow-firing bolt-actions designed to be effective at 500 meters. Not having an answer, it gave the job of creating something more lethal than the 98 Mauser to designer Hugo Schmeisser. What Herr Schmeisser came up with was the StG 44, the first successful assault rifle. Its full name is Sturmgewehr (assault rifle) model of 1944, a title supposedly conferred by Hitler himself. The rifle was heavy, made mostly of stamped parts, and could be fired semi or full-auto.

It was chambered for a revolutionary cartridge, the 7.92×33 Kurz (short). The new round fired a 125-grain bullet at 2,200 fps. Because of its minimal kick and the 11-pound weight and straight-line recoil of the StG 44, it was accurate out to 300 meters even on full auto, giving Landsers (infantry) the firepower of a conventional submachine gun but with more than treble the range. Nothing like the StG-44 had been seen before on a battlefield. Fortunately for the Allies, Germany did not have the production facilities to get the gun into general distribution.

However, StGs did find their way to the shop of Mikhail Kalashnikov who, after World War II, was designing an assault rifle for the Soviet Army. As its basis, he stuck with Russia’s 7.62×39 cartridge, which was introduced in 1943 and had been inspired by the Kurz. Kalashnikov’s new rifle was the AK-47, which is the most-produced and most successful military rifle in history, and the most recognizable machine of any kind in the world.

The brainchild of Remington designer Merle (Mike) Walker, the .222 was an original concept not based on an existing cartridge. It was the first rimless .224 round made in the United States, and in its basic configuration, fired 50-grain bullets at 3,200 fps. Walker was one of the founding fathers of benchrest shooting, and his creation was, above all things, accurate. From its introduction and for several decades thereafter, if you saw a group that caused you to wet yourself, odds are it was printed by a .222. Introduced in the Model 722 rifle, which was cheap, ugly, and highly accurate, the Triple Deuce was a huge commercial success and, in the hands of benchrest shooters, spearheaded the drive toward the unbelievably accurate rifles that we take for granted today.

But the story doesn’t end there. The .222 was followed in 1958 by the slightly larger .222 Remington Magnum, which added 5 grains of bullet weight and 100 fps of velocity. It caught the interest of the U.S. Army, which was looking for a round for the AR-15, the successor to the M-14. Army Ordnance kept the ballistics of the .222 Magnum, but the case they opted for differed in shape. The result is known as the 5.56mm NATO, or .223, and its success was so immense that it killed off both the .222 and the .222 Magnum in short order. The adoption of a .224-caliber round as a main infantry cartridge is as radical an innovation as we’ve seen since 1906 and the debut of the .30/06, but history has proved it was the way to go. And it all started with Mike Walker’s benchrest round.

In just under 60 years of covering guns, I’ve never seen anything like the Creedmoor phenomenon. If ever there was an unlikelier candidate for its wild success, I can’t imagine what it might be.

Based on the .30 Thompson Center case, the Creedmoor fires a 140-grain bullet at 2,800 fps. Its bullet diameter, 6.5mm (.264) had been a commercial failure in the United States for a century. The cartridge doesn’t offer screaming velocity.  It’s named after a once-famous rifle range that has not existed for a long time. It was not designed for hunting, but for long-range target shooting, at which comparatively few people compete because it’s both difficult and expensive. After making its debut, it sat around for a number of years with no one paying much attention…and then it simply exploded.

All of a sudden, everyone had to have a 6.5CM. I think it may represent a kind of maturing of the American shooter. It came along at the same time as the craze for long-range hunting, and for as long as I can remember, to hit something at long range, you put a heavy bullet in a cartridge of at least .30 caliber, stuffed a monstrous load of powder behind it, and ignored the fact that the recoil caused you to bleed from the eyes when you pulled the trigger.

But if you’re armed with a Creedmoor, you don’t need to incur detached retinas and slipped discs. Take a bullet of adequate weight with a B.C. in the upper 400s or better, propel it at reasonable, not high, velocity, employ the fantastic accuracy of factory drop charts, laser rangefinders, and range-compensating scopes, and you’ll get the job done. This is a sea change in shooting, nothing less, and at the crest of the leading wave is the mild-mannered but mighty 6.5 Creedmoor.