F&S Classics: The Rifle That Made America

It was born as the homely jaeger rifle, but it evolved into the graceful Kentucky, and its accuracy helped shape our country's destiny 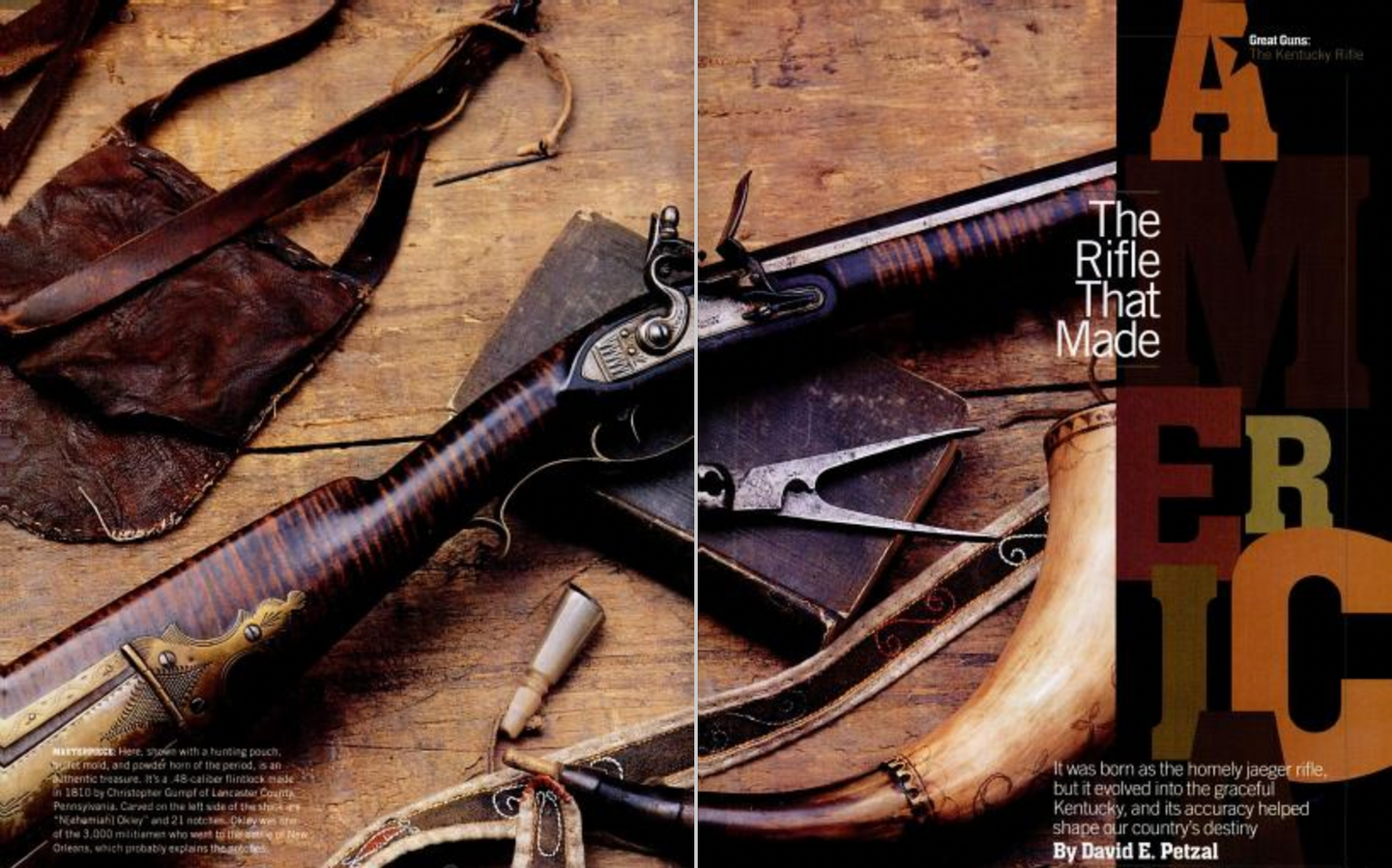 "The Gun That Made America" was published in May 2003. Field & Stream
SHARE

In colonial American, it was man’s most important possession, and it could cost a year’s wages or more. It was built to kill, but it was made to be beautiful as well as lethal. It was a hunting rifle, but it put many a British officer in an American grave.

It was perfected in Pennsylvania, but it was brought to fame by men like Daniel Boone, and so the world knows it as the Kentucky rifle.

The Kentucky rifle was not the original product of American genius. Its direct ancestor was the European jaeger (hunter) rifle, probably the first firearm that could be aimed at a distant target and hit it. The jaeger was the creation of Central European gunsmiths: a flintlock with a heavy, octagonal, rifled barrel of .60 to .75 caliber; a set (double) trigger; and a walnut stock equipped with a distinctive “trap” in the side that was covered by a sliding plate. Its sights were crude—an open rear V and a front blade—but it could shoot accurately. Marksmen competed at distances of 200 and 300 yards—fantastic ranges in the era of the smoothbore musket.

All jaegers were finely made, and some were decorated, but graceful they were not. Their short (24- to 30-inch), heavy barrels and thick stocks robbed them of that quality.

In the 17th century, gunsmiths from Central Europe emigrated to the colony of Pennsylvania, and in their shops the jaeger began to evolve into a much smaller-calibered rifle. The force behind this change was economics. In the New World, powder and lead were more expensive than in Europe. A frontiersman could cast far more .40- or .45-caliber balls than .60- or .75-caliber balls from a pound of lead.

The smaller bullets required less powder to propel them, and gunsmiths found they could make maximum use of the lighter charges if they made the barrels longer. Short, heavy octagonal barrels gave way to slimmer, round barrels of 42 to 46 inches. This gave the rifles a muzzle-heavy feel that made for steady offhand shooting and also increased their sight radius, which lessened aiming error.

At the same time, the stock evolved from the clubby jaeger silhouette to a distinctive slender shape. Walnut was dropped in favor of curly maple that was usually stained to highlight its figure.

The jaeger’s patch box was retained, but the simple sliding wood cover was replaced by a hinged one, usually of brass, and patch boxes became highly ornate—an art form in themselves.

The very first Kentucky rifles appeared about 1710, and were comparatively plain guns. A typical example was .45 caliber and had a 44-inch barrel, a double-set trigger, a low silverblade front sight, and a fixed open rear. It weighed between 8 and 9 pounds and had a maple stock with a patch box. But then Kentuckies became fancier, leading to their “golden age,” which lasted roughly from 1770 until 1830.

A Kentucky rifle of this period was as much an artistic endeavor as it was a firearm. The stock terminated in a crescentshaped brass buttplate. An elaborate brass patch box highlighted the right side of the stock; an ornately carved cheekpiece, the left. The remaining wood surfaces would be carved in scrolls, horse heads, hearts, or stars, and inlaid with silver or brass.

How Good Were They?

By today’s standards, Kentucky rifles were slow firing. A competent marksman could get off two aimed shots a minute, three if he were truly in a hurry. But Kentuckies were accurate. Given the limitations of open sights, the men who used them could do extraordinary things. According to The Great Guns by Harold L. Peterson and Robert Elman:

“The very sports that Kentucky shooters enjoyed show that they expected their rifles to shoot very well. One of the most popular of these contests was the turkey shoot. In this competition a turkey was tethered behind a log, and the shooters in turn attempted to make the bird show its head for a quick shot. The man who succeeded in hitting this small and fast-moving target won the bird for his supper. This game required…excellent accuracy, especially when one considers that ranges varied from an impressive 250 feet for offhand firing to an astounding 350 feet when rests were used.”

The End of the Long Rifle

By about 1830, the long rifle began to change. Percussion ignition replaced flintlocks. Stocks became straighter, robbing the rifle of its graceful curves, and plain maple or walnut replaced the traditional curly maple. Decoration increased to the point of gaudiness and then largely disappeared. Barrels grew shorter, and calibers decreased. The guns would still shoot well, but they were not Kentucky rifles anymore.

The time of the Kentucky had passed because the next generation of frontiersmen had pushed beyond the Mississippi, where the game was bigger. These new explorers—mountain men—carried the plains rifle, a heavier, stronger, and far more powerful arm.

But the rifle of Davy Crockett and Daniel Boone lives on. Today, gunsmiths are building replicas that are as fine as any of the originals, and some of the originals carry high price tags. A golden-age Kentucky that has survived in good condition can command $50,000 or more.

There will never again be anything quite like the Kentucky rifle, and that is perhaps why it endures—half firearm, half work of art.