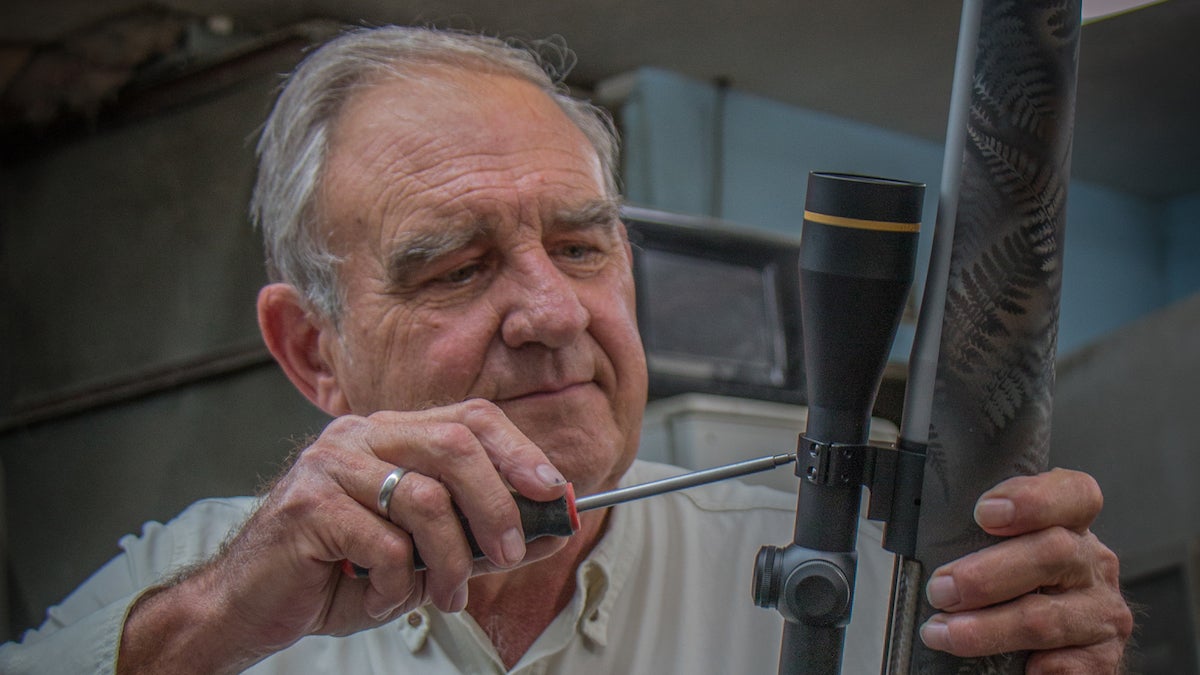 Melvin Forbes and his Model 20—what some have called the pound-for-pound best shooting bolt-action rifle ever made. Richard Mann
SHARE

Late last year I called Melvin Forbes at New Ultra Light Arms (NULA) and placed an order for a rifle. I told Melvin, jokingly, “You’re getting old. I want another one before you’re too old to work your magic.” In April of 2022, I drove across West Virginia to pick up my new rifle and to visit with my good friend. We ate hot dogs, told stories, and made plans for next deer season. That’s when I learned Forbes had finally worked out the details and would be passing New Ultra Light Arms to Bill Wilson of Wilson Combat.

Because Forbes doesn’t advertise, and because almost 75 percent of his customers are return customers, you may have never heard of NULA. In 1985, Forbes introduced a sub-5-pound bolt-action called the Model 20 that handled like a samurai sword and shot like a benchrest rifle. He started with a front guard screw, knowing that for optimum balance, every ounce he added behind it he had to add in front of it. He designed his own action and completely revolutionized the way rifle stocks are made and fit.

What Makes a NULA Rifle Different

Working with engineers at the Allegheny Ballistics Laboratory, Forbes learned how to make a rifle stock by hand using Kevlar and carbon fiber. The result was a stock that’s stiffer than the rifle’s barrel, and weighs only 8 ounces when it comes out of the mold. Then, against all conventional wisdom, Forbes bedded his action in this stock from the tang all the way to the tip of the forend.

Because the stock is stiffer than the barreled action, there’s no need for the barrel to be free-floated. The stock essentially makes the barrel stiffer, tremendously reduces vibrations, and dampens harmonics. The result is an uncanny level of precision some builders struggle to achieve with rifles that weigh—and cost—twice as much. Forbes also worked with Timney Triggers to design a trigger with a bolt-locking, three-function/two-position safety. And he designed his own two-ounce scope rings, which are now made by Talley Manufacturing.

With the Model 20, Forbes set the standard for the lightweight bolt action. He set it so high no one else has been able to reach it in more than 35 years, and his work was so ingenious he was awarded the Golden Bullseye Pioneer Award by the National Rifle Association. Field & Stream’s rifles editor, David E. Petzal once called Forbes the most mechanically apt human being he’s ever met.

Forbes Tried To Sell NULA in The Past

Any good machinist can create an action and screw a barrel on straight. But the key to Forbes’s rifles performing the way they do is the intricately hand-laid stocks. To mold them correctly, it takes time and patience, but more than anything else, it takes skill. It’s why Forbes has had a hard time finding in anyone else but himself and a small group of stock makers to make his rifles the right way.

In 1999, Colt purchased NULA but they dropped the ball, and Forbes had to buy his company back. Then in 2012, defense contractor Titan Machine convinced Forbes they could manage NULA. They started off well but stopped listening to Forbes. So, Forbes stepped away and the company Titan had started—Forbes Rifles—folded. The problem with both business endeavors was twofold. These large companies were more interested in maximining profits than building Forbes’s rifle correctly, and they refused to heed the advice of the rifle’s creator.

The truth is Forbes never needed a big company to buy him out. What he needed was another firearms innovator with an appreciation for the magic he’d created. Someone he could share his rifle-building secrets with and who respected his legacy.

Why Wilson Combat Could Be the Best Fit For NULA

Through a mutual acquaintance, Forbes began talking with Bill Wilson. In Wilson, Forbes found a collaborator, successor, and the guardian his rifle needed. Wilson Combat is the largest and most successful custom firearms manufacturing company in the world. They’ve mastered the 1911 and the AR15. Above all else, Forbes and Wilson respect each other and speak the same language when it comes to firearms.

“I have all the faith in the world in Bill Wilson, and this is a project whose time has come,” says Forbes. “I’m genuinely pleased that future generations will be able to enjoy the same rifle I’ve been building, and that thousands of others have enjoyed, for almost 40 years.”

Melvin and his team will continue to service rifles that were made by Colt—the Colt Light Rifle—Forbes Rifles, and the pre-Wilson Combat rifles of New Ultra Light Arms. But now he will show the new caretakers of his rifle how to build the pound-for-pound, most accurate hunting rifle ever constructed. Initially, Wilson Combat will offer the Model 20S in .223 Remington (Wylde), 300 HAMR, and 350 Legend, and the Model 20 in .243 Winchester, 6.5 Creedmoor, 7mm-08 Remington, .284 Winchester, and .308 Winchester.

Read Next: The 50 Best Guns Ever Made

“I feel so fortunate to know Melvin and to have been entrusted with the opportunity to continue his legacy of building the finest and lightest bolt rifles on the market,” Wilson says. “I’m also deeply humbled and honored that Melvin has put his trust in me and my team at Wilson Combat to continue his life’s work. He is basically turning his baby over to us, and I assure him and all the past and future customers we won’t let any of you down.”

From knowing and hunting with both Forbes and Wilson, I believe NULA and Forbes’s legacy are in the most capable hands possible.