The Mossberg 940 Pro may be a bit heavy for some shooters, but it's a reliable and versatile gun that'll perform in the harshest hunting conditions 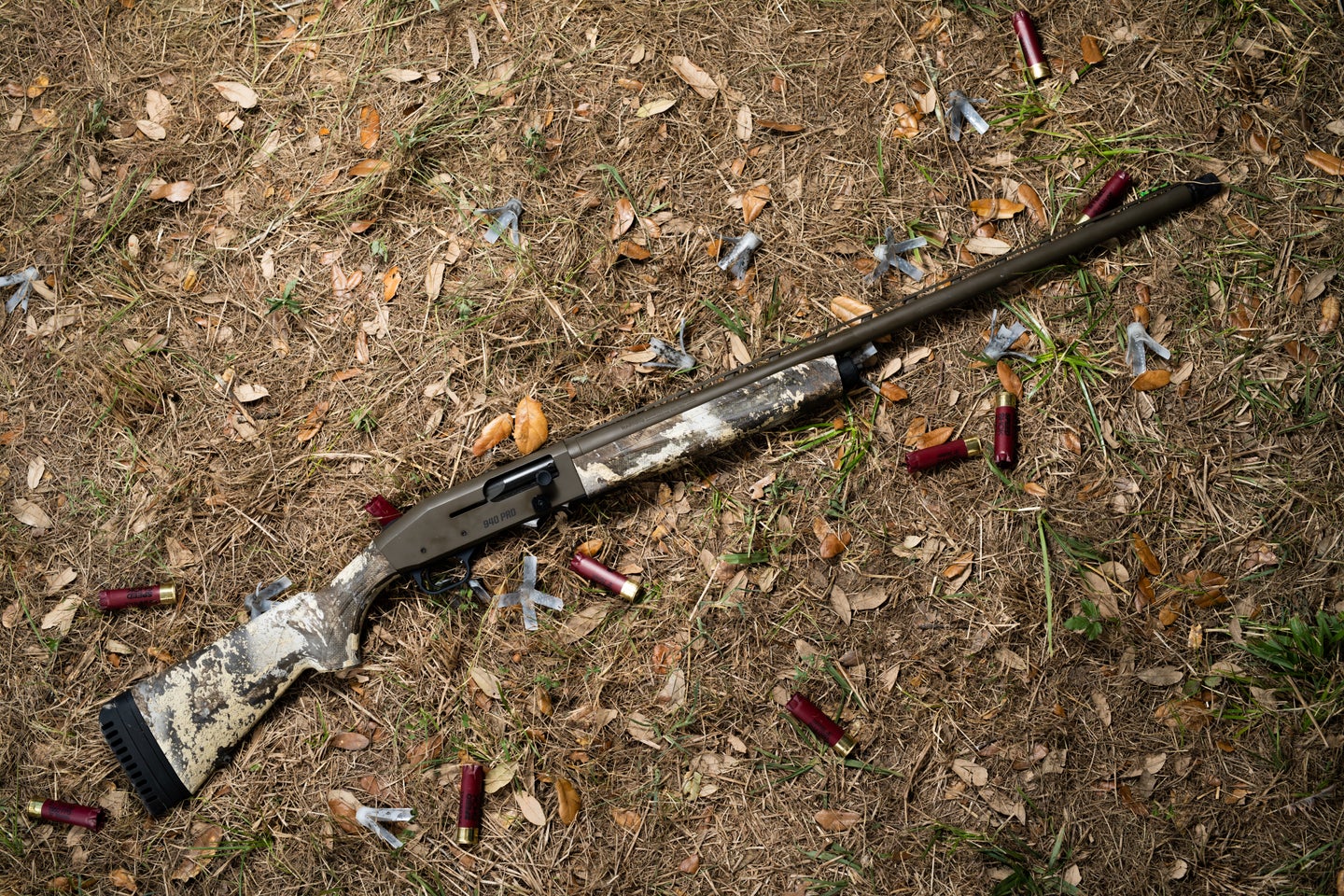 We blasted clays and teal with the Mossberg 940 Pro in Texas last fall. Stephen Maturen
SHARE

Mossberg’s long-time motto, “More gun for the money,” clearly guided the development of the 940 Pro Waterfowl semiauto. By packing the 930 platform with features designed to improve its reliability, Mossberg offers a gun to compete with semiautos costing much more. Improved gas system parts and boron-nitride coatings improve the gun’s reliability and extend the time it’s able to run between cleanings.

Mossberg had tried making gas semiautos without much success until 2004, when the 935 appeared. A robust 3 ½-inch 12 gauge, the 935 was made to be a value at the expense of versatility: It was intended for 3- and 3 ½-inch shells only. Mossberg needed another gun to fill out the line, and the 930, which was a 3-inch version of the 935 made for 2 ¾- and 3-inch shells, joined the lineup the following year. Like the 935, the 930 shared the top safety typical of Mossberg shotguns, and it had several plastic parts to save costs, which is common among many shotguns now but was less common in the early 2000s.

The 930, like many lower-priced semiautos, has its fans and its detractors. Which camp a 930 owner falls into depends on their personal experience with the gun. Some never had a problem and loved it; others, not so much. In 2020, Mossberg worked with pro shooter Jerry Miculek to build an improved gun that could withstand the rigors of 3-gun competitions. The 930 had already found some acceptance in the 3-gun world, and, in fact, Mossberg had already introduced a Jerry Miculek 930 Pro. The company made enough changes to the 930 to merit a whole new name, and the 940 was born. The first 940 was the JM Pro, a dedicated race gun. Recognizing that waterfowlers, too, would appreciate the improvements in reliability found in the 940 JM Pro, Mossberg added a 940 Pro Waterfowl and Pro Snow Goose. Currently, the 940 lineup comprises the JM Pro, the Pro Waterfowl, Pro Field. Pro Snow Goose, Pro Turkey and Pro Tactical.

Nut and Bolts on the Mossberg 940 Pro Waterfowl

Specs on the Mossberg 940 Pro Waterfowl

When the 935 first came out, a friend who worked for Mossberg told me they had looked at many competing gas semiautos as they designed the gun, especially the Winchester Super X2. The similarities between the 930/935 and the Super X series are mostly evident in the composite spacer tube that serves as the link between the gas piston and the bolt. And, the most obvious difference between the 930 and 940 is that tube. On the 940, the old plastic tube has been replaced by a lighter-weight, vented anodized tube. The vents in the tube allow gases to escape instead of funneling them back into the action where they can cause fouling to build up. The result is a gun that stays cleaner and runs better and longer. In addition, several internal parts (the gas piston, magazine tube, hammer sear, return spring tube) are boron-nitride coated to prevent corrosion and the return spring is stainless steel. There’s also an anodized magazine spring follower for smoother feeding, and there are drain holes in the stock so that if water does get in, it can get back out without rusting the recoil spring tube.

On the outside, the gun has Cerakote on all metal surfaces to resist rust and abrasion. The camo synthetic stock has removable spacers on the butt to allow length-of-pull adjustment, and stock spacers allow some adjustment of drop and cast. The 28-inch barrel comes with extended choke tubes and a fiber-optic bead. And, to make the gun easier to handle with cold, wet or gloved hands, it has an enlarged bolt handle and release.

How We Tested the Mossberg 940 Pro Waterfowl

The 940 Pro Waterfowl was among the guns we tested during the September teal season at Pintail Hunting Club in Texas last fall. We handed guns off as best we could in the mornings as teal swarmed our decoys. In the afternoons we shot all the guns as much as possible at Pintail’s clay range. We also tested each gun for point of impact, and we pattern tested them with hunting loads, too—specifically Federal  1 1/8-ounce, 1550-fps loads of 2 shot, a very popular duck load. We also weighed the gun and tested its trigger pull with a digital gauge. We weighed the gun at 7 ¾ pounds with a 5 ¾-pound trigger pull. The 940 Pro Waterfowl was flat-shooting, with a 50/50 point of impact. With a Modified choke in place, it shot a 75-percent pattern at 35 yards.

How the Mossberg 940 Pro Performed

As a fairly heavy gas operated semiautomatic, the 940 Pro Waterfowl does a good job of tamping down felt recoil. The gun cycled well for us, too, working with light target loads as well as 3-inch duck loads. The oversize bolt handle and closer button and the enlarged loading port make the gun easy to load and unload. The 940 does have a distinctly muzzle heavy feel. It’s the kind of gun that doesn’t feel great when you pick it up in the store, but the weight helps make it steady-pointing and smooth-swinging in the field. The 940 stock has enough drop and a thin comb that fits a variety of people and the shims spacers make still it more adaptable.

With its olive Cerakote metal and TruTimber camo stock and forend, the 940 Pro Waterfowl looks every bit like the duck gun that it is. It has the look of a solid workhorse, and while Mossberg has made the transition between the forend and the receiver flush in an improvement over the 930, the 940 still lacks the sleek lines or perfect fit and finish of a higher-end competitor like a Browning Maxus II. At half the price, how could it? The plastic piece that prevents the forend from wiggling looks cheap, as does the plastic safety. It is worth noting that one of the great pluses of a Mossberg is that there are a ton of aftermarket parts available, including some slick, user-installable tactical safeties so you can solve that part of the problem inexpensively.

As a 3-inch gas semiauto that can handle a variety of 2 ¾ target and hunting loads, the 940 Pro Waterfowl can serve a number of different functions. With its near-8 pound weight, it would make a solid gun for sporting clays, where that weight helps absorb recoil and smooth your swing while the improved gas system should help keep it shooting. Likewise it would be a good gun for doves, and the drilled, tapped receiver means you could mount a scope or red dot for turkeys or predators. You could add a magazine extension for snow geese, home defense or 3-gun competition. It would be a heavy gun for carrying in the uplands.

We experienced no failures of any kind with the 940 Pro Waterfowl. It cycled 3-inch hunting loads and 2 3/4- inch target loads with equal reliability. Now that Mossberg has added the new vented spacer tube they claim the gun can go 1500 rounds between cleanings if need be. We didn’t get a chance to put 1500 rounds through it without cleaning, but the gun did shoot several hundred rounds for us without cleaning and without a problem. The boron-nitride coating internal parts, the anodized follower and the stainless return spring as well as the Cerakote finish, should all help this gun withstand the tough environments where waterfowlers chase ducks and geese.

At $1,092, the 940 Pro Waterfowl sells for hundreds of dollars less than 3-inch semiautos from Beretta, Browning and Benelli and is priced much closer to guns like the Super X4 or Beretta A300, yet it has corrosion-resistant features those guns lack. The 940 Pro Waterfowl’s improved reliability make it a very good value in waterfowl gun that can pull double duty as a target, turkey, and dove gun as well. The Pro Waterfowl does cost $300 more than a camo waterfowl model of the 930, but for your extra $300 you get improved cycling, more weather-resistant features, an adjustable-length stock and enlarged bolt handle and release button, which is a lot of upgrades.

What the Mossberg 940 Pro Waterfowl Does Best

As its name suggests, the 940 Pro Waterfowl is a waterfowl gun, and all its corrosion-resistant features mean waterfowl hunting is its best use. It can be put to any purpose you could use a 3-inch hunting gun for, although it’s heavier than you might prefer for an upland or run and gun turkey gun. In its natural environment of the waterfowl blind the 940 will shed water like a duck and keep working much better than the 930.

At 7 ¾ pounds, the 940 Pro Waterfowl is a heavy gun by today’s standards, and there are much better choices for shotguns to carry in the uplands or to sling over your shoulder for a day of walking the turkey woods. Obviously if you believe 3 ½-inch shells are a necessity for waterfowl or turkeys, you will need to step up to the 935 Pro Waterfowl, which lacks some of the advanced features of the 940.

Mossberg’s 940 Pro Waterfowl fits squarely into the company’s tradition of value and innovation. The boron-nitride-coated parts, stainless spring, stock drain holes, and more all contribute to making the 940 as weather-proof and reliable as the basic 930 platform can be. It is a bulky gun and may not appeal to some due to its weight, but it’s a solid choice, and a good choice for left-handed shooters who can use the top safety just as easily as right handers can. The improved gas system should help the gun cycle reliably and make it a good choice for bad-weather duck and goose hunting.