A Christmas Story: The Pistol from Santa

After finding an unexpected gift under the tree, the entire family drove to the Pit for a round of shooting. Best. Christmas. Ever… 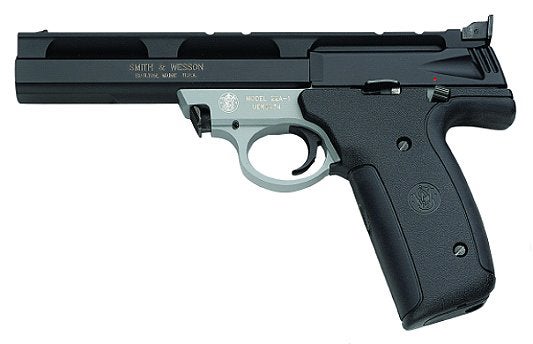 The S&W 22A was a cheap rimfire pistol with an alloy frame that looked to be coated with gray paint. It had oversize, even bulbous, plastic grips, and the full-length rail made it tough to grab the slide and pull it back. It also had a nice, steady heft to it and a surprisingly sweet trigger. Best of all, though, I could afford it—and it would be a complete surprise. I owned no handguns and wasn’t particularly interested in them, which I knew was a source of frustration to both of my boys.

At 14 and 10 years old, our sons no longer believed in Santa Claus, but we still divided gifts between the wrapped presents we gave to one another and the unwrapped gifts “from Santa” that Pam and I would put under the tree after the boys went to sleep. I stuck a red bow on the blue plastic box with “S&W” embossed on the side and wrote a note from Santa Claus that read something like: Gordon and John, Merry Christmas, Enjoy this pistol and shoot it safely! -Santa.

The boys were always up before we were on Christmas morning. I heard them going out to get their stockings, and I heard them exclaim in disbelief when they realized what was in the box. As Santa gifts went, the pistol was the all-time showstopper.

The only way to make the gift better was to shoot it, and that meant a trip to the Pit after breakfast popovers. A lot of towns have a nearby place like the the Pit, which was exactly that—a steep hillside excavation at the local WMA open 24/7 as an unsupervised range. You never knew what you’d find there: appliances, computer monitors, signs, pumpkins, and sometimes weird stuff, like mannequins…whatever people felt like dragging downrange to shoot. To an adult, it was unsavory and squalid. To a kid, it was wondrous, a dump where you could not just find bullet riddled trash-treasures, you could put more holes in them.

There were always people at the Pit, any day of the year. There were a few there that day, looking like—how to put this—the kind of people who would shoot appliances on Christmas Day. That group now included the Bourjailys. We rolled up in a minivan, took our place on the line, and shot up all the .22 ammo I had bought for the day. My wife, not a gun person, gamely took a few shots, and I made a point of gathering up our targets and trash when the range went cold, and we left.

“Everything about that trip to the Pit seemed wrong in the very best way,” said Gordon, my older son, much later. “I had never seen Mom fire a gun. We were dressed for church and we were shooting. The contrast between the Apollonian order of Christmas and the Dionysian excess of the Pit was mind-blowing.” (He talks that way. He was an English major.)

“There shouldn’t have just been a pistol under the Christmas tree,” says John. “It seemed like a mistake, but it was too big to be a mistake and there it was.”

Despite its impact that day, the pistol lost its magic over the years. When the kids were home, we’d take it to the gun club, where it misfired and stovepiped way too much. The awkward rail/slide arrangement made it a chore to clear. Last year I asked the boys’ permission to trade it in for its successor—the much better S&W Victory. “That piece of junk?” said Gordon. “Get rid of it.” Now when they visit, we shoot the Victory. The 22A is gone, except in all of our holiday memories, where we will keep it forever.