The best ay to get a truly accurate reading of a bullet's velocity through your rifle is with a chronograph. And that information can really help your shooting 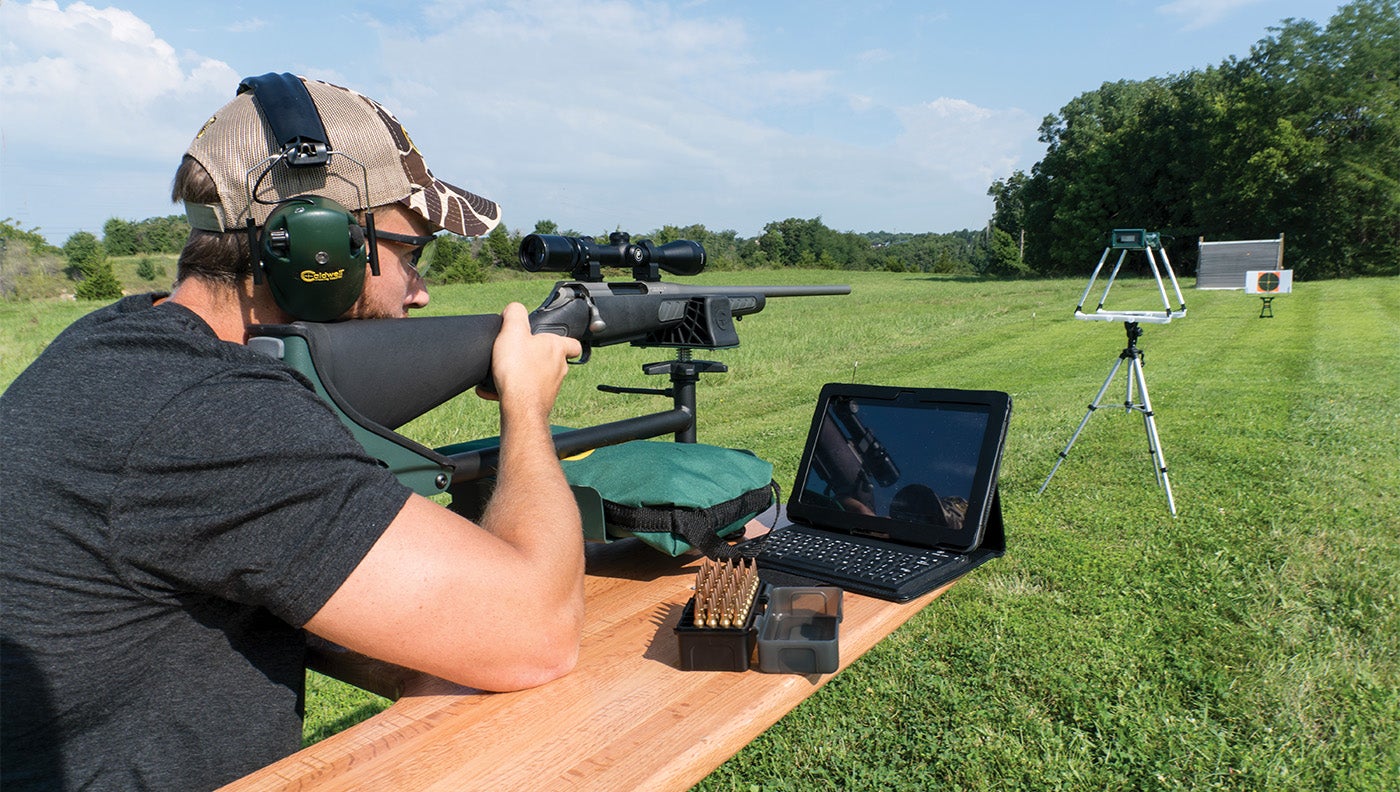 Shooting through a chronograph is a big help when trying to perfect a handload for your rifle. Richard Mann
SHARE

Some people think a chronograph is just a toy for geeks who like to shoot. Some don’t even know what a chronograph is or what it does. But if you’re serious about shooting at distance, if want to make sure the bullets you shoot at animals work the way the are supposed to, and especially if you reload your own ammunition, you need a chronograph. A chronograph is to shooting what a speedometer is to driving. Without one you’re just guessing.

What is a Chronograph?

To non-shooters, a chronograph is basically just a clock or wristwatch with a stopwatch function. A shooting chronograph is more than that, however, and you definitely couldn’t put it on your wrist. It combines two photoelectric cells, separated by a specific distance in a triangular-shaped metal frame, and it measure the time it takes a bullet to pass between the two cells. The chronograph then takes that time and computes the velocity of the bullet in feet per second.

Shooting chronographs range in price from around $100 to $600 or more. Some, like the Caldwell Ballistic Precision chronograph, have the display built into the frame that houses the photoelectric cells. Others have a remote display, and at least one, the Oehler 35P, even comes with a printer. The chronograph I use is the Ballistic Precision G2 from Caldwell. It retails for about $240, runs off AC or DC power, and sends all the data to my smartphone where it’s cataloged. The companion smartphone app does some ballistic calculations for me and even allows me to store photos of the targets I shoot with the velocity data.

Technically, the only thing a shooting chronograph can tell you is how fast your bullet was traveling when it passed by the photoelectric cells. However, this velocity is very important information, because it helps you determine other important data points related to internal, external, and terminal ballistics. It’s not uncommon for actual velocities to be very different from advertised velocities; I’ve seen differences as high as 250 fps with centerfire rifle cartridges. The only way you can make accurate ballistic calculations is to know a load’s actual velocity from your firearm. And for that, you need a chronograph. Here are five things you can glean from that information that can make a real difference in your shooting.

Once you know the actual velocity of a load in your rifle, you can then determine trajectory and wind drift. The chronograph will not give you this information; you’ll need to input the velocity data it provides into a ballistics program or app. Combined with other information, like the ballistic coefficient of your bullet and environmental conditions, the app uses the chronographed velocity of your load to provide you with accurate trajectory and wind-drift information necessary to get hits at any distance.

Some shooters feel strongly that kinetic energy is an important factor when trying to determine a load’s suitability for a particular hunting application. You’ve heard, no doubt, that 1000 foot-pounds of energy at bullet impact is optimal for hunting whitetail deer. Whether that is true is hotly debated, but if it’s important to you, then a chronograph will help, because there’s no way to calculate kinetic energy at any distance, unless you know the actual velocity of the bullet when it leaves the muzzle of your gun.

Every time you fire a round across a shooting chronograph you get a velocity reading. A single velocity reading will give you an idea about actual velocity, but an average of five to 10 shots (typically taken from about 10 feet away) is much better information. By shooting multiple shots, you can discover how consistent your ammunition is. Ideally, you want maximum velocity variations of less than 25 to 30 fps. With velocity variations much larger, bullet impact at extreme range can show extreme vertical dispersion, which makes getting good hits harder.

Hunters want bullets to deform on impact so that they’ll create more internal damage. Bullets need to impact within a certain velocity range to deform properly, and that velocity varies between bullet designs. Manufactures can provide these threshold velocities, but they’re worthless unless you know the velocity of a particular bullet when it’s fired from your rifle. By using the muzzle velocity obtained by a chronograph, you can compute the distance at which a bullet’s velocity will drop below the speed needed to initiate expansion. With most centerfire rifle hunting bullets this is somewhere between 1600 and 2000 fps.

Smart reloaders follow the data provided in the proper manuals to make sure their handloads are safe. However, the data provided in reloaded manuals is not definitive, but only a guide. Using a shooting chronograph to monitor muzzle velocity is the best and most affordable tool a handloader can use to make an educated guess about internal pressures and load safety. If your handload is generating muzzle velocities well above what it’s supposed to, you’re not working magic, you’ve loaded ammunition that’s not safe. On the other hand, tweaking the muzzle velocity of handloads within a safe range can help you find that magic recipe that results in the type of accuracy you’re after.