Bead, Iron Sights, Red-Dot, or Scope? How to Choose the Right Sight for Your Turkey Gun

A bead already comes with your gun. A red-rot is lightweight and precise. A scope gathers light and magnifies. But which is best for your turkey gun? 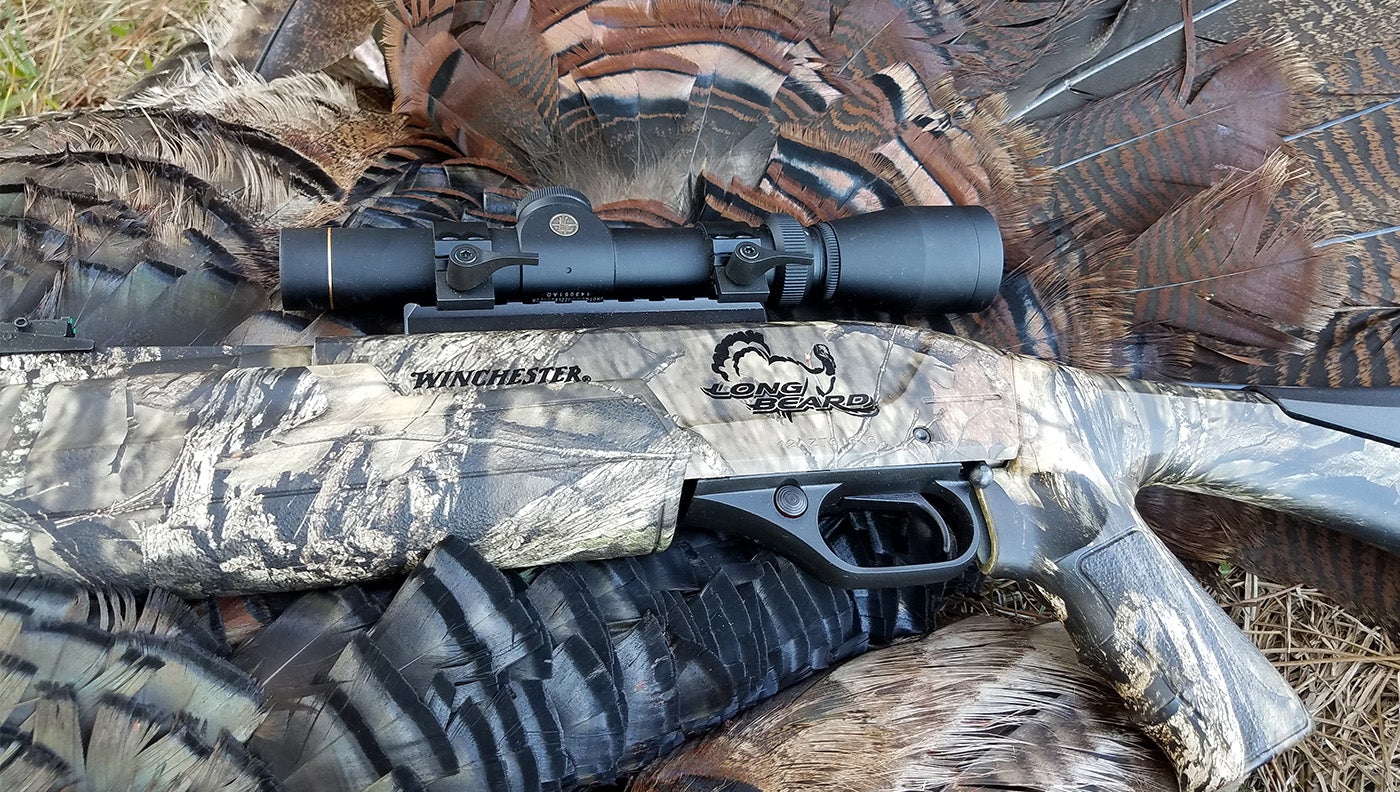 Until you have missed a turkey or two, you don’t give sights a whole lot of thought. After all, what’s to miss? A turkey makes a big, standing target. Shotguns, as we all know from TV and the movies, are area weapons, throwing huge clouds of shot in a wide swarm. So we should never miss a turkey—except that in reality, the bird’s vitals are not much bigger than a walnut balanced on a pencil, and that “wide swarm” of shot can be the size of a cantaloupe out where the turkey stands. You need to shoot with a little bit of precision, and that means using sights of some kind.

A bead or two, iron sights, a red-dot, or a scope can all help put your pattern where it needs to be. I have shot turkeys with all four types. Each has its pros and cons. So, let’s break down what you should know.

Beads come installed on your gun so they’re free, which is a strong point in their favor. As long as your shotgun shoots straight—some do and some don’t—you put the bead on the turkey’s neck and pull the trigger. Keep your head down on the gun, and the turkey falls over. It really is that simple.

Some hunters prefer beads. I once asked Haley Dunn, who represented the United States in skeet and grew up hunting turkeys, about sights on turkey guns. “I am so used to the sight picture down my barrel, I would never want to change it by adding sights,” she said. It’s hard to argue with her record on targets or turkeys.

Mid-beads, which are absolutely worthless for wingshooting, can help you line a gun up on a tom’s head by serving as a crude rear sight. You nestle the small bead behind the front bead, and it gives you confidence that the gun is aligned and your head is down. I used to have a white mid-bead on a turkey gun behind an orange front bead on a BPS, and it worked about as well as beads can work.

Beads aren’t particularly precise, and when you have the gun on the bird, the muzzle blocks a lot of your view. But even if you spend the money on a mid-bead and add a front fiber-optic, beads are cheap and they work most of the time.

Iron sights are more precise than a bead and they adjust, which is absolutely essential of your gun shoots high, low, right, or left. One of my first turkey guns was a Poly-choked Auto 5. I patterned it and learned that it shot nearly a foot high at turkey ranges. To keep from sailing the entire pattern over the bird’s head, I would have to hold down around the turkey’s feet somewhere. A set of adjustable iron sights that clamped onto the rib, very similar to the TruGlo Gobble Dot sold today, solved the problem perfectly.

Like a bead, an iron sight blocks part of your view of the bird. But in addition to their adjustability, iron sights are light, they don’t fog up or get waterspots on their lenses, and they don’t depend on batteries.

Red-dots are the in thing on turkey guns right now with good reason. They are fast to use and precise enough to hit minute-of-turkey-head targets. They are lightweight, parallax-free, and have endless eye relief. Battery life has improved to the point where most sights measure it in years, not hours. I am partial to those made by Aimpoint, because I have expensive taste in red dots and because, while battlefield-grade reliability isn’t necessary for a few mornings in the turkey woods, it does increase the already high chances that my sight won’t go haywire and my dot will be lit when it’s time to shoot.

The Aimpoint H1 red-dot sight isn’t cheap but it built to last and work flawlessly.

If red-dots have a drawback, it’s that the lenses are usually tinted to better enhance the dot, and sometimes in very low light that tinted lens gives you a dark view of your bird, even if you shoot as you should with both eyes open. Also, red-dots, although smaller than scopes, often sit much higher over the bore of a gun than a scope on low rings does. There are a number of slick, sight-specific tactical mounts that fit on popular shotguns and allow you to mount the sight much lower, and I am in the process of putting together an 870 turkey gun with a very elegant Scalarworks mount for a Trijicon RMR-style sight.

You don’t see scopes on turkey guns like you used to, which is a shame. Even at 1x, scopes are bright, and if you keep your low-power scope around 1.5x-2x, as I always have, it makes turkeys very easy to see even in dim morning light and dense growth. I have used a scope to shoot turkeys standing, walking, running, and, once, flying. I had a 1x-4.5x Nikon variable with a turkey reticle on it for years. All you had to do was put the ring on the reticle around the bird’s head and shoot. A couple of seasons ago, faced with a now or never shot on a public land turkey at nearly 60 yards, I cranked the scope up to 4.5x for the first time ever and killed the bird cleanly. Scopes have a lot going for them. Scopes are also bulky, heavy, and have limited eye relief.

This 1.5-4×20 from Leupold makes a great scope for turkey hunting.

Currently my 870 Super Mag has an Aimpoint Micro H-2 on board, and there’s a Leupold 1x-4x variable on removable mounts I can put on it in a minute if I get mad at the red dot. Or I can use neither and rely on the gun’s excellent factory iron sights. All three beat a bead, and all three have their uses.

What if I had to pick just one? Well, when a colleague was recently traumatized by her first-ever miss on a turkey last spring, I sent her my old Nikon 1x-4.5x variable turkey scope. I am fairly confident it is the sight that will prevent her from ever missing a turkey again, so it would seem when it comes all the way down to it, I am on Team Scope.

Read Next: Best Turkey Shotguns for 2022