Suddenly Everyone Wants a Sub-Gauge Waterfowl Gun. I’ll Stick with My 12, Thanks

Waterfowlers are turning to 20- and even 28-gauge shotguns, which work better than ever with the latest loads. But you know what still works better than both? A 12-gauge 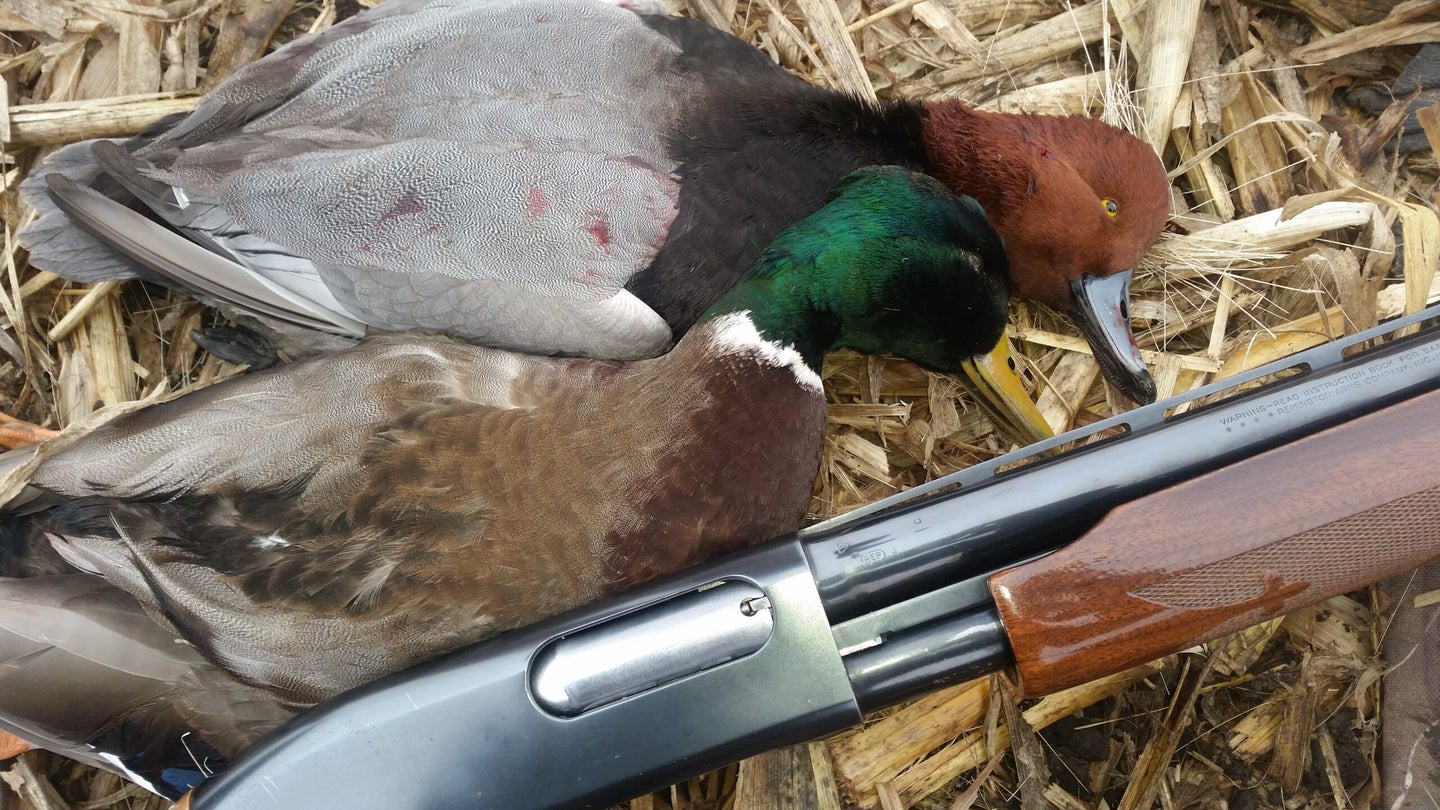 The author's 12-gauge Remington 870, with a redhead and mallard. Phil Bourjaily
SHARE

Color me no fun, but the trend toward small-gauge waterfowl guns that seems to make other hunters giddy doesn’t excite me. A friend who hunts the same nearly duckless wastelands of eastern Iowa that I do has a similarly jaded view of new guns like the 3-inch 28-gauge Benelli Super Black Eagle 3. “You and I don’t shoot enough ducks to get bored with it,” he says. “We never think, this is getting old. What’s another way I can shoot a duck?”

Americans Have a Thing for Little Guns

Apparently a lot of people are shooting enough ducks to get bored with their 12s, because 16-, 20-, and now even 28-gauge guns are becoming a thing among duck hunters. I would say that part of this trend has to do with the fact that hunters in general are getting older and weaker, except that plenty of younger hunters seem ready to jump on the small-gauge train, too. Really, I think it’s nothing more than the fact that Americans have always liked small-gauge guns. And that these things come in waves. We’ve had small-gauge trends before. When 3-inch 20-gauge factory loads came out in the 50s, some gun writers (particularly Francis Sell) promoted the new load as a long-range waterfowl killer. I even remember reading one story about shooting ducks over decoys with the 28-gauge back in those pre-non-toxic days.

The coming of steel shot and the need for big hulls to hold big pellets put an end to the first small-gauge waterfowl trend for quite some time. But now, with improved steel and bismuth loads containing pellets that don’t shatter quite so easily, lots of hunters are eager to try small-gauge guns again. To be clear, no one is advertising small-gauge bismuth as long-range duck and goose ammo. On the other hand, HeviShot, which has become semi-affordable, does give the 20-gauge close to the reach of a 12 with steel, at least for ducks. TSS, if you can afford it, will turn a 20-gauge into a gun that can kill ducks and geese farther away than most people can hit them. Yet, as good as it is and despite all the press it gets, TSS is not a big driver of this trend simply because few hunters are willing to drop $10 per shell. The small-bore trend is mostly about shooting birds that decoy properly, and given that, my feeling is this: You know what works really well for decoying birds? Twelve gauges. You know what works really well on days those birds don’t quite finish right? Also 12 gauges.

During the season before last, I did all my hunting with a 20-gauge Benelli M2 Performance Shop waterfowl gun to see if I was a small-gauge duck hunter after all. And by “all my hunting,” I mean as much as I could do with almost no water and no ducks in my main hunting spot. I loaded the gun with an ounce of bismuth 3s, which I think is a good all-around over-decoys load. I let my birds work close and killed teal, mallards, and big Canadas dead in the air with the 20. It was a cute, slender gun, and I could see how someone with a more highly developed sense of fun than I possess could get into this small-gauge waterfowling thing.

Then one morning I hunted a loafing pond, and the geese finished short. Light guns can become hard to hit with as ranges increase. The 20-gauge gun that popped up and pointed surely at 20-yard birds lacked heft and smoothness when ranges stretched to 30-plus. Bad shooting may have played a part, , but I really believe I’d have done better with a heftier 12 and some more, bigger pellets in the air. I did shoot a limit, and without losing a bird, but I had to do a lot of chasing and extra shooting to subdue my geese. Yes, maybe it was just one bad day, maybe a fluke even, but I put the 20-gauge away and shot my 12 loaded with steel BBs at geese close and far for the rest of the season. When I pulled the trigger, they folded up the way I like them to. The Benelli Montefeltro and Browning B 80 that I use for ducks and geese aren’t heavy guns, but they have enough bulk and weight up front to be easy to shoot.

If you have the skill and the restraint to shoot your ducks and geese within range of a small-bore gun, and if it makes waterfowling more fun for you, knock yourself out. There are plenty of good guns and loads out there to choose from. For me, the fun of waterfowl hunting lies in trying to trick ducks and geese, and in dropping them cleanly out of the sky when I do fool them. So, I’ll keep shooting a 12.