7 Hunting and Military Prototype Guns That Never Were

A hunting rifle with a built-in radio, a semi-auto Model 99, and a .45 ACP Luger are just a few of these strange gun designs 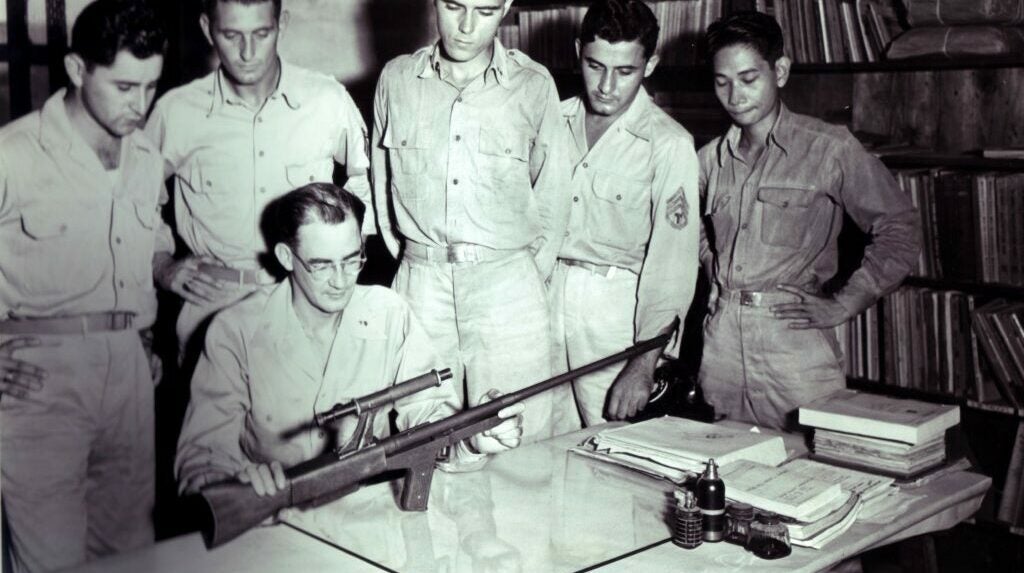 The U.S. Army Model 45A was an early example of a bullpup rifle. U.S. Army Signal Corps
SHARE

GIs fighting with Luger pistols seems like an idea out of some alternate reality novel, but it could have happened. And we almost could have bought John Wayne Gun Company rifles at our local store, too. That’s the fascination of prototype guns: they show us what could have been. Some of these guns were ahead of their time, while some just seemed like a good idea at the time—whether they turned out that way or not. Here are seven hunting and military prototype guns that you may never have heard of.

The transistor radio was first sold commercially in the U.S. in 1954, and before long, everybody had one. So, thought someone at Winchester, who wouldn’t want a transistor radio in the stock of a  Model 70?

And why not? Guns have had compasses, patch boxes, ammunition storage, and even feed grinders* in their stocks. Surely a radio in the stock would appeal to anyone. In 1955, Winchester made up a Model 70 in .308 with chromed metal and a transistor radio inletted into the stock behind a walnut “W.” After taking the prototype to several trade shows that year and stirring up exactly zero interest, Winchester retired the idea. The one existing prototype resides in the collection of the NRA’s National Firearms Museum.

*During the Civil War, someone had the semi-good idea of putting a feed grinder in the stock of some Sharps carbines so cavalry troopers could grind feed for their horses. It was not, as is sometimes reported, a coffee grinder.

Of all the American doubles, Parker guns had a mystique that set them above the rest in the minds of many hunters and shooters. When the Parker Mystique met the Great Depression, mystique lost and Parker sold out to Remington. Remington stopped making Parker guns in 1942.

In 1984, Parker Reproductions—made in the Olin-Kodensha factory in Japan—appeared on the market. They were good guns and attracted quite a bit of attention. It may be that someone at Remington saw this and thought, if Americans will buy Japanese Parker reproductions, they will certainly buy the real thing. So in 1987, Remington’s Custom Shop made up a few 20-gauge Parker doubles, combining the Parker design with modern niceties like screw-in chokes.

It’s not clear why the project never went forward—although Remington struggled to make good break actions, as anyone who owned a Peerless or an Ideal can attest. At any rate, a few were made, and one belongs to the NRA’s collection in the National Firearms Museum.

The [John] Wayne Gun Company was almost a thing. In fact, it existed briefly, just long enough for designer Jim Sullivan to come up with prototypes for what would have been the first Wayne rifle, a semiauto .22.

Wayne used to get his boat repaired at the yard next door to Armalite, and, being a gun person, he would stop into the shop frequently. There he befriended Jim Sullivan, who worked on the M16 and would later go on to work on the Ruger Mini 14, Model 77, and the Ultimax machinegun, among others.

Sometime in the late 70s or early 80s, Sullivan successfully pitched Wayne’s business manager on the idea of the Wayne Gun Company. With backing from the Duke, Sullivan drew up a new .22 that featured, among other things, a nifty removable sideplate for disassembly. Wayne even took a couple of trips to the range and shot the rifles, but he had also made the mistake of making his son-in-law his business manager. After that relationship went south, the new business manager decided the Wayne Gun Company was not a good idea and Wayne stopped funding the project, leaving only the two prototype rifles behind.

In 1942, a young man from Brooklyn showed up at the Springfield Armory with a Savage Model 99 he had been tinkering with. He had converted the .250-3000 lever-action into a gas-operated semiauto. The people at the Armory were impressed enough to offer William B. Ruger a job as a firearms designer.

Ruger himself wrote about the gun in the December 1943 issue of American Rifleman magazine. He said the modification had been accomplished with “only superficial changes in a few of the parts.” He also wrote, “I believe after this war there will be a great upsurge in the popularity of self-loaders for sporting purposes, just as there was a great increase in the popularity of bolt-action guns after the last war. If such a trend does come, this trim little self-loader, if it were made commercially available, should be right in step with prevailing fashions in firearms.”

Ruger and his business partner Alexander Sturm went into business in 1949, and while they never did produce a self-loading .250-3000, Ruger designed a .44 Magnum carbine, followed by the 10/22. The 10/22 has a rotary magazine, perhaps inspired by the Savage, and went on to become something of a success, to the tune of over 7,000,000 made.

In 1906 and 1907 the U.S. Army held trials to select a new sidearm. Manufacturers entered both revolvers and semiauto pistols (and one hybrid, the Webley-Fosbery automatic revolver). Georg Luger of Germany’s DMW supersized either two or possibly three—or maybe four or five or six—of his namesake toggle-action pistols, chambering them in .45 caliber, and brought them to America for the trials.

Although the DMW pistols performed well enough for the Army to order more for additional tests, the Model 1911 pistol won the trials, beginning a service career that still hasn’t ended. DMW never delivered the remaining test pistols, perhaps because they had signed a contract with the German military, which lead to Lugers and 1911s facing off in two World Wars.

One of those surviving pistols sold to a collector for $150 in 1949. His estate later sold it for a million dollars and it has been called “the million dollar pistol” since. A replica made a cameo appearance in the movie Wall Street, in which Gordon “Greed is Good” Gekko brags about owning “the rarest pistol in the world,” while showing off a prop .45 ACP Luger.

Although experimental bullpup firearms—compact guns with the action behind the trigger group in the stock—date back to 1900 and before, the idea didn’t become popular or widespread until the mid-1950s. Today, there are several bullpups, most famously the Austrian military’s Steyr-Aug rifle, which wasn’t introduced until 1978.

Seen in that light, the 45A is an intriguing mystery. It’s not clear whether the 45A was an actual prototype or a non-firing mockup, but it seems to have been the invention of some US Army ordnance personnel stationed in the Philippines in 1945. It appears only in photographs, including several showing a soldier in the field. The 45A used a .30 caliber BAR magazine, and presciently, featured a scope that also functioned as a carry handle just like the one used on the Steyr-Aug.

Read Next: The 17 Most Innovative Military Firearms Ever

John Brown had his “Eureka” moment not in the bathtub, as Archimedes did when he discovered displacement when water overflowed the sides, but on the rifle range in 1890 with his brother Matthew. Browning noticed the muzzle blast of his rifle disturbing nearby grasses, and he realized there was energy in that blast that could be harnessed and used to operate the action of a firearm. Later that same day, John and Matthew went to work on a Model 1873 Winchester lever-action he had in the shop to convert it into a gun that would let him test the feasibility of gas-operation.

The Brownings attached a metal plate with a hole in it for the bullet to pass through to a rod connected to the rifle’s lever. The muzzle blast pushed against the plate, moving it far enough to cycle the action. With the principle of gas operation validated by the Flapper, the Brownings could proceed to design their first gas-operated gun, the Model 1895 machine gun. It was nicknamed the “Potato Digger” for the lever underneath the barrel that swung back and forth, which was clearly a refinement of the original “Flapper” design.