Heavey Gets Schooled in Long-Range Shooting at Gunsite Academy

Gunsite is the best-known of a growing number of shooting schools around the country, where anyone can become a better rifle shot. To prove it, we sent Heavey 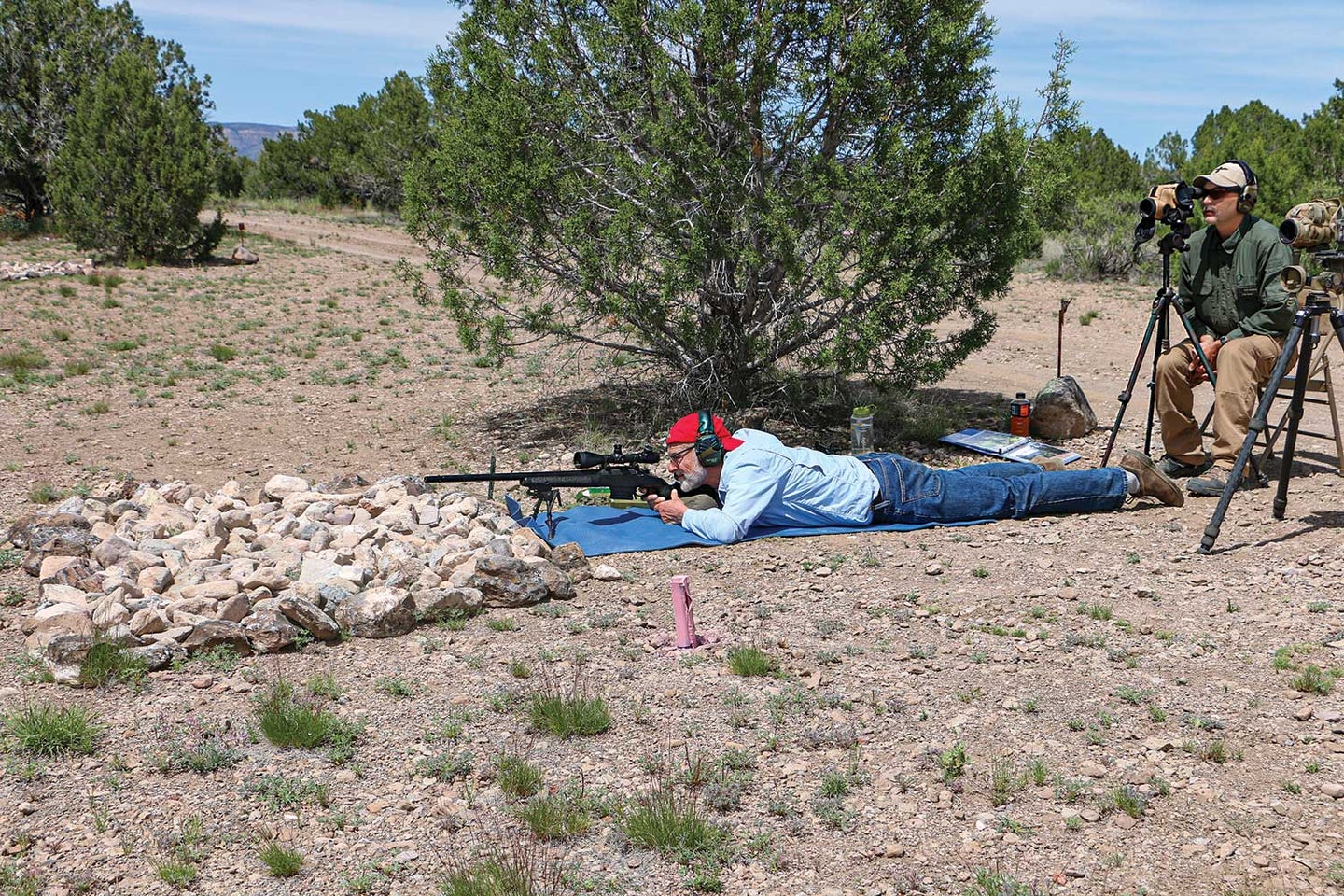 Prone to Error: With Gunsite instructor Gary Smith spotting, the author does his best to hit a faraway target. Courtesy Gunsite Academy
SHARE

The single best trigger-control training device ever is a ballpoint pen, says Gary Smith, my ­precision-​rifle instructor at Gunsite Academy. He holds one loosely between his middle finger and thumb, his trigger finger slowly cycling the top button over and again. “You want steady, gentle contact and to control the motion throughout,” he says. If you do it right, the point of the pen doesn’t wobble. He practices this two or three times a week for 15 minutes at a time, usually while watching TV. “Drives my wife crazy,” he says.

I’m near Paulden, Arizona, trying to cram Gunsite’s seven-day precision-rifle course into three. Before we start, Smith asks what my goal is. Avoiding abject humiliation jumps to mind, but I tell him I wouldn’t mind hitting a target the size of a deer’s vitals at 400 yards—an unfathomable distance to an Eastern bowhunter. He asks how much long-range shooting I’ve done.

“None,” I say, and he nods approvingly. I think he figures at least I’m not bs-ing him.

Of Gunsite’s 52 instructors, Smith is one of just five qualified to teach the art and science of long-range shooting. After learning theory with him for two hours in a classroom, I have a much better understanding of how little I know. “This course is fun to teach because it’s the most mentally demanding one we offer,” he says. “We get to watch smoke roll off everybody’s heads.” There must be clouds of it billowing off mine.

At the range, I get prone behind a precision rifle built by Mike Moore of TAC Drivers, LLC. It’s a .308 with a custom Surgeon action, a Krieger barrel, and a McMillan stock, and it’s topped with a Leupold Mark 4 4.5–14x50mm scope with M5 turrets and a tactical milling reticle (TMR). I have 300 rounds of Hornady Match ammo, but for now I just need to put five shots on paper at 100 yards while Smith watches. I do my best. When we go to inspect my target, it’s not good. The bullet holes are evenly but widely spaced, like the dots on the face of a die.

“I saw you jerking the trigger as the reticle crossed the target,” Smith says. People do that because they’re trying to overcome a wobbly sight picture. “And your finger is flying off the trigger after the shot like you’ve got a booger on it.” Also, I’m lifting my head. “Ideally, you want to regain your sight picture and see the animal fall after your shot,” he says. “I love to see them fall.”

Apart from these quibbles, I assume I’m doing great. Oh, and I also need to “accept the wobble.” Smith says wobble in the sight picture is unavoidable. Instead of correcting it, you need to trust it—because your aim will always return to the target. We walk back 20 yards so he can demonstrate with his .45. He exaggerates, the 1911’s barrel weaving drunkenly. He shoots four rounds in quick succession, all hitting inside a circle the size of a sea scallop. I ask if this is some kind of trick. No, it’s just what happens when you trust the wobble rather than slap the trigger when the sight picture looks good. OK, I’m convinced. I ask about his pistol. It’s a model he’s evaluating for Ruger, and it’s too early to say. He has only put 3,000 rounds through it.

On the short ride back to the main facility, I ask about his view on long-range hunting. He tells me he started hunting seriously at age 7 and won’t take any shot that requires him to hold off the vitals. “Otherwise you’re guessing,” he says. “Your rule of thumb that your gun has an 8-inch drop at 300 or 400 yards? That’s a guess.” How far above the vitals is 8 inches? Another guess. “Your ethical range,” he says, “is the distance at which you can make the shot 10 times out of 10.” Otherwise, you’re too far away. Hunt better. Get closer.

The next morning is more classroom time. I learn that the trigger hand is comprised of three parts. The last three fingers are a unit whose job is to snug the butt into your shoulder. The thumb lies lightly alongside your trigger finger (not around the rifle’s grip), barely touching the gun, and its job is to do nothing, so as not to introduce torque. Last is your trigger finger, and its only job is to press straight back at a 90-degree angle, applying slow and steady pressure until—and after—the trigger breaks.

Next, Smith says, “Don’t get suckered into focusing on the target.” (Who, me? I think. Why would I ever do that?) Your eye can only focus in one plane at a time. If the target is crystal clear, the reticle is probably not on the absolute middle of it. Focus on the reticle instead, and it will find the center as the target blurs slightly. “Look, if I’m trying to bring you a cup of coffee across the room, I focus on the coffee, not you,” Smith says. “The coffee is where the problem is. Focus on the problem.” Damn, no wonder I spill so much coffee.

I also learn that good shooting is all about doing the exact same thing the exact same way every time. This ­includes sucking oxygen. I know the old saw about taking a breath and letting it halfway out. “But what’s a full breath?” he asks rhetorically. “What’s half a breath? There’s no way to measure, right?” Better, he says, to find your “natural pause” point. He tells me to take a breath and let out as much as feels right. That’s a place your body likes and can find again. That’s where you want to shoot from. Fun fact: Your eye muscles are the smallest and weakest in your body, and start to lose focus in as little as eight seconds without oxygen. If you go that long without shooting, breathe again.

Back on the range, we drive to the top of a sandy ridge, and Smith directs me to a matte-brown silhouette 350 yards away. There’s not much breeze, but there’s some. “Wind is the most critical factor at distance,” Smith says. “And the only way to learn about wind is to put a bullet through it.” There are two places where the wind has almost no effect: at the muzzle and at the target. Two-thirds of the way to the target is where the bullet has traveled far enough that small forces have big effects. That’s where you want to know what the wind is doing.

He tells me to look for the heat mirage, rising here and there from the desert landscape. Then to defocus the scope slightly and say out loud which way it’s “flowing.” Huh? I’d never thought of mirage waves having direction. But sure enough, a closer look reveals a pattern to the watery refracted waves. It looks like they’re flowing left to right, so that’s a left wind. “Very good,” he says. I find the target and fire twice. Smith calls one correction, then another. On the third shot, I hear the faint metallic ping. “Good shot!” he calls. “You’re listening to what I’m telling you to do,” he says approvingly. Apparently, this isn’t as common as you’d think.

Finally, he directs me to an old Toyota Celica parked 400 yards out, specifically the driver. I see the head-size round plate in the driver’s side window. “Shoot it,” he says. On the third shot, I ring the plate. “Congratulations. You just took out a hostage-taker at 400 yards with a head shot.” Now I do feel proud. And determined. Any whitetail that takes a hostage within 400 yards of my stand is going to regret it.

Smith says that I’m making progress, but I still have some things to work on. For one, my body is angled rather than straight behind the rifle, which affects accuracy because recoil starts before the bullet leaves the muzzle. By positioning my body directly behind the gun, I’ll be more accurate.

I’m beginning to understand that my rifle shoots much better than I do, and that my job is to line up the sights and get out of the way. An important part of this, Smith tells me, is finding my “natural point of aim,” where you point the weapon instinctively once you relax into a position. Smith tells me to get set up behind the scope and get on target. Then to shut my eyes, take a couple of breaths and relax, and open my eyes to see where the crosshairs are. If they’re still on target, good. If not, squirm around until they are. That’s your natural point of aim. That’s the position from which you’ll have the best accuracy.

After lunch and a bit more classroom time, we’re back on the ridge, and I’m hitting 18-inch-wide silhouettes at 600 yards. It’s work after a few shots to focus at this distance, like lifting 10-​pound dumbbells with my eyes. It’s even harder work to both focus so intently and relax at the same time—not to ­mention practice good trigger control, snug the rifle straight back, concentrate on the reticle rather than the target, and make myself accept the wobble. It helps to remember to breathe too. But I’m doing it. “I was a little worried after seeing your first shots at 100,” Smith says. “But you followed instructions, and now you’re making shots.” One of the great benefits of being so unacquainted with success is that when it shows up for a visit, it’s a genuinely pleasant surprise. I’m having fun.

Read Next: Here’s Why Average Rifle Groupos Have Shrunk in the Last 10 Years

On my last morning, we head back up to the ridge, and with Smith calling corrections, I hit targets at 725, then 766, then 804 yards. I can’t see my shots or hear a ping, but when I notice my instructor grinning, I know things are going well. He loves seeing students succeed, he says. And he just likes being out here. “Every day, I get more time under my belt studying wind. I get up every day happy to be going to work.”

He calls my attention to a human silhouette in the shade of a tree 1,000 yards out. It’s a long poke, but the method doesn’t change. Adjust the turrets for elevation, hold so many mils left or right for the wind, press the trigger. It takes four shots to walk my way onto the target, and then I hit it.

“Nice shooting!” Smith calls from behind the spotting scope. He tells me that I’ve come a long way in three days and asks me how it feels. I have to think about it. On the one hand, I’m no wannabe sniper, and shooting an animal at even half this distance would, to me at least, be something other than hunting. On the other hand, I just hit a target at 1,000 yards—and it feels great.