Beer is the mother of invention. Or at least it was with the bottle-cap lure—a creation that dawned on the... 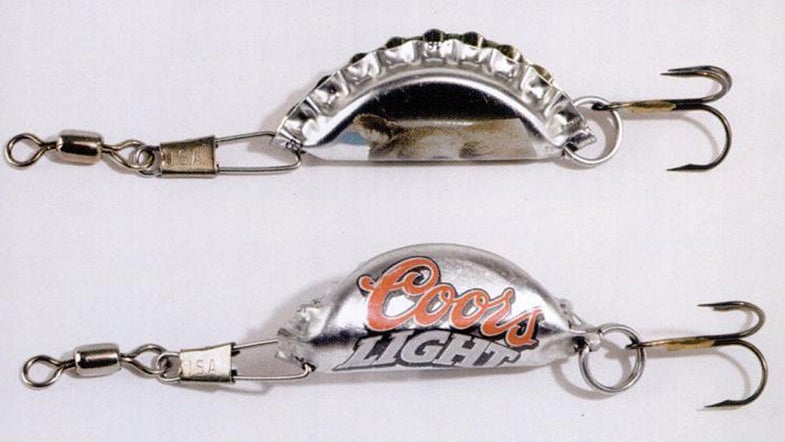 Beer is the mother of invention. Or at least it was with the bottle-cap lure—a creation that dawned on the slightly intoxicated mind of Alberta tackle-shop owner Norm Price as he was relaxing with a brew one fateful day. “I bent one of the caps in half and threw it on my workbench,” Price recalls. “It landed next to a hook. I looked at it and said, ‘That would catch a fish.'”

Price put steel balls inside the folded cap and added a hook and a swivel, and the bottle-cap lure was born. His first four casts into Alberta’s Bow River netted two trout. “This lure catches any fish that eats minnows,” he says. “I usually retrieve it steadily, twitching to give it some action, but I’ve also jigged it ice fishing, rigged it behind bottom bouncers for walleyes, and skipped it across the surface for pike.” What brand works best? “Coors Light,” says Price, who wasted no time founding the Original Bottle Cap Lure Co. “You can’t beat the Silver Bullet.”

At first, Price got bottle caps from beers that he and his friends drank. “Paying for all that beer cut into our profit margin, so we started recycling bottle caps from local bars,” he says. When the legal departments in some breweries complained, Price told them, “I’m not stealing your logo. I’m recycling your trash.” But companies such as Canadian brewer Sleeman and the Pittsburgh Brewing Co. saw the marketing potential and now donate bottle caps to the cause.