How Reading Trout Water Can Make You a Better Outdoorsman 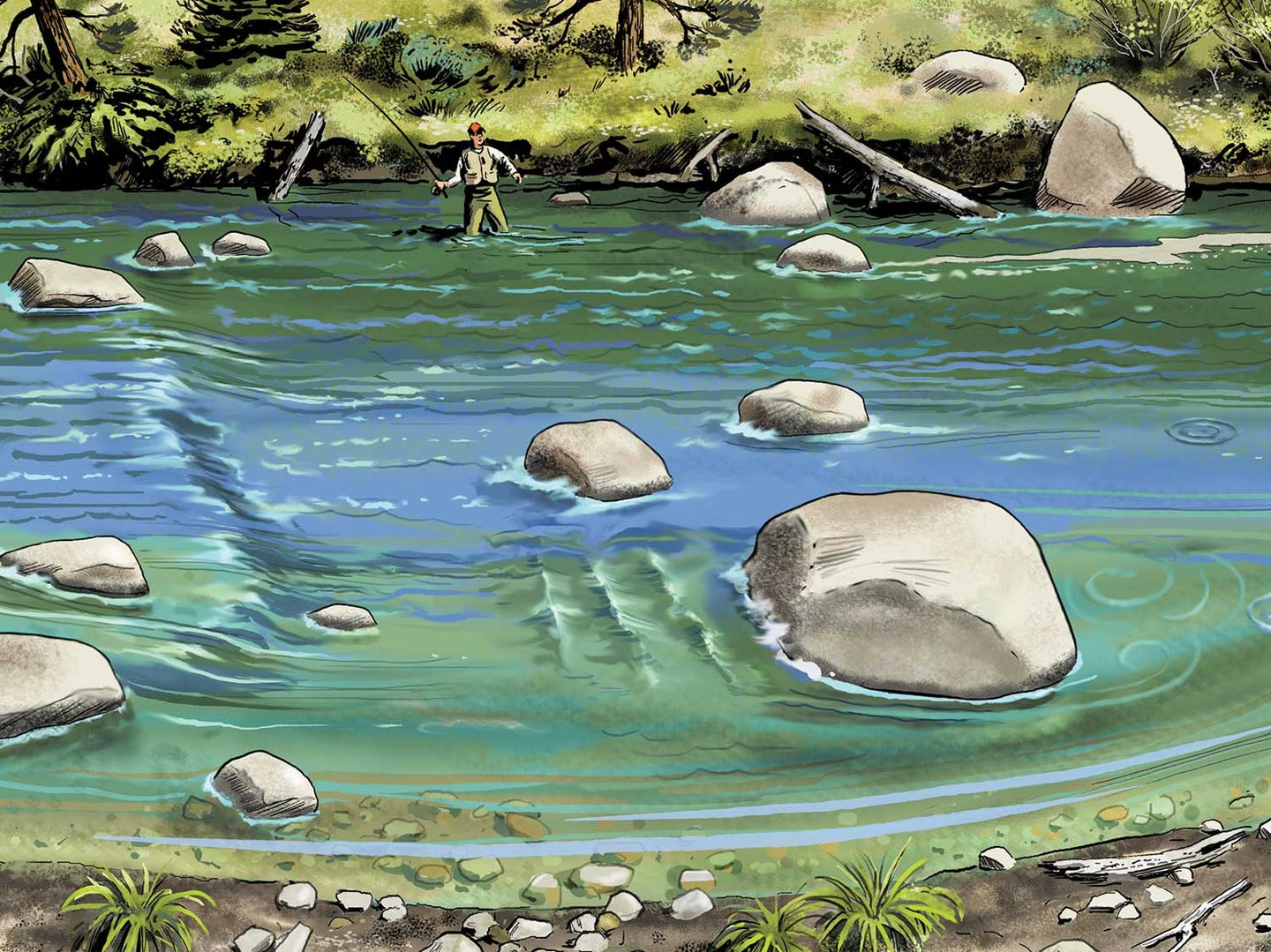 Clapotis. That is the word I’ve been trying to scrape off the tip of my tongue for an hour, and it comes back to me as I cast a Purple Haze dry fly along a rock-walled stretch of Montana’s Spotted Bear River. The wall gives out where a boulder squats on the shoreline, pushing a bulge of clear flow into the middle of the channel, and it’s about the troutiest-looking 20 feet of creek I’ve ever seen. The leader straightens, the fly drops, and I ready myself for what will surely be the jolting strike of a serious cutthroat trout. Only a big fish could manage life in the clapotis.

The word comes from a French phrase meaning “lapping of water,” and it describes a standing wave train that neither moves nor breaks, created by waves that bounce off a hard surface—like a rock face—and stack up against more incoming waves. I mend the fly line to keep it out of the tall whipped-frosting waves, giving the parachute fly a drag-free drift in the slick between the rock and the chop. When the big cutthroat slashes, I am so smug and proud of myself for sticking the fly in its face that I miss the strike entirely.

Which, of course, is not the point. The point is that I figured out ahead of time where a trout might live in this stretch of water, so I could drift a fly to its precise location in the current. Trout tend to feed in narrow lanes, unwilling to expend the energy to move out of their comfort zone no matter how tempting the fly. When you miss a fish in a tough lie like that one, you tell yourself that the important thing isn’t that you screwed up the strike. It’s that you were smart enough to read the water.

Like the act of fly-casting itself, reading trout water has taken on near-mystical associations. The practice of carefully studying the flow of water in a trout stream, and divining the most likely spots where trout hold, has been likened to some sort of performance art. But at its core, it’s nothing more than a studied understanding of how water reacts to stuff like gravel bottoms and weedlines and rocks—and how water that has reacted to that kind of stuff is going to affect the fish, fly line, and fly. You don’t need to know what a clapotis is to catch a trout. You just need to know that a fish is likely to be in the calm lane of water between the rock and the choppy place.

Reading trout water isn’t voodoo. It’s a skill. And like any skill, it takes a while to get really good at it. Like a lifetime.

Putting the Pieces Together

The Southern Appalachian streams of my native North Carolina have been my longtime trout-water-reading class, and there’s hardly a better laboratory. These creeks might be 3 feet wide or 30, but they’re rocky, steep, and twisty—and all small enough that the various sorts of trout water are right there at your feet: pools, glides, runs, riffles, pocket water, holding water, current seams, eddies. Clapotis galore.

The best anglers deconstruct the creeks for long, quiet moments before even thinking about a cast. They watch bubble lines to learn where swifts seam into calmer water. They push polarized glasses up to get a better sense of what stream glare suggests about surface flow. Before they ever look for fish, they look for the places where they should look for fish. You work the problem backward: If I think a fish is there, I’ll need to drop my fly to the right of the foam so the force from the riffles pushes the fly into the throat of the current seam. And more likely than not, the place where it seems simply impossible to put a fly is the place where I’d live if I were the boss trout of the pool. That brings on more study. More calculation. Can I sidearm skip a fly under the branches if I crawl out onto the gravel bar? Could I worm through the rhododendrons and dapple the fly along the undercut bank old-school style? Maybe the best cast is no cast at all.

All trout anglers have tied themselves up inside these Gordian knots of fishing strategy. It’s one of the things that makes trout fishing so much fun. But in untying these knots, water pulsing around my legs, fish just waiting to be caught, I’ve found a surprising benefit—one of the other reasons that make trout fishing such a surprising pleasure. I bet any trout ­angler—​or every angler, for that matter—has experienced this. It’s often said that we fish to escape the real world, with its tangled webs of responsibility and challenge. But more often than forgetting about reality, this is what happens to me: I step into a stream with a head full of stress—what to do about two family cars with the CHECK ENGINE lights blinking, how to win the next round of Deadline Whack-A-Mole—and hours later, on the trail back to the truck, solutions begin to bubble up in my mind. By focusing so tightly, time and again, on the riddle of where a fish holds in a single seam of current, my brain seems to break free of all the torque that’s locked up the gears.

This might seem like dime-store philosophy, the sort of grist you’d pick up in a self-help book, but I guess I’ve been fishing—and living—long enough to look at the upstream reaches of my life and recognize that there’s just about always a way to float a solution down into the sweet spot.

But first you must ask yourself: What are the pieces? How do the parts fit together? Solve the little puzzle inside the larger one, and watch what happens. The sweetest moments of life aren’t necessarily void of turbulence. They’re just holding in the calm places on the edge of the riffles. The ones you can’t see until you step into the river.