How Shotgun Pellets Draft in a Shot String

If you can’t account for every shot pellet on your paper target, chances are drafting (not stray pellets) is the cause 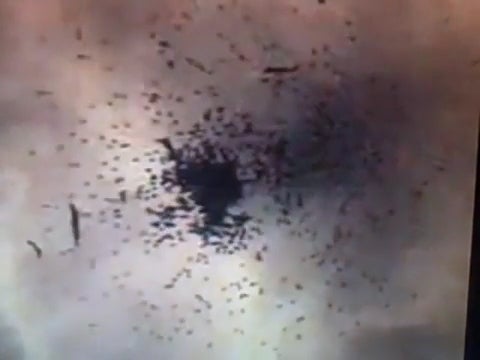 The shot string exists the muzzle in a clump, then begins to expand.

When I try to describe a shot cloud to a new shooter—a lot of them think they are trying to hit a target with a single projectile—I tell them to imagine a swarm of bees. That analogy seems to help, although it’s not precise. Swarms of bees are a bunch of individual bees flying sort of randomly (I have been watching bee swarm videos on YouTube this morning to be sure). Pellets draft behind one another.

Shot exits the muzzle in a solid clump. As the leading pellets encounter air resistance, they begin to peel back from the clump, exposing others. The trailing pellets draft behind the leaders, like bike racers, Indy cars, or geese, shielded from the air resistance. Those are the pellets that wind up flying straight and forming the pattern core, while the leaders are the ones that slow, spread, and string out, and hit the pattern fringes.

The drafting phenomenon is real. If you have the chance to shoot pellets into ballistic gelatin, or to watch them on high-speed video, you’ll see that some pellets fall into line behind others and stay there, striking the target in exactly the same spot. When you look at gelatin, you’ll see there are a few instances in almost every pattern where two pellets enter the same hole. As the first pellet slows down in the gelatin, the second plows into it, like a tailgating car at a stoplight, then it glances off at an angle.

But, you say, that could be mere coincidence. After all, if you shoot a few hundred pellets at the same spot, some of them are liable to pass through the same hole.

Watching buckshot fly downrange will make you a believer in drafting. A few years ago, on one of my visits to Federal’s underground tunnel, we shot a bunch of buckshot patterns on paper and recorded them on high-speed video. We’d shoot a 15-pellet load at a giant sheet of paper and only find 14 holes. Either one pellet was missing a giant sheet of paper completely (which could happen) or two were going through the same hole. It didn’t happen every time, but it happened a lot, and the odds of two pellets out of 15 hitting the same spot on a huge piece of paper 40 yards away has to be low.

Watching the high-speed video confirmed that, indeed, often one pellet would tuck in behind another, and both would pass through the same hole in the paper. “This drives law enforcement guys nuts,” Federal’s Erik Carlson said. “They have to account for where every pellet goes at the range, and they shoot a lot of targets where two pellets probably passed through the same hole.”

Does this matter from a practical standpoint? I don’t think it does. It probably means your shotgun is patterning just a little bit tighter than you think it is when you count holes in paper, because you can’t tell how many passed through each hole.