How to Build the Ultimate PRS Rifle

This Masterpiece Arms 6mm Creedmoor is state of the art in the rapidly evolving world of the precision rifle series. Just think what the future might hold 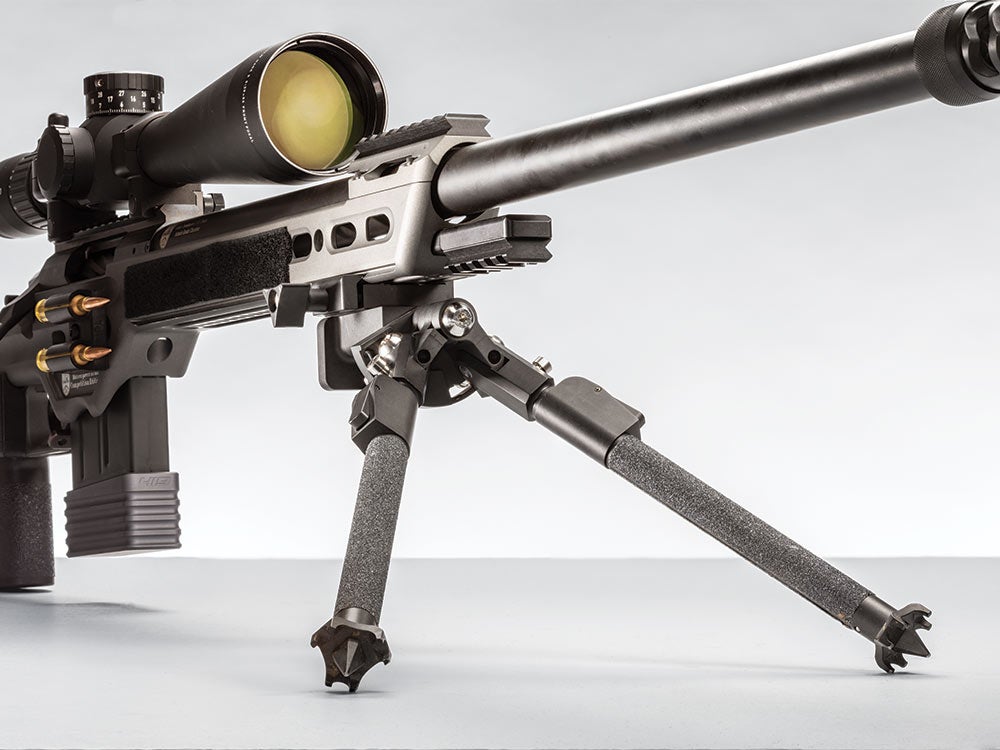 In the race to stay competitive in practical precision rifle matches, shooters have pushed the development of rifles, bullets, cartridges, optics, and shooting accessories forward at an unprecedented rate. The companies that are in tune with the needs of this demanding group are making some of the most accurate and rugged shooting equipment we’ve ever seen.

Today’s PRS-style rifle matches have their roots in the sniper field matches that we shot back in the old days of the early 2000s. Since our actual snipers mostly employed Remington 700s in .308 Win., that’s the cartridge we shot the majority of the time. To gain an edge, some of us more sophisticated chaps would run 155-grain bullets instead of the standard military 175-grainers. They shot a little flatter and bucked the wind better. That little hack made us feel pretty clever. Little did we know what was headed our way.

Today, the precision rifle world is in a state of creative chaos. Last year’s slick new innovation has been rendered obsolete by the person (usually a shooter) who’s built a better mousetrap. Cartridges that won everything a couple of years ago are no longer seen at the firing line. Optics get swapped out seasonally as scopes and reticles improve. Barrel contours, bipods, triggers, bags, and tripods are all in a permanent state of flux.

No company has become more adept at riding this nonstop roller coaster than Masterpiece Arms (MPA) under the leadership of Phil Cashin. Based on the feedback the company gets from its customers and sponsored shooters (as well as its own staff, who are serious competitors too), MPA is able to create prototypes quickly, refine them, and bring finished products to market at a rate that’s left much of its competition in the dust. MPA has the art of innovation dialed in.

Chase Curtis’ actions have caught the eye of many top shooters for their reliable functioning and great accuracy. The Vector has a short three-lug throw that’s lightning quick, in part due to the roller on the tip of the cocking piece, which slicks up the bolt throw when you cock the rifle. The integral recoil lug and integral Picatinny rail lend stiffness to the action and minimize the number of potential failure points. It’s a high-quality item.

Likewise, Proof’s barrels have been coming on strong, elbowing their way into the winner’s circle with increasing regularity.

Off the bench, the rifle is stupid accurate, creating single ragged holes on paper targets at 100 yards—but that’s not how the rifle is meant to be shot. Propped on barricades or concrete sewer pipes, balanced on rocks, clamped in a tripod, or simply shot prone off its bipod, the rifle really shows off its champion bloodlines.

Beyond raw accuracy, a good PRS rifle has to be steady during shooting and quick to maneuver when you’re getting into position and shifting from one target to the next.

One way to increase steadiness is to add weight. And like men cruising through middle age, rifles in the PRS have been packing on the pounds with each passing year. Scoped up, this rifle weighs 16 pounds 3 ounces, and although that sounds substantial, it is actually on the lighter side compared to many of its PRS peers. The mass helps keep the crosshairs on target, but that’s not the only reason it’s a great shooter.

It’s been said that what differentiates humans from other animals is the ability to accessorize. And the smart addition of accessories—such as the ­Really Right Stuff tripod system, Ckye-Pod bipod, and Gittings Equalizer Skid Pad, just to name a few—give this rifle stability under the most challenging shooting conditions, which is what PRS is all about.

Dante got it wrong. The punishment in the deepest circle of hell isn’t being eaten alive by Satan in his frozen kingdom. Real eternal damnation is being stuck in a circle of hunters and shooters arguing about the “best” cartridge for anything—whether it be deer, prairie dogs, or the PRS.

With that in mind, I’m going to put forth the 6mm Creedmoor as the top option right now for shooting in the PRS and similar matches.

The argument is pretty simple. The 6 Creed offers excellent accuracy, low recoil, and good barrel life, and it shoots flat and bucks the wind. But equally important, you can get match-ready ammo from Hornady, Barnes, Federal, and others without needing to reload. The 6.5 Creedmoor also fits the bill, but the 6 Creed is a bit more forgiving since it shoots flatter, giving you a bigger margin for error with range estimation.

If you read about what the top shooters are using, you’ll see the 6 Creedmoor is well represented, but you’ll notice a lot of other 6mm cartridges mentioned too. (Cal Zant, who runs Precision Rifle Blog, does a great job of compiling this data.) The 6mm Dasher is at the top of that list, along with the 6mm BR, 6mm BRA, 6mm BRX, and 6XC. They are all accurate, but factory ammo is either hard to get or nonexistent, and reloading them can require extra steps.

So, my advice would be to stick with the 6 Creed and have at it. If you opt to reload, you can get brass from Hornady, Lapua, ­Alpha Munitions, and Peterson. The bullet options are even more varied. The 105-grain Berger ­Hybrid and 115-grain DTAC are two well-proven mainstays. Other bullets to consider include Hornady’s 108-grain ELD-Match and ­Sierra’s 110-grain Matchking. Barnes makes Match Burners in two weights—105 and 112 grains—and Nosler’s new 115-grain RDF certainly merits a look.

But, of course, this being precision rifle shooting, things move fast. There’s a new game-changing bullet just on the horizon, along with a new 6mm cartridge, neither of which I can talk about, but both of which show a lot of promise. Don’t say I didn’t warn you. 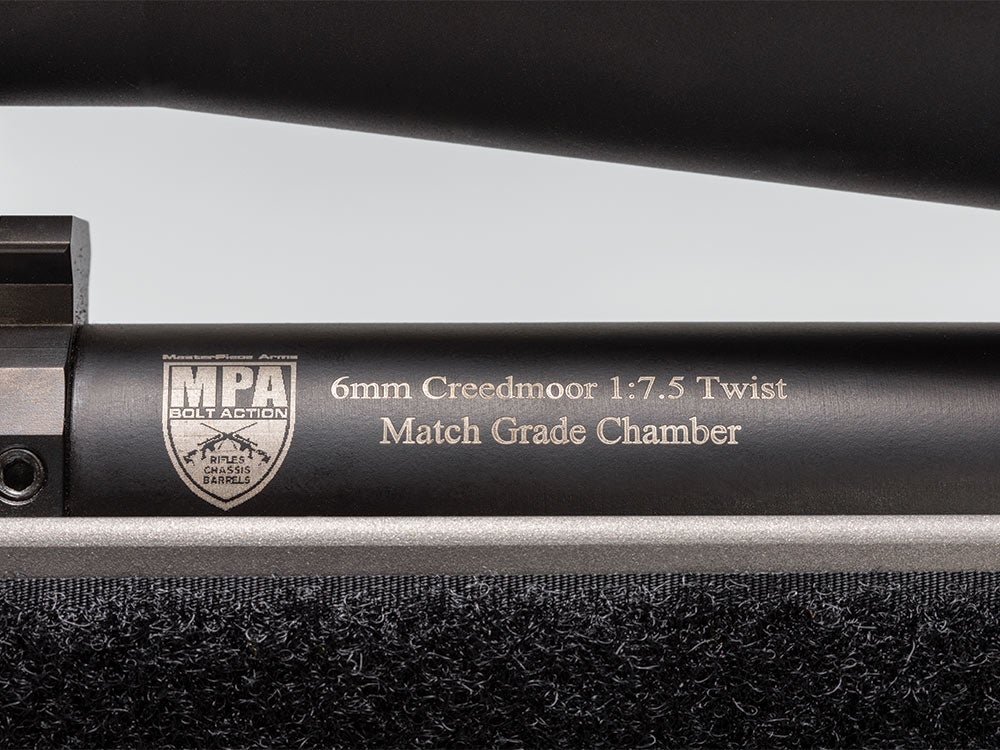 Proof Research made waves with its pricey carbon-fiber-­wrapped barrels, but the com­pany’s solid-steel barrels have become a standard presence on the podium at PRS matches. 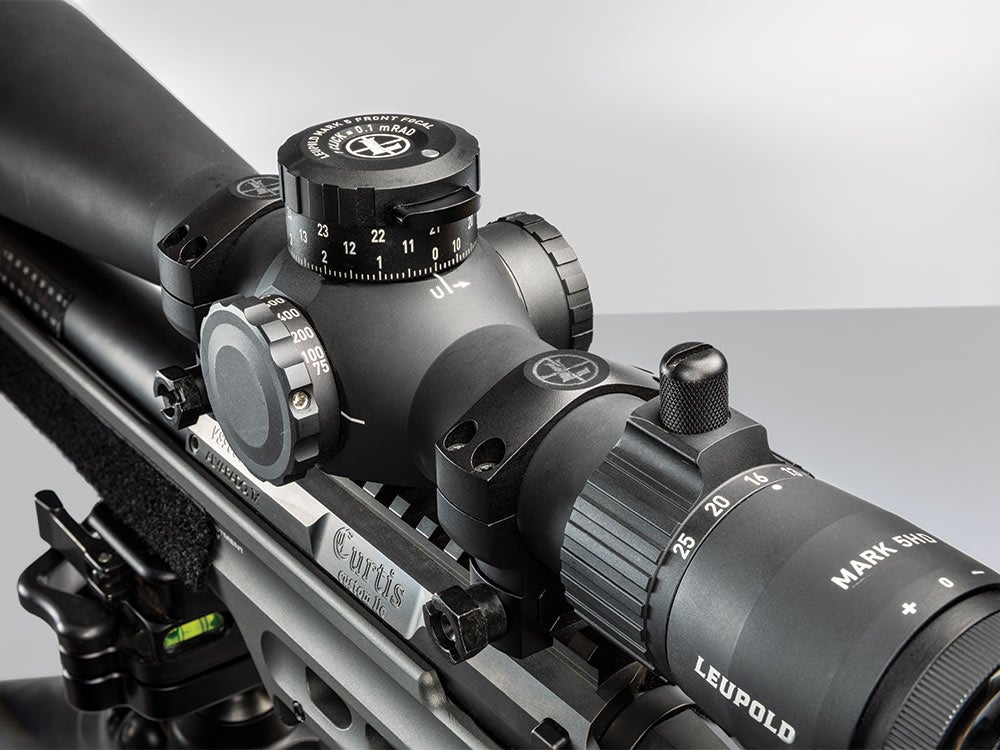 Certain things are nonnegotiable. Regarding scopes for the PRS, this includes a first-focal-plane reticle with reference marks for holdover and wind; quality elevation and windage knobs with clear markings, plenty of travel and, ideally, a good zero-stop; parallax focus; an ample magnification range with the upper end at 25X or more; and being able to survive punishing conditions. The new Leupold Mark 5 5–25X56 checks all those boxes. The mil-based CCH reticle is made specifically for competition, and there’s an MOA version that’s new this year too. 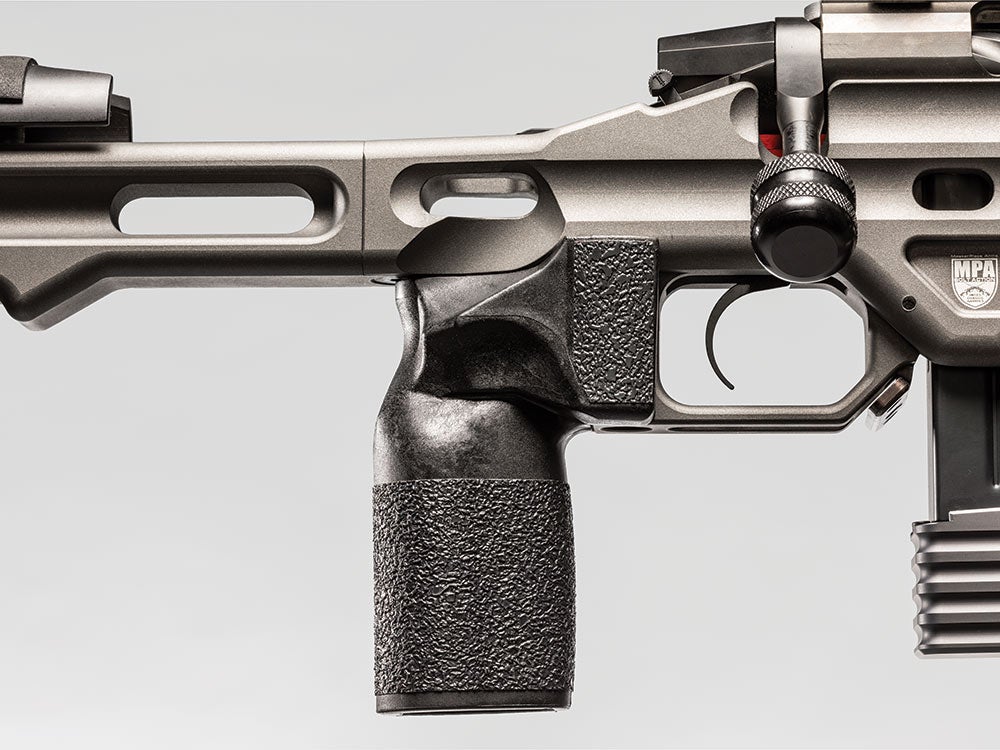 The vertical orientation of the MPA EVG (for Enhanced Vertical Grip) is preferred by many shooters for the control it provides. The EVG augments that by including a shelf the shooter can rest the thumb on, a palm swell, and contours to accommodate the trigger finger better. 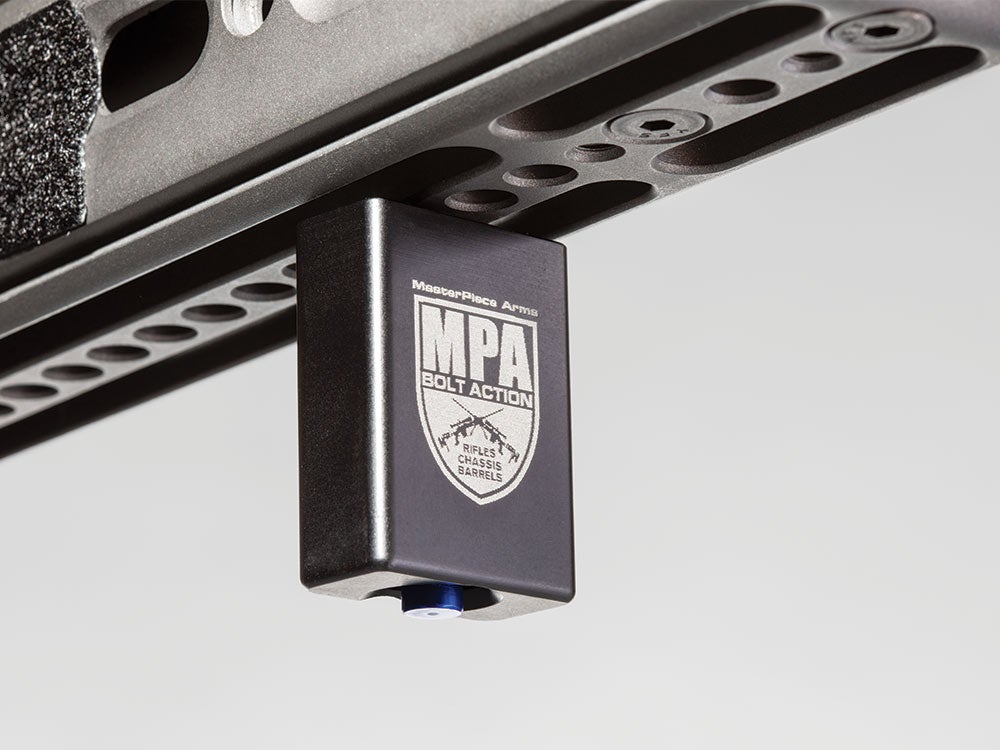 This innovation changed the way shooters handle barricades. Using a push-button release, it clips into the holes integrated in the stock in a flash, letting the shooter brace the rifle by either leaning into the stock or pulling back on it. And the ARCA is the Picatinny rail’s larger sibling—a 1.5-inch dovetail that when clamped into the Really Right Stuff Anvil-30 Ballhead creates a solid shooting platform that can be maneuvered quickly from one target to the next. 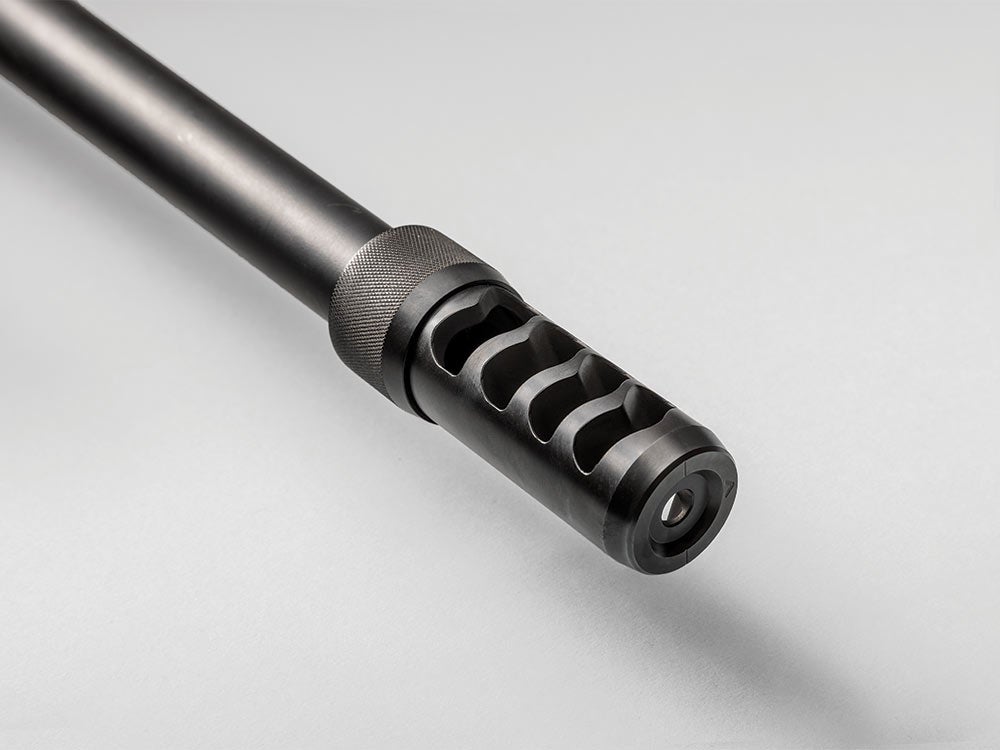 The Sidewinder from Area 419 does an excellent job of both mitigating felt recoil, which is crucial, and limiting the rifle’s movement to a soft kiss that goes straight back into the shoulder. 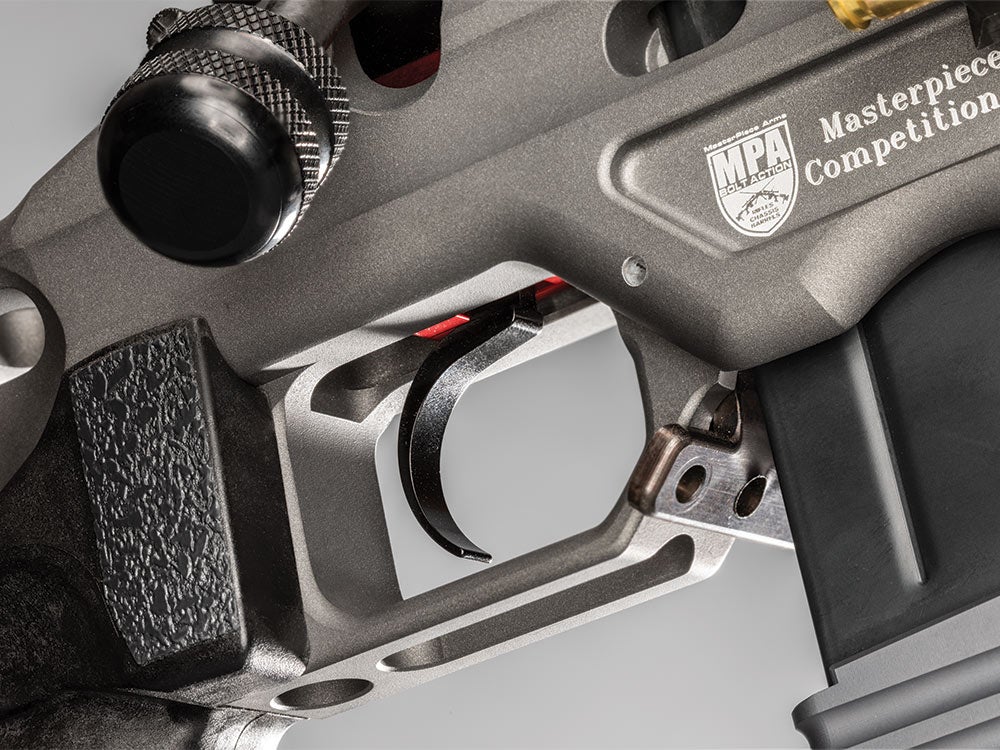 The Triggertech Diamond is the best PRS trigger on the market today. Its camming sear system has zero felt take-up. It is adjustable from 4 to 32 ounces and has earned a repu­tation for utter reliability. 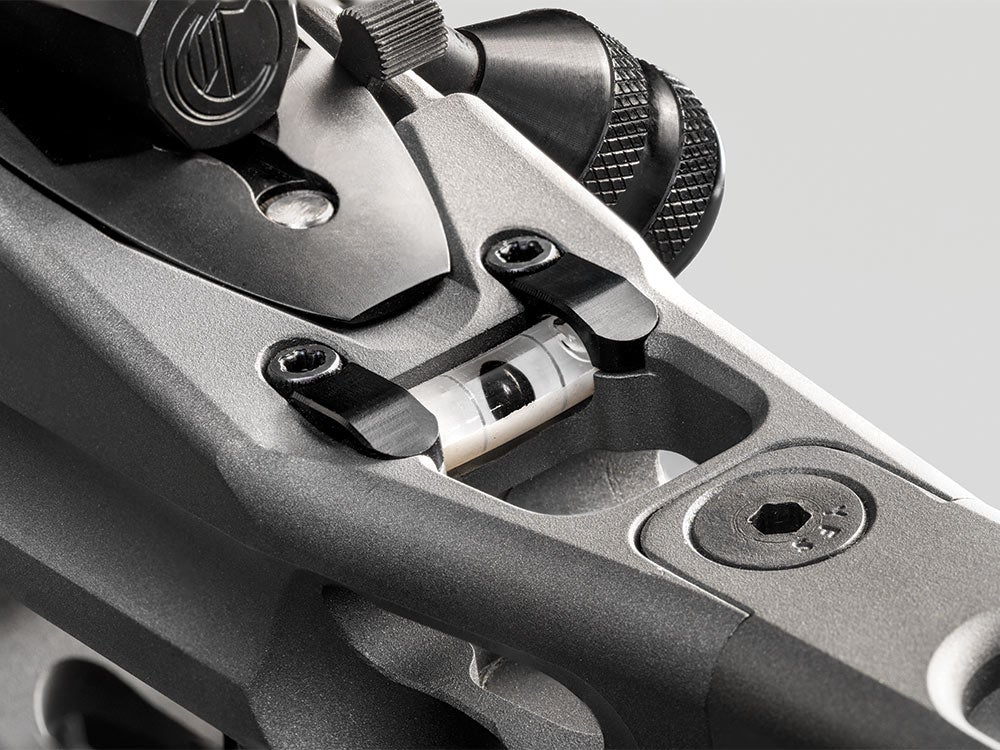 Even a small amount of rifle cant will cause a miss at longer ranges, so being able to reference a bubble level before pressing the trigger will up your hit percentage. The placement of the bubble level within the stock on the MPA chassis lets you check your alignment without needing to break your shooting position. 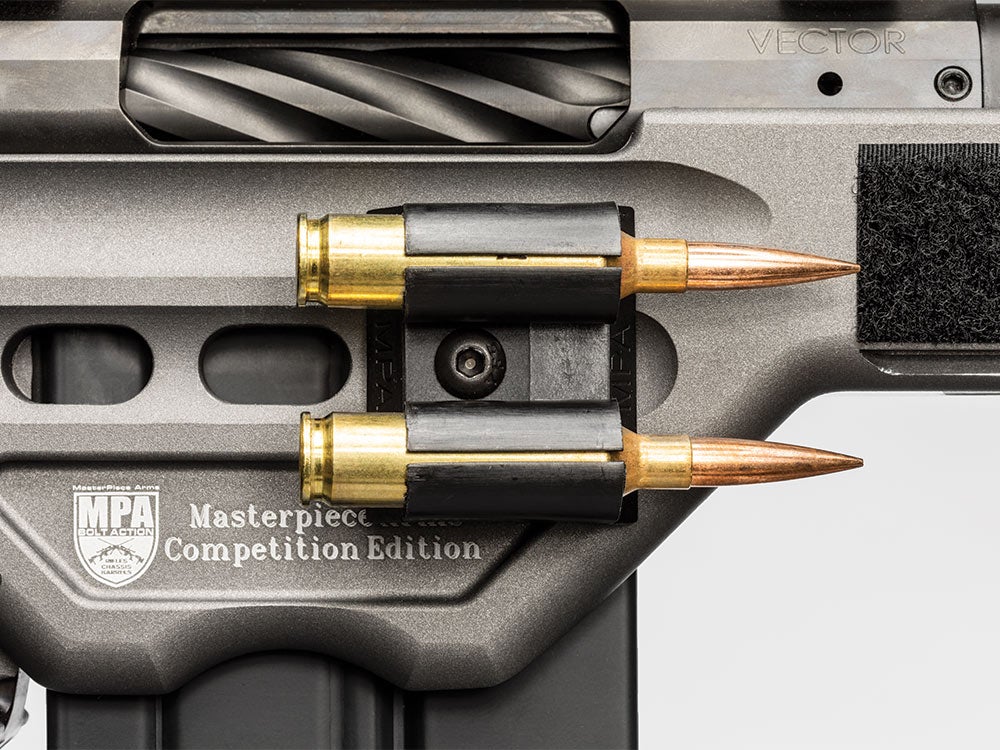 Unless you’re brand-new to shooting, the benefit of this gizmo should be crystal clear. This polymer unit screws into the chassis frame and angles the cartridge bases slightly outward to make them easier to extract. 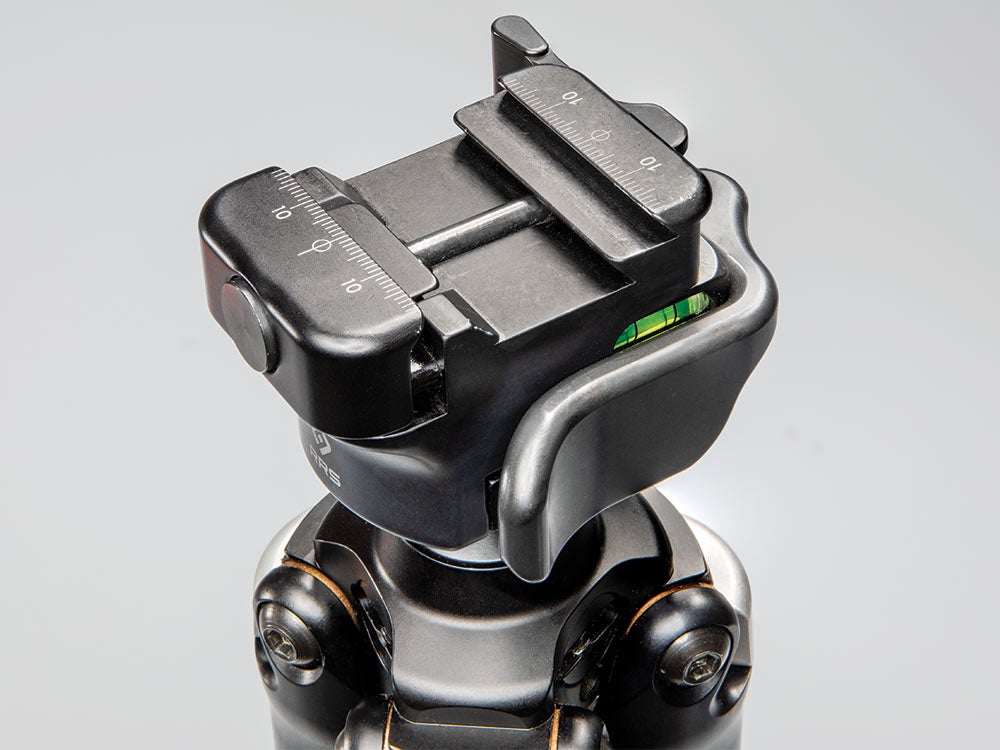 I can’t think of another accessory that has changed PRS shooting quite like the tripods and tripod heads from Really Right Stuff. With a rifle clamped into the Anvil-30 Ballhead, a shooter can get on target quickly and make accurate shots from standing and other positions at distances that were previously unimaginable.

Developed by competitive shooter and Montana-born lumber­jack Ckye Thomas, the Ckye Pod is a true marvel. It is by far the most versatile and capable bipod made today. The mobility of the legs lets the bipod adapt quickly to nearly any situation. They can splay out wide in five increments, be angled forward, spin around to face backward, and be extended by 53⁄8 inches each. The bipod slides up and down the ARCA rail on the stock and can be locked in place anywhere along the length of the fore-end. The bipod also incorporates a barricade block on the backside of where the legs attach. Once mastered, the Ckye Pod will let you get stable from even the nastiest shooting positions.

With it, you can get low enough to shoot through ground-level barricade openings, use it to shoot from a sitting position, or brace the stop against an obstacle while grabbing on to one of the legs, which are wrapped in grip tape for this purpose, to further steady your aim.

Thomas built it to take a beating, to snap into ­action quickly, and to help shooters win. The Ckye Pod succeeds on all counts.

Read Next: How to Improve Shooting Accuracy from a Seated Position 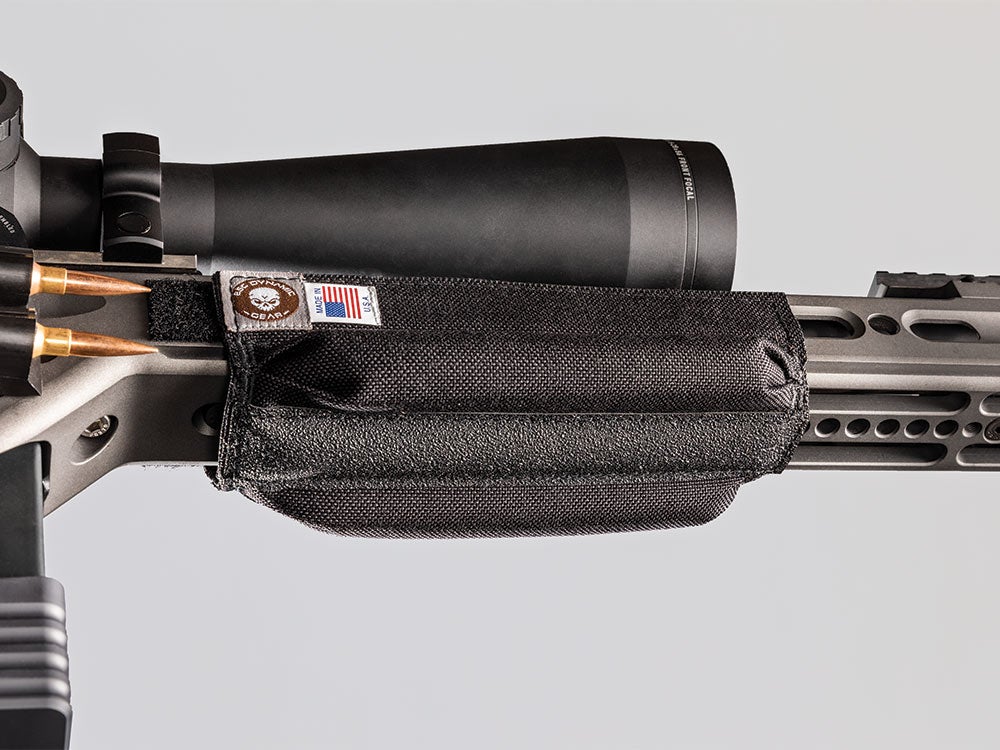 At just 2.8 ounces, the Gittings Equalizer Skid Pad from ESC Dynamics might be the most impressive pound-for-pound shooting accessory made. The small outrigger pads don’t add much bulk, but they improve the lateral stability of the rifle from any position where the fore-end rests on something—whether it is a rock, a two-by-four, or a bag.

Speaking of bags, the Game Changer from Armageddon Gear (not pictured) is another must-have item for PRS. It conforms to a wide variety of surfaces to create a solid shooting platform for your rifle.