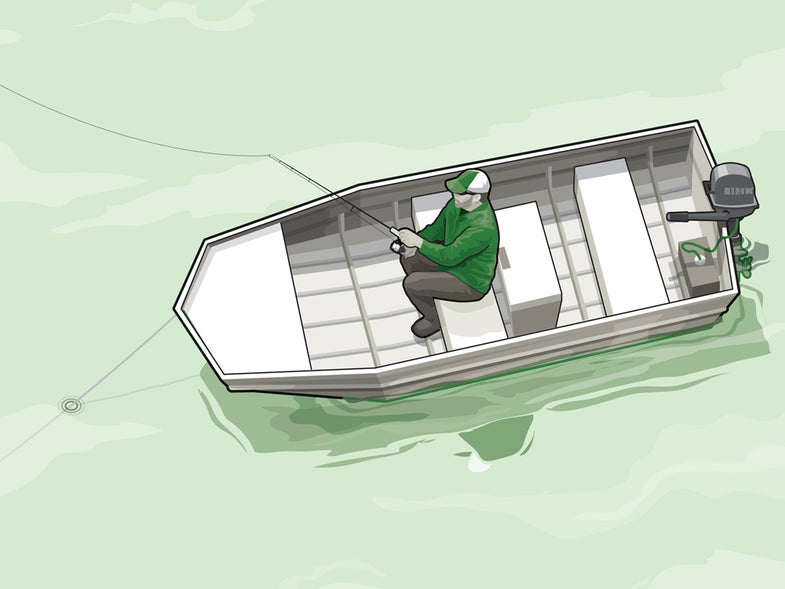 It’s no secret that on hot late-summer afternoons, bites from most freshwater species come few and far between. Largemouths, smallies, and trout often turn sluggish, which can make for a maddening day on the water. But that’s when bluegills can save the day. With a little creativity and savvy, you can coerce these little fighters to open up—​and score a full stringer in the process. Here’s how three pros make it happen during the final, blistering weeks of summer.

Ace guide Tim Moore spends most of the year plying the still waters of New Hampshire’s Lake Winnipesaukee. But come late summer, he shifts his efforts to local rivers and streams. The reason is simple: Moving water is cooler and more oxygenated than lakes at this time of year, so fish will be more active. He focuses on deep spots, in the 20-foot range, and looks for discreet clues, like a half-submerged tree branch, to find cover below. Once positioned above the cover, he casts a No. 3 Salmo Chubby Darter slightly upstream, to give it time to reach the strike zone, then jigs vertically.

Moore stresses a slow presentation now. When vertically jigging, he lifts the rod slowly and lets the bait fall instead of giving it sharp jerks. “If you move it too fast,” he says, “you’ll just spook the fish in that clear summer water.”

When hunting bluegills in the dead of summer, Alabama’s Darrell Adams focuses on shallow-water spawners. Yes, spawners. Many fishermen think bluegills reproduce only in spring, but Adams, a Lake Guntersville guide, is quick to correct the record: Bluegills bed multiple times per year, and especially during summer. Anglers can capitalize on this by wading the flats and sight-fishing for bedded bream now. Bluegills spawn three or four days before and after each full moon, making that the prime time for wade fishing, Adams says. Stay low and out of sight, and once you’ve found a bed, cast a spinner grub, like a 1⁄32-ounce Johnson Beetle Spin, beyond it. Then steadily retrieve the lure right through the center of the bed. Regardless of the spawning stage, bluegills will chase down and attack anything in their territory.

Slab Secret: Have a Vision

Some summer anglers fish only in low-light hours, when fish are apt to cruise and feed. Adams, on the other hand, hits the water at midday when stalking bluegills. “The higher the sun gets,” he says, “the easier it is to see the beds.”

Tactic No. 3: Stick to the Shade

Doug Pietrzak—who guides on Kentucky Lake, a famed panfish hotspot—prowls the shade to find summer bluegills. “Fish want to get out of direct sunlight and heat, just like you,” he says. Pietrzak targets shallow water covered by docks, trees, and other overhangs, but he’s careful to keep his distance with his boat to avoid spooking fish. And a stealthy, careful approach is key. Some bluegills will move to deep water in late summer, Pietrzak adds, but on big bodies of water, like Kentucky Lake, you’ll spend more time looking for those fish than you will catching them. Plus, the sun will zap you and make the day miserable. Instead, he keeps close to the bank and fishes a Berkley Gulp! Cricket under a small float. He favors live-bait imitations since they’re easier to handle and stay on the hook longer than the real thing. And you won’t have to deal with rogue crickets crawling around the boat.

Don’t hesitate to take advantage of the mayfly and other summer hatches, Pietrzak suggests. During these times, bluegills will stay active and eat almost anything on the surface; adjust accordingly.

Throw Shade: Try to cast as far as possible into the shade around docks and overhangs, to keep your lure in the strike zone longer. Then slowly work it back to the boat.