Not ready to let the fish-fry grease cool down? Our pros share their secrets to scoring massive fall crappies when the lake is empty, the air is cold, and the bite is red hot 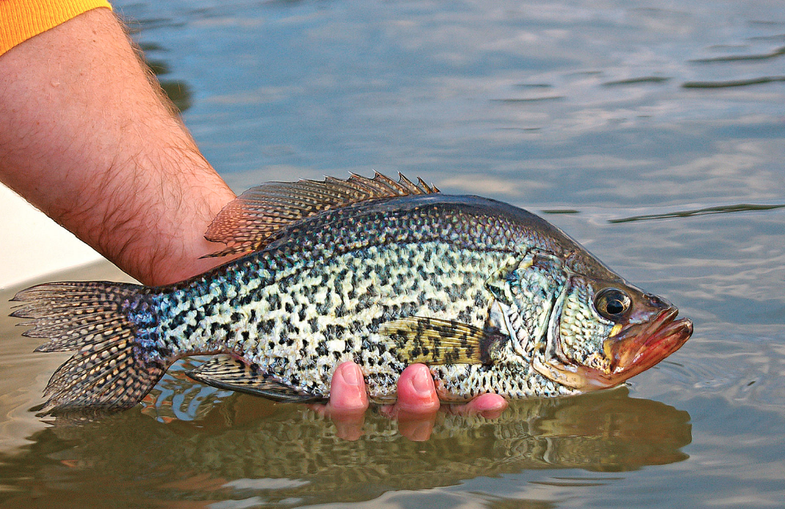 Come November, many outdoorsmen are focused on filling freezers with venison. For those still looking to secure enough crappie fillets to keep the fry grease sizzling past Christmas, this is good news. Long gone is the summer morning boat-ramp rush—not to mention the water scooters, wakeboarders, and pleasure boaters. Lake traffic throughout the country has mellowed, but slab crappies are just getting revved up. After they’ve spent the hot months in the depths with a sluggish attitude and a high degree of lockjaw, November sees crappies sliding shallower, chasing shad, and being positively piggish before winter arrives. We found three veteran slab hunters who know exactly what triggers the fall feed, and exactly where and how to target these fish. Their tips will keep you cranking on your local monster crappies so hard this month, you might work up enough sweat to lose the jacket.

➞ The Location In fall, the bulk of Table Rock’s crappies move from summer suspension in the midlake depths to brushpiles in 20 to 30 feet of water. And it’s on those brushpiles that most anglers target them. LaPoint, however, knows a secret: The true slabs gravitate to boat docks with 30 to 40 feet of water under them, where they’ll suspend anywhere from 5 to 15 feet down in November. Getting at them takes skill and practice, but on average, he’ll hook into a lot more giant fish than the guys working the brush. 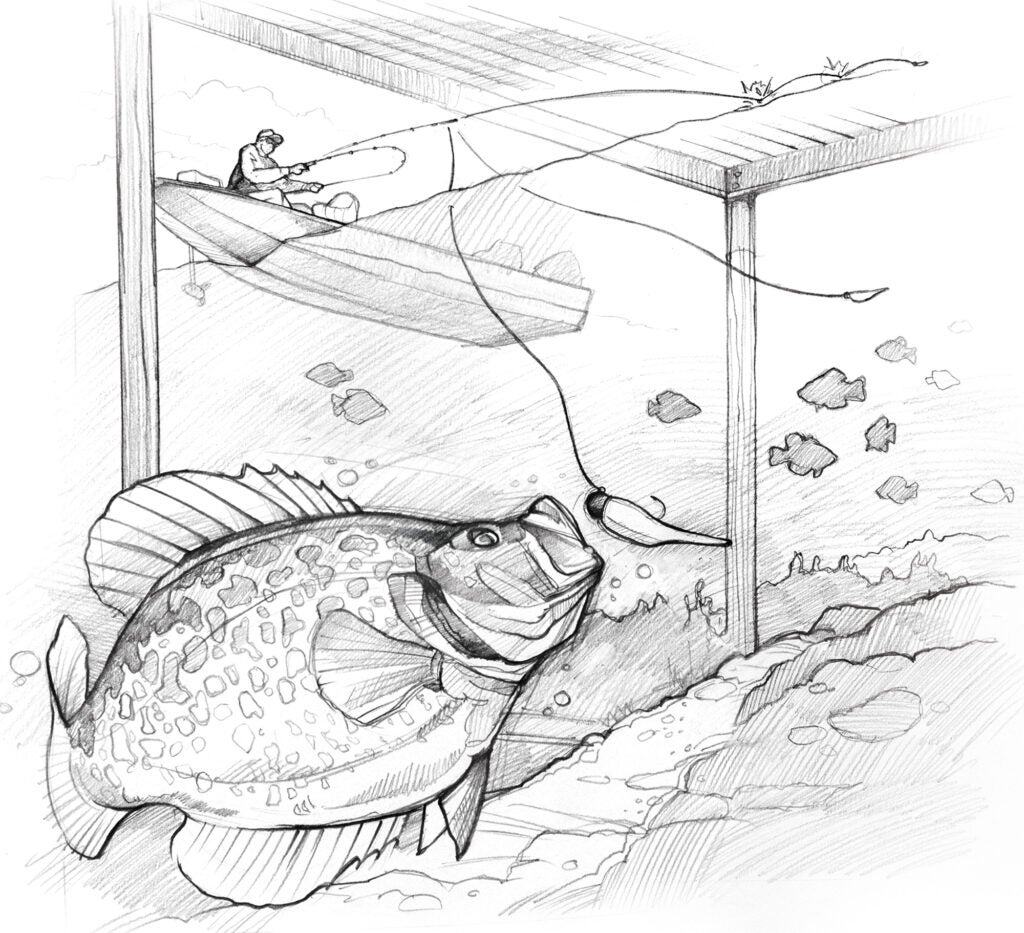 A SHOT IN THE DOCK

Take Aim: Learning how to shoot a dock will get your jig in front of more tucked-up slabs.

➞ The Method If you want to nail Table Rock slabs, LaPoint says you have to learn how to shoot docks, which means using a short spinning rod to slingshot a jig through the narrow slot between the wood and the water’s surface at close range. Think of the jig as the arrow being pulled back with the left hand, and the rod flexing like a bow in the right. LaPoint likes a 51⁄2-​foot ultralight spinning rod for shooting, and he says the key is timing: “You’ve got to be hunched over to get the angle, keep your rod parallel to the water, and release the line at the reel and the jig in your other hand at the exact moment the rod snaps straight (1).” Once LaPoint makes the shot, he’ll keep the bail open and let the jig fall for a count of seven (2). If he doesn’t get smacked on the drop, he’ll reel back steadily (3). “Side-scanning sonar has made shooting docks much easier,” says LaPoint. “I couldn’t catch fish this way without it. I can move from dock to dock and actually see which ones are holding big fish.”

➞ The Jig To shoot docks effectively, it’s critical to use a compact jig, LaPoint says. “Jigs with limp curly tails or thin skirt material have a tendency to catch the water at the wrong angle and sink as soon as they hit instead of skipping. You won’t get as many good shots in the zone with these baits.” His favorite shooter is a 2-inch Bobby Garland Baby Shad in Monkey Milk, which is a transparent white with black flecks that scores for him under most conditions. The rigid body and spear tail skip perfectly, he says, when rigged on a 1⁄16-​ounce jighead.

➞ The Location Rend Lake’s big crappies spend the summer suspending in creek channels up to 24 feet deep, according to Campbell. It’s not until the water drops off to 60 degrees that these fish make the move to brushpiles in 8 to 10 feet of water in cove necks throughout the lake, where they gorge on shad moving shallow to the warmer water. “We call it the feeding frenzy down here,” Campbell says. “When you’re wearing a hoodie in the morning, you know it’s time to go.”

➞ The Method Campbell likes to hop from one brushpile to the next, jigging until he finds one loaded with high-caliber crappies. A 10-foot spinning rod provides enough reach so the boat doesn’t have to sit right on top of the structure, he says, but it’s short enough to maintain excellent sensitivity. “In late fall, I’ve noticed that the bigger fish often want that jig just barely moving, if not dead still,” Campbell says. “When I drop a jig, I’ll let it sit still for 10 seconds. Then I’ll just barely bounce it maybe an inch or two.”

➞ The Jig As Rend’s water is always stained, Campbell ties on a jig with a hint of chartreuse 99 percent of the time. And in fall, he makes it a point to upsize to a 3-inch jig to entice larger crappies. His go-to is the Muddy Water Baits Custom Crappie bait. While a 1⁄16-​ounce jighead is pretty standard for crappies, Campbell opts for a slightly heavier 1⁄8-​ounce head. “It’s more versatile,” he says. “It will be effective in 8 to 10 feet of water, but if we slide to 12 to 15 feet, I won’t have to rerig.”

➞ The Location The funny thing about the fall crappie transition on Weiss Lake—which is widely considered to be the “Crappie Capital of the World”—is that according to Collins, there’s no transition at all. “There are a lot of river channels in Weiss with 10 to 20 feet of depth,” he says. “Those channel edges are loaded with stumps and rows of brush from flooded farm fields, and that’s where you’ll find big fish all year except during the spring spawn.” What does change in November, however, is the crappies’ level of aggression. Sixty degrees is the magic water temperature that Collins says turns Weiss’s crappies from summer sluggish to fall ferocious.

➞ The Method Collins leans on spider rigging to keep his clients on slabs in fall. With a spread of six to eight 10-foot spinning outfits fanned out in horizontal holders across the bow, he can keep live baits suspended at varying depths. Using his trolling motor, Collins works down a line of stumps he finds with his sonar until rods start bending, making sure to troll slow enough that the lines stay vertical. When bites come, he’ll throw a buoy marker so he can keep the boat in place with the trolling motor without having to constantly look at his GPS. “With big live baits, crappies don’t often hang on very long,” Collins says. “That’s why you have to pay very close attention while spider rigging. People lose a lot of big fish because they’re watching the birds or looking off at the sky.”

➞ The Rig Fathead minnows—​­locally known as tuffies—are easy to find in tackle shops around Weiss year-round, which is why many locals use them. Collins, however, prefers large shiners. Their wide profiles and shiny scales give off more reflection as they twitch and squirm on the hook. Collins likens a spider rig to a bass drop-shot rig. An egg sinker is tied to the bottom of a 15-pound fluorocarbon leader to keep the baits vertical. These can range from 1⁄4 to 1 ounce depending on depth, wind, and current. Two feet up from the weight, a 10-inch dropper leader keeps the shiner perpendicular to the main leader. Collins likes to pin his shiners through the lips on a No. 1 long-shank Aberdeen hook.

PRO TIP: A Little Dab Will Hook You

Want to stay in the action longer during a mad-dog fall crappie feeding frenzy? According to Rend Lake guide Greg Campbell, a dab of superglue is all it takes. When the bite is on fire, Campbell says, the average soft-plastic jig is good for 10 to 12 fish before it starts sliding down the neck of the jighead and gets chewed beyond repair. He takes the time to squeeze a little glue on his jighead neck before rigging. “People worry that the harsh smell of the glue will stop crappies from hitting it, but it doesn’t seem to bother them at all,” Campbell says. “I’ll get 50 fish on one jig before I need to replace it. I’ve even had one jig body last through two trips because of the glue.” —J.C.