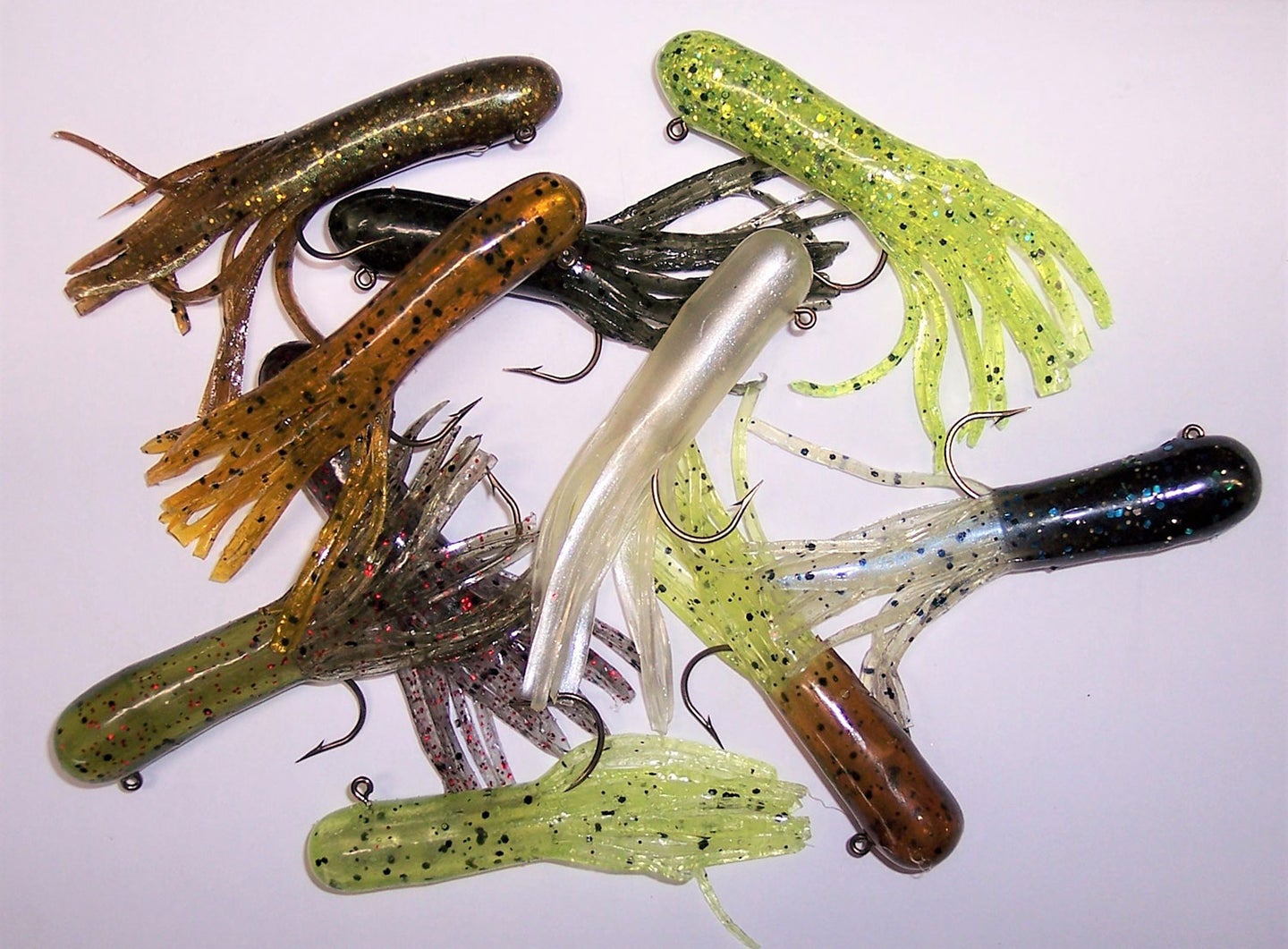 The 9 Best Crappie Lures Ever Made

Every slab-side seeker has a favorite lure that consistently produces oversized crappies. Here are some of the best

Few fish are as notoriously fickle as crappies. Often, for no apparent reason, they choose to hit only a lure of a specific size, shape, wobble, or wiggle. They may stubbornly opt for only one lure color, or a lure sporting multiple, well-defined hues. Other times they want a quick, tight-twitching lure, or one with a wide, slow-wiggling pace. Today it’s a 1/8-ounce lure on the dinner menu. Tomorrow a 1/16-ounce or even a 1/32-ounce is necessary to catch them. Jig size and configuration varies, too. Straight or curly tail? Soft plastic, Mylar, chenille, bucktail, or marabou? They decide. You serve the entree. Figuring what crappies want to eat can be a major headache wherever the fish are found. But the following are among the best crappie lures at consistently putting slabs in the boat.

The unique little Road Runner jig has been around for decades and has a reputation for catching a multitude of fish—especially big crappies. The lure is available in a wide variety of colors. Body configurations vary, too, including curly-tail soft plastic grubs, tube lure styles, and ones with chenille bodies and wispy marabou tails.

The jig also has an oversized hook that makes hooking fish easy. But it’s the addition of a small single spinner incorporated into the jig head of the Road Runner that sets it apart from so many other jig designs. The spinner comes in various colors, in hammered or shiny willow leaf and Indiana blade configurations. The spinners are molded right into the jig head with a quality barrel swivel, which allows for easy spinning and holds up to rugged fishing.

Top Connecticut angler Rich Zaleski is a long-time crappie expert and an adamant fan of lightweight Fin-S Fish grub jigs. He uses a whippy 7-foot spinning rod, 10-pound braided line, and a 6-foot fluorocarbon leader to fish for them.

His favorite Fin-S Fish grub body colors are Chartreuse Silk, White Satin, and Arkansas Shiner. He varies the hues until he dials in the right color for the day he’s fishing. He also trims the front part of a plastic grub so that the plastic is flush to a jig head on the hook.

“I cruise steep banks looking for submerged treetops, which usually are laydown trees,” he says. “I really like spots where a bank has a small landside that includes a vertical tree, some of which don’t reach the surface. I’ll keep my boat tight to a steep bank, in deep water, while watching the depth sounder for brush and timber, and suspended fish near the cover.”

Zaleski would rather find crappies just outside cover because he can catch them easier on a Fin-S Fish using a slow, steady, horizontal retrieve.

“If I have to fish among branches, I’ll try to do it by dropping my jig straight down to the fish and basically holding the jig steady.”

These handmade powder-coated jigs got their start in Wisconsin in the late 1980s, and they are now made in Northeast Florida. They come in a huge variety of colors, in 1/8- and 1/16-ounce sizes, with large-gap quality Mustad hooks that easily accommodate a minnow or soft plastic grub.

Skipper’s models have their roots in the ice fishing world, and they are among the most popular styles for panfishing on hard water. Moon jigs have an unusually smooth half-moon shape, which makes them especially well-suited to trolling. Thus they’re ideal for anglers either spider rigging or pulling lures.

Veteran crappie team tournament anglers Al and Alan Green are huge Moon Jig fans. They have scored well in numerous events pulling the lures in double rigs. Their favorite color is Buttercup. But the best lure hue varies a lot, even during the course of a day’s fishing. They’ll rig a wide range of Moon Jigs off multiple rods, making sure they cover the color spectrum from orange and chartreuse, to pink and white.

Top angler and Mississippi crappie guide Brad Chappell is a huge fan of long-line trolling with tandem-rigged jigs. When fish are suspended in shallow water, he opts for 1/24-ounce models. When fish are deeper, he’ll tandem rig the same jig, but increase the weight to 1/8-ounce.

“Color is important for crappies, of course,” he says. “And I try different ones until I get the right color that fish want that day. My favorites for StrollRs’ are Keystone Candy, Bluegill Fire, Grenada Gold, Purple Passion, and Double Silver Rainbow. I make sure the Mo’Glow heads I use with them are a totally different color than the bodies.”

Chappell says the StrollR is a deadly grub body because it gives off a lot of vibration through its tail, which attracts crappies from long range and triggers them to strike.

“My favorite way to fish them is long-line trolling at one mile per hour, and I always use them in tandem, rigged about three-feet apart. Mississippi slabs eat them year-round.”

Read Next: The 8 Best Live Bait Rigs for Crappie Fishing

Even an untrained eye can recognize the lifelike quality of a rigged swimbait. This lure is essentially a jig, but its distinctive head and soft-plastic wrap over the lead makes it a crappie lure like no other.

Swimbaits are dead-ringers for real baitfish, and they offer a unique lure profile to predator fish. The lure also tends to maintain a horizontal attitude when fished, which best mimics a suspended minnow. They are available in a variety of colors, and virtually all have a vibrating tail that draws fish. Swimbaits have taken hold of the bass fishing market in a big way, yet for panfish, and especially crappies, they are deadly, too. Many companies produce swimbaits, but those with smaller sizes in a wide color selection are available from Storm and Berkley.

Bobby Garland introduced the original Gitzit tube lure in 1964 out of his home in Utah. The little 2½-inch hollow lure with 35 or so wiggling tentacles quickly made a name for itself in clear, deep Western reservoirs. Fished with light line and an exposed hook with an internal jig specially designed for the lure, it quickly racked up bass.

But tube jigs also have proven deadly for many other species, including crappies. In fact, Mark Williamson used a tube lure in March 1998 to secure an IGFA world 8-pound-test-line record for black crappie from Lake Logan Martin, Alabama. The fished weighed 3-pounds, 10 ounces.

Small, lightweight tube lures perfect for crappies are made by Gitzit in Utah. A number of other companies make tubes, including Jawbone Tackle, Strike King, Big Bite, and others. Bass Pro Shops, Cabela’s, and Academy sell crappie-sized tubes, as well as tube lure kits with a wide array of jig weights and soft plastics in a rainbow of hues.

Mini-tube soft plastic lures come in many sizes from 1½ to 3 inches long. Jigs designed specifically for them also are available in many weights. Tube jig weights come in 1/64-, 1/32, 1/24-, 1/16- and 1/8-ounce sizes making them useful for virtually all casting and trolling crappie techniques.

This superb and innovative balsa-wood plug has been around longer than most anglers who fish it. Over the years, it has racked up a remarkable number of huge fish, including at least two IGFA record crappies.

Both fish were black crappies, the largest setting a world 12-pound-test-line record for Sherril Harris in March 1984 with a 4-pound, 4-ounce slab landed from Alabama’s Paint Creek, off the Coosa River. The second record was a 2-pound IGFA mark weighing 3-pounds, 2-ounces caught by Max Tongier Jr. in August 1986 in Virginia’s Chickahominy Lake.

The Rapala comes in many colors and sizes suitable for crappies. Lifelike baitfish colors are preferred by many slab seekers, who opt for lure sizes in the 1½-, 2-, and 2¾-inch sizes.

Because the lure is very light (down to 1/16-ounce) due to the balsa wood, scaled-down crappie tackle must be used to cast small Rapalas well. The lures run straight and true with a lifelike wiggle and are ideal for trolling.

It’s possible that the simple, basic marabou jig has been used to catch more crappies in more places than all other lures combined. The lure is inexpensive and almost impossible to fish incorrectly. Moreover, it’s available almost everywhere, especially in those off-the-beaten-track bait and tackle shops near fish-rich waters where crappies are king.

Marabou jigs designed for crappies have been around for generations, and they still catch fish in big numbers today. They’re available in dozens of colors, and color combinations, with the basic style pretty much the same – ball-head jig, chenille-wrapped body, holding a tuft of fish-attracting marabou feathering at the tail.

Many such jigs have a tri-color appeal, with the head one hue, the chenille body a second color, and the marabou tail a third shade.

Whether they are trolled, cast, or pushed via spider rigging, marabou jigs have scored big everywhere crappies are found, and they’ve caught IGFA world record fish, including a massive 4-pound, 8-ounce black crappie taken in March 1981, which set the 6-pound-line class record for IGFA. It was boated by L. Herring, Jr. from Kerr Lake, Virginia while drifting.

The in-line spinner has been around for a lot of years, and has been responsible for putting countless crappies into boats and buckets throughout the country. In-line spinners are available in hundreds of configurations with varying spinner styles, bodies, blades, colors, and trailers.

Time-tested favorites include the fabled Mepps Black Fury, Worden’s Rooster Tail, and Panther Martin. All are available in lightweight models, ranging from 1/32- to 1/8-ounce. But they’re built tough and can handle repeated casting, retrieving, and catching of fish. Most come with a small, sharp treble hook, but they can be modified to a single longer shank hook, which allows for adding a minnow to the lure.

In-line spinners have accounted for plenty of heavyweight crappies, including the one-time IGFA 12-pound-line-class white crappie weighing 4-pounds even. It was caught near Rome, Georgia in Mar. 1980 by Ken Wright on a Mepps Black Fury.